For the last three summers, anyone with an eye on the internet has been treated to the two-wheeled antics of Colorado’s Nate Hills and his #followcamfriday YouTube series. Now already past its 120th episode, the series has essentially defined a new genre of mountain bike filming: chasing your buddy down a gnarly trail at insane speeds, trying not to hit them or the trees flying past you. The series has brought Hills all over the world, from Whistler, to New Zealand, Bolivia and even through TGR’s own backyard on Teton Pass filming episodes with some of the best riders in each area.

We caught up with him as he was packing his bags to head back to New Zealand for a few weeks of warmer weather and some racing and chatted about what it takes to make the magic happen.

Where did you get started with biking?

I’ve been racing bikes for 13 or 14 years now, I basically got into it as downhill racer because that’s what always appealed to me. I had a pro DH license for years and was really passionate about that avenue of the sport. From there, I started racing a ton of XC and Enduro. I really enjoy the community aspect of it all, much like the ski community. The culture, the good people, that’s what it’s all about.

With that, I’ve always been a racer, and still love to compete. Of course, I don’t really have much to prove on the racing side anymore, being 40, so now it’s more about the experience for me and being part of that whole scene and promoting it through my own channels and getting people stoked.

The slickrock playground of Bartlett Wash, Moab is one of Nate's all-time favorite places to ride.

So with your focus now away from racing, did that lend itself naturally to filming?

To me, filming is not so much a replacement for racing as something that is complimentary. It was really a way for me to give more value to my partners and sponsors. Being an aging and older racer, I’m not going to win any more World Cups, so I needed to figure out “how can I reach all these other people outside of the racing world?” Filming was really the natural answer, and I’ve been able to reach this entirely new audience through my YouTube channel. As an athlete nowadays, you have to make all your own content, so I really just embraced that and am having a ton of fun with it!

There’s a ton to learn for me still, so I’ve looked to the likes of Joey Schusler for inspiration, especially his way of going about racing and transitioning into filming. Offering that brand of “we do everything” is kind of the direction I wanted to move in, and that’s where #followcamfriday came from. 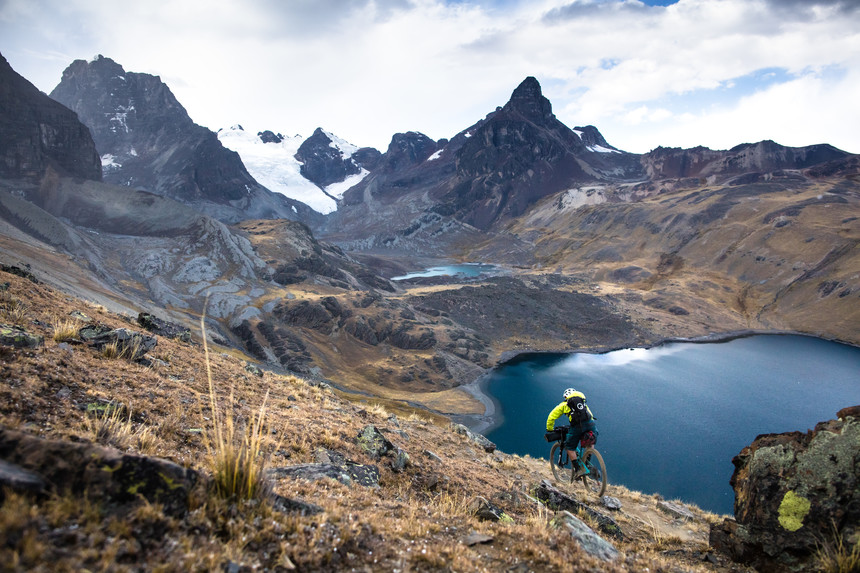 Nate's career has taken him all over the world, and his desire to travel by bike is exactly what drives him to do more. Joey Schusler photo.

Was that hard to do in the beginning?

I have no formal education when it comes to film production, so I kind of just figured it out as I went along, trying a bunch of different things and basically got the formula that I liked. It seems to have taken off, huh? I’ve always been surrounded by people that are motivated and actually really good at filming, and by working with them I kind of picked up the skills I needed.

What’s the process to creating an episode?

I try to keep everything not too thought-out or premeditated. I want to keep it pretty real and on-the-fly, which translates to a better end result for me. I travel full-time for racing, so I’ll take a couple of days before or after a race and shred local trails with new friends I make. It’s pretty organic for me, I’ll meet somebody who says “let’s go ride this” and I’ll just bring the setup and make it work.

I definitely need to ride with someone a little bit before we film, to learn to trust them. It’s like backcountry skiing, you won’t just go do it with anybody right? That risk assessment is kind of similar to me.

If it looks close on the camera, I’m basically buzzing someone’s back wheel. Sometimes I can’t even really see the trail at all, I’m just reacting with my body to what their body is doing in front of me. It really is kind of dangerous. So, I have to have some level of confidence in someone’s ability before I’ll drop in with them.

I’m on season 3, so just over 120 episodes so far. It’s hard to say what my favorite is. I’d say Bartlett Wash from Moab, because it’s so different with that alien landscape and a natural slickrock skatepark. The ones that have the most views aren’t necessarily my favorites. I really do like the episode I did on Lithium in Jackson, and to be honest, its more about who I’m riding with in each episode. I feed off that energy and it what makes me really enjoy making these videos. Knowing that, I really like one of the first ones I ever did, with Kyle Mears on Porcupine Rim. He was really on one that day, and I still remember that run vividly.

TGR's backyard of Teton Pass is home to some gnarly singletrack; of course it was given the #followcamfriday treatment.

That’s kind of the theory with these: find the fast local and try to get a peek into how they ride and the lines they take. It’s really cool to do that all around the world and meet different people and see different styles of riding.

Let’s talk tech, what equipment do you use and why?

I film everything with a GoPro hero 4, which at this point is an older model. The reason for that is simply based on audio, it’s so much better than the 5 and the 6. The microphone on the new ones is physically in the way of the gimbal, so it translates to scrappy audio. The sound is bad enough when you’re out riding fast with wind noise, so I use a little deadcat to cover the mic. So I’m sticking with the 4’s until someone does something better on the audio end of things.

I run an EVO Gimbal, from the guys over in Bend, OR. I had a ton of bad luck with all the cheap Chinese gimbals, so I reached out to those guys and told them what I do. Lucky for me, they started floating me some gear and now, I run the GP-Pro Gimbal. It’s a little different from your typical wearable gimbal, it has a battery stick coming off the bottom. I have a second attachment strap that goes just above my belly button to hold the battery arm. It’s a little beefier, but the footage comes out a lot better thanks to bigger motors on it. It’s a little weird to ride with, but for me the better footage is worth it.

La Paz, Bolivia was an interesting choice for mountain biking, but Hills and his good friend Joey Schusler laid down the style in the urban playground.

It really comes down to 4K. On Youtube every video I have ever put up has been shot on 4K 30FPS, and the Youtube algorithm has a bit of favoritism towards 4k footage. So by me posting in 4K, theyre more likely to promote my work, because that’s where they want to see the quality of their platform. Additionally, for Instagram use, I can crop super hard and move stuff around. Unfortunately, no 360 cam exists that can shoot 4K well as of yet, so I’m going to wait for the technology to catch up a little.

What about the bikes you ride?

I ride for Yeti, and those guys have been amazing to work with. We’re a really good fit, since they’re into promotion far outside the racing world and really support roadtrips and adventures. They’re super hardcore about racing, but as far as bike companies go, nobody has built a community like theirs that just celebrates biking as a whole.

I keep going and forth between the SB5.5 and the SB5, but right now I’m most stoked on the SB5 with its 27,5 wheels and five inches of travels. It's so playful! Actually bringing it down to New Zealand for the next few weeks and I’m excited to go beat it up down there.