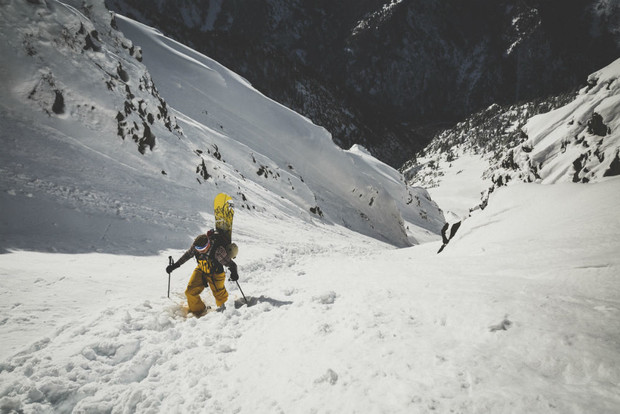 It's couloir hunting season. Before you start booting, ask yourself if you're actually ready for everything it could throw at you. Are you thoroughly prepared? If not, veteran backcountry snowboarder Maxwell Morrill clues you in to the top five things you need to have dialed before you begin climbing.

#1: Prepare your logistics and your mind

Do your research about access, aspects, and runouts, and collect as much route information as possible. Hillmap photo of Lone Peak Wilderness.

Don’t just show up and hike. Pick out routes in advance, varying them by aspect. Start collecting beta about the route. What kind of climbing techniques, gear, and snow conditions will it take to top out and ride down safely? Does the chute you want to ride see sun and, if so, during what time of day?

The timing, Morrill explains, is everything. The day you set out to hike up a couloir, leave as the sun is rising.

Your mental game is also a huge part of the equation.

“Personally, you have to be ready mentally,” Morrill says. “Climbing up these things can be scary. If the couloir is getting sun at the top and you are getting shade, it could slide, and you’re done.”

#2: Learn what's going on with the snowpack

The avalanche forecast is only the tip of the iceberg. Stay abreast of when each aspect is cycling through. Utah Avalanche Center photo.

Snow conditions play a pivotal role when you are planning to hike and ride a chute. Pay attention to the snowpack on each aspect, and think about not only how stable the snow needs to be but also how filled in it should be.

“A chute can change quickly from the beginning of the month to the end, especially if there’s been rapid warming,” he explains. “If the sun gets on it, the snow will react differently than on a chute that doesn’t see sun. If it’s been warming and refreezing, it could be bulletproof because it’s cycled through. You could top out without incident.”

#3: Work on your fitness 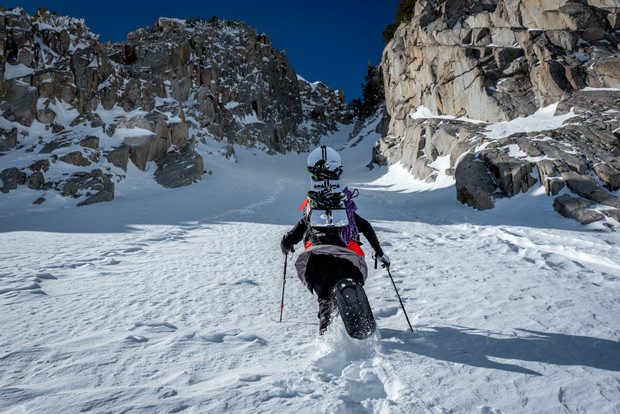 Climbing straight up with Verts expends more energy than skinning a gradual ridgeline. Rest accordingly, and identify zones of safety on the way up. Michael Aasheim photo.

Chuting requires a greater energy expenditure than a normal day tour. You might start out skinning and kickturning, but eventually you will be kicking steps the whole way up the chute. Your fitness dictates how often you’ll need to stop and rest. If you push too hard, you risk not being clairvoyant enough to notice places where you can take yourself out of potential hazards like slough and wet slides.

If you’re climbing in a group, try to pace. Morrill suggests each person taking a turn setting the bootpack, then rolling to the back of the pack like an indian sprint.

“Depending on approach, sometimes you’re booting right from road and going straight up,” Morrill says, “or it can start with a longer, skin approach. Your climbing techniques will vary with snow depth, and the condition of couloir.”

As you climb, know when to transition within your accoutrements of gear, he recommends. 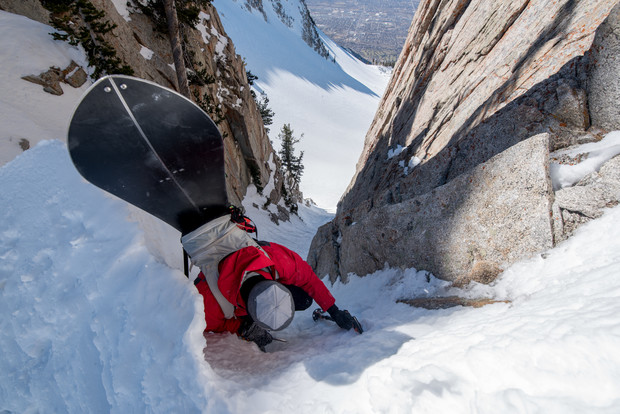 “Sometimes I’m climbing with Verts, a whippet, and my board on my back,” he adds. “Sometimes I’m using an ice axe plus whippet. Sometimes it’s two ice axes plus crampons.” 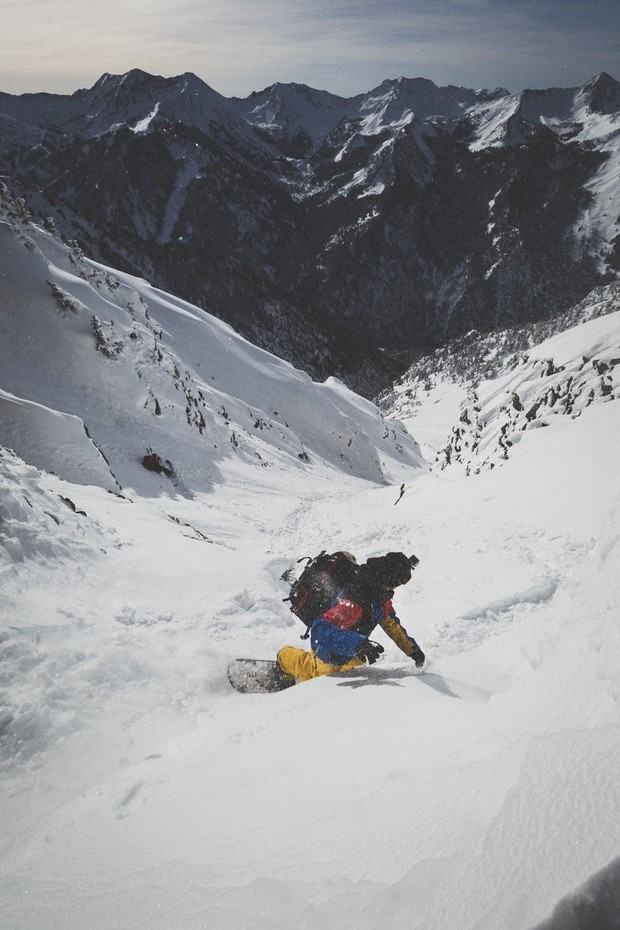 Wide, lower-angle couloirs don’t require as much technical snowboarding skills as a steep and tight one do. As you push toward dropping into more challenging terrain, have both your turning and rope skills dialed. Certain couloirs don’t fill in entirely, Morrill explains. “You may need to downclimb or rappel over exposure one-footed or with your snowboard on your back,” he says.

Before you ride down, identify zones of safety where you can pull out should snow start to move. Do not stop mid-descent outside of a safe spot because your slough can take you out and carry you the length of the chute. 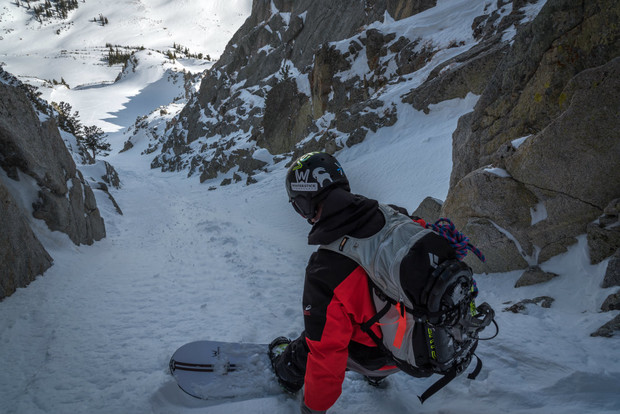 Because you have less ankle flexion on a heelside turn, it's more challenging to hold that edge on steep, icy terrain. Michael Aasheim photo.

“What’s really hard for snowboarders is we are on one edge,” he points out. “If you blow a heelside edge, you will immediately start sliding. Toeside edge is a better edge. Eventually you need to get to your heelside edge. There’s a technique on steep, 50-to-60-degree couloirs, where you need to get from toe to heel and jump turn.”

Really good article! Finally, someone acknowledges that the steep heel side turn is our nemesis. There’s actually a ton of technicality to “not” losing one’s edge on steep firm terrain. A massive component to it is to get as low on your board as possible… I.e. Really tuck / fold your legs under you. If you’re too straight legged, your knees hips and ankles are too stiff, and you can’t “feather” that heel side edge pressure. Another big part of it is to actually use ample amounts of forward lean on your bindings. Because of the massive freestyle / park influence in snowboarding, most riders either never knew about forward lean, or forgot about it. For big mountain riding, trust me, tons of forward lean is your best friend! Also, if you’re riding with an ice axe, you can actually drag the head of the adze through the snow in your front hand, on steep / firm snow heel side turns. This is more of a French technique that they use in the Alps a lot, buts it’s definitely saved my life.

Thanks for the quality morning read TGR!!

Hi friends it is so great game play free steam cards like to be a best game.