For Sage Cattabriga-Alosa, this past season was one of discovery and pushing the boundaries of skiing. In reality, that's nothing new. Sage has been in the game longer than just about anyone on the TGR crew, but his skiing is as youthful as ever, and still continues to bring about new experiences. This year, Sage traveled from his home in Bend, Oregon on two vastly different adventures: a BC camping mission and a foot-powered spring mission exploring Norway’s Lofoten area. 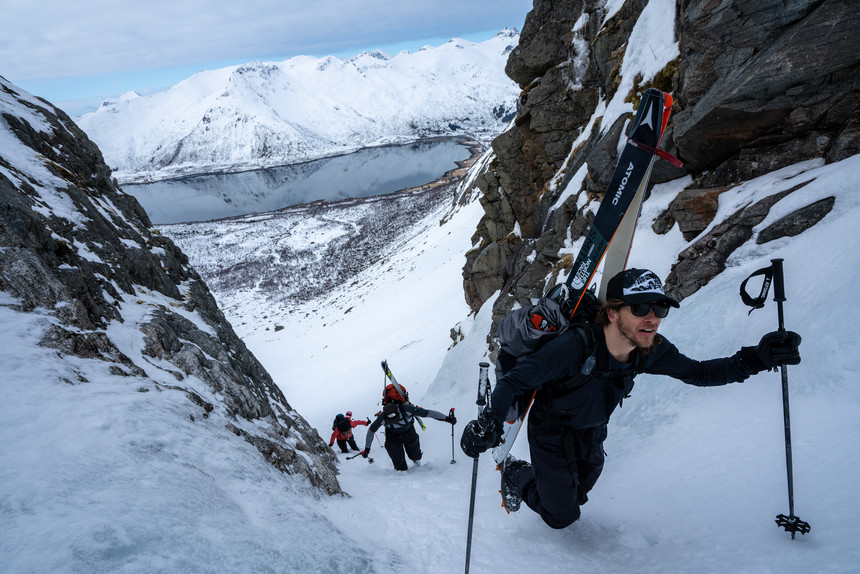 Sage has been leading the charge for over a decade, what was new for him this season? Ming T. Poon photo.

TGR: Tell us a little bit about Norway. It’s an area with a rich skiing history, but you’ve never been. How was exploring a new zone with friends?

Sage: Well, I’ve been going to Alaska for 15 years now with TGR, so it was pretty cool to experience something completely new. Mac and I were planning an Alaska trip, but that fell through, so we were stoked to be invited to Norway. It’s such a unique place with such a rich skiing history and really different terrain. Where else can you ski directly to the water and have ocean views no matter where you look? 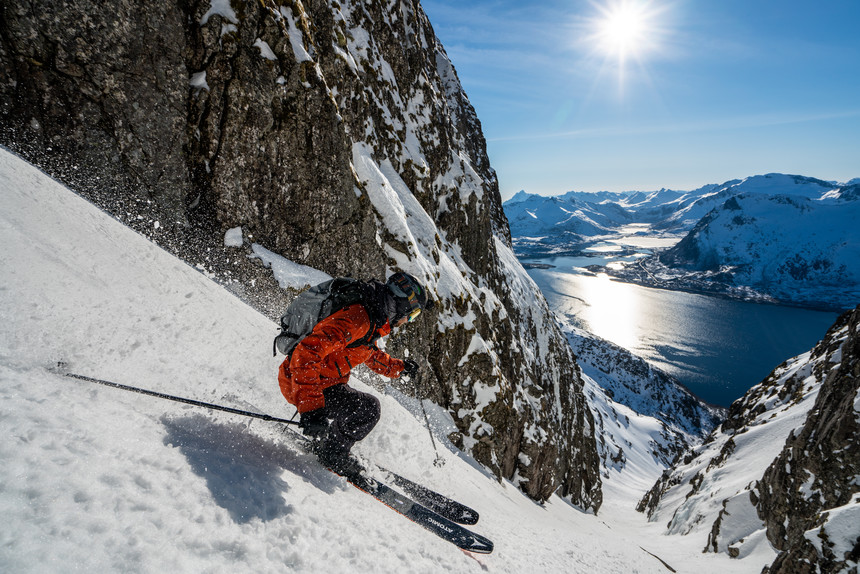 TGR: How was working with this crew on the mission? The snow looked less than ideal, but you guys made it happen.

Sage: Spring skiing is just one of those things, man. It’s a roll of the dice between stability and snow quality. When we showed up, we thought we had timed it perfectly. The snow got stable a few days before we came, which is normally a sign for go, but the spring showed up really early in Norway this year. A few days after we showed up it got really hot, and any precip that came down came in the form of rain. It was challenging, but given the access and the sheer amount of lines around the Lofoten area, we still managed to get some really great skiing in.

TGR: There was a new member of the team with you, Christina Lustenberger, what was it like integrating a new member into the team?

Sage: I had never skied with Christina before that trip, but we quickly learned how amazing she is. In reality, I’ve been making it as a pro skier for most of my life right now, but Christina is so much more pro than me. She’s a mountain guide, and that really shows through in terms of professionalism and being a leader in the mountains. It also helped that she had been to Lofoten before, so she knew the area quite well. Besides, she’s so fast on the uphill! It was really hard to keep up with her while hiking. 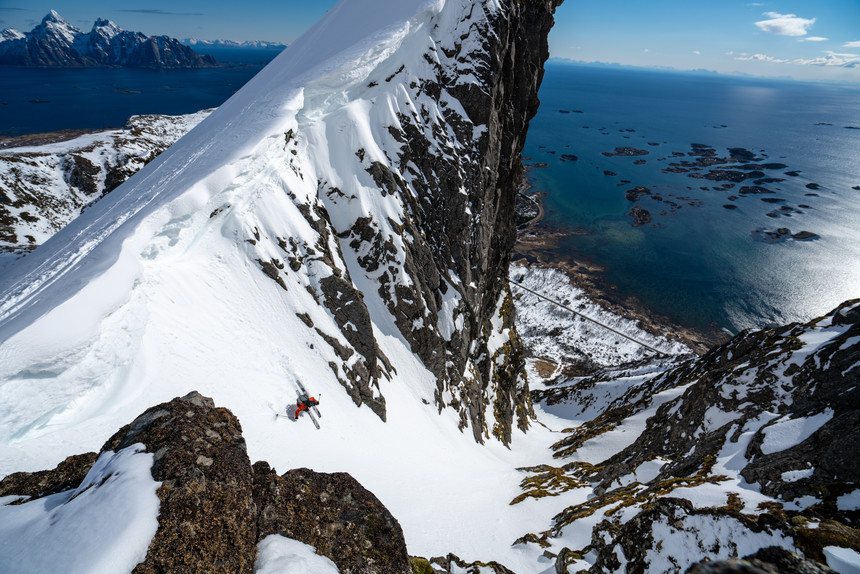 Couloirs that drop all the way to the sea? Yes, please. Ming T. Poon photo.

TGR: BC camp looked like an epic, yet completely different, experience. How did that idea come to be?

Sage: I’ve been doing it for a few years now, and I really love that experience of camp life. Last year, we went on a similar trip in the Stellar Heli tenure, where a heli dropped us off in this insane zone with a super-cozy camp. This year was similar, and Stellar really made the experience by installing a walled tent that served as the main hub of our base camp. We had a little more practice now that it was our second round in those mountains. From camp, we were able to ski just about anywhere our legs could take us, which included everything from couloirs, ridgelines, pillows, and awesome treeskiing.

TGR: How do you keep your sanity while suffering in such a hostile environment like a winter camp?

Sage: Suffering? It seems pretty easy to me! There’s moments where you’re cold but it’s not that bad. My advice is just have some means to be warm and take care to keep your stuff dry! In all seriousness, it was awesome that we had such a flexible crew and good conditions. It was really cold, like -26 cold, but just hang out in your sleeping bag until the sun hits you. That’s the beauty of being out there: the skiing is literally right outside your tent door. 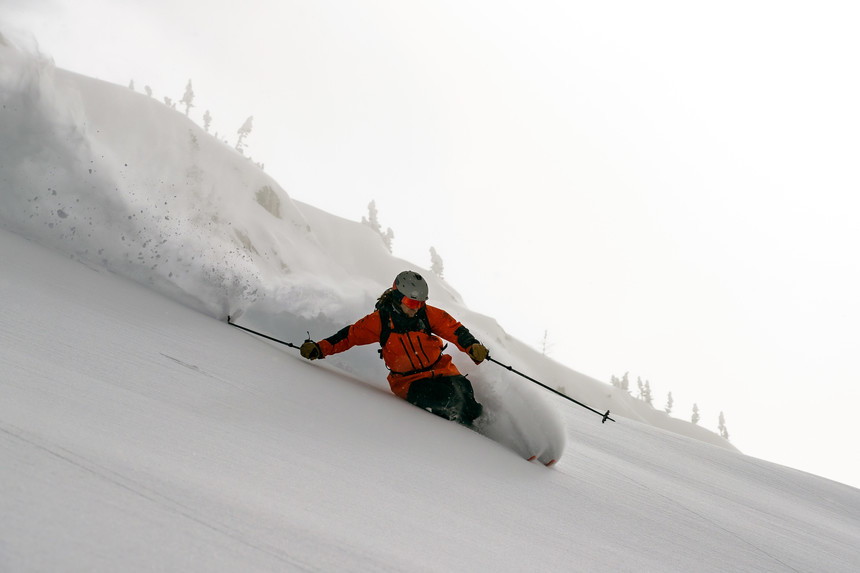 Carving turns in deep BC powder is something we can all get behind. Jeff Cricco photo.

TGR: What was your favorite line this year?

Sage: I would say my favorite line was the Subway Couloir, this little line I hiked to from our BC camp that had an overhang I had to straightline under. I saw it early on from camp, but its so hard to judge scale in those mountains. I thought “could a human being even fit in there?” so I had to go find out. It took my three tries to even get up there. I had to hike this crazy knife-edge ridge to get up there, which was covered in deep unconsolidated sugar snow. Definitely spicy! One morning I just got up early and finished the hike. Standing on top, I was like “ok sweet, this thing goes!” and dropped in. Straightlining stuff like that is probably my favorite thing to do on skis.

TGR: How about your favorite non-skiing moment?

Sage: The thing about all these trips is that the whole experience is always so special. The skiing is usually great, but hanging out with friends and experiencing new cultures together is really the best part. Norway was so different from anything I’ve ever done. The vibes of cruising around on boat checking out the terrain was definitely the highlight there. The coastline going up to the snow was like a fantasy world. It was cool to see that soccer field on the island that’s all over Instagram. Also, our basecamp at the Lofoten Ski Lodge was so comfortable and welcoming, it’s a super rad spot with rooms right on the water, and you’re poised to ski anything you want in the area. 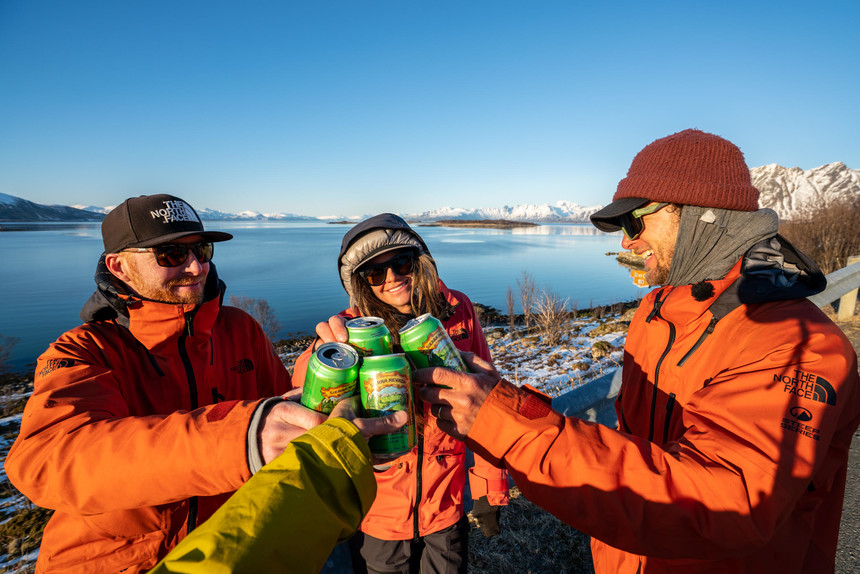 Great story! I also love norway and not only for skiing :)