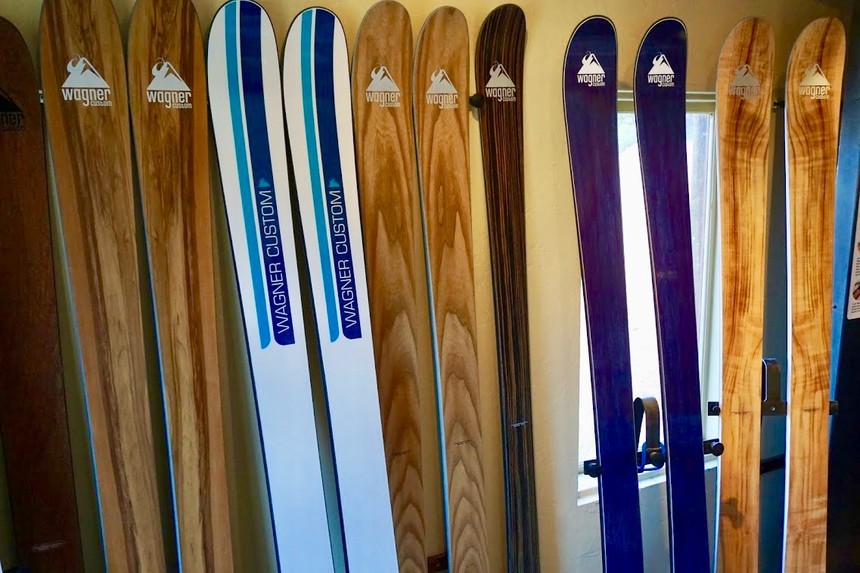 For an average of $2,000 a pop, you can bet Wagner Custom Skis look pretty AND ski pretty. Tara Yant photo.

I’m not a fancy person. My dinner’s often just an extra large snack, I wear hand-me-downs from a cousin twice removed who I’m pretty sure lives in a desert cave, and if I ever survive a relationship long enough to honeymoon, I’d simply pitch a tent on some moss in the woods.

But while I don’t understand things like caviar (let’s go ahead and leave that in the fish), as a ski patroller who attaches skis to her lower limbs for half the year, I do love me some swanky snow planks. In other words, I was fully down to get my fancy on when I was invited to spend a long weekend alongside Pete Wagner of Wagner Custom Skis in a rental house in Telluride, Colorado, that the Justin Timberlake stays in for a casual $100,000 per month.

Enough about JT (and the fact I may have touched and/or licked every faucet simply because his body might have been there). I’m here to talk skis. 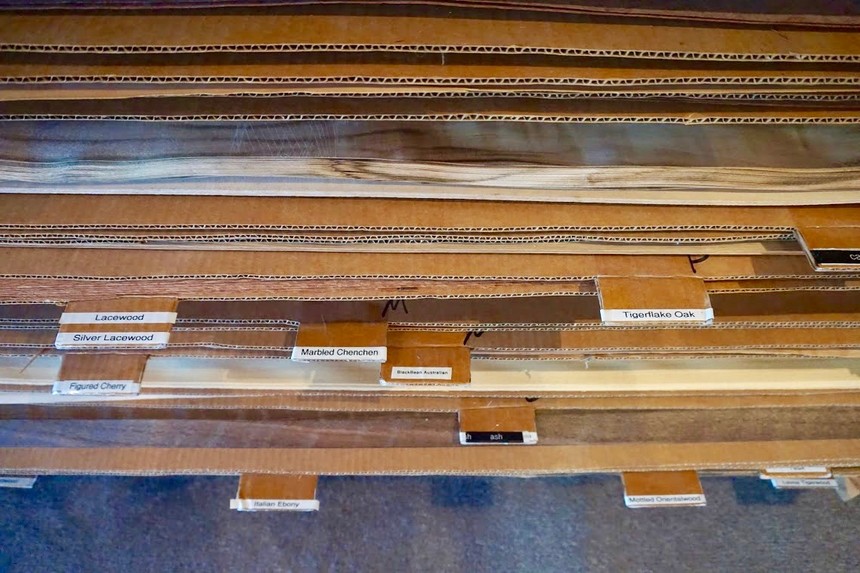 Core galore! Wagner's stocked to build whatever ski or board will work best for you. Tara Yant photo.

There are skis and there are skis, and Wagner makes the latter. The 40 years young Mechanical Engineering grad began his career designing high-tech custom golf clubs. Allowed to work remotely, Wagner chose to hunker down in Telluride, but in doing so, his attention drifted to skiing. Golf got the boot, and he spent the next seven years developing more than 300,000 lines of code for what would become Wagner’s Skier DNA Software.

Wagner’s software effectively flipped the bird at mass producing soulless skis. By 2001, he had cracked ski-making (his secret: analyze the individual) and took his software to the handful of big name ski companies out there.

Here’s the thing: None of them cared about his new code. They pretty much scoffed the concept. 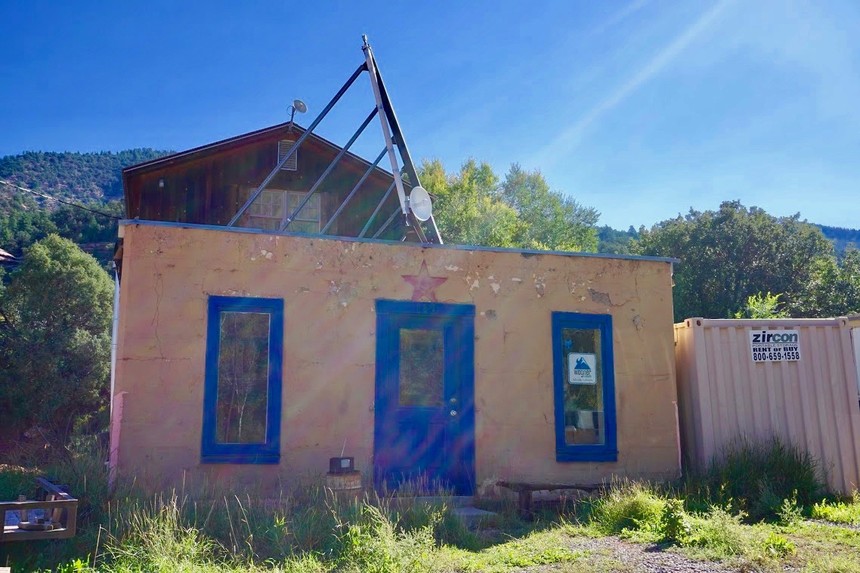 Charged up, Wagner decided to grow his own ski manufacturing business. His model was basically that of the race room (that little shop in big factories where they custom-make skis for top racers) but for recreational skiers. He had the software, an M.B.A., and an advisory board that included David Jacobs of Spyder. Fast forward three years and Wagner was cutting the ribbon to his first factory, a recycled gas station heated by six solar panels.

“Back then, everybody had to go to China to get skis built, and in the first year we got all this work just building skis for other brands who were okay with paying more if it meant being made [in America].” Wagner says, “Nobody knew what Wagner Custom Skis was, but we got a bunch of work, and that gave us a bunch of cash. We sort of learned how to build skis while getting paid by other people.” 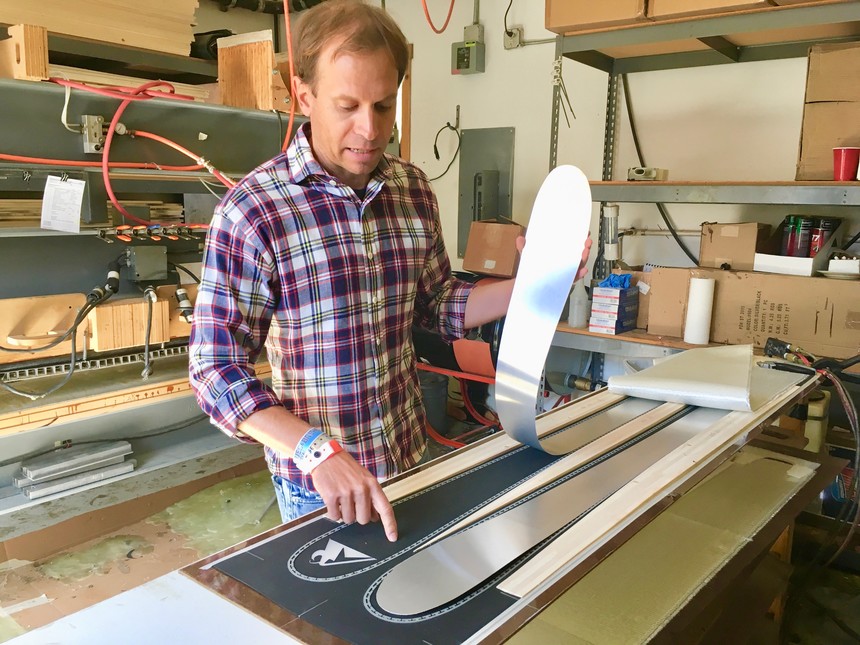 Wagner Skis predominantly have wood cores, but if metal's best for you, metal's what you'll get. Hashtag practicality. Hannah Clayton photo.

Wagner's early commissions were key to exposing his brand. He says, “Starting out, nobody knows who you are, and why would you take a risk buying a more expensive product if nobody’s ever heard of you. We were fortunate because we had some early adopters who were willing to give us a shot.”

You may wave your fists in a flurry when you learn Wagner’s wooden-core skis start at $1,750, but stop right there. Ease those fists. These skis aren’t born of molds, but technology and craftsmanship. Each Wagner product varies in length, width, sidecut, tip/tail shape, rocker/camber profile and material composure, depending on the stiffness/flex you’re after. The whole thing may sound like a crazy science, but Wagner’s quick to say his job’s an art. Ski-making’s all about design. 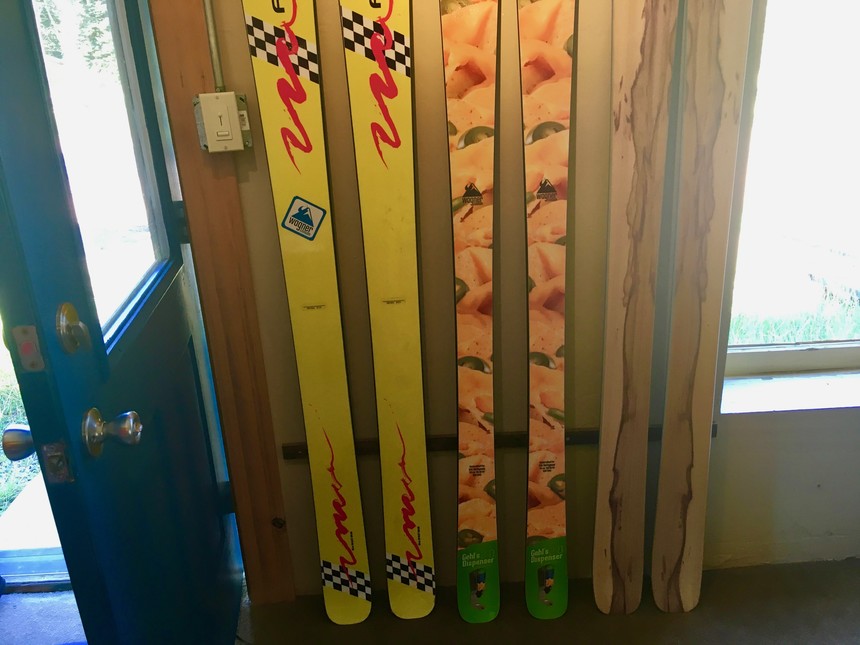 Wagner says, “From the beginning, we were like, ‘Yeah, we’re gonna own this…we’re gonna develop this technology that’s good enough so that it works. Other ski companies say, ‘Well, why would you want to buy a prototype ski?’ But that’s not what we do—what if it sucks?”

Wagner’s method might not epitomize perfection, but he only had to rebuild four of last year's 1500 pairs of skis, and that suggests his manufacturing's dialed. He’s even got an in-house graphic designer who’ll help you make your topsheet. One skier chose nacho cheese for his topsheet, placing cheese dispensers on each tail. Another opted for a raw bacon snowboard, scanning Wagner the meaty strip from his local library. Wagner went one step further, substituting bacon grease for the wax on the sidewalls. Not only did his client’s snowboard look like bacon, it smelled like it, too. 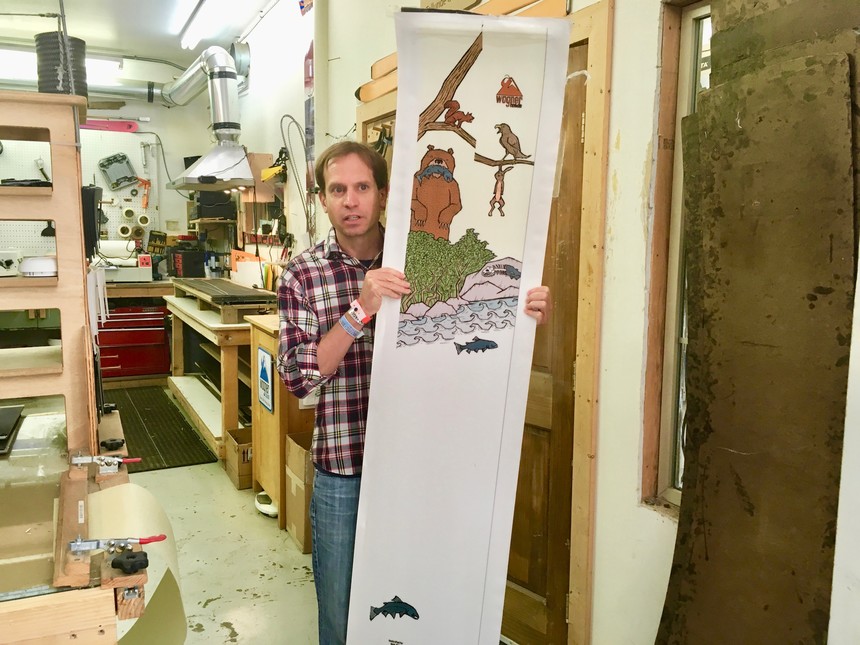 You could be an ostrich babysitter in South Africa (that’s a thing) or an official elephant dresser in India (that’s another thing) and Wagner will design you your choice of skis or board. Your purchase also gets you a day pass to Telluride, half privately guided. With his partner, Telluride Rentals, you can also put together an entire trip. For however much you’re willing to drop, the duo will arrange housing and outings, including backcountry adventures.

Wagner Custom Skis is relocating in November to a ski-in/ski-out location within ski-boot-walking distance of Telluride Helitrax, a heli-skiing operation. Their new digs will be fishbowl-like to encourage customer interaction, and they’ll be keeping their funky DIY machines (one makes use of skateboard wheels, others incorporate duct tape), as well as their recipe cards—cards that list each person’s skis’ ingredients and hang above the workbenches, restaurant-style. 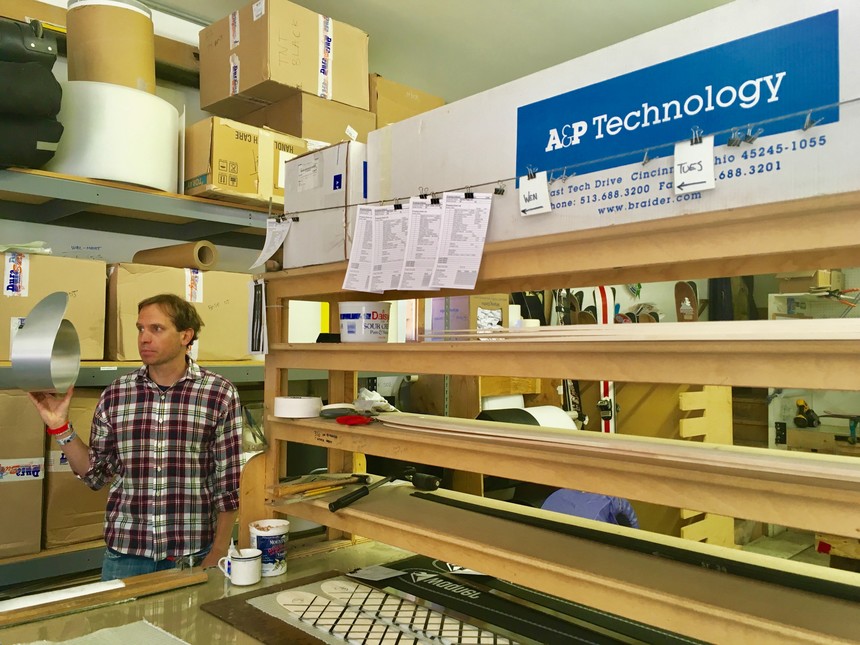 From initial concept to successful product, it takes under twenty-one days to make a pair of Wagner skis, but this efficiency by no means suggests sloppiness. Wagner says, “The expert hands that work here—they live and breathe skiing. Our philosophy is to treat the equipment we’re making as if it were our own. We’ve got an attention to detail you’re not going to find in skis that come off a line in Eastern Europe or China.” 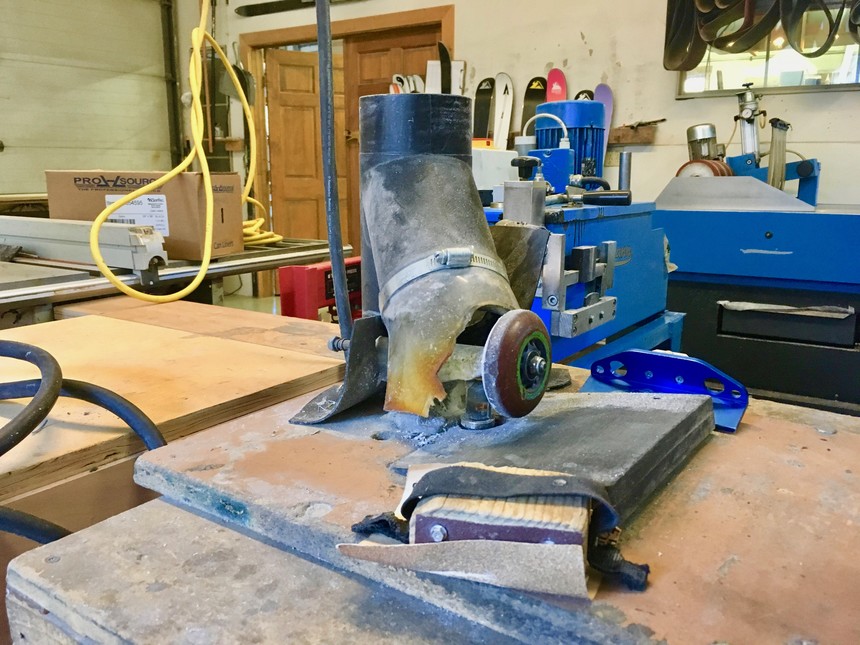 Wagner’s skis reap such praise that SKI Magazine invited them to their ski test this year. Reserved for the likes of K2, Volkl and Atomic, Wagner Custom Skis was the first indie brand to partake. Wagner went solo, and after dropping off his demos, he went to work in a coffee shop. He says, “I started talking with a ski designer from one of the big brands, and he was blown away when he learned that in that day alone, I’d designed eight pairs of skis. That’s more than the company he works for had designed over the year.” 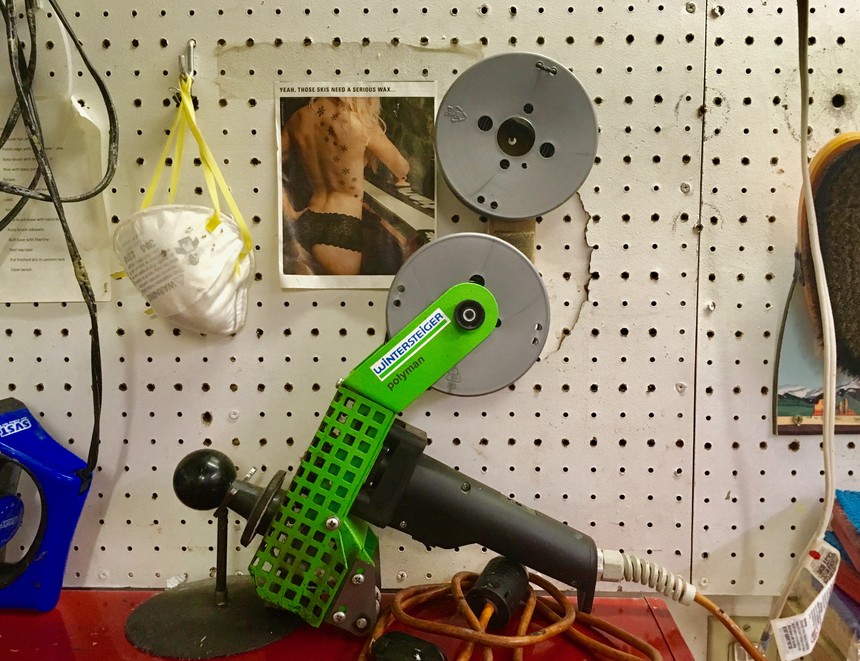 Wagner’s streamlined his Skier DNA Software. No longer eighteen pages, the questionnaire lasts a painless three minutes—all you hand over are your height, weight, skill level, age, gender, terrain preference, and a few words on what you’re looking for in your equipment. After, you chat with an employee to figure out what’s going to work best for you, and then with the graphic designer to discuss topsheets. My topsheet will harken back to my roots: England vs. America. The Queen’s face WILL feature. 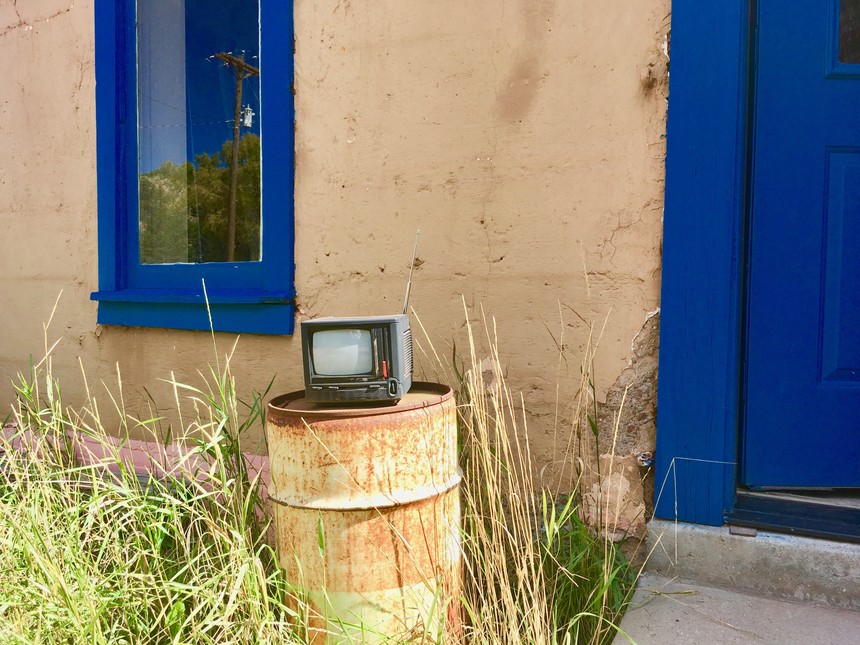 I’ve been loyal to Tahoe-made skis, but I’m ready to give another indie company a shot. I’m also ready to once again show my fellow patrolmen that customized skis are the way to go; properly fit planks are similar to dialing in your ski boots: they help your balance, control, power and efficiency. They make you less of a Jerry, and more like Lars and Silas Chickering-Ayers, two freeride legends who ski Wagners them very selves.

No pressure on Wagner or anything, but I anticipate feeling like a unicorn atop my made-for-me-and-me-only all-mountain skis. Keep posted for a performance update, come snowfall.

what about a baller baller ski, for ballers with baller ass graphics

I have to call bullshit as well.  Haha! “Wagner’s Skier DNA Software”... Total BS.  I’m a mechanical and automation engineer and ski/snowboard 60+ times a year and I’ll tell ya:  “It’s not the arrow, it’s the indian”.  If Shane McConkey could ski powder on waterskis, you can ski on pretty much anything as long as it’s got some shape and is relatively well tuned.  Stop obsessing about your equipment and look in the mirror grasshopper…

It’s true, he figured it out.  I’ve been guiding/teaching/skiing Pete’s Wagners’ since he launched (>1000 days).  The ability to (for a ski aficionado) use a tool so refined as his makes all the difference, truly!  I’ve skied my Wagners everywhere, Telluride, Jackson, all over the Alps, and in Morocco (Africa).  It is true that ultimately it comes down to the driver.  Most drivers though preffer the shiny red Ferrari to the beat up Tacoma from -90’s when given the choice.  Choose smart, every turn counts. Did I miss the follow-up?

They’ve got some crazy <a href= “https://www.stocktonappliancepros.com/”>appliances</a> in there for making skis. He’s producing a lot though so good for him! Bet business is great!

They’ve got some crazy <a >appliances</a> in there for making skis. He’s producing a lot though so good for him! Bet business is great!

omg, when I was young I really struggling to use ski board and that’s time is a really good memory for me.
Bobob | Tree services Joplin MO

That’s more than the company he works for had designed over the year.
fence care Leander