Tisi is getting back to his park ways as a freshman ripper at the University of Vermont. Jackson Tisi photo.

As you might have heard, Teton Gravity Research's 2018 Grom Contest is in full swing, and we're looking for the next big snow film star. Throughout the history of Grom Contest, the annual video competition has helped establish the careers of countless up-and-coming skiers from Parkin Costain to Daniel Tisi.

Tisi won the contest way back in 2011 when he was just 12 years old, and scored himself a killer segment in our film Way of Life. In the years since then, he's grown up, continued to amass ski sponsors, and is just now finishing his freshman year of college at the University of Vermont.

We decided to hop on the phone with Daniel to talk about what winning Grom Contest contest did for his skiing, how he's juggling skiing with a full collegiate workload, and where he hopes to take his skiing career after graduation.

TGR: So, how's life changed for you since getting to college?

Daniel Tisi: So since last year, I decided to go ski out East here at the University of Vermont because I wanted to really change up my style of skiing. It's a way different type of skiing out here.

Growing up, I skied a lot more park but in the years since, living in Jackson, I've been getting into big-mountain skiing way more. I wanted to get back to pushing myself in the park and get back to that slopestyle kinda skiing, maybe even get used to skiing on icy runs, so I came out here. It's been great.

I still get over a month off for Christmas break which is awesome, because I come home and I'm able to get the best of both worlds. I can honestly say this has probably been the most fun winters I've had to date, splitting time between Vermont and Jackson.

Outside of that, I'm a biology major right now and I'm just working on, you know, ticking away on my school requirements and all that.

Do you think that winning the Grom Contest helped propel your skiing career?

DT: Oh yeah, for sure, without a doubt. It gave me a level of exposure that helped push me beyond the local Jackson skier who just skis a lot. Honestly, if I hadn’t won Grom Contest I think I'd just still be known as the local kid who skis all the time.

It's kinda weird, I even meet people out here at college who know my name and I haven't really ever met them. That's actually really weird–but that all comes from the exposure that winning and filming for Way of Life gave me. It got my name out there, it pushed me to look for my first sponsors, it spurred the rest of my skiing and linked me up with the crew from Ski the East out here. Only good things have come from winning it.

Speaking of, who are your sponsors right now?

How have those sponsors enabled you to further your ski career?

DT: Well, of course they give me gear, which is great–I'm notoriously bad with my gear, I break skis all the time. But the bigger thing it's done is when I release an edit, it's great to have their platforms to work off. 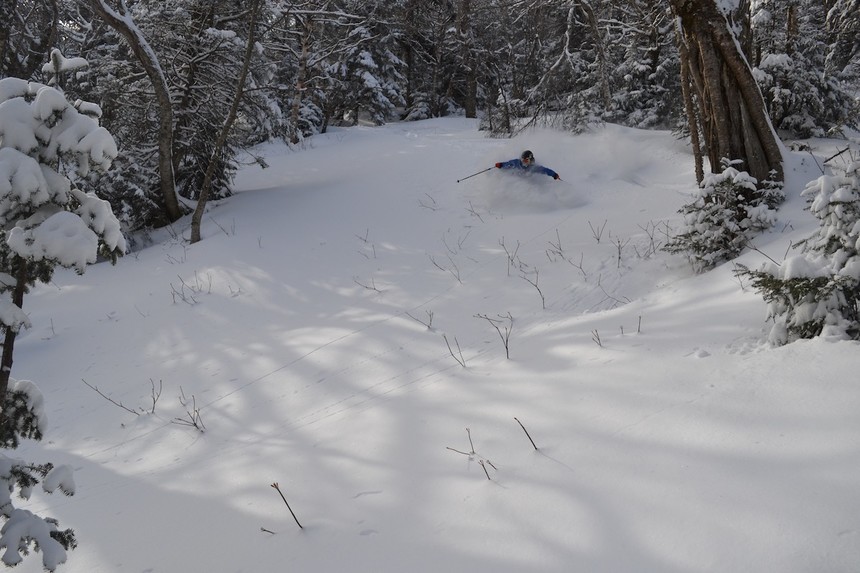 Tisi is getting used to a new style of skiing in the Green Mountain State. Jackson Tisi photo.

It's great when you can constantly share all sorts of media with them, and know they'll amplify it to a larger audience. My brother Jackson has always made my edits since the Grom Contest days, and whenever we come out with something we send them off to sponsors and they post them. And it's great because he's becoming pretty amazing at the whole editing thing and people are starting to take notice.

Have you been able to travel more for your skiing since winning?

DT: Actually, it's funny, I don’t really come from a ski family and we don't travel around to go skiing. So I haven't really gone on any trips, and I spent my whole life in Jackson as a kid, and this past year at college is actually the first time I've spent an extensive amount of skiing in a place other than Jackson.

But, hey if there's one place in the world I'd want to be it would be Jackson–it's an endless playground for the outdoors. It's pretty crazy

So then what was the motivation to get out of town?

DT: I feel like, other than skiing, Jackson is a little bubble. There's not much in Wyoming around Jackson, and it just kinda felt like a bubble. I wanted to humble myself, go somewhere completely different to focus on a new type of skiing.

You mean, skiing on ice and actually having to use your edges?

Like I said I grew up in the park and then competed in IFSA and kinda got away from it. I wanted to get back into park and hone my tricks, and what better place than the East Coast? Sugarbush and Stowe have great parks and there's no shortage of places to push myself out here.That said, big mountain skiing is still my favorite no doubt, and being out here where the mountains are a lot flatter and the trees are a lot thicker does make me miss Jackson from time to time.

But I wanted to try something new and it's just four years of my life.

And what better place to humble yourself than on the Ice Coast?

The ski culture out here is way different, especially on mountains like Mad River Glen–which I love by the way–where it's all locals all the die-hards there riding every single day. It's a much different environment coming from a town that's home to one of the biggest ski resorts in North America.

So what's the next step in your skiing career? Do you hope to make it a full-time profession?

DT: Man, that’s a good question. Skiing is and always will be a part of my life and I will always continue to push myself no matter what I do. But, I always wanted to bridge the gap between being a full-time pro skier and pushing myself academically.

Tisi's only a freshman but has his eyes on his future. Jackson Tisi photo.

Right now, I think want to attend school to be a physician's assistant out of college and hopefully get into that. I want to find a way to be a PA and still pursue my dream of skiing and filming and all that.

But, I'm just a freshman, and it's kinda hard to tell what that will all look like when I graduate–it’s still a long way out.