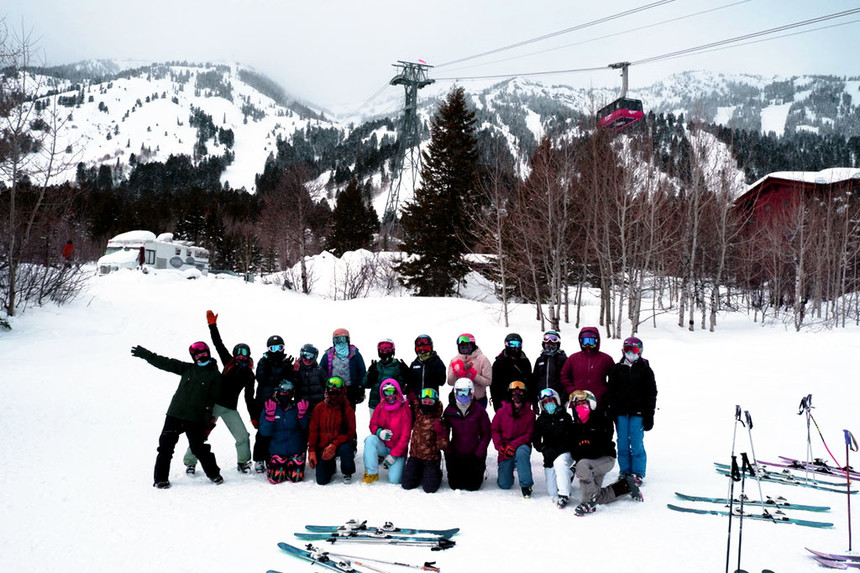 This week on Women in the Mountains we're here to highlight a workshop put on by Coombs Outdoors and Mountain Mind Project as a part of the Women of Winter Series. Izzy Lidsky photo.

After a week of deep powder days and storm skiing at Jackson Hole Mountain Resort, a little bit of sunshine is welcome on a Sunday afternoon, especially for a group of teenage girls on their weekly group ski. This particular weekend, the girls of Coombs Outdoors’ Powder Pals program gathered just up the hill from the tram for the Women of Winter Mindfulness and ski workshop led by Sasha Dingle, founder of the Mountain Mind Project. They arrived slowly, migrating towards their friends, whom they’d gained throughout the winter. Once everyone had arrived, Coombs mentor Laura Gaylord gathered us into a circle to introduce Sasha and let her take the reins for the day. The girls broke up into three groups, each led by a professional skier, with the objective to help Sasha facilitate the mindfulness workshop. A third of the girls were paired with SheJumps founder Lynsey Dyer, a third with Coombs mentor, professional skier, and physical therapy tech Sophia Schwartz, and a third with Sasha herself. Once each group had been assigned, we headed off to Teewinot lift to begin our day of skiing and mindfulness. 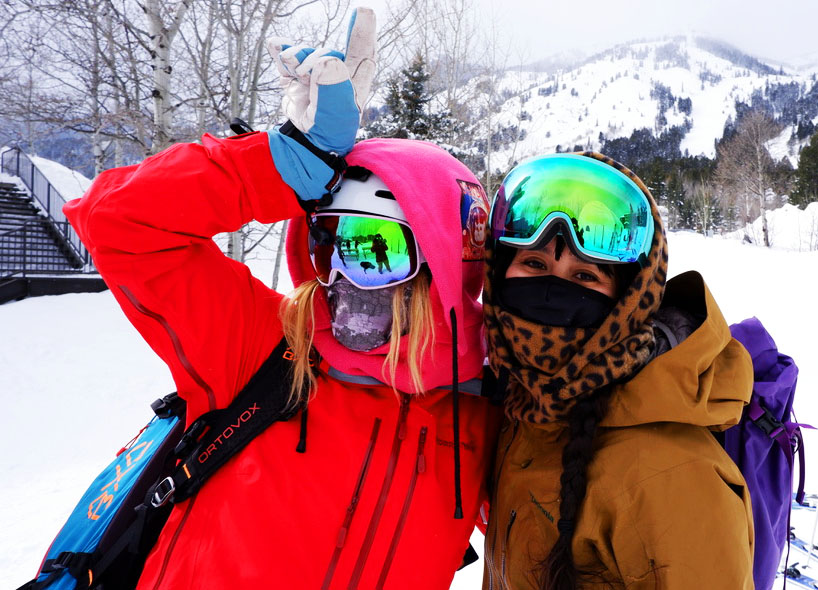 The workshop is a part of a speaker series put on by Women of Winter that Sasha had been a part of earlier in the week. This year’s Women of Winter speaker event highlights the pathways of BIPOC women in the outdoors. The lineup of speakers includes Sasha and Stepanie Lampkin, founder of the software company Blendoor. The event seeks to provide visibility and role models for BIPOC women in the outdoors. During the virtual event, Sasha spoke about her mother’s journey to the United States as a refugee of the Vietnam war, and how her first date with Sasha’s dad took place on the slopes. Although her mother had a rocky start in her ski career (tearing her ACL after being ditched by Sasha’s dad), their family was a ski family through-and-through. Skiing is something that connects Sasha to her family and her roots, but didn’t always make her feel at home. Even while crushing the Freeride World Tour, the lack of other people that looked like her gave her pause. “Even when I was winning, I was hiding,” said Dingle during her talk. “I was building an armor of achievements, but what was I building that in counter to? There’s a piece of feeling like you’re not enough, which is a pretty universal feeling.” For Sasha, mindfulness and the Mountain Mind Project have given her a way to both help others with a similar feeling of not being enough, and work through that feeling herself. With the lack of representation she saw, she found others doubting her abilities to do things she’d already done and sought to become a role model and inspiration for other women and BIPOC people chasing the same dreams she had.

To facilitate the workshop, Sasha gave each of us a little booklet with prompts in it. The prompts were meant to give the girls something to think about while they skied, whether it was just focusing on three deep breaths for each turn or stomping their feet to get in tune with their bodies. 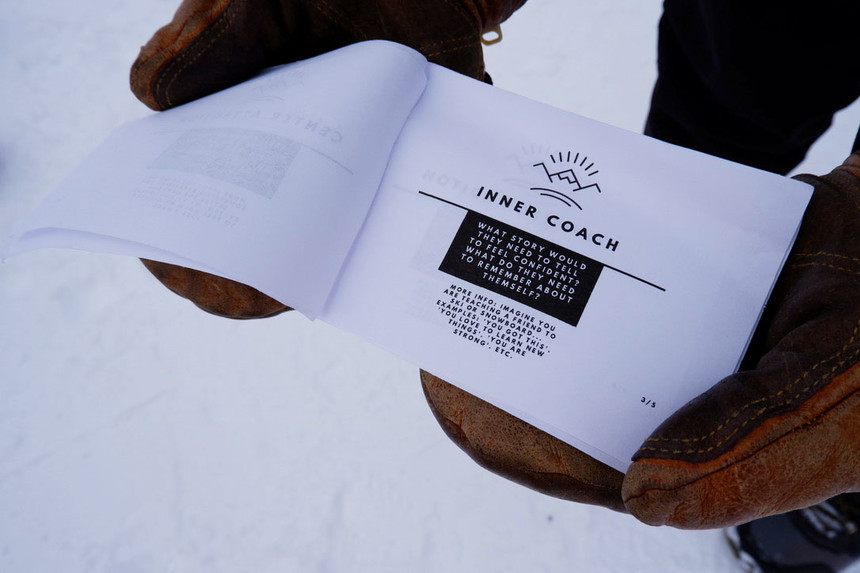 One of the mindfulness exercises we practiced. Izzy Lidsky photo.

As a practitioner of mindfulness, an avid skier, and an expert on what it’s like to be a teenage girl, given that I was one myself, I was intrigued to see how the girls would react to such a day. While I believe that something like skiing can be an incredible vessel to help teenage girls learn so many valuable lessons, I think that bringing something like mindfulness into it can also have great value. While we learn the fundamentals of skiing in ski school, very rarely do we learn how to accompany them with a productive mental space. Someone like Sasha is the perfect person to teach this given both her background as a professional skier and mountain biker as well as someone well trained in mindfulness practices.

I watched the girls gain more confidence in their skiing and in themselves as the day went on, and we went through each exercise. At first, their only task might have just been to wiggle it out at the top of a run. Their movements were still reserved and shy, especially next to the infectious energy of Sasha and the other mentors. Finding practical uses in their exercises, even little ones like stomping their skis on the ground to warm up their toes, but also bring a self-awareness in helping the girls to open up. “If any of those [movements] give you something you can feel as a sensation, use that as your way to tune your body and bring you back into your body before you ski,” Sasha told us all at the top of our first run of the day. 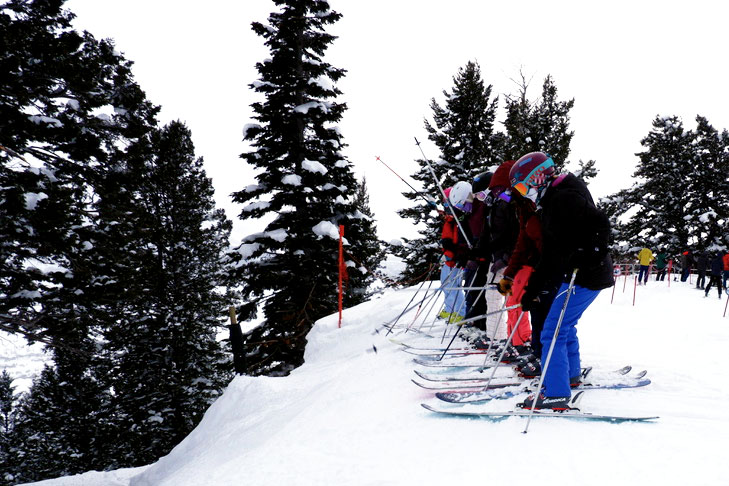 Each mentor was able to bring something different to the table along with Sasha’s curriculum. On our lunch break and over sandwiches and cookies, we discussed the importance of mindfulness in skiing, as well as the positive impact having strong female mentors can make on teenage girls. For Sophia Schwartz, having good mentors growing up was a huge part of her ski career and she wanted to find more meaning in her own coaching. “Coombs is important to me because it helps me re-shift my goals and make skiing fun everyday, which in turn makes skiing fun for me every day. It’s been an important balance for me, in terms of pushing myself as a skier, and then once a week, coming and having these prompts and questions, and figuring out how skiing can be the best and most fun part of my week. For me, Coombs ends up being that,” said Schwartz of her experience as a Coombs mentor. Mentorship played a huge role in Lynsey Dyer’s involvement with Coombs as well. “That’s why I wanted to come today,” she said, “you can see someone you can relate to in a leadership role, and be a badass and know that if she can do it, you can do it.” Dyer told us she’d been hitting every little kicker with the girls following her, just so that they could see her do it and know they could too. It was clear to me that this really made a difference to the girls when I stopped in the Stash park to take their photos and heard one as she passed me after landing a jump say; “Yes! That felt so good!” 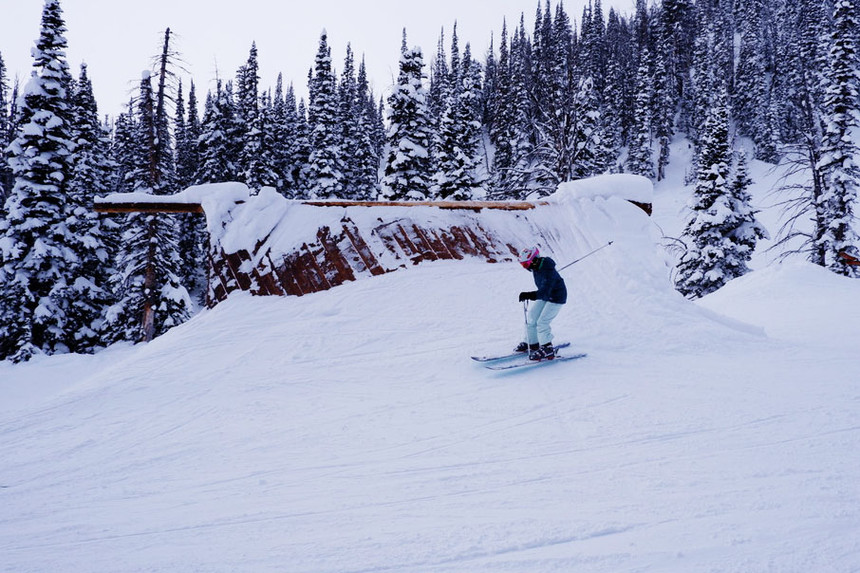 Between the life skills that Coombs helps their kids to facilitate and the tools Sasha provides through her mindfulness practice, it was easy to see the lasting impact that even just a day had on these girls. “Yes, skiing is important, and yes playing outside is important, but unless you’re building a backbone to break down those other barriers, you can just run into a headwall where once that support structure ends, you don’t have a continuation,” said Sophia of how Coombs acted as a well rounded system for its participants. The fact that they were with professional skiers had no impact on the girls’ drive to ski exactly what they wanted to ski, with many of them mapping out their favorite pow stashes through Mr. Toads and off of Thunder. 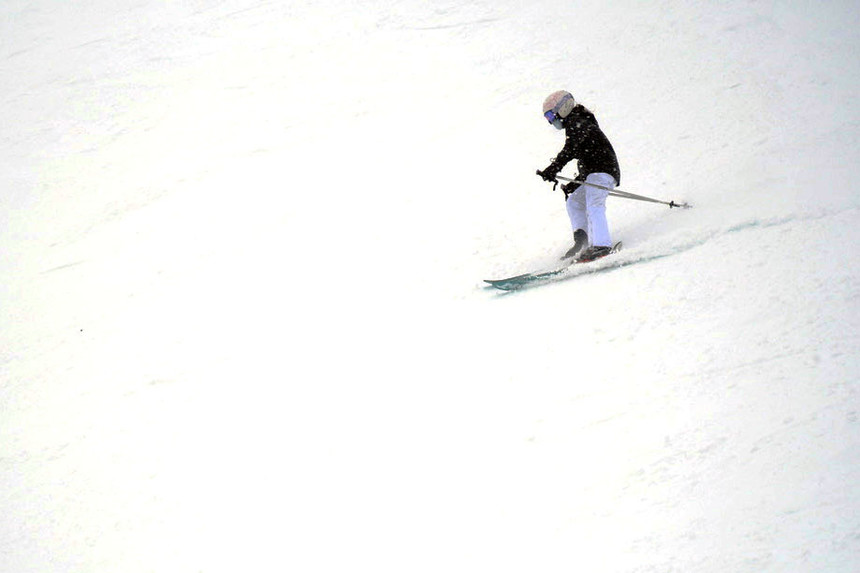 At the end of the day, the group I was with decided it was time for their first-ever Sublette lap. While the sunshine had given way to cloud cover, low visibility, and more snow, the girls dropped into Laramie bowl so fast I barely had time to photograph them. Moments like this made it clear to me that the mentorship given to these girls by women like Sasha, Sophia, and Lynsey, as well as all of their other Coombs mentors was not only making them into life long skiers, but confident young women who had people that looked like them to look up to. Especially for girls, this kind of leadership is crucial to them growing into confident athletes, a path many of them are already on. The guidance from Sasha’s mindfulness workshop just added another tool to the ones they have already started to gain through Coombs. While the outdoor community still has a long way to go in it’s representation of women and BIPOC people, days like this one give me hope for the future of our community. Oh, and I’ll be looking for these girl’s names on the Freeride World Tour roster in about six years.