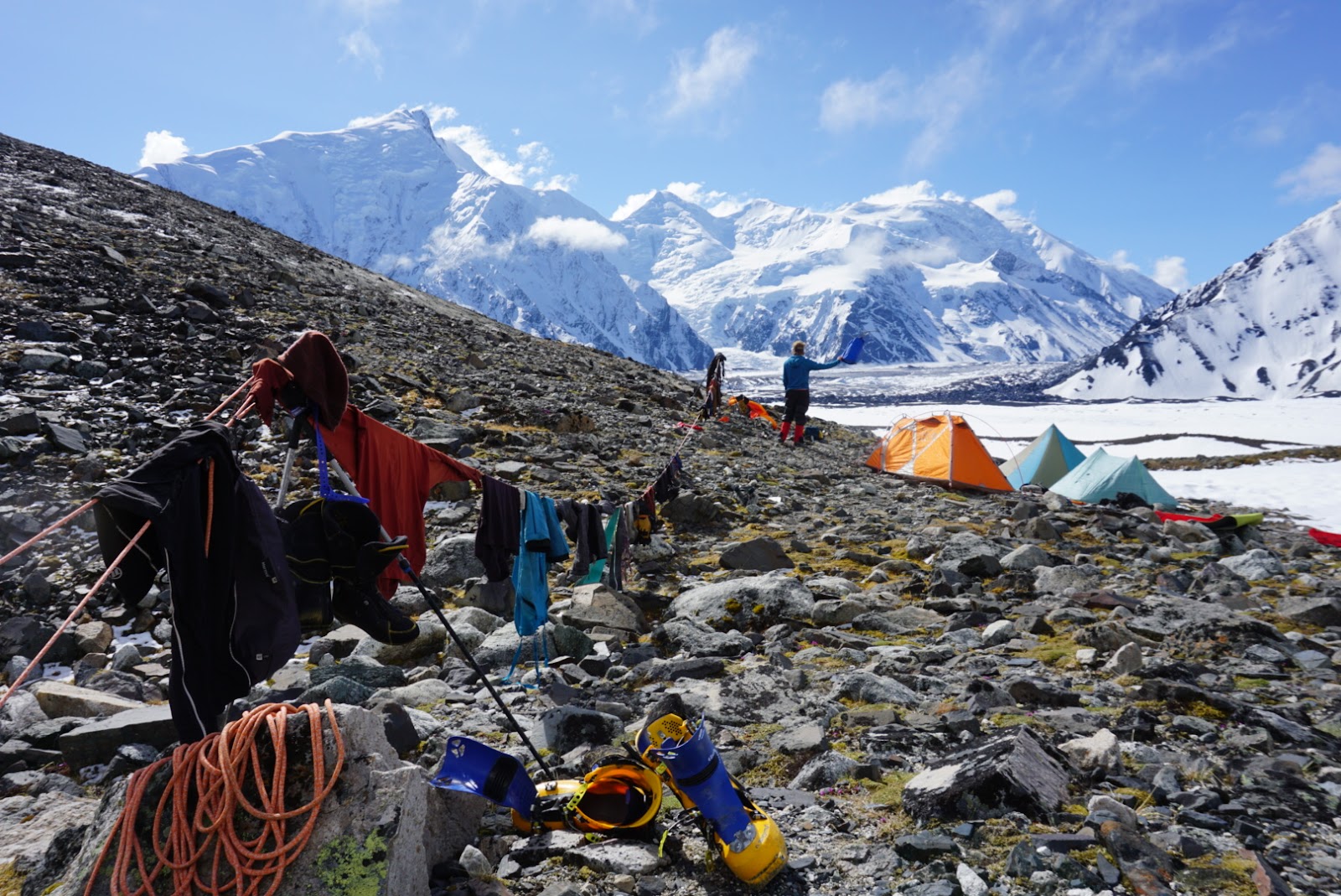 Clay James taking it all in from camp. Cody Hughes photo.

Every spring, about 500 folks attempt to climb 20,320-foot Denali, North America’s highest peak. 90 percent of these climb Denali’s West Buttress because it’s more accessible by air taxi once they get to Alaska. Most fly into Anchorage, drive to Talkeetna, and air taxi to the base of the West Buttress. Naturally, Clay James and Cody Hughes, Salt Lake City-based roommates and active outdoor enthusiasts, wanted to join this elite group. But their plan had a twist.

These guys decided to do this with zero emissions. That meant using no fossil fuels and pedaling bikes with all of their gear, including food, skis and snowboards, the entire way from their doorstep in Utah. Their plan included hiking into the glaciers over jagged tundra to the Muldrow Glacier, a more difficult route, and one far less travelled.

All told, this would add up to 3,560 miles of biking and 63 miles of hiking before climbing the tallest peak in North America.If you flew from Salt Lake to Anchorage, they found out that plane would burn nearly 1,600 gallons of fuel. No one has ever pedaled all their gear and climbed Denali from this distance, although it’s been said that there was a Seattle excursion where gear was shuttled ahead of the ascent.

“I wanted to go to Alaska the hardest way possible - no emissions, no shuttle, carry everything, no guides,” said Hughes.

James, 27, grew up in Arkansas and Hughes, 28, is originally from Tennessee. They are both Utah transplants who love the outdoors. James dabbled in rock climbing in his hometown and while at school at CU Boulder. He is an avid skier, although his biking experience before setting out was minimal. James says, “I was up for the adventure, challenge and just letting things fall into place”. Hughes is a backcountry snowboard/ski guide in the winter. As far as long distance biking, he once rode with his puppy Sierra on a crate attached to the back of his bike from Utah to Florida to raise money for fallen veterans, in honor of his late brother, Sgt. Keith Hughes, who was killed in an accident several years ago.

On March 20 they pedaled away from Salt Lake City, heading northwest through Nevada, Idaho, Oregon, Washington, and Canada, hoping to arrive in Talkeetna, Alaska by May 20th, the date the orientation for climbing Denali started. With all their gear, each bike weighed over 150 pounds. “The bikes were so heavy, they were impossible to push,” says Hughes. March was a record spring for moisture in many areas of the West, which made the trip even more strenuous. They faced rain, snow, and direct headwinds during much of their trip. James says, “We worked backwards counting our miles each day and calculating our next steps to reach our due date in Alaska.” Hughes says, “It was important to focus on the moment” while riding each day.

Instagram stories had started popping up with new followers and in one case a large sign appeared on the road in rural BC saying Cody and Clay turn here. When they made that turn, they met some of the folks that had been following them on social media. Even more meaningful were the connections and new folks they met along the way. “Some of the best experiences on this trip were looking forward to the next town and sharing stories with locals,” says James. These connections continued through the rest of their journey and were key to the success.

The trip took some bad twists near Whitehorse, Canada. Perhaps Hughes’ lowest moment was when he woke up with Giardia - vomiting, shitting, and feeling like all hell had broken loose. This dogged him for most of the remainder of the trip. Then he fell as they left the campground that morning, crashing to the wet pavement. And, to make things even worse, at one point they ran out of food, having not considered that many stores were closed for the off-season or just non-existent. All they had left in their stores was pancake mix which they survived on for several days. 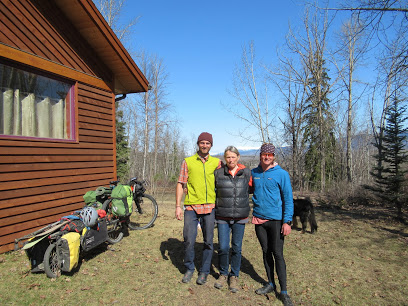 One of the “highlight experiences,” says Hughes, was meeting was Miss Debbie Wellwood, in Smithers, BC. James and Hughes were having dinner when she came in, having spotted their bikes outside. Miss Debbie is 60, and had recently completed a recumbent bike trip with her husband from British Columbia to Florida, continuing on to the southern tip of South America and back. If that is not an inspiration, what is?

On May 20th they reached their last milestone before ascending Denali: the border of Denali National Park in Talkeetna, Alaska. They’d biked 3,250 miles in 60 days. However, they still had another 250 miles of biking on gravel roads to reach the north side of the park, and a 21-mile hike over rugged tundra to reach the Muldrow Glacier. That hike had to be done twice. 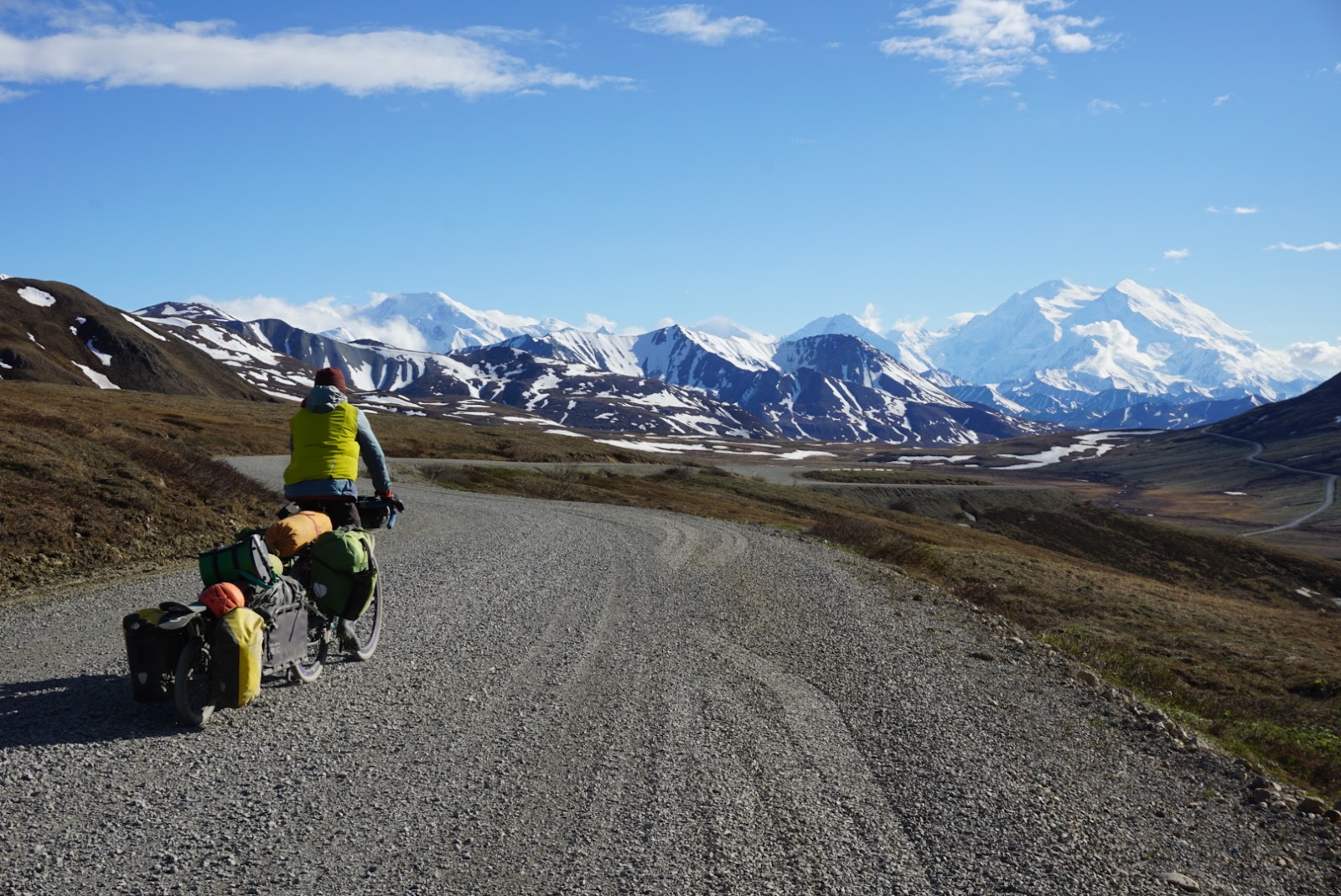 During the ride Hughes blew out his rear rim and had to hitch back to Talkeetna where the owner of The  North Shore Cyclery loaned him a rim. James’s brake pads had worn to shreds and at one point on a downhill gravel section, he was unable to slow down, fishtailing his trailer and crashing badly.

For the tundra hike they connected with an Australian bloke named  Isaac Denny who was riding his bike from the northern tip of Alaska to the southernmost tip of South America. James says, “He was the most psyched individual I’d ever met.” Isaac volunteered to walk the 21-mile double shuttle over the tundra (back and forth in pouring rain) that took five days, hiking from 10 AM to 2 AM. He hiked back to his bike alone. That's a whomping 84 miles of miles extra credit for this dude that was biking to South America.

James and Hughes then began the final expedition to the summit of the Glacier. They double shuttled Karstens Ridge hauling gear from 12,200 to 14,500 feet. Steep terrain faced them including the Lower and Great ice falls. They skied and boarded down from the top of Karstens Ridge.

“The skiing off Karstens was right side up, killer pow. We awoke to sunshine and glittery conditions and were mind-blown when we skied down the ridge with good snow,” said Hughes. 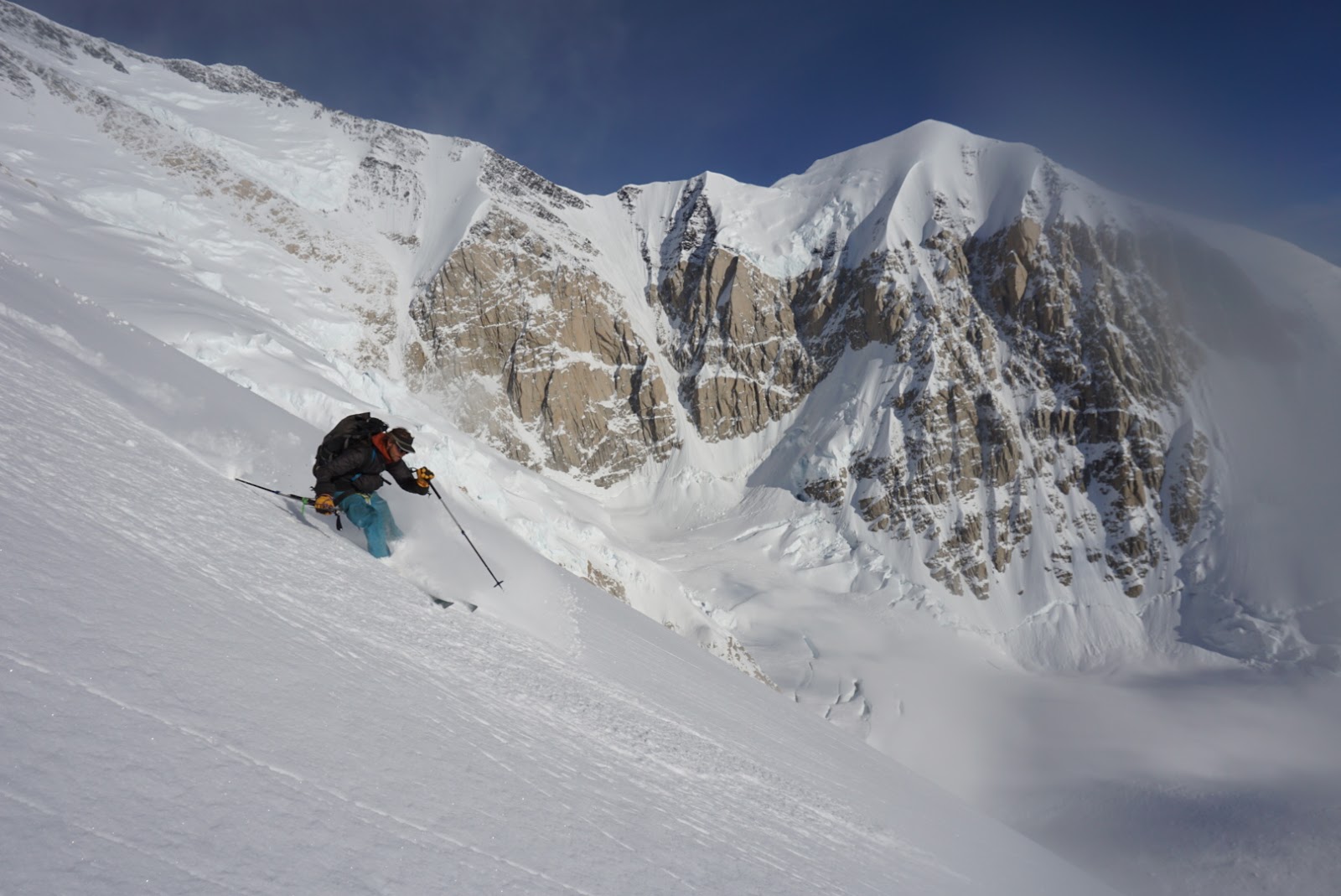 At Denali Camp, Cody was vomiting at 18,000 feet. After hydrating and sleeping, both guys continued their ascent to the 20,132-foot north summit.

James and Hughes reached the summit of Denali on day 84 after leaving Salt Lake City. They spent 30 minutes on the peak before skiing and boarding off the summit. This was the longest human powered approach to Denali ever recorded. 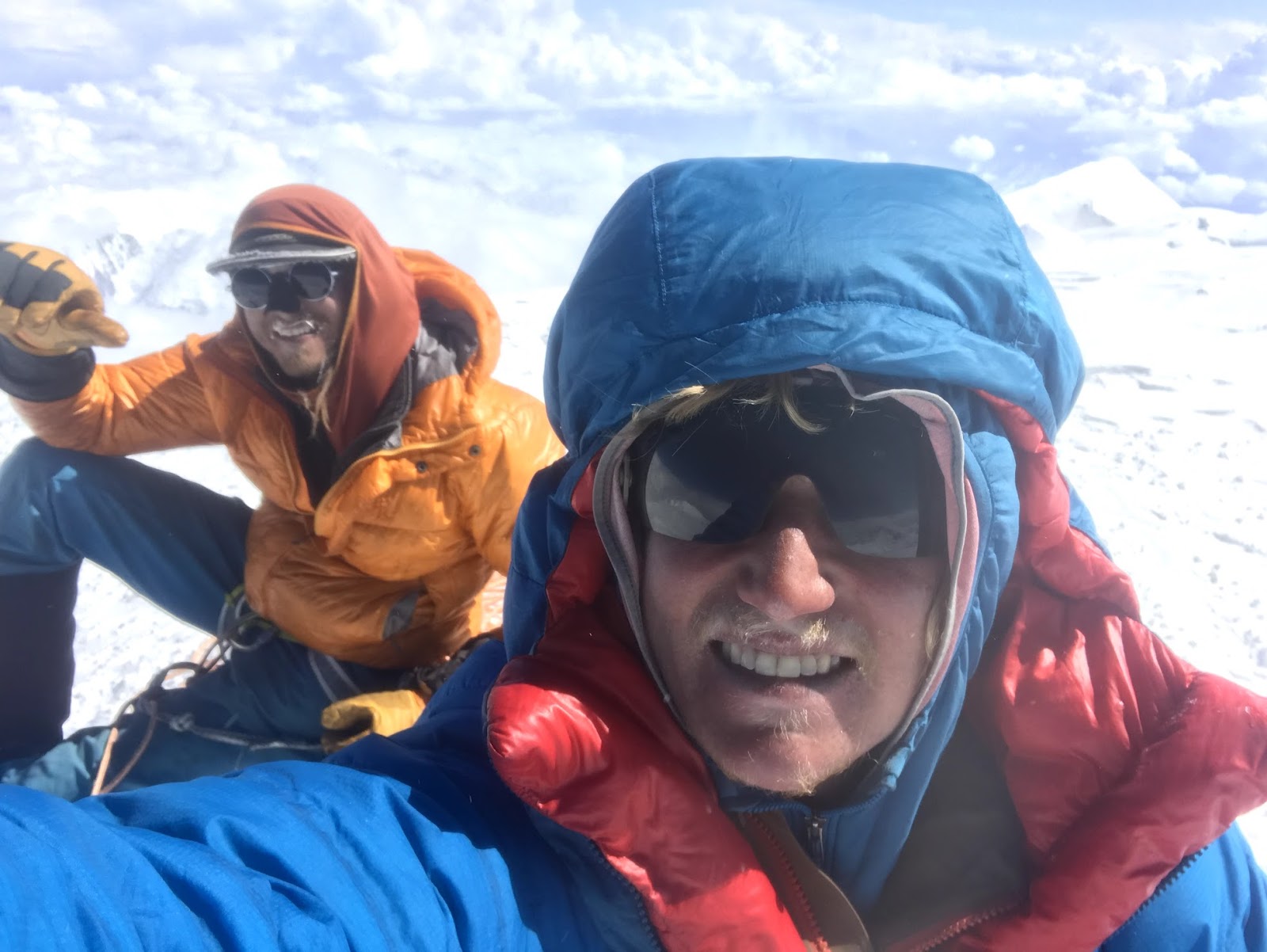 James and Hughes atop Denali after a 3560-mile zero-emission journey. Cody Hughes photo.

“Ski conditions at the summit were variable, wind blow, blue ice, corn, a little bit of everything, not good,” said Hughes.

From the summit, they descended the south side of Denali, staying at 14 camp for several days. Hughes celebrated his 28th Birthday at 14 camp on June 28th. From camp, they continued to ski and board, including a descent of the Orient Express. 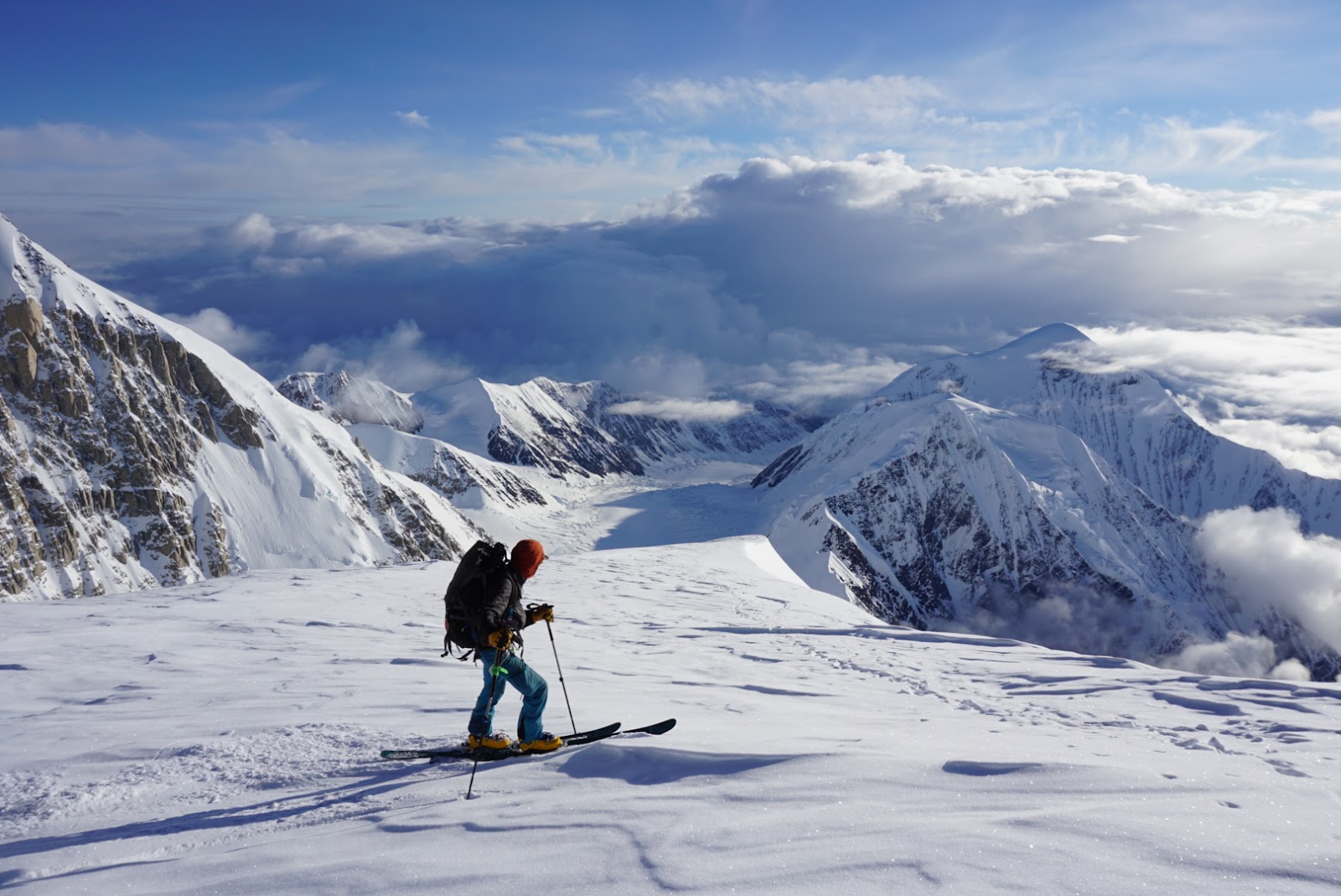 The final plan was to return to Talkeetna with a downhill skin descent to the Pika Glacier and pack rafts to float back to town. But, by this time, having skinned downhill on undulating terrain for 20 miles, Hughes’ boot soles had worn clear through to his socks, prohibiting them from further travel. “My feet were torn apart from blisters,” says Cody. They air shuttled out of the Pika Glacier to Talkeetna, celebrating for five more days listening to live music and just generally hanging out. They were thrilled that they’d accomplished their goals.

When asked, “Did you ever at any point consider quitting?”, they said, “NEVER! Not even in our vocabulary!”

The mountain sports community was shaken to the ground after learning the tragic news that ski mountaineering icon Hilaree Nelson died earlier this week in a ski accident on Manaslu. The Telluride, Colorado local was more than just a skier – as a mother of two, she brought her leadership and compassionate energy everywhere she went…and that was a lot of places. She was the real-life superhero we needed who truly was a pioneer and leader in the outdoor space, with incredible achievements in