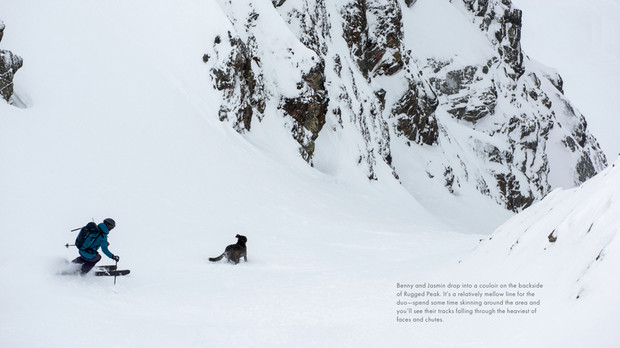 Guide Jasmin Caton and Valhalla's Touring Mascot, Benny, drop into a couloir on the backside of Rugged Peak. Photo by Garrett Grove.

Evan Stevens and Jasmin Caton found the elk the next morning on the snow cat access road. Or at least what was left of it. The wolves had done a thorough job. But you have to expect that this far into the wilds of interior British Columbia.


The wolves were part of a growing local pack in the area, and the lonely road is the only access into Valhalla Mountain Touring, a backcountry lodge outside the tiny village of Hills, BC.

“Last year I saw wolf tracks near the lodge for the first time,” Jasmin says. “Then this year, in December, Evan was driving a snowmobile up late one night and came across an elk running on the road. It seemed freaked out, and the next morning when he came back down he saw the elk, slaughtered and surrounded by wolf tracks. It was brutal, but it’s their turf too.”...