“The first run we cut had some real epic flow,” said Zac Freeman, pioneer of sustainable backcountry ski development in Vermont and hopefully, the rest of the ski community. “It goes down, then it slices over a little bit, and then shoots around these trees. It has great pitch, good character and an all around a fantastic feel to it. It was effortless. It was far beyond what I expected.”

Zac’s talking about the first run he and other members of the Rochester Area Sports Trail Alliance  (RASTA), cut in the backcountry area of the Braintree Mountain Forest in central Vermont. It's the first of it’s kind, as Zac and RASTA are pioneering backcountry trail development on private land.

The sun rising on a beautiful day for BC skiing in Vermont. Zac Freeman photo.

“It’s unheard of!” Zac tells TGR. “Everyone wants to sell their land and make a buck. This land is fantastic: it goes right from the valley floor with the headwaters of a major stream to about one and a half miles of ridge line. It encompasses 4 mountain tops, and Skidoo, the mountain we’ve developed, is right in the center.” 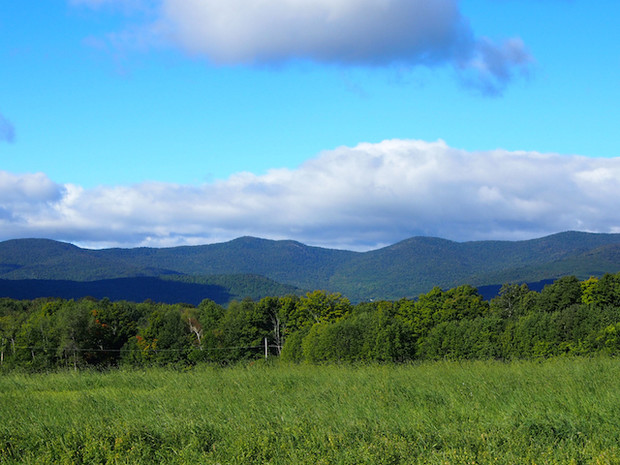 Looking west to the Braintree Mountain Forest and ridgeline (starting with Roundtop Mountain on the left and going to Twin Peaks, Skidoo, and 3030 on the right). Paul Kendall photo.

Why would Paul and Sharon give up their valuable land?

“My wife and I have always felt that we’ve been enormously blessed in life and don’t deserve anything close to what we have,” Paul explains. “We’re basically stewards of what we have, and when we acquired these properties, we didn’t keep them in our own name. We immediately transferred them to a not-for-profit operation that we’ve created called the Todhah Hill Foundation.”

They began to wonder what would happen this land after their tenure of it. NEFF shared the couple's vision of land as an economic, recreational and environmental resource in Vermont. Both parties maintain that the long-term economic use is producing forest products, but that in the interim between harvests–about 30 to 50 years depending on growth–that it should be open to the public for respectful pedestrian use. 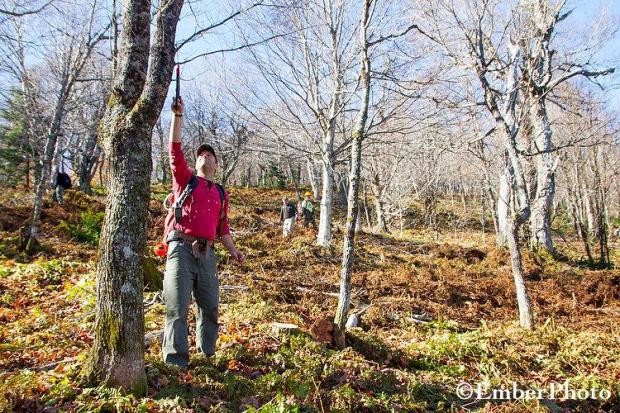 Thinning on branches for the upcoming season. ©Brian Mohr/Ember Photo.

A partnership between NEFF and RASTA made perfect sense. RASTA was founded in 2013 with a mission to provide safe and sustainable trails and backcountry ski glades for visitors and locals alike. Now in their second year, RASTA is making huge strides within the Vermont ski and forestry communities. Zac hopes the project on Skidoo Mountain will act as a model for skiers and landowners moving forward.

A year after approaching NEFF, RASTA began breaking ground. In 2014, over 35 volunteers came out to help on a crisp fall weekend and this spring, more glade cutting ensued.

The Vermont culture, traditionally, has been one of open land, with strong landowner liability laws that help property owners feel comfortable with open use. “It basically sees that landowners don’t have any liability if some fool comes up on their land and trips over something and breaks their leg," Paul said. "Anybody can go hunting, fishing, skiing, snowshoeing, whatever, on anybody’s land.” It's too complicated to get into more detail here, but there are also economic incentives to enroll land on a "current use" basis to cut tax liability. 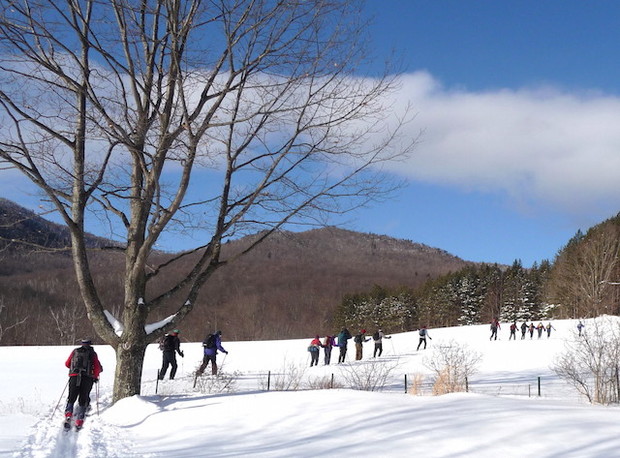 Heading out for a day in the glades from Paul's backyard. Sharon, his wife, leading the way with Paul bringing up the rear. RASTA photo.

“What makes this work is a combination of Vermont land use culture and the sense of community here of people who want to take action,” said Paul. “You know they’ll be respectful and you know that if you have a problem, you don’t have to deal with layers of bureaucracy. In some sense, it’s very libertarian. We control the land, this is what we want to do in a respectful way, and you get it done!” 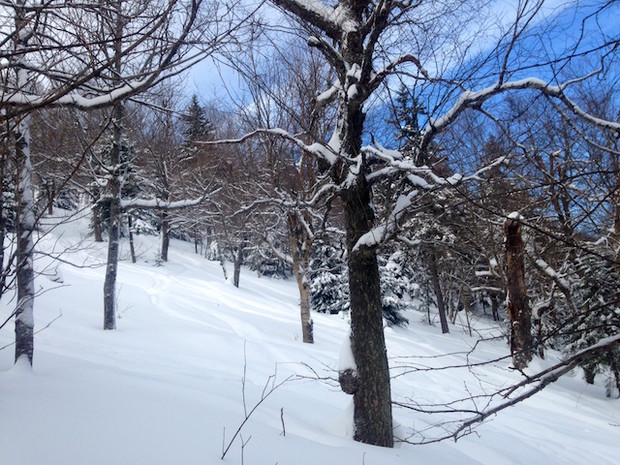 Backcountry skiing in Vermont has a history of shady business, as a lot of territory is cut illegally. Back in 2007, the quiet glade-cutting community was broken wide open when two men were arrested for clear cutting 873 trees to make a 60 foot-wide, 3/4 mile-long run down the face of Big Jay in Northern Vermont. The news not only shut down access to a large swath of Big Jay, but created tons of animosity towards those who thin out tree stands for better turns in the winter. RASTA hopes this project will show that BC development can be done in a legal, legitimate, sustainable way.

“There are always going to be secret lines and secret runs, you’re not going to stop folks from cutting under the radar," Zac said. "But we’re just trying to get it out in the open a little bit more, so that other landowners can see, 'Oh wow, that did work, and that was successful, and it’s not a bad thing.'”

From a forestry perspective 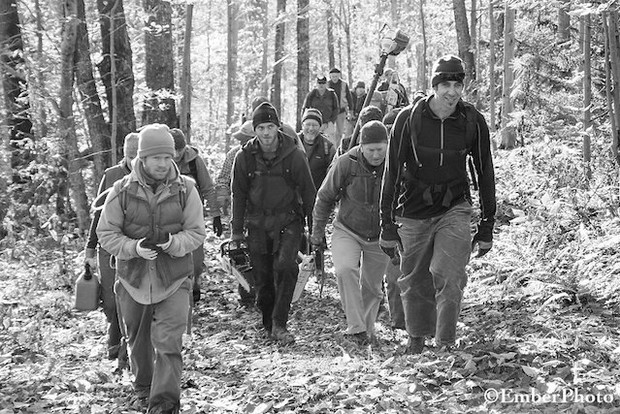 But wait, what about the trees? What does Zac mean by “sustainable development? Rest assured, RASTA isn’t just going into the Braintree Mountain Forest and blindly cutting down trees. When done correctly, backcountry development is actually good for the surrounding forest.

In forestry, there’s a term called "timber stand improvement," or TSI. RASTA actually helps strengthen TSI, as most landowners will clear out dead trees in congested areas to give younger trees the chance to mature into older growth trees. Careful development and maintenance improves the value of standing timber.

RELATED: This Video Will Make You Want To Move To Vermont

Zac is in the front, flagging the lines when they cut runs. “I’m looking for mature trees to follow. We strike a balance between what’s good for the forest–from an investment standpoint and a wildlife ecology standpoint–and what’s good to ski. We’re not just crushing the fall line.”

RASTA worked with a team of NEFF foresters during the first run cutting, making sure to avoid maples, yellow birch trees, spruce trees and other higher value trees. Pulpwood and diseased trees were fair game.

After the kinks were ironed out and the guidelines set, the group worked efficiently and will continue to do so. Zac says, “A group of 10, with a couple of chainsaws, can cut a 1,000 foot run in one day.”

Vermont ski culture: conducive or not? 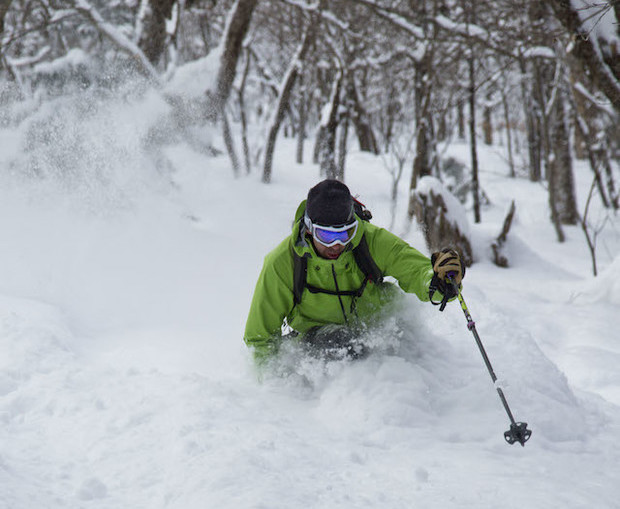 Vermont born and bred, Zac’s been skiing in the area since he was two years old–a position that he thinks allows him to open up access without disturbing others’ personal stashes.

“The cool thing about this is that it used to be 'my stash,'" he told TGR. “This is an area I’ve skied since I was a little kid. It’s not like we’re trying to go in and map and blow up everyone’s stash. That’s not the goal. We’re trying to show people that there’s enough to go around. There’s so much of Vermont that can be skied.”

But for every jealous stash-guarding skier, there are people like Paul and Sharon who are genuinely stoked to see people having fun in their backyard.

“It’s wonderful!” Paul said. “Last winter, we had a phenomenal snow year here, we had an average of three people every day during the week going up to ski the glades and on weekends, about six. It was wonderful to chat with them as they started out in the morning, and see them skiing across my field in the back–all pumped and excited to be here.”

“We’re just delighted to see this level of excitement, energy and enthusiasm,” he added.

Looking to the future

What’s next? Increased glade development, parking lot improvement and cabin renovation. RASTA is fundraising to add an additional glade or two off the adjacent summit of Twin Peaks, resolve parking issues from last winter by building a 16-car lot, and fix up a cozy après-ski cabin for day use and overnight BC skiers. RASTA, working with The Catamount Trail Association (CTA) and Vermont Backcountry Alliance (VTBC), is also creating a grand plan for the Chittenden-Brooks Zone located in Central Vermont.

“It will be the first time ever that a backcountry ski club will get the green light to cut and maintain backcountry glades on National Forest land, and that’s a pretty big deal,” Zac said. “That will push into further projects. We’re setting the precedent.”

Let us know in the comments–are you familiar with any other organizations, in the Northeast or anywhere else, who are attempting similar feats? What are your thoughts on recreational land use in your neck of the woods?