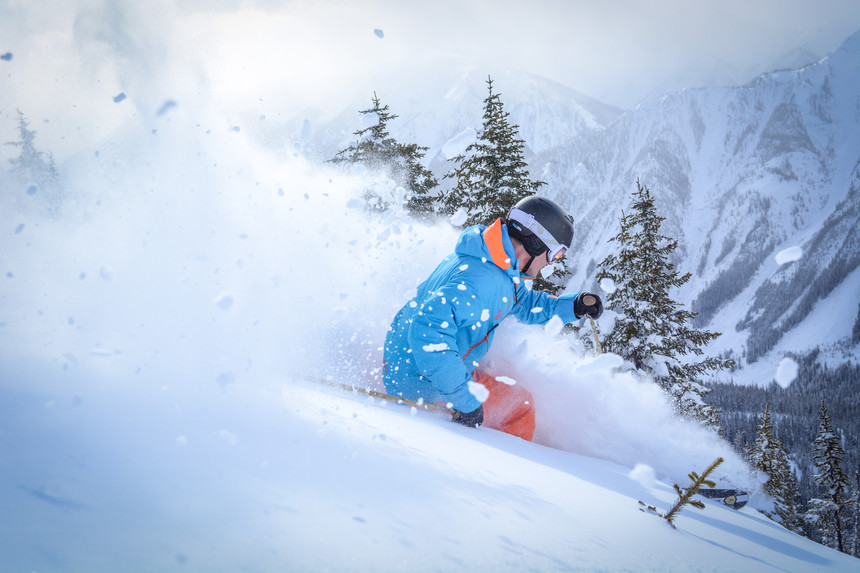 High above the Kicking Horse River, on the outskirts of Golden, B.C., there is a series of corners on the Trans-Canada Highway that are perpetually under repair. Every winter, parts of the steep mountainside collapse and damage the road. Every summer, the highway department mends the road. It is fate.

To Canadians, it’s reminiscent of “The Simpsons” ever-burning tire fire. We sit in lineups of hot cars in July, waiting for the single lane of construction traffic to be let through. To visiting Americans, our bizarrely primitive two-lane “national” highway seems laughable. But we have an explanation. The dense mountain ranges—Rockies, Purcells, Coast—between Canada’s prairies and the Pacific Ocean are gnarlier than most, and we have only a few pathways that bypass these sentinels of the West. Near Golden, B.C., at the edge of the Rocky Mountains, these roads tend to fall apart more often than others. 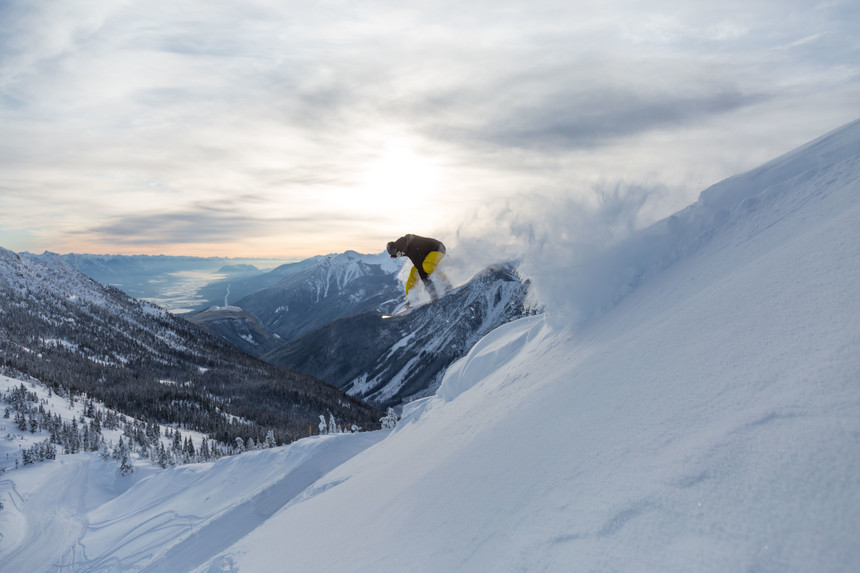 Bowl Over is a favorite spot to hit after a good snowstorm. Nick Nault Photo.

There are exactly four “highways” that cross the entire stretch of the Canadian Rockies. Four. And Golden—home to the worst corner on the entire Trans-Canada Highway—is also where Kicking Horse Mountain Resort (KHMR) is located.

KHMR is an anomaly in North American skiing. First off, it’s sharp; every edge pokes and prods like a dagger into the sky above the Rocky Mountain Trench. (Curiously enough, KHMR doesn’t sit exactly within the Rocky Mountains; it’s across the river in the Purcell Mountains.) Chutes descend into the valley from every jagged, intimidating ridge off the summit. Look at the map…it bristles with double black–diamonds. There’s but one lift that goes from the base area to the summit, with a vertical relief only 6 feet shy of Jackson Hole’s, and it features similarly gnarly skiing: pillows, cliffs, ridges, and straight-up genital-tingling steepness. Kicking Horse is the real deal. 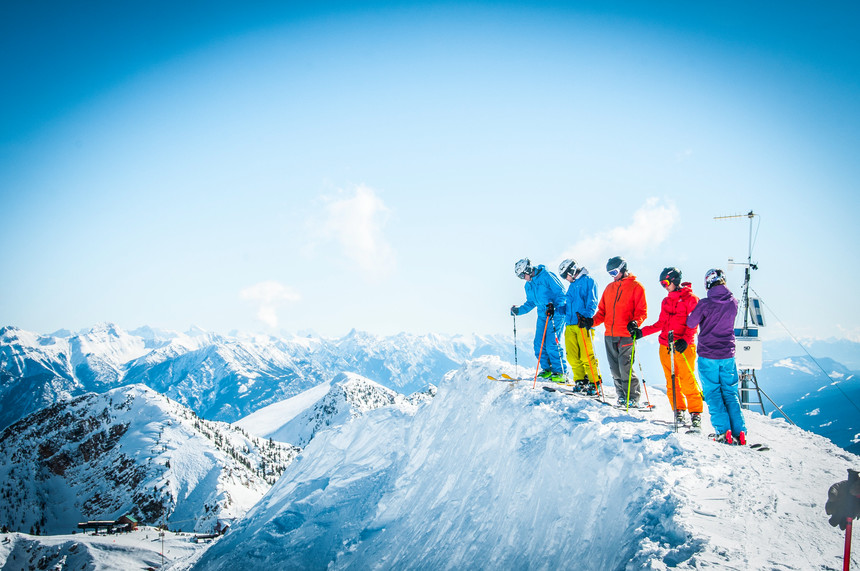 Golden is a place of confluence. It’s where mountains, rivers, railways, roads, and cultures come together in turbulent fashion. Explorer David Thompson arrived here in 1807 in search of the Columbia River Valley, a valuable path to the Pacific that travels 1,243 miles from south of nearby Invermere to the Oregon coast. In Golden, the Columbia intersects the always raging Kicking Horse River, a waterway named after a dude who got his chest booted by a horse and was left for dead, only to wake later being carried to the graveyard. Like I said, gnarly.

This is also a town bisected by Canadian Pacific Railway’s (CPR) robust rail network, the same steel-and-timber iron-horse highway that fueled the country’s rapid growth in the 1800s. In the middle of town, snowmobiles rattle in the backs of pickups as they cross multiple railway crossings on their way to secret big-mountain staging areas. The town itself was seeded by Swiss mountain guides whom the CPR hired to help build railroad lines through vicious mountain terrain and create the crossroads it remains today. 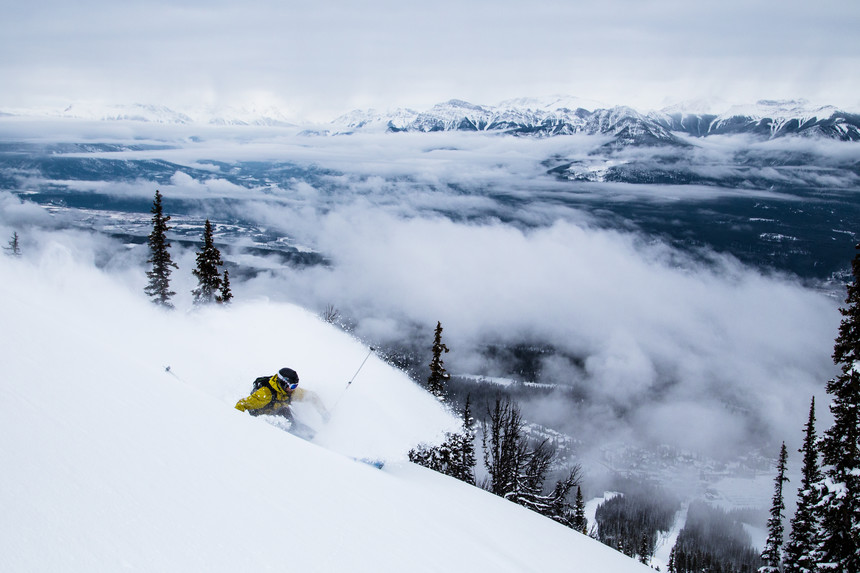 The way out of Super Bowl and Bowl Over has no shortage of powder. Dave Best Photo.

It’s also a crossroads of Canada’s best skiing. In Sherpas Cinema’s new film Children of the Columbia, skiers Dane Tudor and Christina Lustenberger track the river from the Canadian border north to just the other side of this range, skiing some of the best powder seen on the screen in years. Rogers Pass lies a short drive away. Dozens of cat-skiing, ski-touring and heli-skiing operations work the area. Hell, down the road on the other side of the range, Hans Gmoser invented heli skiing. Golden may be on the far side of the Rockies, but it sits in the center of Canada’s hardcore ski scene.

Which brings us back to the road. Before skiers from Calgary, Alberta—the closest major city and probably Canada’s most substantial source of serious skiers—can get to Golden, they need to drive three hours in terrible conditions, past seven other ski resorts, two of which aren’t half bad. What that means for Kicking Horse’s skiers is that the masses remain deterred by the TransCanada highway and all the riches of the Rocky Mountains. Kicking Horse and its perfect Purcell powder remain relatively unspoiled.

In other words, bad roads make for good skiing.

A day at KMHR challenges the strongest skiers. This is a mountain of iron thighs and legendary lungs. There’s one gondola to the top, and there’s no mid-station. From the Eagle’s Eye Gondola, skiers follow the ridges to either side. To the south, the two Terminators (T1 and T2) offer some of the best lift-accessed, hiking-required steep and deep on the continent, skirting permanent closures and cliffed-out sections along the way. Towards the valley falls CPR Ridge, a wild and rowdy collection of chutes, pillows, and mini couloirs. To the north, a fixed grip quad takes you to Blue Heaven, where the steepness of Whitewall awaits. Ozone—a venue for the Freeride World Tour—is slated to open to the public for 2019, accessed by a 20-minute hike—easy by Golden local standards. 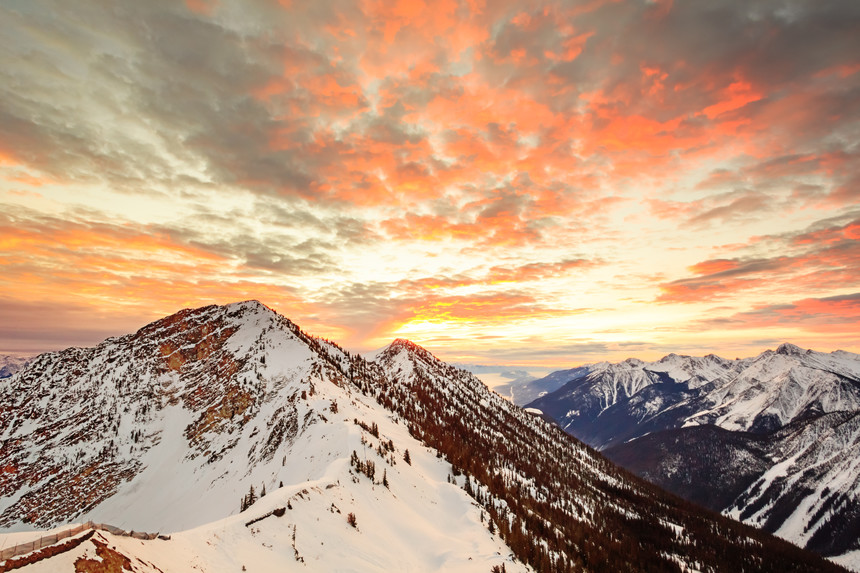 What better way to end the day than with a sunset like this? Dave Best Photo.

Because Kicking Horse locals are hard. They ski fast and loose. They climb like goats on speed. They have stamina. Carved from years of mogul-smashing and cliff-stomping, Golden’s hardest can withstand Chamonix, Jackson, and La Grave. But they rarely leave. It’s hard to. And that’s the just the way they want it.