Skiing or riding the Interconnect – linking together the resorts of Park City with those of Big and Little Cottonwood Canyon in one day – should absolutely be on your bucket list. Photo courtesy of Visit Utah.

As Brigham Young crested the Wasatch with his band of Mormon pioneers, he declared, “This is the place.” More than 160 years later, millions of skiers and snowboarders say essentially the same thing each winter.

Utah is unique in the global ski landscape. Six world-class resorts are clustered in short proximity to a city of 1 million, with a handful more spread out to the North and South. Thanks to the lake and orographic lift, the mountains here get outlandish amounts of snow that tends to fall at the perfect density for riding. With an international airport within 45 minutes from the slopes, access is unparalleled. In short, if you are into winter sports, a trip to Utah should be in the cards at some point.

For a one-off trip, a stay at any of the resorts will be enough to keep you entertained, but there is so much more to the Utah winter scene than hill banging from a comfortable hotel room. Here are just a few things that should be on your Utah winter life bucket list. 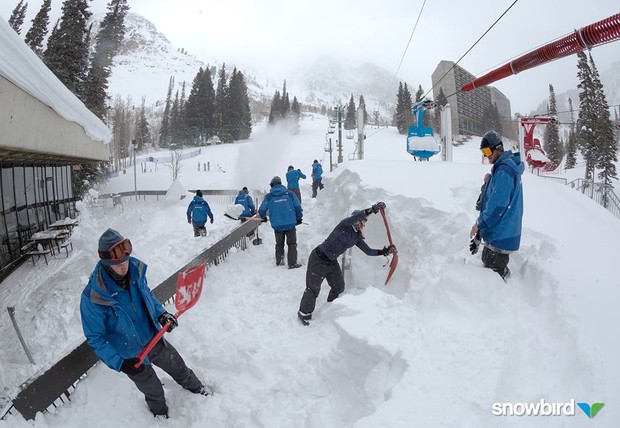 You might not be able to leave the hotel for a spell, but that means there's this much fresh snow on the ground. Matt Crawley/Snowbird photo.

On paper, getting Interlodged doesn’t seem like such a great thing. “Interlodge” is short for “inter-lodge travel is prohibited,” or in layman’s terms: stay inside, right where you are. Merely walking from one lodge to another is punishable with a fine.

RELATED: 2-3 Feet of Blower Pow is Headed For the Sierra This Weekend

When the town of Alta institutes Interlodge restrictions, it means there is so much snow on the steep walls of Little Cottonwood Canyon that it’s not safe to be outside until the avalanche danger has been mitigated. It also means the road is closed.

When the restrictions are lifted, you and a few hundred of your friends will have Alta and Snowbird to yourselves for at least a couple of runs before the masses from Salt Lake City can get to you.

It’s not uncommon for the ski areas to open, but for the road to remain closed for several more hours, a phenomenon locals call “country club skiing,” because it’s like having a private resort.

#2: See Bryce Canyon after a snowfall 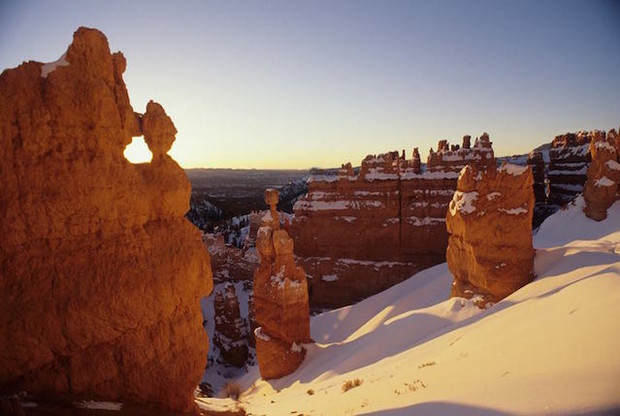 Bryce Canyon after a snowfall. Photo courtesy of Visit Utah.

A fresh blanket of snow on the orange hoodoo formations of Bryce Canyon is otherworldly beautiful. While the canyon has been skied during the rare winter when it holds enough snow, downhill skiing in the park is illegal. So bring your Nordic gear, rent some snowshoes, or just enjoy the view.

#3: Have a Beer with Buck at the Shooting Star 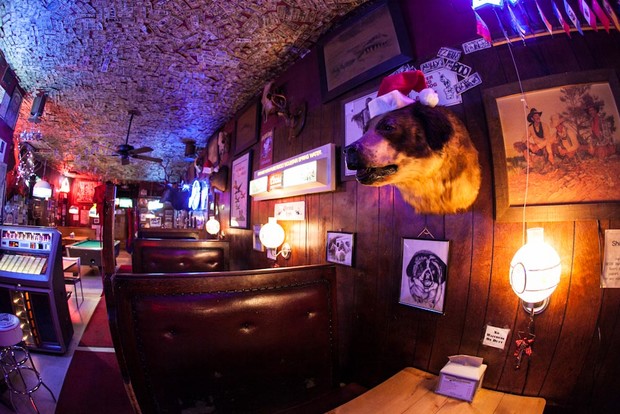 Stay in business for more than 130 years, and you’ll pick up some interesting décor. Established in 1879, the Shooting Star Saloon in Huntsville is Utah’s oldest pub and it has more than it’s share of eclectic furnishings, including thousands of dollar bills stapled to the ceiling, an 18th century French military rifle, and a National cash register from 1900.

RELATED: Built in the Mountains: Eco-Friendly Tiny Homes That Got Their Start in Jackson Hole

The pub's most famous fixture is Buck, the mounted head of a St. Bernard. In his day, Buck was the largest St. Bernard in the world, weighing in at nearly 300 pounds. When he died in 1957, his heartbroken owner decided to have him stuffed, and eventually bequeathed him to the bar. A beer with Buck is best enjoyed after a day at Snowbasin or Powder Mountain. 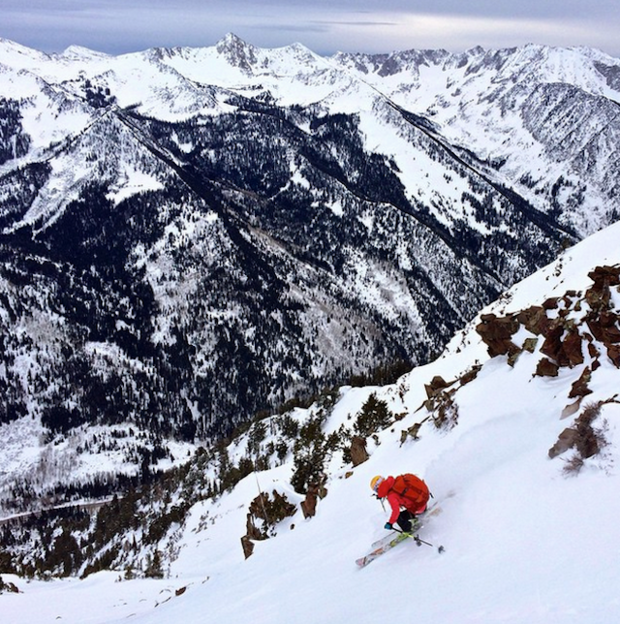 The Wasatch has no shortage of iconic backcountry runs. Many a new resident has bought Andrew McLean’s guide book,The Chuting Gallery: A Guide to Steep Skiing in the Wasatch Mountains, for the sole purpose of ticking off descents listed therein. When snow conditions cooperate, the Y is as good a place to start as any, if for no other reason than you get to look at it every time you drive up Little Cottonwood Canyon.

RELATED: What Was Going Through Sammy Carlson's Head Falling Off Massive Cliff

A 3,400-foot north-facing swath near the mouth of LCC, the Y is close to the road, steep, and reasonably straightforward. It’s a fairly common ski, so there is often a boot pack already in, but because it is north facing and somewhat sheltered, the snow stays good.

#5: Get Faceshots Under the Lights at Brighton 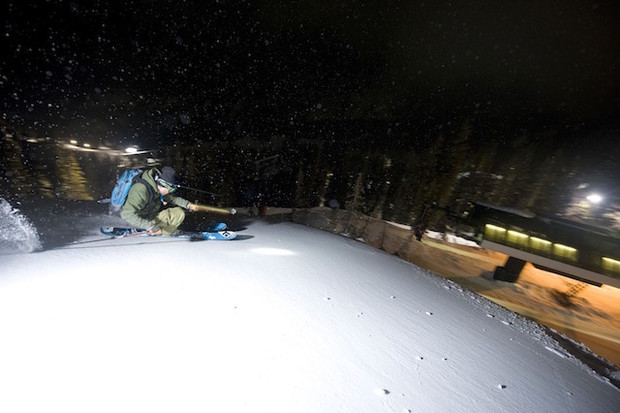 We all have our perceptions of night skiing, and most of them include freezing, a flask, some groomers and more freezing. Then there’s night skiing at Brighton: 22 runs, 200 acres, three lifts, a terrain park, and with 500 inches of snowfall a year, the slopes are due for at least a few powder nights a year.

The windows at Molly Greens overlook the lift line, so you can watch your friends or your kids cycle through laps from the comfort of a warm bar with a big fireplace. 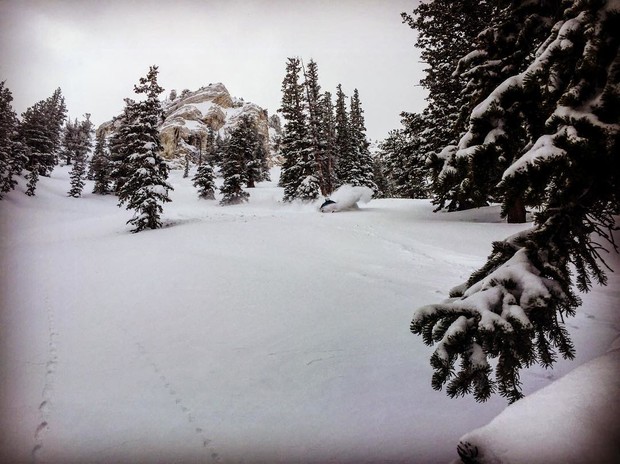 The unique proximity of many of Utah's ski areas lets you tour between nearly all of them in one day – if you've got the energy! Photo courtesy of Ski Utah.

With just a small amount of backcountry touring, you can connect six different resorts (it was seven before Canyons and Park City combined into one super resort). If you start at Deer Valley, and end at Snowbird you can complete the circuit with very little climbing. Ski Utah offers a guided Interconnect tour with lunch and transportation included starting at $325 and starting at either Deer Valley or Alta/Snowbird.

Salt Lake City is a hub of urban snowboarding, and home to luminaries such as J.P. Walker and Jeremy Jones. If a feature is rideable, it’s most likely been hit, and probably appeared in a movie or a magazine. So you’re not going to find much in the way of undiscovered territory.

For a fun afternoon of jibbing, however, find the Rail Gardens. A hilly park speckled with shreddable features just off 215 in the Millcreek area, the Rail Gardens is where local pros will go to warm up for bigger, more film worthy features, or to work on new tricks.

How To Ride Vancouver’s North Shore & Why It’s…

The Bucket List: How to Ski Or Ride Tuckerman…

The Comprehensive Guide To The Whistler Bike Park

TGR’s Guide to Skiing With Greek Gods - The Bucket…

The 7 Things That Should Be On Your Utah Winter…