Nestled in the far northern region of British Columbia, the small town of Terrace is a hidden gem. Incorporated in 1911, the town was settled along both banks of the mighty Skeena River and was primarily developed around the railroad that chugged through the valley. Surrounded by towering coastal mountains and deep within the Great Bear Rainforest, it embodies the quintessential scene that has so many people falling in love with the Pacific Northwest of North America. Yet even with its stunning scenery and a semi-industrial economy of sawmills and logging, the town remains more or less untouched by the loads of tourists who frequent southern British Columbia and resorts like Revelstoke or Whistler.


In Terrace, it absolutely dumps snow: there are mountains as far as the eye can see, and there is more backcountry than one could possibly access in just one visit. And the best part? Most people don’t even know it’s there.

RELATED: Read 21 stories of TGR's athletes pushing the limits in Far Out, Presented by REI.

Terrace’s Shames ski area is a mountain cooperative owned by the town, a small and tight-knit ski community that resides at the base of mountain. From its locals who have been there for years to the athletes who have moved up from Squamish and Whistler, Shames is a mountain for everyone. 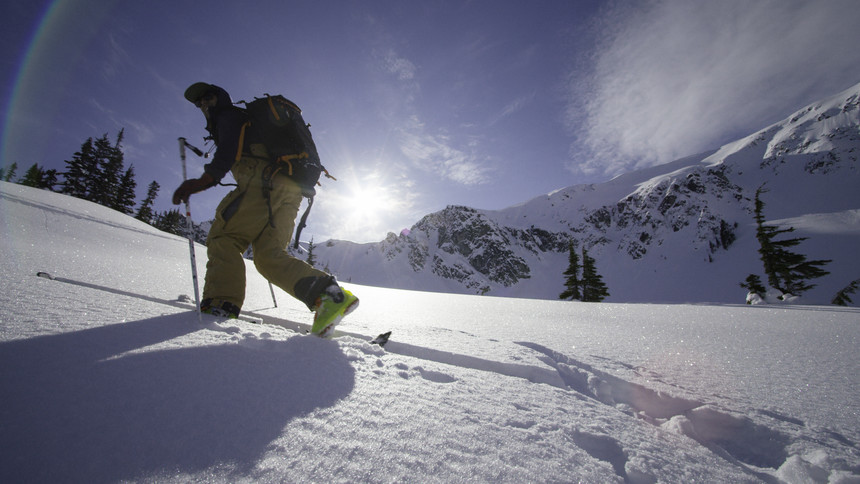 While the inbounds terrain may be nothing extreme, these kinds of goods lie just beyond the gate. TGR photo.

With the greater skiing community rapidly putting more value into backcountry exploration, Shames’ access to unridden territory is perhaps one of its biggest draws with backcountry zones comparable to those of Jackson Hole. While the inbounds terrain is nothing extreme, the access gates off the top of Shames will lead to a lifetime of skiing opportunities.

When the crew - Tim Durtschi, Colter Hinchliffe, and Parkin Costain, along with TGR cinematographers Ben Dann and Justin Fann - set out to explore Terrace, the mission was to be almost entirely sled-based. That being said, the area has remained relatively untouched by snowmobile access skiing. 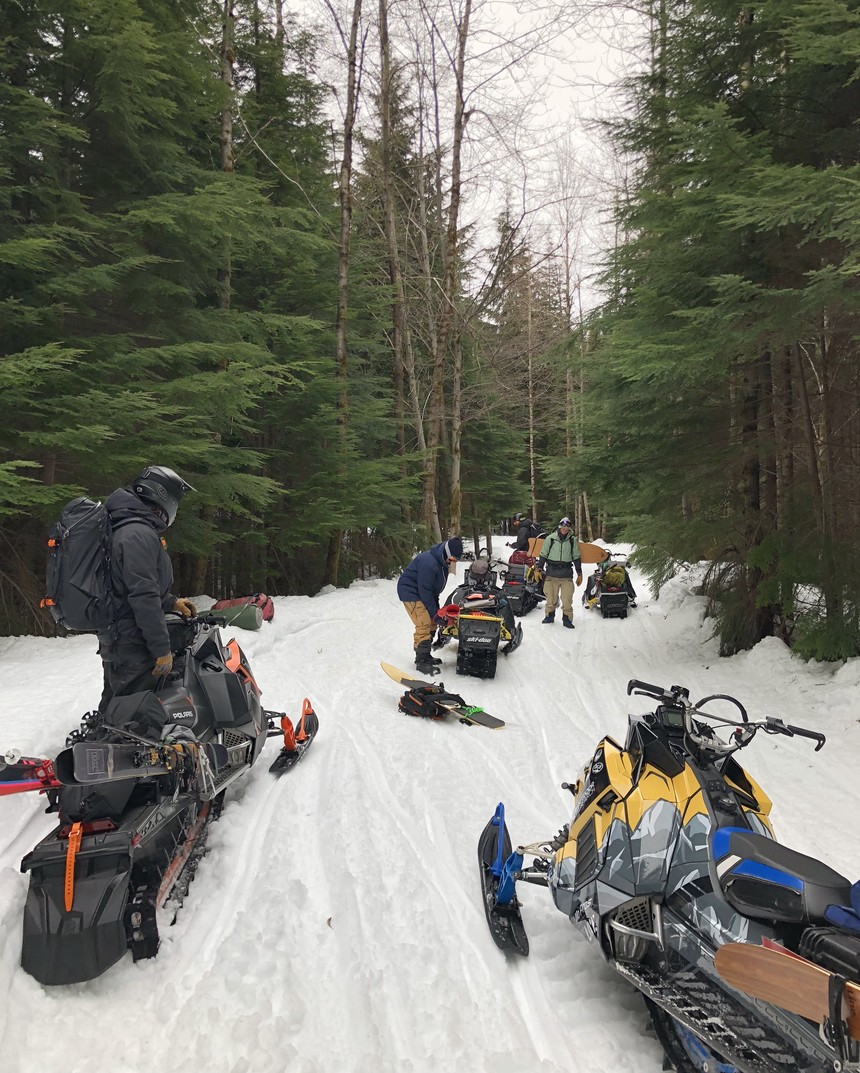 Just another morning, loading up the sleds and brapping up an unknown logging road. Parkin Costain photo.

“Terrace is a place you’ve probably never heard of before, and when you’re there it really shows you how many mountain ranges there are in Canada. If you’re willing to put in the extra effort, you can really get far out,” said Durtschi.

“The thing about the sled program is that you’re basically deciding what you’re going to do the night before, and you can go wherever you want. You don’t have to worry about the heli logistics or anything like that,” said cinematographer Ben Dann.

With so many new zones and different kinds of terrain, The crew struggled with choosing where to go,. That, paired with unpredictable snow conditions and unfamiliarity with the mountains there, was not quite what the crew had expected.

But Durtschi and the crew’s optimism and confidence in their abilities both on the sleds and on their skis made the trip one to remember. “The whole concept of the film was going far out and going to a location we had very little info about,” said Durtschi. “Not knowing what you’re gonna get into is tricky, but if we hadn’t have even tried, we would have never known.” 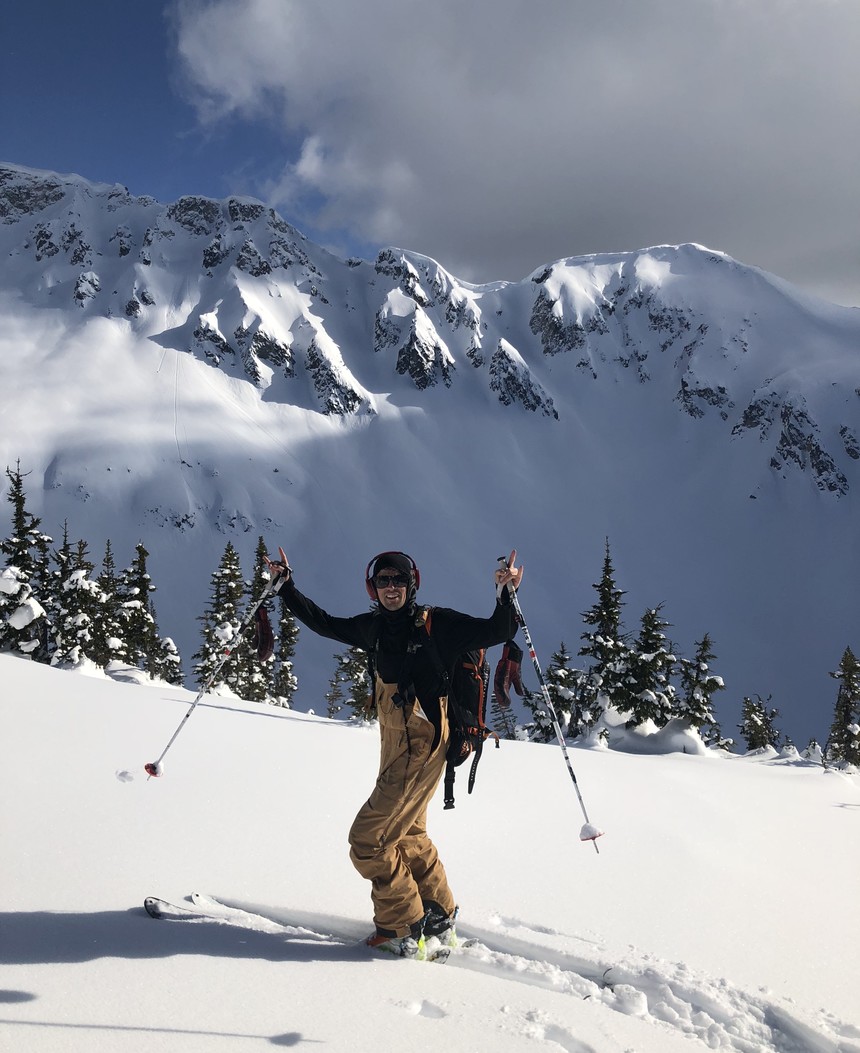 Colter Hinchliffe is no stranger to having a good time above treeline. After ditching the sleds, the crew would skin or hike out to big lines like these. Parkin Costain photo.

When they first set out exploring, Durtschi ran into countless trees with his sled. Many of their excursions along old, poorly marked logging roads resulted in 20-mile sled runs that wound up at a dead end. Miraculously, Durtschi's sled is still alive and kicking, even after his friends noted his cannon-like, all-out, all-the time approach to the sport.

At the tender age of 18, Parkin Costain was the youngest addition to the crew, but his youthful optimism coupled with the dynamic friendship between Durtschi and Hinchliffe made for a dream team in an unfamiliar territory. After spending this past season skiing with Kai Jones and Costain, the trip was sort of a microcosm for the direction that Durtschi’s past season took: bridging a generational gap in skiing.

“Each generation brings a new, fresh outlook to the sport. It shouldn’t just be the vets skiing with vets and groms skiing with groms,” said Durtschi.

Terrace’s close proximity to the coast blesses it with a snowpack similar to that of Whistler: deep and heavy. Most of the snowmobile trailheads were undeveloped, so there was a lot of pioneering on the sleds. For any other crew, that may have been a sore point of the trip and led to feisty blow ups and frustration. But Costain, a capable snowmobiler brimming with optimism, was always successful in bringing up the energy of the entire crew. 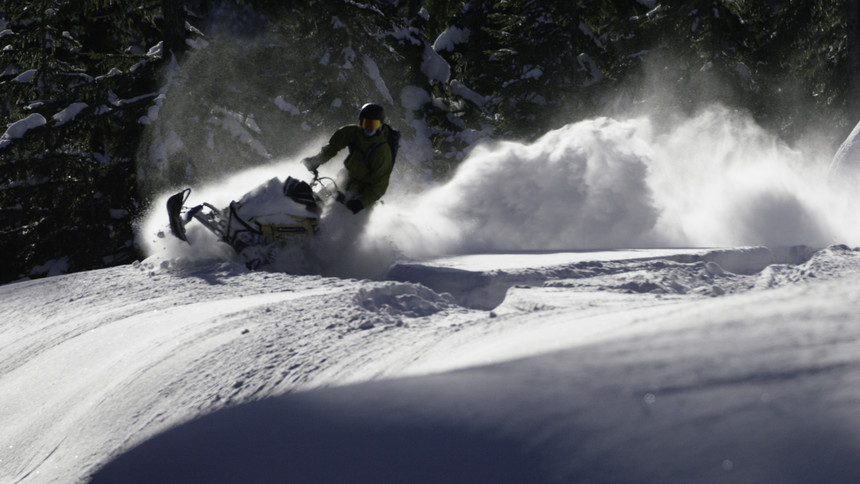 Even at just 18 years old, Costain sleds harder than most of them. TGR photo.

“The backcountry was pretty different from what I was used to,” said Costain. “But we spent time on pillow poppers in the lower forest, and there was fun, bouncy snow. We just had to put in the effort to find it.”

With almost too much terrain to choose from, the crew was feeling a bit overwhelmed by the vastness of the area until they got in touch with local skier Brad Zeerip.

Zeerip is a legend of sorts among locals. Known for his Youtube channel BC Ski Junkie, he is that guy who is always in search of snow, no matter the season. That’s why it’s no surprise that Hinchliffe looked him up prior to arriving in Terrace, as a good resource they could hit up if need be. According to Dann, Hinchliffe really drove the mission and was motivated to figure out what was out there and to plan each day, so it is no surprise that he led the charge on finding local resources to improve the trip.

Alas, after spending a few days traveling through the backcountry and not finding what they were looking for, the crew called up Brad. He was stoked to help them find some great lines amidst some less-than-optimal conditions. “Brad was our terrain sensei. He’d invite us over to zoom in and out of Google Earth and we’d discuss how we were going to tackle that area,” said Dann. 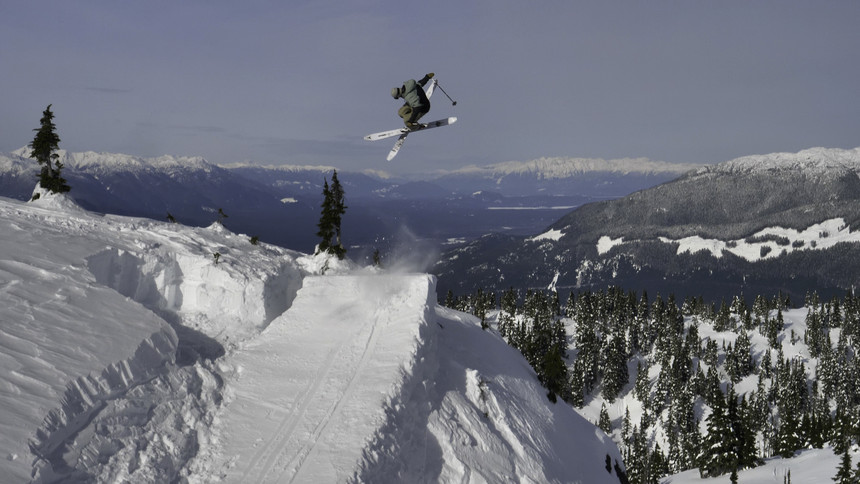 After scoping for a few days, the boys found a jump worth writing home about. Tim Durtschi styles a trademark spin off the lip. TGR photo.

Before they knew it they were slugging back beers and playing pool with Brad and his wife while their laundry was churning in the room next door. Simply put, the local community is tight-knit and people like Brad were more than happy to share their home and playground with some outsiders.

Apart from just their local guide, Costain and Durtschi said that the love for the mountains in and around Terrace is evident in the local culture. “It’s this city surrounded by mountains, and everyone there is just super into having a good time; everyone is just stoked to be doing what they’re doing,” said Costain.

The people of Terrace, BC are purebred mountain folk and Brad Zeerip is the epitome of Terrace’s character as a town: a dedication to and passion for preserving the stunning mountains in their backyard while also welcoming visitors with open arms, so long as they are there for the right reasons. The fact that residents chose to live in the small town of Terrace over the more popular destinations throughout the towering mountains of British Columbia speaks volumes about what the community values. In the words of Tim Durtschi: The locals are all about their mountain, their terrain, and holding onto their unique little corner of the planet.

Reflecting Back on One of Chamonix’s Best…