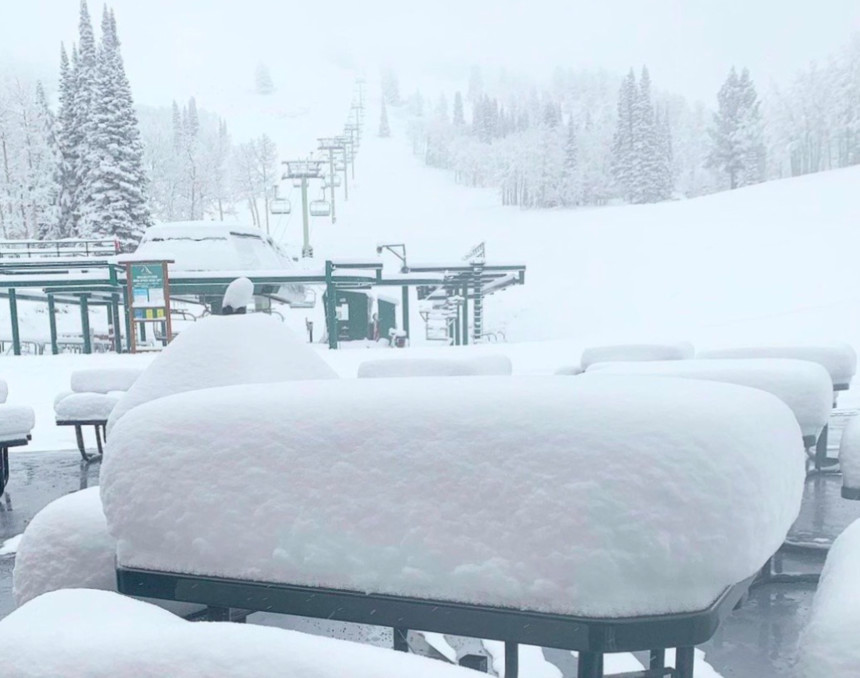 Checking in this morning from the Ghee! Grand Targhee photo.

Heavy snow will be falling over the next seven days favoring southern Coastal BC, The Pacific Northwest and a good portion of the northern Rockies. The pattern will continue well into next week. 17 inches of pow fell at Crystal Mountain yesterday! Winter-like conditions are upon us many ski areas that are developing early season bases for some epic openings. Alta had 30 inches last weekend, Solitude close behind, and just last night the Mid Mountain Snow Telemetry at Jackson Hole Mountain Resort measured 14 inches from the previous 24 hours. Ironically, while COVID cases set new records, Ski Resorts in the west will be hitting new highs for November. Folks are already out skinning! Caution: Low Tide below the new light density snow, and an Avalanche was already reported on Independence Pass near Aspen.

Wolf Creek in Colorado had 38 inch storm totals (Sat-Monday) Significant snow also fell in many other spots of the San Juan Range of Colorado.

Below: Crystal Mountain Ski Area via a tweet last night.

The next seven days will be very active with several storms lined up in the Pacific.

The Cascades of Oregon and Washington grab another deep dump late Thursday into Friday, with snow showers continuing into Saturday. Decent amounts are also likely for Whistler in BC who could see up to a foot thorough Friday evening. Areas further south in Washington and Oregon could easily grab two feet or more. Temps will be perfect for early season snowpack sitting just around the freezing mark at the bases.

Below: Total snowfall through Saturday for the Pacific Northwest. Very significant snowfall - especially the Western Cascades. The highest amounts might land in the south/central Cascades of Washington and a good portion of Oregon.

Below: University of Utah Plumes based on multiple Ensemble runs showing up to 30 inches at Mount Bachelor late this week into the weekend.

Below: Temps for the Cascades in Celsius at 4800 feet near the freezing level. (Snow to most base locations). Colder further north in BC, Northern Cascades, and interior. Snow should be falling at most Ski Area bases that range between 3500 and 4000 feet late this week.

The Rockies will once again see decent snowfall over the weekend. Models are favoring much of the southern panhandle and western Idaho, Tetons, and Wasatch of Utah. Amounts are likely to exceed 12-18 inches by late Saturday or early Sunday for many areas of the northern Rockies. The Sierra will be on the northern edge of the heaviest moisture so resorts on the north side of Lake Tahoe might come up with a moderate surprise. Colorado will benefit primarily late Saturday and Sunday with areas north of I-70 perhaps exceeding 10 inches by early Sunday (Steamboat may be favored). Moderate amounts will fall further south in Colorado.

Below: University of Utah Plumes based on multiple ensemble runs showing 10-20 inches possible for the Tetons this weekend.

Below: University of Utah plumes for Steamboat Colorado for late Saturday/Sunday showing a mean of 10 inches.

Looking further out, a break in the action for the Northwest is due late Saturday before another potent storm brings additional heavy mountain snow late this weekend into next week. Some of this might filter out over the Rockies and northern Sierra (Too far out to forecast with confidence).

Below: Low pressure trough entering the Pacific Northwest once again early next week. Low pressure also noted in the Northeast with some snow possible in northern New England.

Please support Powderchasers by either joining the powder concierge or making a donation for our powder forecasts. The Concierge gets you custom chase forecasts and travel tips. The donations are used to support our forecasts.

Cool stuff guys. Nice to see some young eyes on our footage! Thanks!

As part of the 2020 Winter TGR Grom Comp presented by GoPro, we are stoked to announce the GoPro monthly winners! With the snow finally falling, these three grom edits got us fired up for the upcoming season. So, without further ado, the three monthly winners are Simon Karroum, Solomon Fragakis, and Olin Speare. All three winners will receive a brand-new GoPro Hero 9 camera, and we’re stoked to see what they’ll capture with it this year! Simon Karroum (Best use of GoPro POV):