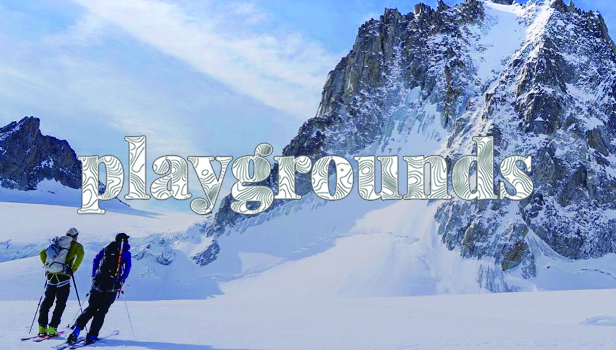 Ah, the land of croissants and red wine. Chamonix, France is to extreme skiing as Yosemite is to rock climbing, or Pipeline is to surfing. In a nutshell, the legendary mountains surrounding Mont Blanc have drawn the attention of the world’s best skiers and snowboarders looking to ride the biggest lines of their lives. Each year, a veritable pilgrimage of riders convenes in this magical valley in the French Alps to put their alpine skills to the test.

So far, the 2017-18 season turned out to be one for the ages, with record amounts of snowfall filling in lines that were never thought possible, and nearly every day since January bringing conditions that riders normally only dream of. Anyone with an Instagram feed was surely tuned into the madness of pow day after pow day. To most, however, the best part of Chamonix is not just the riding, it is the entire culture and community surrounding a love of the mountains.

Making new friends, re-connecting with old ones, and sharing everything from steep pow turns to delicious croissants before and after skiing is what it’s all about here. So much so that nearly everyone we talked to who has been there has made it an absolute must to come back year after year.

Here are the highlights of conversations we had with those who experienced this epic season in Cham. Spoiler: the skiing is amazing, but it’s mostly the croissants that keep them coming back. 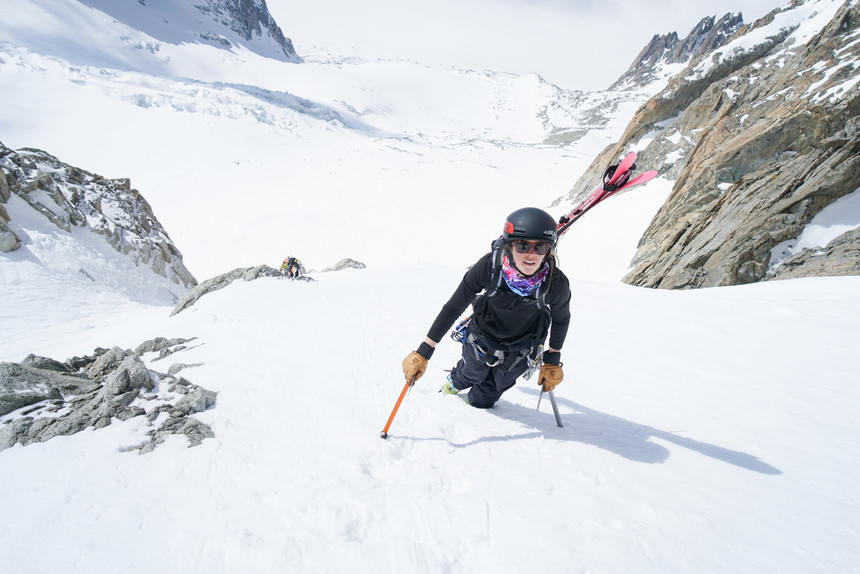 The skiing in Chamonix is often not just about the skiing. Most lines require a lot of this to get on top of. Leslie Hittmeier photo.

Hadley Hammer–who at this point is seriously considering making Cham a second home–recalls some of her favorite moments from this year and seasons past.

"There’s something about Chamonix that seems to pull at my heartstrings. Maybe it’s the endless steep lines that litter the valleys. Or it’s the beautiful rock walls, begging to be climbed," Hammer told TGR. "It could be the high energy vibrating off the quaint town walls as climbers, skiers, and mountaineers return from their adventures. Or maybe, it’s the croissants. Most likely it’s the combination of eating croissants at the top of steep lines."

A few years ago, Hammer went to Cham for her first Freeride World Tour comp. For years, the area hosted the Tour and drew riders in, but most came back to explore deeper into the crazy peaks surrounding the area. 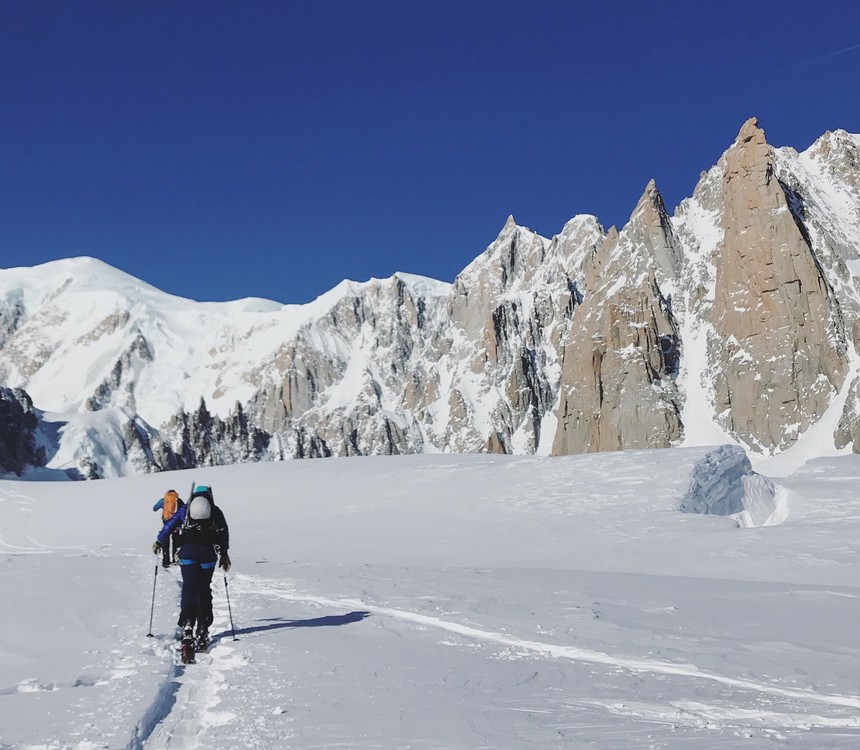 Walking amongst the giants is a daily occurrence. Leslie Hittmeier photo.

"I remember waking up in my hotel room, pulling open the curtains, and just being blown away as the sun rose over the Alps with the top of the iconic Midi tram glowing in the morning light," Hammer said. " But for those first two years in Chamonix, my skiing was focused around competition. We stayed on the Brevent side of the valley. I didn’t have touring skis. I didn’t explore outside of one guided day with my brother, his wife, and Griffin Post."

But as her career shifted from competitions to filming and expeditions, Hammer knew she had to go back to Cham.

"I knew if there was any place in the world where I could expedite my personal learning in the mountains, that it would be in the French Alps," Hammer said. Whether it was the massive peaks, creative ropework needed to access steep lines, or the unique apres character, it all proved too hard to resist, so she went back. 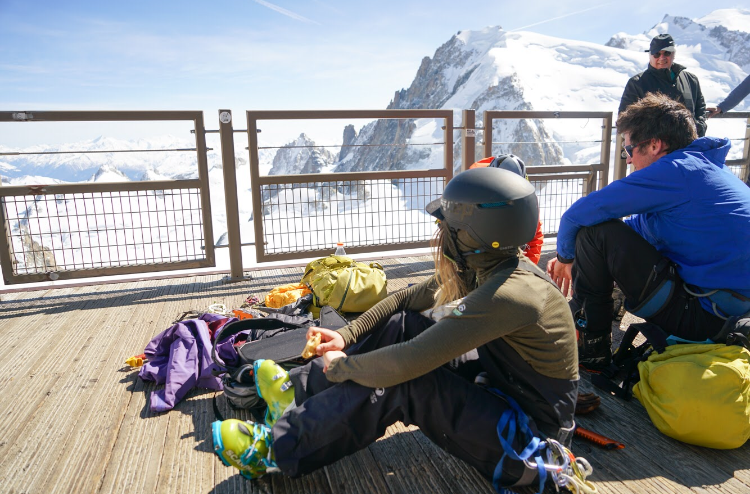 While the mountains may be wild, the infrastructure and lift access is unparalleled. Leslie Hittmeier photo.

"Last year, I went to Chamonix with my roomates Ben, Leslie, and Blake. Our first ski was up the Y couloir in the Argentiere basin," Hammer said. "After a short ice climb, and about 1,300-foot bootpack we made it to the top in a complete whiteout. We ended up skiing by braille down the Milieu Glacier, and while a little sketchy, it was freaking amazing. Truly."

"The rest of the week, we skied amazing steeps and climbed the Aretes des Cosmiques," Hammer continued. "And we gave four honest tries in skiing the North Face of the Tour Ronde. We started every morning filling our packs with croissants, brioche, baguettes, and fresh orange juice, then proceeded to ski hard all day. Finished with an espresso, cheese, and a Genepi. Life in Chamonix is simple: the richest kind of simplicity. Eat good food, ski steep lines, and repeat."

With insane amounts of snowfall and a solid friend group already in the area, Hammer couldn't wait to return again this year.

"This year I came back, eager to learn more. My friend Maddie Crowell and I really wanted to be dependent on ourselves," said Hammer. "We didn’t want a tour guide. We wanted to figure out the conditions, the routes, the skills we would need to be in these mountains. This meant that sometimes we got completely skunked. But sometimes we also skied epic pow. And luckily for us, the quality of croissants was always high." 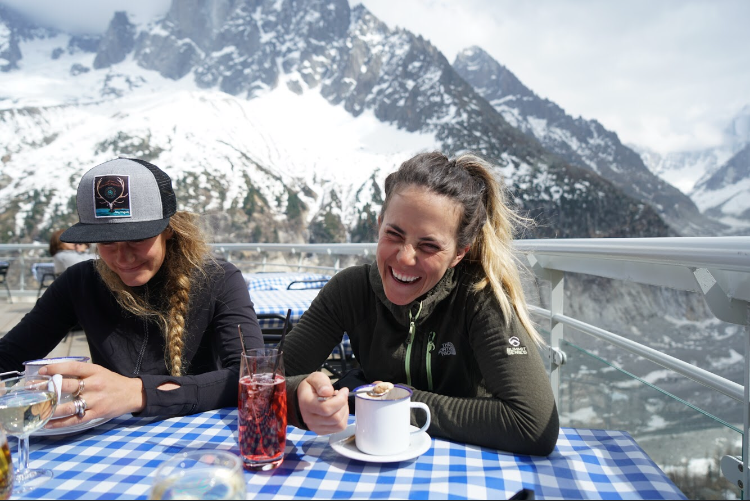 The best part of the day? Après. Leslie Hittmeier photo.

So, croissants it is. And friends. And simply the appeal of experiencing these extreme mountains in a way that nowhere else in the world can do.

"I will return to Chamonix every year. Most of the time I wonder why I don’t just move there," Hammer said. "It’s a place to go to be inspired. A place to go to learn. A place to live a high quality of life. The mountains pierce the skyline-always visible from downtown. A reminder that they are there for you to enjoy. Also, that they need to be respected. Respected with knowledge and humility, curiosity, and excitement." 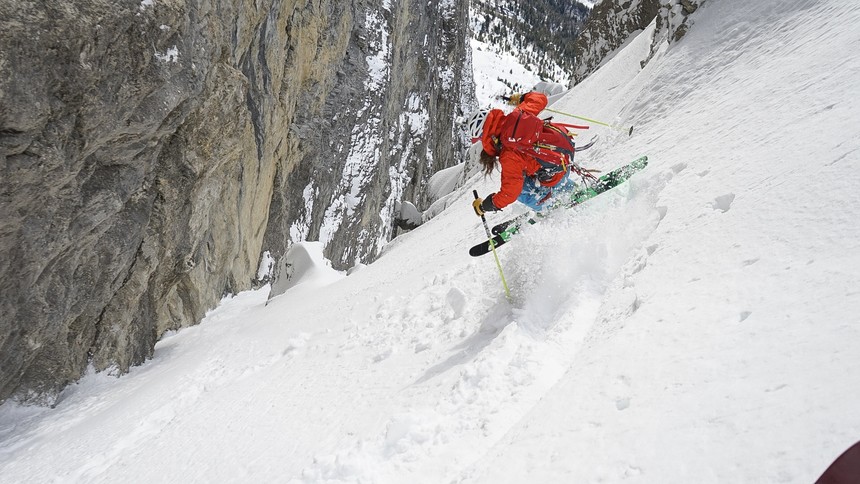 To Colorado's Teague Holmes, who has been quietly flying beneath the radar as one of the strongest American ski mountaineers ever, Cham became home for nearly three months this year. We caught up with him as he was hanging out at the top of the Aiguille du Midi Tram on a sunny April morning. Much like Hammer, the draw of Chamonix proved too powerful to resist after several shorter trips, so he came back and stayed for a whole season.

"Cham is this magical place with this incredibly ideal mountain setup. Anything you do in the mountains, this is the place where it’s just set up to do that in every way you can really imagine. You can ski, you can climb, you can fly, and you can just hang out take it all in,” says Holmes.

Not only can you do all these things, but the access and infrastructure provided to do them like trams and huts is unlike anywhere else in the world. The mountains are huge, but this makes them in essence smaller, and covering massive amounts of ground in a day is normal. 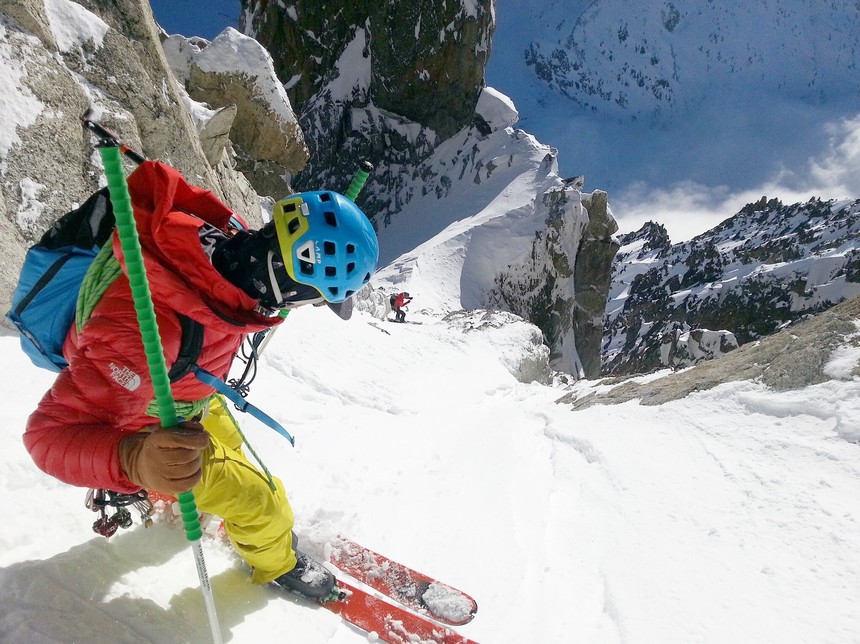 On his third day in the valley, Holmes managed to repeat one the gnarliest lines in Cham. Teague Holmes photo.

This year’s snowpack provided plenty of opportunity to do that. “It was insane this year with how good the snow was and how filled in the lines were. On my third day in Cham, I repeated a line that was only first skied in 2013 by Vivian Bruchez and Kilian Jornet, and we repeated this scary steep line on the Chardonnet,” recalls Holmes, “You can be here for several weeks and have to wait, but with this year’s snow the highlight of my trip was already on the third day!”

Holmes also speaks to how easy it is to make friends, especially when you are crammed into a metal box high above the ground with 50 of the world’s most stoked skiers and climbers looking out across a vast playground. “It’s a really wild and dangerous place with a lot of stress but coming back down at the end of the day, everyone just relaxes and revels in their day together over a glass of wine or a beer,” he Holmes. Sure, there are egos, but Holmes, who admittedly comes from the most ego-driven mountain town in the world, Summit County, CO, says making new friends was a daily occurrence. There’s a much better chance of getting to ski at Chamonix than there is at getting to ride a wave a Pipeline.

Yo! Not that it matters much, but that second photo you’ve got in Teague’s section wasn’t taken by him… as he is in it. That’s my photo, with Mikey Arno in the foreground, and down in the distance Teague treading carefully on our second ever descent of West-by-South-West, on the Aiguille du Chardonnet. A great day out, a highlight of the season for all three of us for sure.

That first photo is his though, on our late-season descent of the Gypaete Couloir. Not only is Teague an absolute beast in the bootpack, he also knows which way to point his lens. Everyone should ski with Teague, he’s the best.