Arc'teryx just jumped into the ski boot category for the first time with the release of the Procline Carbon boot, and I was fortunate enough to get a few days of skiing in it this month in the B.C. backcountry. Overall, I was impressed with its performance and its potential ability to change how backcountry skiers travel in the mountains.

In order to understand the boot, you have to first understand who it is designed for. Arc'teryx created this boot for a new type of ski mountaineer emerging from the winter landscape. This is a person who will be complete long approaches in a variety of conditions, might encounter a bit of mixed rock and ice climbing on the ascent, and needs a boot with the ability to ski a steep technical descent.

In short, the Procline Carbon is lightweight two-buckle touring boot, weighing in at 1,190 grams in the lightest version of a 27.5 shell, which aims to be a gamechanger in the ski moutaineering world by utilizing what Arc'teryx calls a 360° Rotating Cuff. This design bit uses a three-piece heel to allow for both horizontal and lateral movement while in walk mode–meaning that sidehills get more evened out as the boot is allowed the flex side-to-side, allowing the ski, or foot in the case of ice or hard snow climbing, to stay flat on the snow.

Combine this with a bomber sole, built-in waterproof gaiter and solid skiability, and Arc'teryx might just have achieve their goal. They promise no compromises in any conditions that could be encountered in the high alpine, and kit the boot with one of two different liners depending on whether your focus is on uphill efficiency on downhill prowess. I'll outline some of the product's more interesting features below, and how this technology held up in the field. 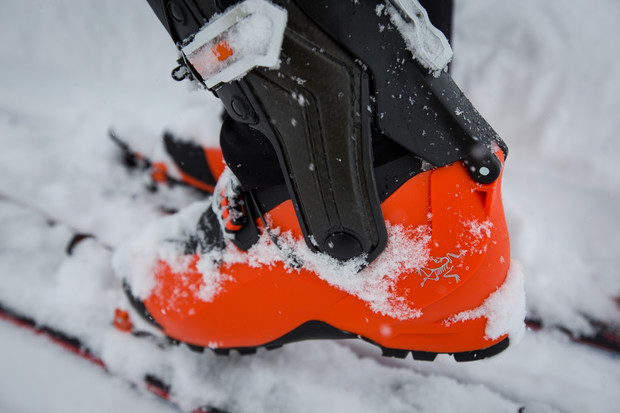 Here you get a good look at the three-piece upper cuff. The two carbon piece on the side are allowed to flex laterally when it walk mode by decoupling entirely from the spine of the boot. Arc'teryx photo.

Instead of a more traditional two-part construction touring ski boot, which only allows pivoting forward and back–with an astounding 75º range of motion in walk mode–but, with a 3-piece rotating upper cuff, also allows for 12º of lateral rotation of the exterior of the boot by completely decoupling the sides of the upper cuff from the spine of the boot. The left and right heel pieces are made of woven carbon fiber and the rear plate is carbon fiber-charged Grilamid plastic.

For descents, the cuff locks into ski mode with a simple familiar switch, that tensions and locks the three-piece upper cuff together with a cable.  A Camlock power strap booster designed without velcro can also be tightened down for a secure ski down.

The Procline has two liner options depending on what you value in performance. The first option, the Lite Liner, comes in at 180 grams and is focused on the uphill agility. The other is the Support Liner, which has more tongue and collar stiffness for aggressive skiers looking for better energy transfer to the ski. Both are fully moldable and have a single hand closure system. 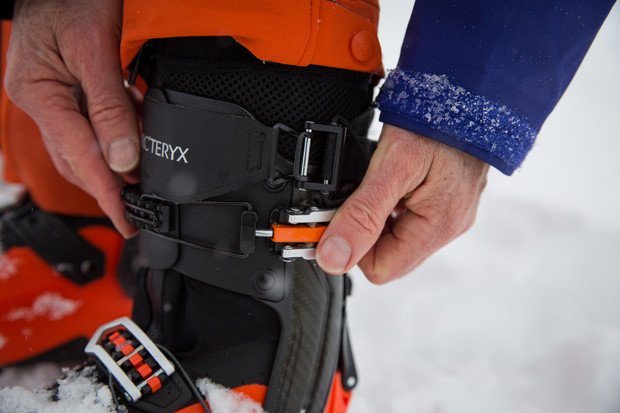 A good look at the cam strap. Arc'tery photo

This is the first ski alpine boot with a full water-resistant, snow-proof gaiter. This type of feature is typical found on other mountaineering footwear, but has yet to make the jump to ski boots. The gaiter is completely integrated with the lower shell, and zips from the forefoot to the top of the shin to completely insulate the boot liners. Watch the video at the top for a full demonstration of this feature.

The sole of this boot is a collaboration with Vibram, which produced a rockered sole for walkability and molded rubber toe cap. The tread is designed for grip and protection, as well as crampon integration. The shell of the boot is again made with Grilamid for stiff support along with minimal weight. Another mountaineer-inspired piece of tech is the hybrid closure system, which includes a two-point cable adjustment for a secure fit. 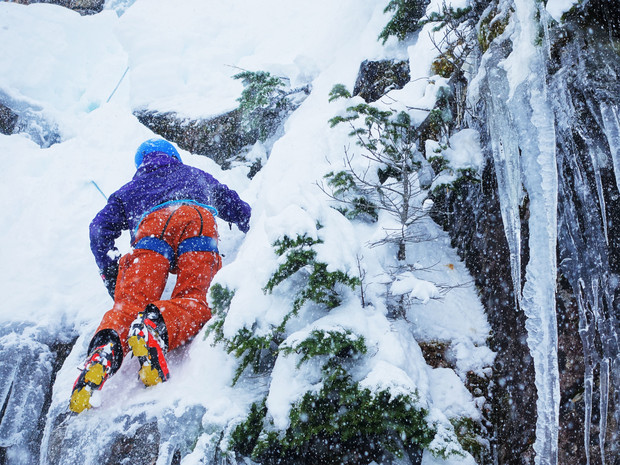 Ryan Stuart gets sendy on the ice in Callaghan in the Procline Carbon. Jonathan Desabris photo.

The uphill is where the Procline really shined. First, the amount of movement made for a really natural skinning motion. The lateral movement in the cuff was impressive and definitely noticeable on more difficult sidehilling skin tracks. When I was in steeper sections, I could really dig in the inside edge of the ski by moving my center of gravity over it. I didn't get into any crazy steep tracks, but it made sidehilling infinitely easier and more comfortable. The Lite Liner was flexible for the uphill, allowing for a fluid touring movement back and forth.

I really wanted to see just how snow and water-proof the gaiter was, which I think is really one of the ingenious features of the boot. Not once while skiing did I ever experience wetness in the boot, and my feet stayed warm and dry. To really test the gaiter, I crossed a creek at the end of one of my ski days. The water was only 4-5 inches deep, but the boots held up pretty great. My socks got a little damp, but if you are in a pinch and need to cross something you should be okay. 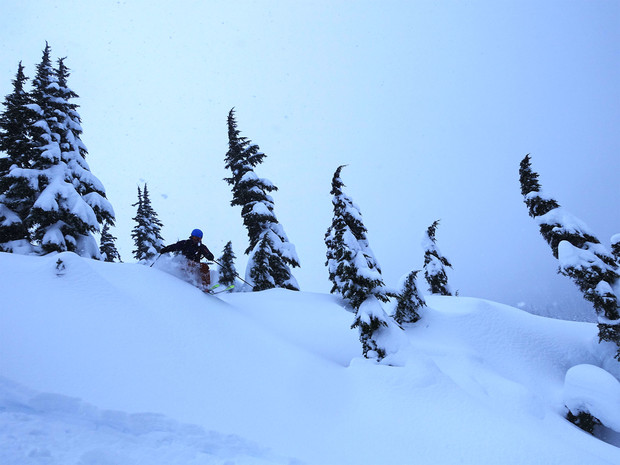 These boots can still ski, which to us is the most important part. Jonathan Desabris photo.

I have to admit, I was pretty skeptical about the Procline's skiability at first. When we arrived in B.C.'s Callaghan Valley to test the boot, it was puking wet, heavy flakes. My mind wandered to my stiffer Scarpa Freedom 130's as I pondered what sort of control I would have over my skis in the deep, heavy coastal snow.

To my surprise, I was impressed with how the Procline skied. Designed to power a ski with a 95 mm waist, I still felt comfortable making precise turns in tighter trees with my Black Diamond Boundary 107's. What really helped was cranking down on the booster strap, which in the field was super easy to get at with gloves. This was all while using the Lite Liner, which provided enough support to control the ski in these challenging conditions. 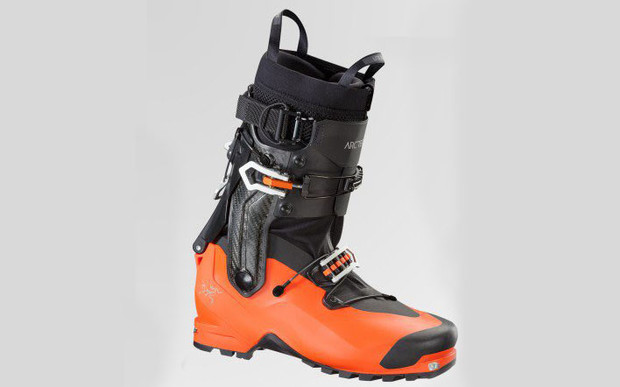 Arc'teryx has done something pretty special with the Procline, putting together a product with some really interesting features designs to accommodate sporting climbs while still skiing well for its light weight and intended user. It will be available in three versions: the Procline Carbon, the Support–a heavier, cheaper version with carbon-injected Grilamid plastic–and a women's version of the Procline Carbon. Each can be outfitted with either liner based on your preference.

If you are someone who is looking for a ski mountaineering boot that does everything pretty well in one package, while making more difficult skintracks that much easier and more comfortable to manage, the Procline is a great choice. If you are only looking for a boot to tour the sidecountry, do some serious freeriding, or huck massive cliffs, I would steer towards offerings more explicitly geared towards freeriding. The Procline lineup of boots will be available next fall, with the Procline Carbon on sale for $1,000.

Be sure as well to check out our piece on Arc'Teryx's new airbag, the Voltair, a new battery-powered fan airbag similar in concept to the Black Diamond Jetforce.

Trek's new Slash 9.9 might be as aggressive as single-crown bikes get, but it's also a versatile tool that will make a good rider feel like a great rider in just about any kind of terrain. | Max Ritter photo. There are few things that can bomb down a trail like a long-travel 29er. When Trek described the new Slash as “monster truck meets magic carpet,” it sounded like their marketing team had gone a little COVID-crazy, but I’ll admit it was seriously intriguing. I mean, if anything’s

Turns out XC bikes aren't just for lycra-loving hardos. Juliana's newest XC bike—the Wilder—might be advertised as a racing machine, but its geometry lends itself to all kinds of terrain. Luke Toritto photo. XC Bikes are underrated. There I said it. I can hear my enduro-bro friends gasping in horror, wondering if I’ve abandoned baggy shorts and long travel completely. I haven’t, for the record, but the thing is you don’t have to be a world cup racer to see the value in a short travel