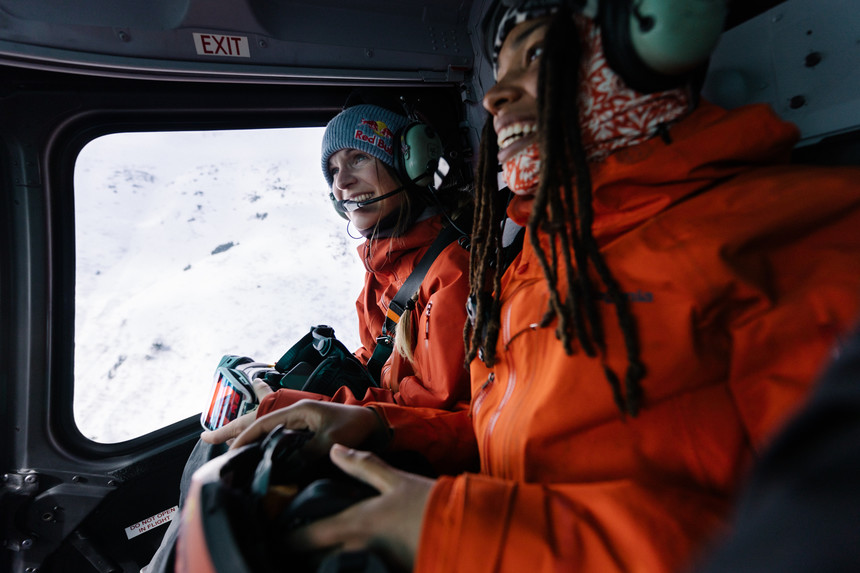 Without a doubt, these scenes evoke serious stoke from those of us who live for winter. But Nexus, the first feature-length film profiling all women skiers, and directed and produced by an all-female team, delivers all of this, and way more.  Catch the full NEXUS film here.

Featuring five pairs of female skiers with diverse backgrounds, varied motivations, and special connections to the mountains, this captivating film illustrates a truth many of us know from experience: time spent exploring the high country forges bonds that last well beyond the mountains climbed or lines skied. Through a series of beautiful skiing sequences exquisitely balanced with a deep dive into storytelling, we are carried along on adventure after adventure where catty-competitive girl stereotypes are shattered by real-life illustrations of friendships steeped in support (Finally! Thank you!). The film also bravely highlights bigger issues (e.g., the challenges that have faced women vying for a voice in a historically male-dominated space), and raises big questions (e.g., how can the industry be more inclusive?). In short, Nexus gives voice to skiers, connections, and topics that haven’t gotten the screen time they deserve. Until now.

One of the highlight segments features legendary big mountain skier Michelle Parker and up-and-coming free rider Brooklyn Bell scouting and crushing intimidating terrain in Alaska's Chugach Range. Though they’d previously bonded on multiple mountain bike trips, Nexus brings us along on their first ski journey, and man, is it magic. The mutual admiration between these two rockstars is palpable. Brooklyn’s determination inspires us as she soaks up and then executes Michelle’s specific suggestions for tackling a big spine. Michelle’s joy while watching Brooklyn crush it oozes through the screen. Through intimate and authentic scenes, Nexus showcases not just the technical mentorship required to ride huge AK lines, but also the soft skills of mental, physical, and emotional preparedness. We also see that the way women lift each other up is just different. 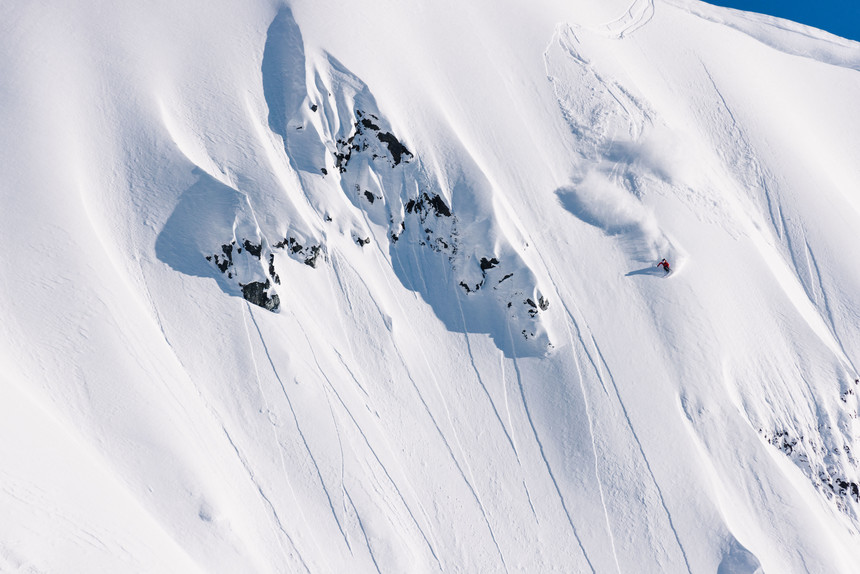 Clearly, these athletic powerhouses are bonded by a love for shredding, but through conversations off the mountain, we see their deeper connection stems from a desire to change the industry by asking tough questions (and forcing brands and sponsors to address them), speaking up for what they need, and inspiring other women (and underrepresented individuals who don’t always feel like they have a place in the industry) to take up space.

We caught up with Michelle and Brooklyn to learn more about what it takes to drop in at the very top.

TGR: Michelle and Brooklyn, can you describe your relationship?

Michelle Parker: After riding together a few times,I totally trusted Brooklyn’s wheel. Often when I’m in the mountains with another woman, I get to the place where I trust them more than even myself. They push me. They have more confidence in me than I do. So, when they say, ‘I think you can do this,’ I believe them and I can do it. Brooklyn’s become this for me.

Brooklyn Bell: We’re real actual friends, not just internet friends and not just people who work together. I walked into our relationship thinking that she would be a big mentor to me, but I also saw the way she processes things. She’s such a student so if she’s ever given the opportunity to be coached, she is super present. Those are qualities I want to bring into my skiing and biking. 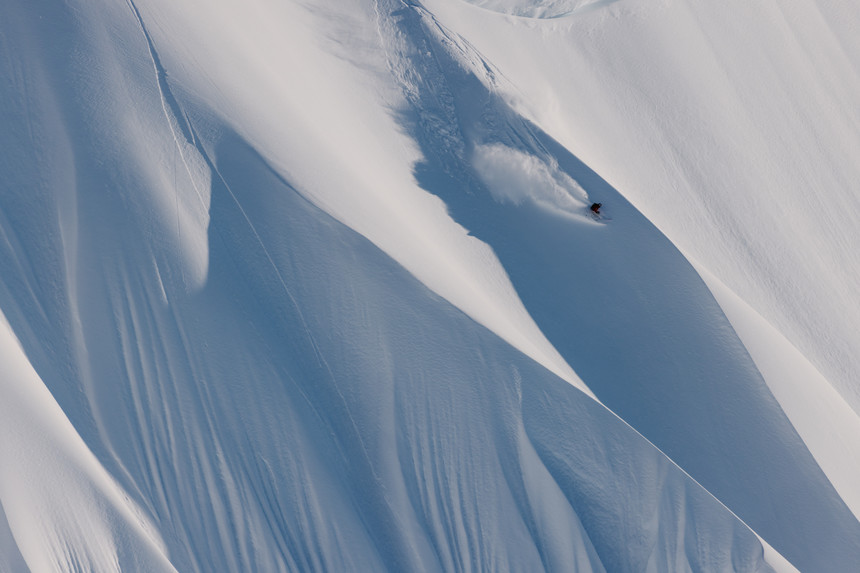 TGR: How did your involvement in Nexus come about?

MP: I had never skied with Brooklyn, but then this pitch came through and it said: ‘Michelle mentors Brooklyn.’ And I thought, ‘Wait a minute. It’s been the opposite.’ She’s been showing me around on bike trails for a long time so I wanted to make sure they knew that. This idea of mentorship is really a symbiotic relationship. She pushes and teaches me and I push and teach her.

TGR: What was the coolest part of skiing together in Alaska for the film?

MP: When she’s biking, Brooklyn has this amazing confidence. She gets her mind set for something and goes for it. It was amazing seeing her scope out lines in massive Alaskan mountains even though she’s only been skiing for six seasons and say: ‘I can ski that.’ Also, I was really impressed with her ability to shake it off after she fell. Plus, she said ‘I wanna ski that again.’ To which I said, ‘Hell, yeah!’ Getting a second chance to ski a line is unusual when making a ski film since there’s already a track in it, but Brooklyn is new in this space so she sees everything in a different light. She has a beautiful perspective and a different approach, and it must be said that part of this comes from the fact she has a different background. 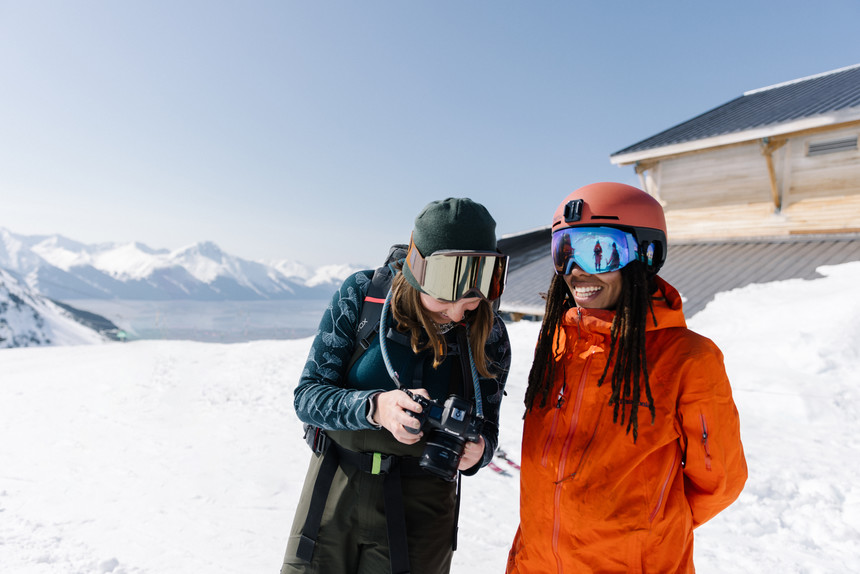 Photographer Katie Lo shows off some favorites after a run in Alaska. | Shannon Corsi photo.

BB: My goal was to get practice, to progress and not always nail it. Big mountain skiers don’t always get to practice though. But when I fell, our lead guide was awesome. He let me try again and Michelle encouraged me. I think women and black women don’t get the opportunity to try, right? We don’t get the opportunity to crash. It was a privilege to not be perfect and just experience everything to the fullest. Another cool part was being able to share this with Michelle. In my skiing career, I’ve skied with mostly all women and seen an incredible amount of women’s leadership from skiers, photographers, filmmakers. But it was cool to be there with Michelle because she hasn’t experienced that.

TGR: What’s different about being outside with women?

MP: I grew up in this industry and was often the only girl. I wasn’t even sure how that held me back until I finally got into the mountains with women. Being out there with women helped me level up because of the different kind of support I got. For example, if I saw Elyse Saugstad hit a massive cliff, I got amped up and wanted to do it, too. But, if I saw a guy do it, I got in my head that I probably shouldn’t do it. I was in a weird headspace of not feeling confident enough because I was intimidated by guys. So being out with other women inspired me to push myself, to have more confidence. We empower each other in a different way. We lift each other up in a different way. It happens so naturally and beautifully in a group of women.

TGR: In Nexus, you mention the idea of Michelle laying the groundwork for you. Tell me about that.

BB: I have so much admiration for Michelle (and other women like Ingrid) who had to show up in a male dominated space, often as the only or ‘token’ woman. I have so much respect for all they’ve done and all they’ve had to go through in the ski industry. I know it’s taken a lot of work to get here. Also, I’ve studied the way Michelle skis and watched so much of her footage. She really laid down a blueprint that helped me progress. In this way, she’s helped so many people and given so many people resources to do what she’s doing. She’s also been outspoken about ways the industry can change and be more inclusive. She’s been very vulnerable and honest. I totally appreciate that.

TGR: In the film, you seem so truly stoked when Brooklyn crushes a line. Tell me about this feeling.

MP: When I see a friend succeed, I think ‘Imagine if that was your sister and you watched her do something epic. You would be so stoked.’ That’s how we all should react. That’s your family out there. Seeing Brooklyn succeed and crush it, brings me so much joy. We should all be supporting each other this way. And honestly, that’s the legacy I’d like to leave: I want to be as supportive as humanly as possible. They say, ‘A rising tide lifts all ships,’ and I believe that through and through. Being supportive individuals lifts us all up. It makes us all better. 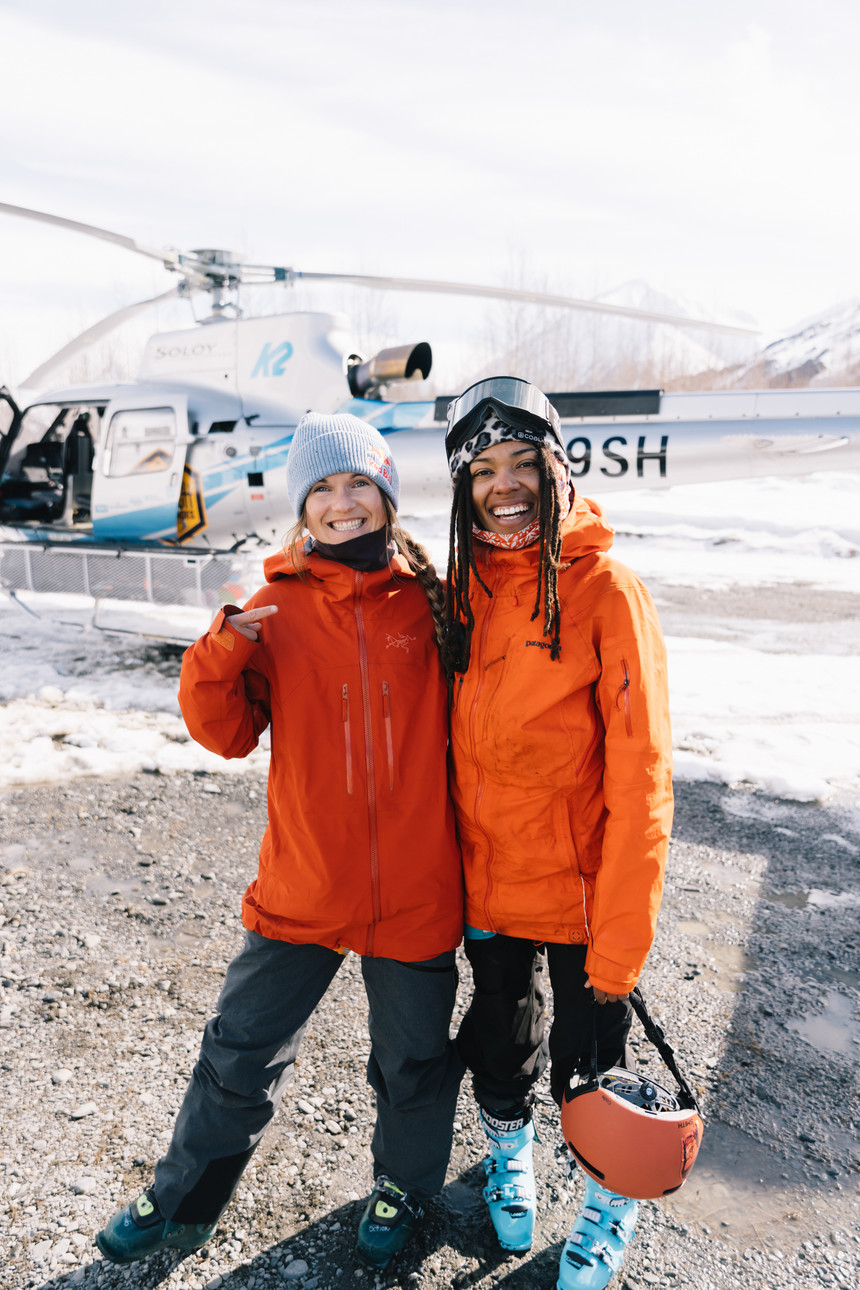 TGR: In Nexus, you mention joy as a form of resistance. Can you explain more?

BB: There’s a lot of pressure to be super bad ass, crazy and perfect. Sometimes when people get the opportunity to go to AK, the pressure takes away the fun. But I refuse to leave such an amazing, powerful, privileged experience disappointed in myself. So, for me, bringing joy to high level skiing is resistance to it all. Having the most fun, using the most creative lines, sharing a line with someone, realizing there is more than one way of creating a ski film, is all resistance. There’s lots of different ways we can change things from within, and for me, the greatest is having fun and soaking it all in.

TGR: What’s one thing you would tell your younger self?

MP: Take the initiative more. Take matters into your own hands. Be the change you want to see like the girls who wanted a movie like this and decided to go for it and make it. Create what you don’t see, but want to see out there.

Really really want to make a journey like her