The west has featured decent high elevation snow this season, with spots like Jackson Hole and Grand Targhee having solid snow coverage, but in general, the early season hasn't been great to the western U.S. In fact, if you were to compare the annual snowfall at Squaw (80 inches YTD) versus Jay Peak in Vermont (185 inches YTD) you might think you were living in an opposite reality.

But, fear not, all you West Coast skers and snowboarders, because the flood gates should open this week with multiple feet of fresh pow expected in the Sierra and Pacific Northwest  in the next 7-10 days from two storm cycles, the first of which will hit by midweek.

The next 7 days will feature a more typical mid winter pattern of colder temperatures and several periods of moderate to heavy snow. Lake Tahoe will finally see heavy snow at lake level late this week with 2-3 feet in the mountains through Monday.

If you're chasing powder, the highest amounts this week will be found in the Pacific Northwest, Sierra, and Idaho. Moderate amounts are also going to hit the Tetons and Wasatch Thursday night into Friday. Colorado will attempt to catch up Saturday with models pushing some teases into northern Arizona and perhaps New Mexico.

Moderate amounts are likely for other areas in the west including the Rockies and even the four corners in the 7-10 day forecast. Idaho will see heavier snowfall especially Thursday/Friday and Sunday/Monday.

The best news is colder temperatures late this week that will bring snow to nearly all base areas of most ski areas.

Moderate to heavy snow will break out over the Cascades of Washington and Oregon late Wednesday through Thursday. Colder temps should drive the snow levels to below pass levels. Expect a wide area of 7-12 inches for first chair on Thursday.

Mount Baker may see higher amounts with SW wind direction that tends to favor the north. Stevens, Snoqualmie, Alpental, Crystal, White Pass, Timberline Meadows and Bachelor won't be far behind with double digits being reported Thursday morning. Snow will continue into Friday albeit lighter intensities. The northern Panhandle near Schweitzer Ski area should also score. All these areas will see good quality snowfall with a cooling trend. Both Thursday and Friday have your best odds of deep snow before another system moves in for the weekend. There may be little to no breaks between systems.

The Sierra grabs heavy snow late Thursday into Friday. Temps will start out warm Thursday (7,500-foot snow levels) and drop rapidly in the evening bringing 4-8 inches to lake level and 7-12 inches to the mountains. The last system over a week ago significantly favored areas from Kirkwood to Mammoth (South) where this system may slightly favor northern resorts. Snow continues in the Sierra on Friday (additional accumulations likely) with NW flow and much colder temps. Quality will be the best they have seen all season. Snow showers continue into Saturday morning as a break between storm systems is likely (Bluebird pow day). Total snowfall through Saturday should range from 8-14 inches.

Snow moves over the Sierra and most of Idaho and the northern Rockies on Thursday/Friday. Highlights may include most of central or southern Idaho. The Tetons are a wildcard with some models showing moisture edging further south or east. I’m confident in 4-8 inches and slightly less confident for 6-12. Utah grabs snow during the day on Friday with the cold front. NW flow Friday should bring a solid 4-9 inches to the Cottonwoods Friday. Sun Valley and areas north into the Sawtooth mountains of Idaho are likely to score the highest amounts by Friday morning (3-7 south and 5-10 north).

Leftovers hit Colorado on Saturday and Sunday. SW wind direction should land some moderate snow for the 4 corners late Friday-early Saturday before pushing into central and northern Colorado early by early Saturday with a wind shift to the N, NW. This will bring moderate snow to most of the I-70 corridor during the day Saturday (Last chairs) and early Sunday. Currently I am forecasting 3-7 inches for these areas by late Saturday night. Models will provide better accuracy as we get closer.

The forecast for late Sunday/Monday. Photo: Courtesy of Meteostar

Confidence is increasing for another round of heavy snowfall for the entire Cascade range on Saturday. The bulk of moisture may land a bit further south into the Cascades (Oregon) before it pushes into California on Sunday.

Heavy snow is likely with cold temps in the Sierra Sunday late AM through Monday. This may amount to another 12-15 inches of additional snowfall for many ski areas in the Pacific Northwest and Sierra. The current storm track is taking a decent amount of snow into southern and central Idaho late this weekend and early next week before sliding into the Tetons, Wasatch and most of Colorado Monday/Tuesday. That can all change as we're 5-7 days out, but currently, heavy snow is likely in central or southern Idaho that may trend to moderate as it works over the Rockies next week. 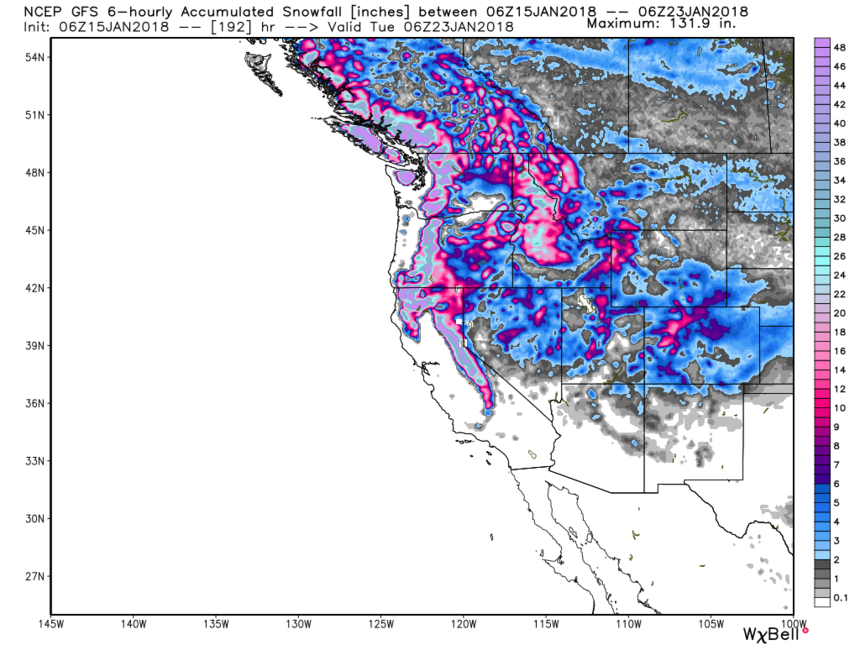 Total seven-day snowfall in the Sierra range through next Monday (2-3 feet is likely). Photo: Courtesy of WeatherBell.

Let's hope the models all hold up with the current trends. Looking further out at long term forecasts we may see a brief return of high pressure for the west towards the middle to end of next week