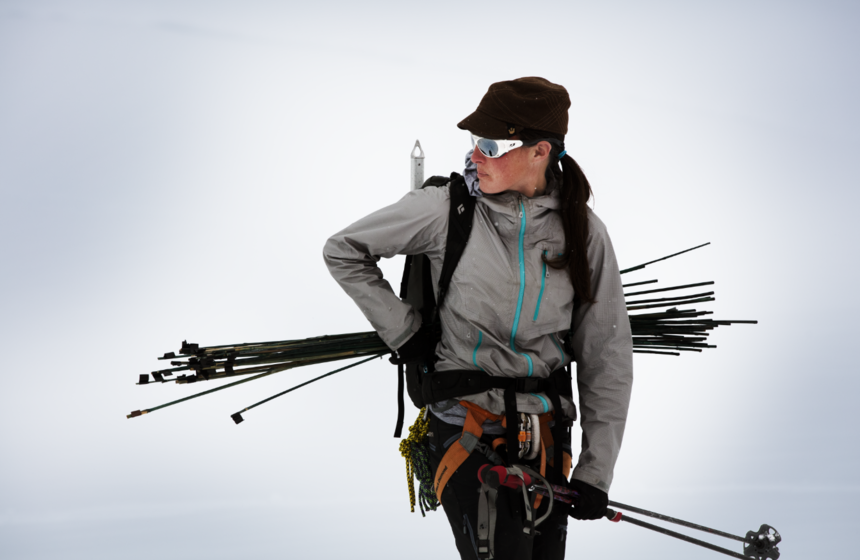 Leighan Falley was only ten years old when she decided that she was going to climb a mountain. “That one,” she told her mom in the car one day, pointing to Denali 200 miles off into the horizon. She didn’t even know its name at the time but the monstrous peak was calling to her.

Perhaps love for the mountains and propensity for the extreme comes natural living in the rugged, isolated wilderness of Alaska. But upon first glance, Leighan is not necessarily the type of woman you would expect to make a living out of sacking the highest peak in North America. She’s a petite 5’3" brunette with a small stature and a face ready to be in the running for Miss Alaska. But in Alaska, and especially while on expedition, the only true way to judge someone is by the weight in one’s pack and how one carries themselves in the mountains. 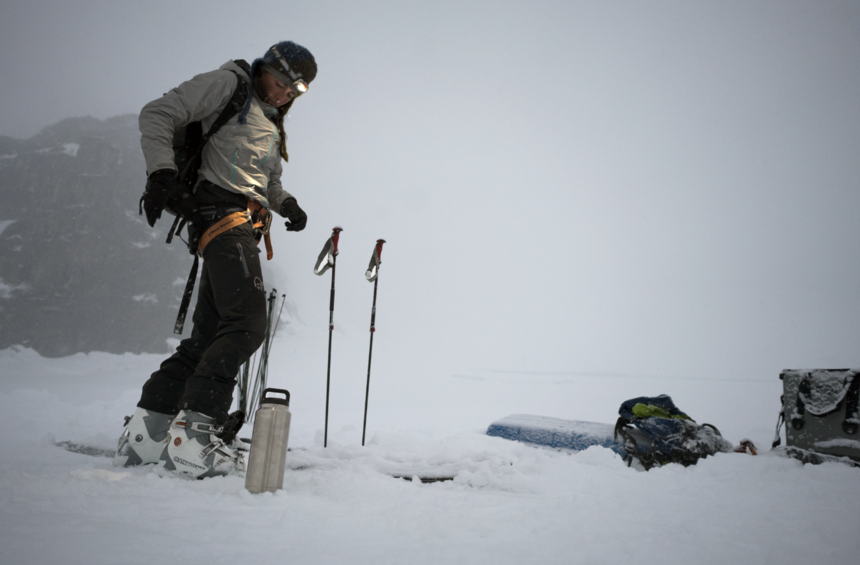 Leighan's first attempted to summit Denali shortly after graduating high school when her parents gifted her a National Outdoor Leadership School (NOLS) course up the infamous peak. As someone who claims to have been a highly uncoordinated kid, enrolling in NOLS’ most extreme expedition course at age 20 seems like an incredible feat. But even after summiting Denali six times, Leighan is the queen of modesty. “It doesn’t take a lot of coordination to climb Denali,” she told me lightheartedly. “Put one foot in front of the other and try not to fall in the crevice. You also have to breathe, a lot.” Plus, she was just a student. “I wasn’t making any decisions, I was just following!” 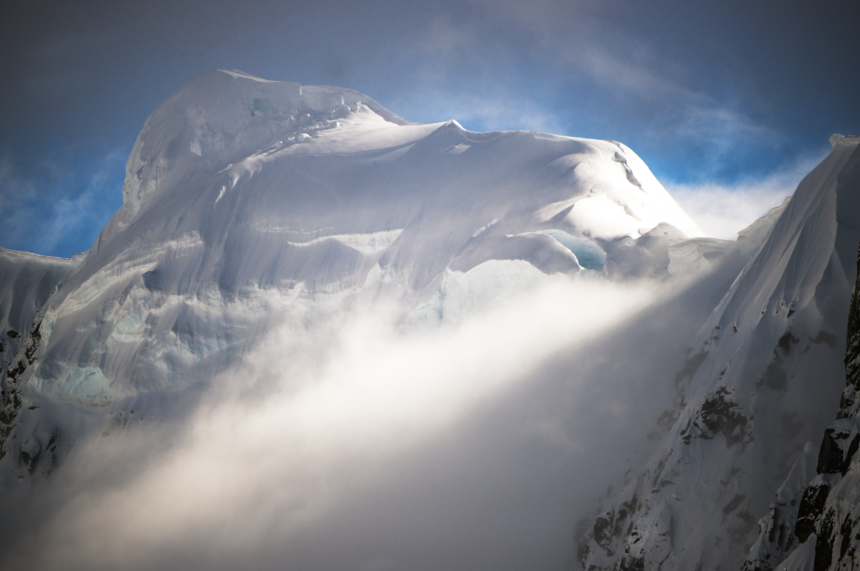 We can all agree that attempting Denali is no small thing. The mountain towers at above 20,000 feet and takes two to three weeks to summit—that's if you’re not stranded by unpredictable storms of ripping winds on its icy face.

What’s even more incredible is that after her first experience attempting Denali, Leighan still wanted to go back. Having grown up in the flat inland town of Fairbanks, Leighan had heard the legends of the White Winds of Denali, hellacious storms that could strand climbers on the face for days. Leighan never believed the stories until her NOLS expedition was stranded for five days and they shoveled around the clock to survive. While the storm was strong enough to rip her tent (with her in it, no less) straight into the wind, it was not enough to deter Leighan from returning to Denali.

“It was kinda nice to get that out of the way on the first trip, so then you know what the mountains are capable of,” she told me. “You kinda think to yourself, it can’t get much worse than this.” 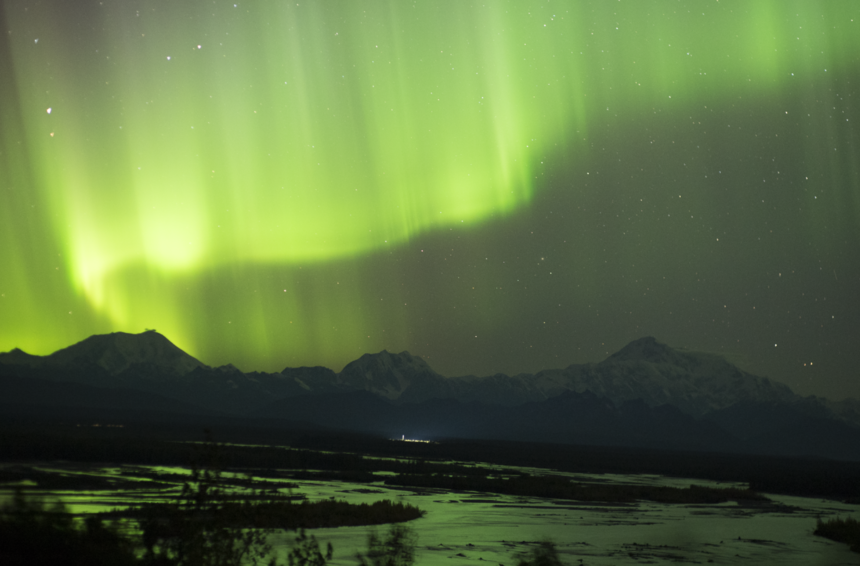 Following her fateful first Denali trip, Leighan went south to start school. She lived in various places throughout the Lower 48—Colorado, Utah, California, Washington—but nothing was ever quite like Alaska. Leighan would return to the Alaska Range to become an expedition guide on Denali for ten consecutive summers.

Despite Leighan’s nonchalance about the life in the mountains, she readily conceded that guiding Denali is most definitely hard work. “I think mountain guides are unpaid and overworked,” she told me. “Not only is it a lot of hard work, it’s very dangerous as well. I feel like it doesn’t receive the recognition it deserves.” 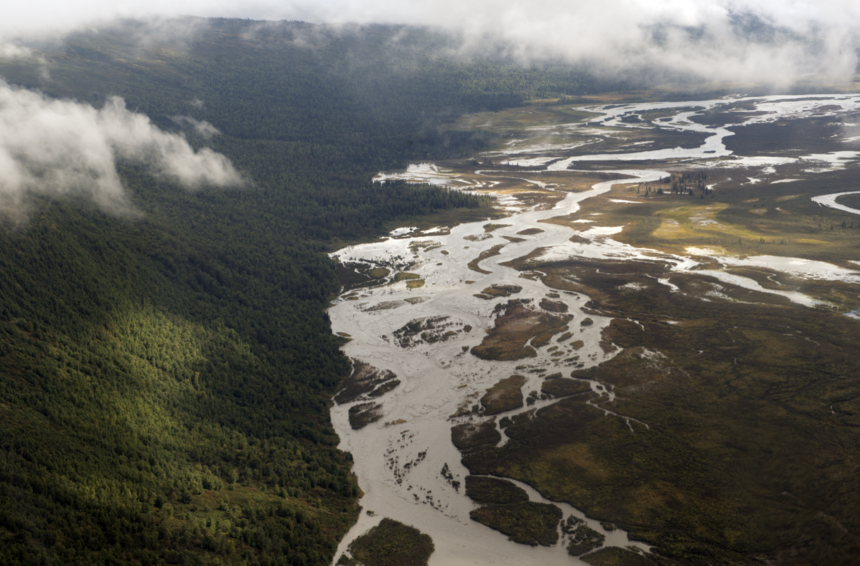 As a woman – and a small one at that – Leighan had a harder hill to climb to gain the respect on the mountain. The first expedition Leighan co-lead was with her good friend mountain mentor, Kristin Kremer.

“Kremer? Yeah, she’s amazing,” Leighan gushed about her friend, her admiration palpable even through the phone. “[The Yeti] movie should have been made about her.” Kristin taught Leighan how to be indomitable: “She never gets tired. She parties all night and skis or climbs all day.”

Initially, many clients were uncomfortable about the idea of being led by women. “But by day three, it becomes apparent that gender roles kinda slip away and people judge you on how much you’re carrying, your personality, and authority, and decision making.” Leighan told me how male clients would always come up to her and feel out the weight of their bags, shocked by its inevitable tremendous weight. “You can always carry more than they can.” 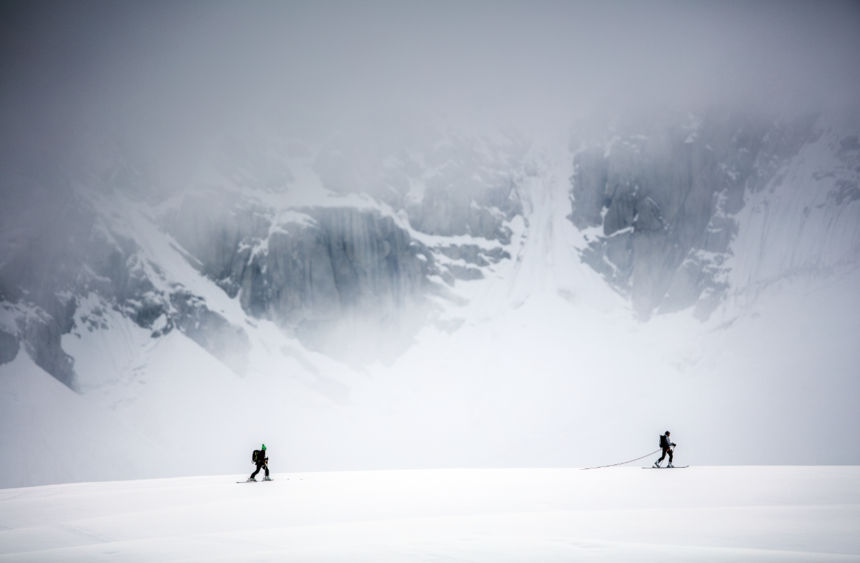 While her summers were spent leading expeditions in the Alaska Range, her winters were spent ski patrolling on the chairlift-ridden hills of Colorado and Utah. It was there, on a mountain in Colorado, where she  met her husband, Tucker Chenoweth.

Leighan met Tucker in probably one of the most legendary, mountain couple types of ways: Leighan, who had a reputation for her need for speed on the slopes, took a gnarly crash while ripping down the slopes at Eldora when a handsome young ski patroller came up to her and collected her stuff.

“I thought, ‘Wow, this guy’s going to come save me!’ but instead he pointed his finger at me and scolded me for going too fast.”

Tucker now works as a mountaineering ranger on Denali. The two have traveled as far as the mountains of Patagonia and Nepal to climb and share their love of the mountains. While many of their mountaineer friends are still embarking on this more or less nomadic lifestyle, Leighan and Tucker’s relationship reached new heights when they found out Leighan was pregnant with their daughter, Skye, five years ago. 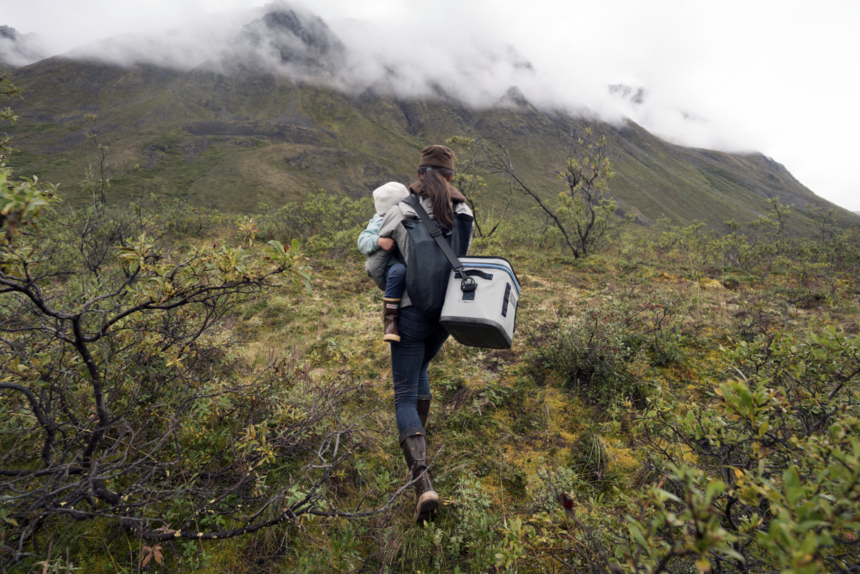 Just like crashing on a slope in Colorado, the best things in life aren’t always planned, even for Leighan who admitted she doesn’t like surprises. With the impending arrival of their new baby, Leighan knew it was time to find a more sustainable line of work, a job that would let her come home to her family every night, without having to give up her lifeline to the Alaska Range.

Without telling anyone, Leighan raced to get her commercial pilot’s license to fly Air Taxi’s out of Talkeetna. Her father, Tom Falley, who is also a mountain guide turned pilot, did not even know she was going through training until he heard her on the radio.

Follow Leighan on the Alaskan adventures that enrich her life and legacy in Denali’s Raven, a new short film from Yeti (above).

That type of independence and tenacity may just be born into Alaskan women like Leighan. “It’s easy being a woman in Alaska,” she says. The Yeti piece beautifully illustrates the close knit relationship between Leighan and her co-guide, Kremer. That same sense of sisterhood is shared by the women pilots she works with now. These are women who can fly anything and fix anything, and have confidence that she can too.

“I’m really just standing on the shoulders of the great women who came before me,” she said, reminiscing fondly over her female co-workers who would teach her around airplane mechanics by helping her repair something, pulling it apart after and having her do it herself all over again. 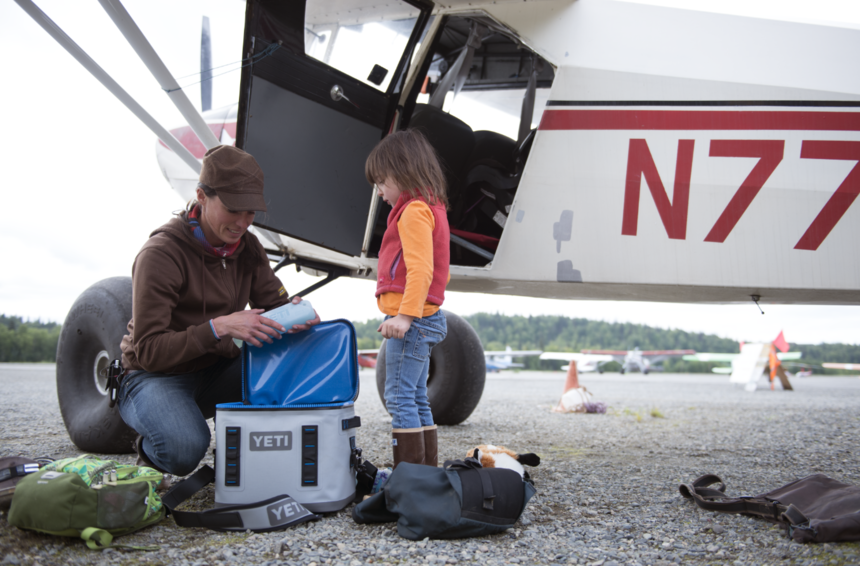 The pace of life has dramatically changed for Leighan in the past five years. Though making a career change, her love for the mountains has remained unwavered, and her risk management assessment has just been shifted from one profession to another. The best part about her new job? She still gets to go into the Alaska Range every day.

Being this close to the mountains also fuels another side of Leighan that you won’t see from the inside of a cockpit or under a heavy pack: she is a crazy talented artist. Leighan takes her sketchbooks on expeditions and returns home to create large, beautiful acrylic paintings, some of which will be shown in the Telluride Mountain Film Festival later this summer.

“The Alaska Range is just a huge, sublime, dramatic mountain range and it provides more than enough inspiration for all kind of artists including me,” she said. 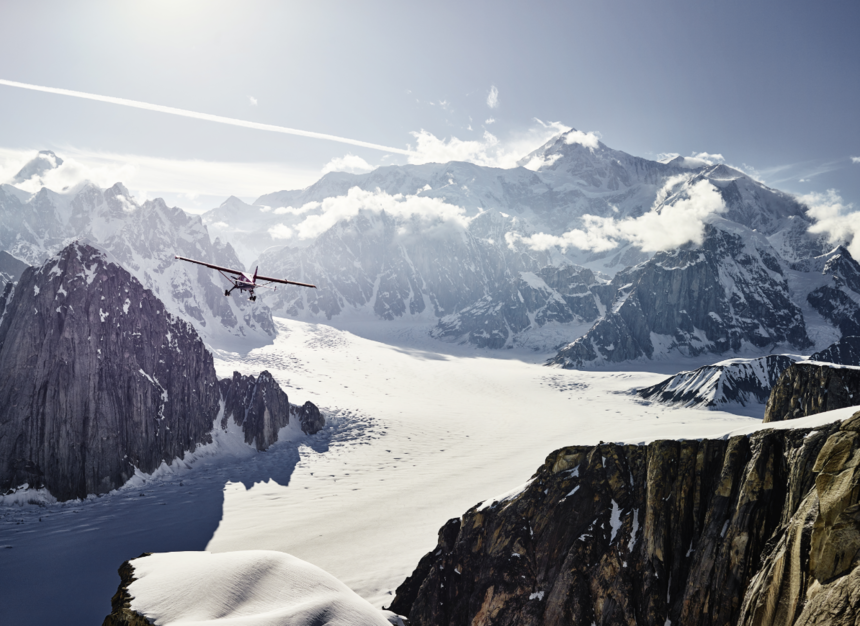 Another one of those artists is her father, Tom. This spring, they teamed up for a joint father-daughter exhibition showcasing her paintings and his photography, both of which are inspired by the great Alaskan landscape around them. From mountaineering, to piloting, to artistry, the large expanses of the Alaska Range have brought Leighan closer to her family.

In a few weeks, Leighan will be heading to the coast in Kodiak to dig up clams and let Skye get muddy.

Traveling the expansive Alaskan wilderness is made possibly by her personal bush plane.“It’s really remote. We use airplanes like cars over here.”

But that’s the way Leighan likes it: “Alaska is a big, huge, beautiful, wild place with lots of untouched mountains and backcountry and I like it that way,” Leighan told me, the sounds of aircrafts buzzing in the backcountry. “I tried to live in the Lower 48, but there were too many people, roads behind every mountain range. I like the idea that the roads end here.”

Thanks for the given this great article for me it is the nice way to app here set clock windows 10 many web users go online and follow the tips for batter have the all update.