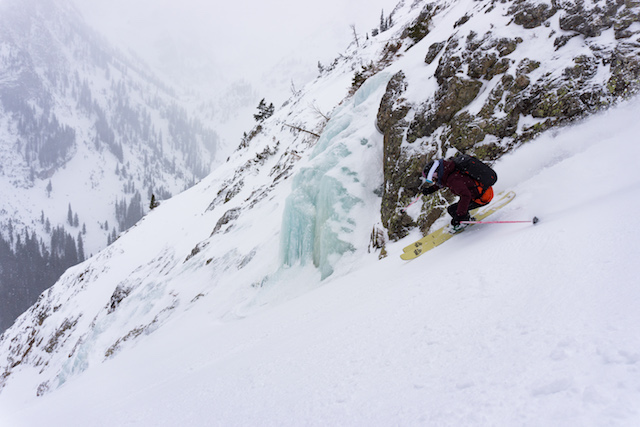 When faced with the chance to ski with skiers like Lusti and Havell, it would be foolish not to ask questions. Monica Purington photo.

I sat at my desk on an nondescript Wednesday morning with an opportunity to learn from two poised women in the ski industry I greatly admired later that week–Christina “Lusti” Lustenberger and Kim Havell–and was on the brink of bailing out of intimidation. Having spent the last seven years trying to soak up as much knowledge as I possibly could about backcountry skiing and ski mountaineering I somehow still felt inadequate to spend a day in the Tetons with skiers I admired dearly. Was I good enough? Would I make myself look like a fool trying to follow them? My ego didn’t want to be bruised.

While the demons played tag in my head, I grasped onto the growth that I always find within discomfort and said fuck it: Of course I wanted to spend my Friday skiing in the Tetons.

I was being given the opportunity to explore and navigate the minds of two of the mountain guides I admired most, and my mind was racing with questions. Did they ever feel self-doubt in the mountains because of their gender? Did the mountains give them the same yearning for stronger, more knowledgeable and less emotional decision-making they instilled in me?

Arriving at the Alpine House in downtown Jackson, Wyoming that Friday, the buzz was alive. People from across the United States, Canada and as far as Japan were joined together all for the sake of expanding backcountry knowledge at the first-ever Arc’teryx Backcountry Skiing Academy–and maybe a powder turn or two.

With the sun having yet risen everyone was divided into their clinic for the day. I would be joining Lusti and Havell for intermediate mountaineering along with one additional client, Margie. 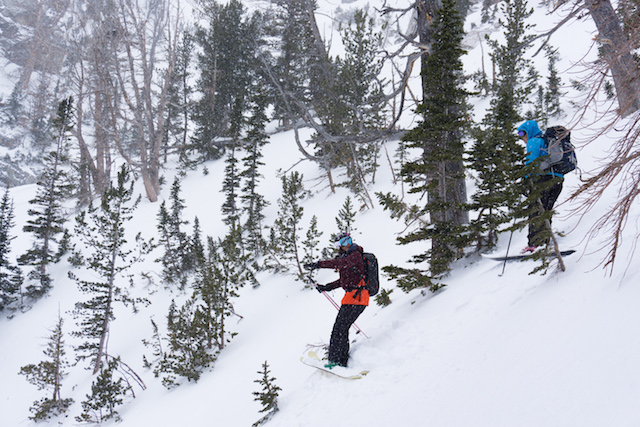 When a former World Cup skier tells you something, you listen. Monica Purington photo.

Havell, our local guide for the day, has lived in the Tetons for the last seven years and has been guiding for over eight years. She has skied on all seven continents and has quite the impressive resume. On paper her accomplishments could easily seem intimidating. In person, she was anything but: As a new mother, you could feel her exuding a gentle demeanor.

Lusti, an Arc’teryx athlete and ACMG guide, would lead our group. With a history that included several years on the Canadian Ski Team and an Olympic appearance in 2006, Lusti’s CV was equally as intimidating.

Havell, Lusti and I piled ourselves into Havell’s red pickup truck, leaving no room for awkward silences. There was too much to talk about; the days objective, how we each got into skiing, mutual friends and even the best tricks for keeping harsh winter days from showing up on our aging skin.

An objective for the day had been set and we determined to check-in multiple times along the ascent to discuss snow conditions, approaching our line and any red flags we saw along the way. But beyond simple condition checks, our skintrack discussion more closely resembled the banter between a trio of ages-old friends. 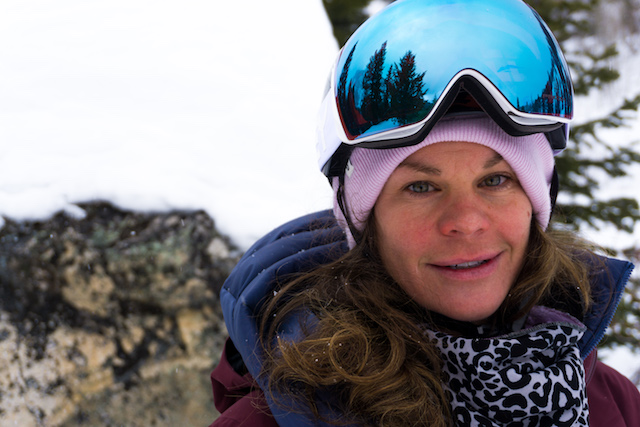 With Lusti close behind me she shared her early desire for getting into mountain guiding. “After my fifth knee surgery while ski racing,” she began, “I wanted to keep skiing but do something more sustainable–move into something that was more like a job.”

Unlike many females in what we call, “big mountain skiing,” Christina didn’t have to prove herself. As a World Cup and Olympic ski racer she had already done so.

“I did have to learn about the mountains though,” Christina commented. “And I was determined that if I could be the strongest and most knowledgeable person I possibly could be than I would gain respect as a guide whether I was a female or a male. I am no different than them.”

About halfway to the top of our line we stopped, assessed the warming temps and cool winds keeping the snow cold. Snow assessment finished, the group moved on to bragging about who had the best snacks. A few minutes and 500 calories later we started walking again.

Throughout the day I was presented a plethora of opportunities to pipe up and ask questions my ego normally wouldn’t allow for out of the fear of sounding ignorant. But today I vowed to myself that I would be as vulnerable as possible.

There was something about Havell that made my questions feel welcome and appropriate. Perhaps they just were appropriate questions, but they way she received them was like a compliment for even having asked a question. I took a moment to thank her that fact as she set pace.

“You will find that as you get older there is no space for ego in your life anymore,” she responded with backing from Margie. “At 50 years old I don’t have time for any ego.”

Arriving at the top of the line we continued to discuss conditions, consequences and considerations for what we were about to ski. Margie and I asked questions and were guided through ways to assess our choices. Once we thoroughly discussed our plan of attack we took off leapfrogging our way down the couloir. 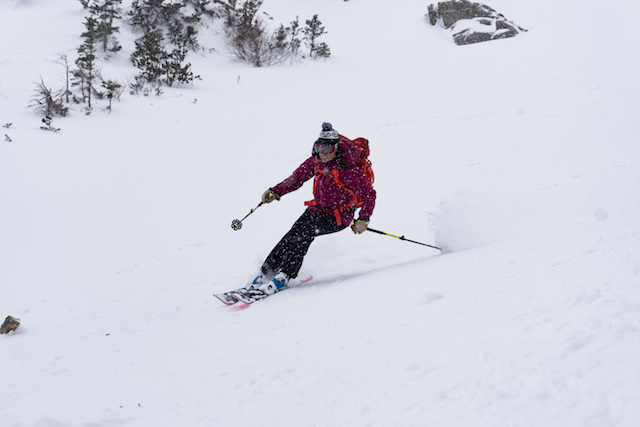 Havell couldn't be less intimidating in person. On the mountain, she was all smiles. Monica Purington photo.

The line skied beautifully with almost no surprises. Once at the bottom we all praised each other for the wonderful day in the mountains. The best part was we still had an adventure remaining to get back to the car.

As we all felt fatigue–or at least I did–the out was a bit more quiet than the ascent. In those moments, I thought about how different the day had been if I was skiing with a group of guys, questions stifled by my own ego an a fear or seeming inexperienced, ultimately going home without any new knowledge and without having made decisions for myself. Ultimately, the experience of skiing with Havell and Lusti opened my eyes to how it doesn’t have to be different, regardless of companion. After all, I am no different than them.

Thank you for the tips. My last time there made me a little stressed. I brought the team from mold removal milwaukee with me, and I was pretty fun. I will be doing much better on my next skiing trip.

Good luck with that. It does seem like a lot of fun.

This sounds like a wonderful experience! Glad you got this opportunity to ski at Jackson Hole, I was recently there with my team from Piano Humidity Control Spokane for our annual employee retreat. It was an absolute blast! We’ve got plenty of great skiing here in eastern Washington, but Wyoming offered something really unique and I am planning to go back in the next couple years.

I was just chatting the other day with my best mate working as an electrician in bendigo and he said he has been to many mountains to ski and snowboard and it he mentioned how much of a rush it is but how you need to respect the mountain side because you never know what is going to happen next. I thought that was interesting. Reading articles like this make me think much deeper about it as well. Thanks for sharing.

You have an excellent gift in story telling - you made it feel as if I was right there in the mountains with you guys! Very enjoyable read, well done.
Braden | pool cleaning Antioch CA