Elyse says her dad's "a hardworking ski bum," and that's what she got from him. While she ended up the pro skier, he's got the pro-level 'stache. Elyse Saugstad photo.

At 6:30AM the day Elyse Saugstad and I tentatively planned to chat about how she went from Mighty Mite to one of the best female downhill racers in the country at the age of 16, and ultimately a professional skier, she emailed, “I'm heading out for a surf right now but can talk after!” I was in bed, regretting this new green food I’d fed my dog the previous night. Elyse was surfing, I was mopping up something not even the most savage of savages should be subjected to, and my years-long wish to just be Elyse was stronger than ever.

Having watched Elyse ski, by which I mean fearlessly rip with hard-to-come-by ease and agility, I assume she’s equally as masterly on a surfboard. Apparently, I’m wrong. But the thing about Elyse is she actually likes being a beginner—she’s drawn to the challenge of learning new skills, and she thrives off the adrenaline inherent in testing your limits. Now, she gets that fix from surfing—“I’m getting tossed around and held down when the swells are big, but I’m still like, ‘hell yeah,’” she says—but when she was a kid, she got it from skiing. 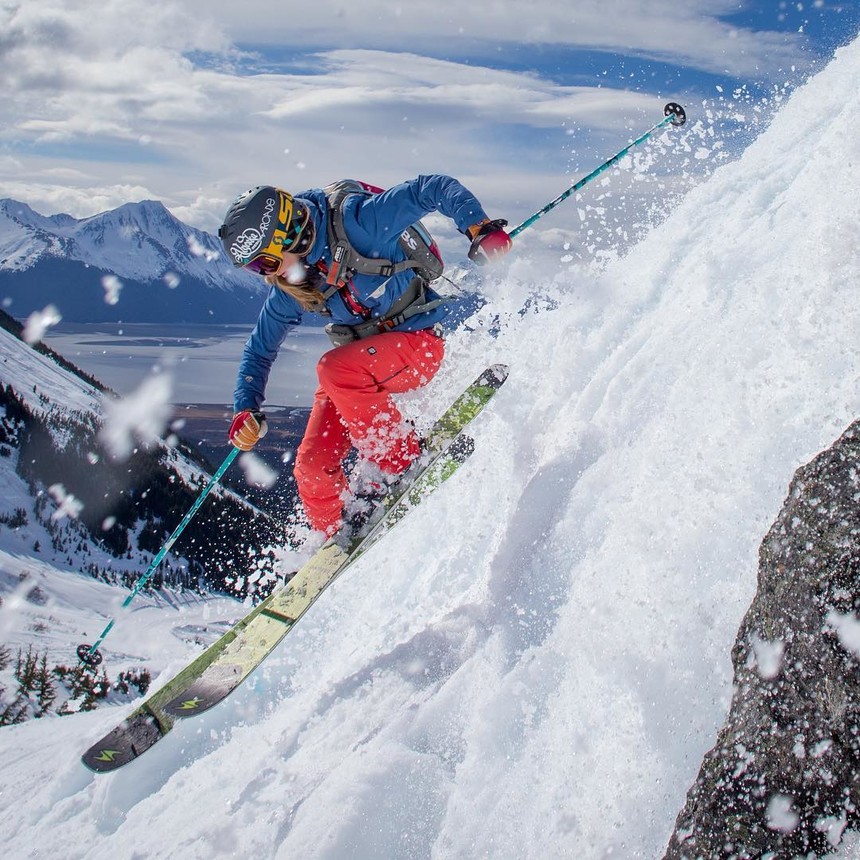 Elyse charges everything and anything thanks to the mindset, “Don’t ever turn your back on fear, embrace it as your friend.” Elyse Saugstad photo.

Elyse was born and raised in Alaska, the breeding ground of many of the most decorated, respected, accomplished, sick, baller, badass skiers, like Tommy Moe, the downhill-skiing Olympian. In turn, it’s fitting Elyse started ripping shortly after she stopped wearing diapers. She says, “One of my earliest memories is when my parents pulled me out of kindergarten because it was a pow day.” She remembers thinking that was the coolest day ever—she was hooked.

Fast forward a year or two and Elyse joined Alyeska’s Mighty Mite program. Alyeska’s “steep and deep,” which means it’s hard not to learn how to charge right off the bat. Elyse says, “Most of Alyeska’s U.S. Ski Team racers were downhillers because the resort itself really sets you up to be that sort of skier.” But Elyse’s quick climb up the ranks happened not just because of the terrain she had no choice but to tackle, but because she’s a natural. She was born to ski. 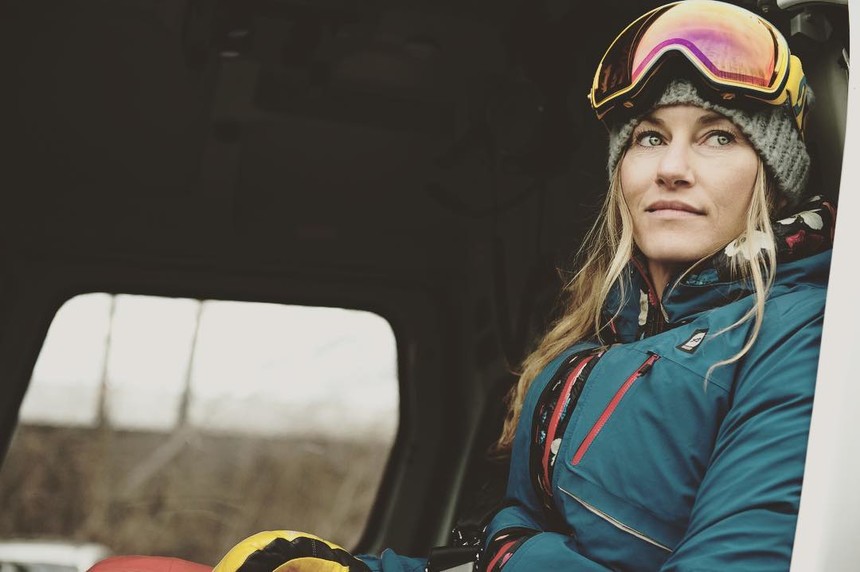 Elyse set out to become a lawyer. A couple realizations later, her main law became to ski. Elyse Saugstad photo.

I keep probing Elyse about the steps she took to get to where people are actually paying her to ski. I want to know the secret sauce, but there is none; her skills required years of a lot of blood, sweat and tears. Elyse attributes a large part of her success to her competitive nature. No, she wasn’t putting the wrong type of wax on her opponents’ skis; she was simply always pushing herself, and she walked to the beat of her own drum.

Elyse recounts how she and her Mighty Mite friend of similar ability would break off from the group to ski their own lines. Elyse’s parents wondered why she never got rewarded for perfect attendance at the end of the season ceremony, but what they weren’t aware of was that scrawny little Elyse (she used “scrawny” to describe herself) would often just set out on her own mission. Sometimes, she was just over skiing in a line following her coach. She wanted to choose her own method of attack. 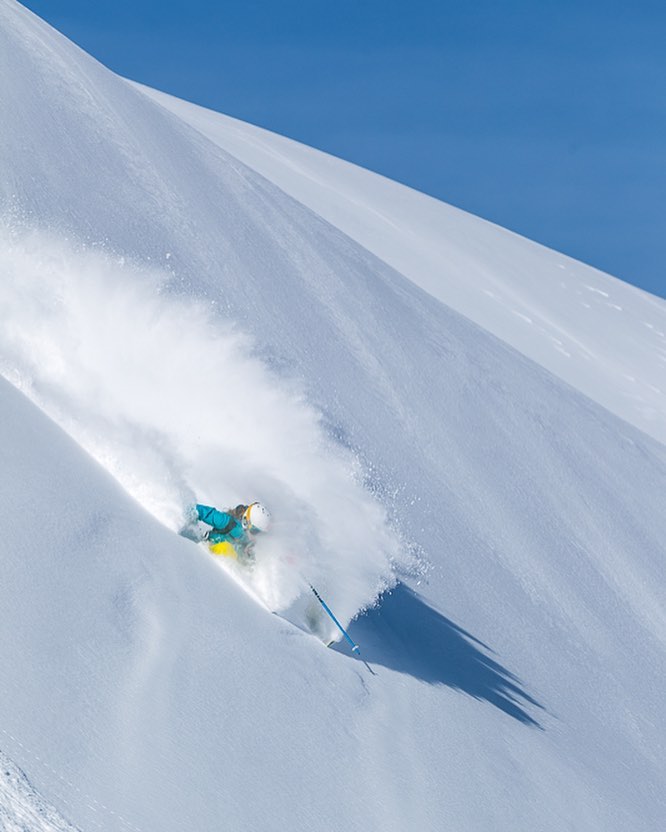 Ever since that one day in kindergarten when her parents pulled her out of school to ski pow, Elyse has had powder on the mind. Elyse Saugstad photo.

Elyse says her parents’ jobs prevented them from attending all her races, making it super special when they did. She regretfully recalls: “One time, they came to watch me race when I was about 16 years old, but I missed the start because I was busy skiing pow. That was a big whoops! I loved racing, but I also loved pow, being in the mountains, and being outside with friends,” she says. Elyse was dedicated, but she was dedicated to the whole package.

Warren Miller movies inspired Elyse to go bigger when she was a little girl, but not necessarily pro, and while she attended the University of New Mexico for their ski team, she was pretty set on becoming a lawyer. Elyse immediately dropped out of UNM’s ski program, choosing to focus on academics. She feared skier burn-out, and knew she’d return to it when she took time off post-graduation. 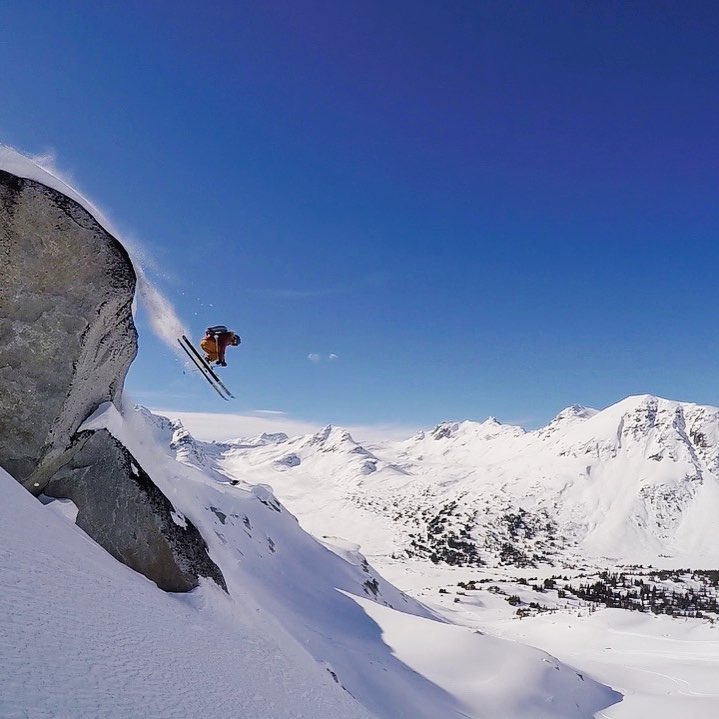 Elyse hits the backcountry with husband-and-pro-skier Cody Townsend. If there's one hashtag for that, it's #RelationshipGoals. Elyse Saugstad photo.

Fresh out of school, Elyse’s plan was to be a ski bum and study for the LSATs. But the freeride opportunities started picking up for Elyse, and she couldn’t say no; she was happiest on the hill, after all. She says, “As a preteen, I remember watching Greg Stump’s ski film Groove, but the only female that was in the movie was also go-go dancing at the end of the movie.” Elyse says, “I thought that was BS, like you have to dance in a bikini to make the movie?” At that age, she knew she wanted to be featured in a ski film, but not as a go-go dancer. She wanted to be sending it off cliffs.

Elyse attributes a lot of her talent to ski racing as a child. She says, “Racing gives you such a strong foundation of basic ski skills. It builds confidence, which lets you charge harder, and it encourages you to find a quicker line. It’s a huge mental game.” She continues, “Kids might think racing’s dorky, but when Cody [Townsend] and I have kids, they’re definitely going in the race program before the freeride program; you need the basic foundations.” Elyse uses Michelle Parker as her example: “Michelle quit racing when she was in her early-teens, but she ski-raced long enough that she has a really strong, solid style that allows her to charge big mountains.” 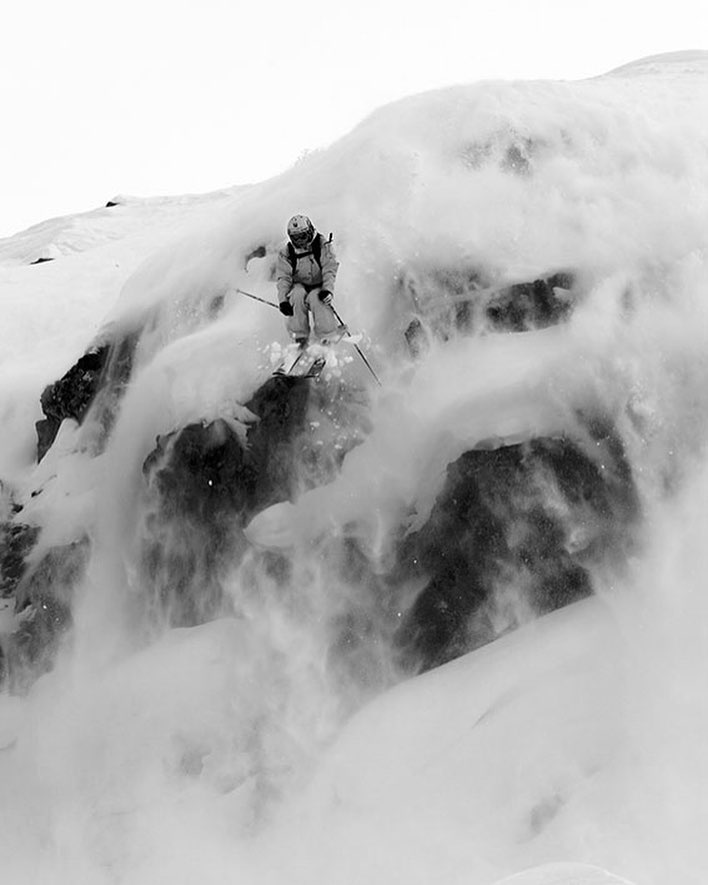 For Elyse, there's no black and white to skiing: it's all about trying. Elyse Saugstad photo.

I ask Elyse for some ski pointers she lives by. It’s all part of trying to get one step closer to being her. She says: “When you're going to ski something you’re pushing your boundaries on no matter what your level is, you’ve got to focus on the positives. Don’t let negatives seep into your mind—they can take over. Just pick out a couple things you think you’ll need to do to nail your line, and go for it. You can’t think about all the what-ifs. Focus on the positives, not the negatives.”

As for cliff jumping, she says, “99% of the time, speed is your friend, and if you’re gonna do it, do it. Be dedicated.” She continues, “It’s basic physics of the arc versus plop. Skiing it fast doesn’t allow you to second guess what you’re doing. You don’t want to let hesitation slip in—that’s what causes the plop.” 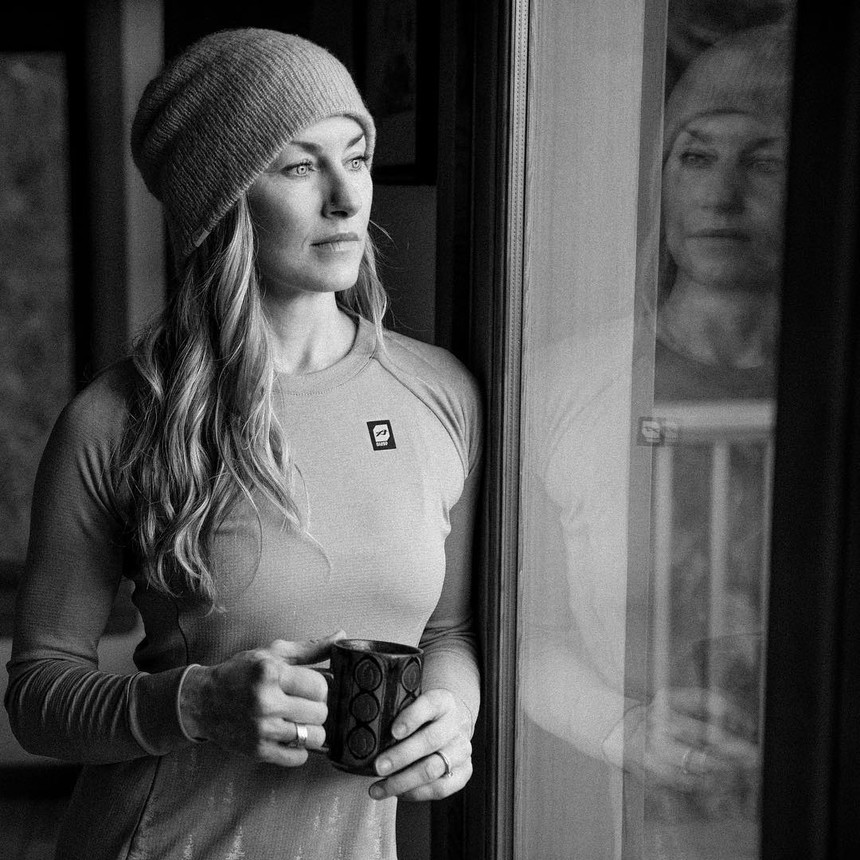 While the mountains are Elyse's playground, she doesn't approach them naively. She knows they're merciless. She respects their power, but at the same time challenges their might. Elyse Saugstad Photo.

For Elyse’s final tidbit, she says, “Whenever you’re going to drop in on something that makes you nervous—whether it’s a ski race or spine or big open bowl—it’s natural you’re going to feel scared, but you just have to take the plunge and try.” She reassures, “Once you get in the habit, it becomes easier and easier—it’s just the initial jumping in that’s hard, but do it because that’s the most fear you’re going to have…after that you can take it step by step and see how much you’ve accomplished, and it’s really fun!”

All of this Elyse is applying to surfing. She’s no preacher. She walks the walk. She calls the mountains “sleepy giants” because they can come alive at any moment and take a life, but says she’s infatuated with the ocean because it’s always alive. With age, she’s become cognizant of consequences, and thus has more fear to contend with while working on her surfing skills, but she’s doing it. She says, “Don’t ever turn your back on fear, embrace it as your friend.”