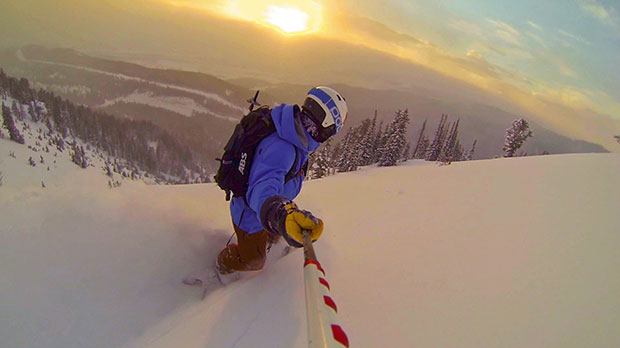 Don Watkins finding peace and tranquility on his Franco Snowshape in a dawn patrol lap on Teton Pass.

A photographer and his lens, a fisherman and his net, a painter and his brush, a snow surfer and his shape… The powerful connections we make with these simple objects of mass bond us closer to the source of our inner being, that place where we excel, grow and create in our element. But when do these objects or “tools” transform into something more and become art? A type of art which engulfs the spirit of the rider and the mountain and allows us to tap into that primal instinct that many like to call the ‘wu wei’?

Enter Mikey Franco: friend, teacher, guide, snowboard shaper, artist, traveler, student of the mountains and a source of light in the Jackson Hole valley for the past thirty plus years. Whether you run into him at the Whole Grocer, on the tram or at the Igneous factory where he shapes, Franco’s stoke is extremely contagious. Franco is a strong believer in manifesting shapes that will make this connection between the rider, his board and the environment a reality under the  Franco Snowshapes label.

“Both the riding and the board are an art form. Through time with surfing, I have discovered that the two are subversive.” 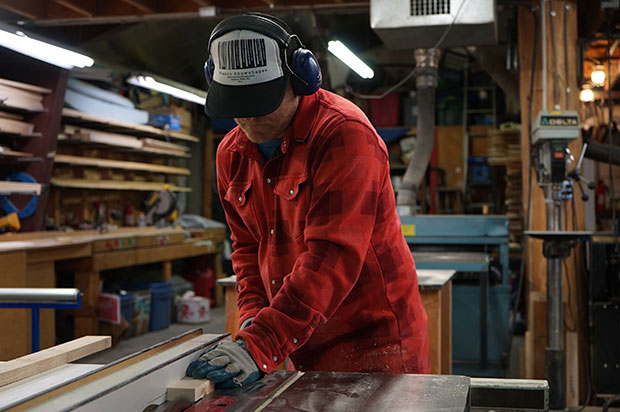 Mikey Franco in his element at the  Igneous factory in Jackson Hole, where Franco Snowshapes are put together.

Franco is looking to manifest something much more then a tool; he is looking to shape boards that will facilitate fun, by better connecting ourselves with the natural impulse to slide sideways, carrying the rider forward to their true expression of self in every turn. “I try to utilize my experience with teaching over the years and ask, 'How is someone going to react when they stand on this thing?'” And that is why Franco is so on point at shaping boards for people. He has been riding, watching, listening, teaching and learning from students and the mountains for decades. What better perspective could a snowboard shaper have?

Throughout most of his career, Franco rode for Burton Snowboards. “I loved riding for Burton. They treated me like gold, but I was tired of begging for boards; I needed more.” It was on a snowboard trip to Japan (Franco will be making his ninth voyage to Japan this winter) where he was turned on to a different side of snowboarding. “When I saw Taro Tamai’s (the creator of  Gentemstick) stuff and felt the vibe in that shop, I thought, 'This is me.' It’s a life that doesn’t just end after I get off the slopes. It continues.” 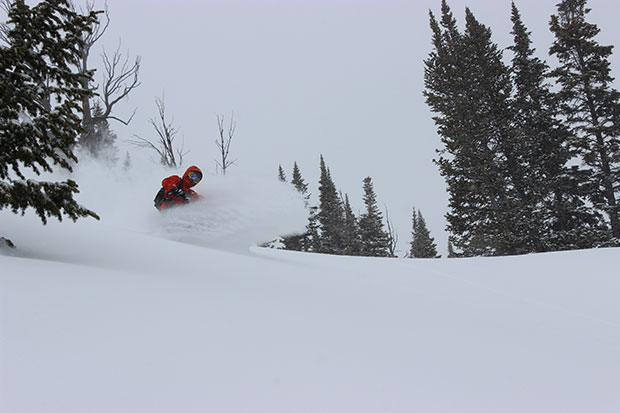 Upon Franco’s return, he started to connect the dots and follow the path to continue what started in Japan. “I wanted to dive into shaping and design and the second influence came with Mike Paris and Mott Gatehouse (of Igneous Skis and Snowboards). I thought, 'Wow, these guys are doing it. Let’s put it all together. I can do this and make a board for everyone that nobody is really pushing.'” 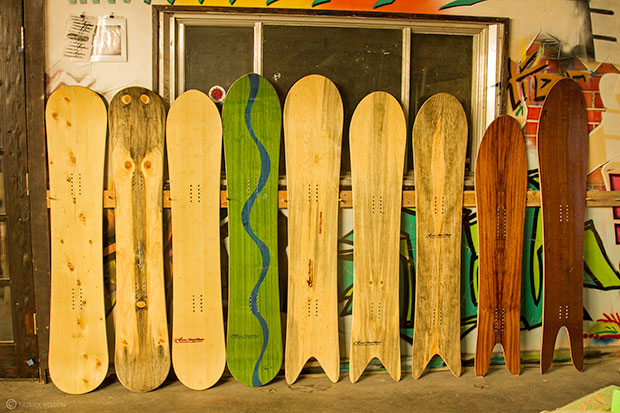 Franco’s quiver is always stacked! Stop by the factory and jump on one. Photographer: Patrick Nelson

So together with the help of his best friends at Igneous, Franco has been dialing in the art of crafting custom made, all-wood snowshapes, day in and day out, since 2010. Interested in how it all works? Take a look at this sweet short depicting Don Watkins and Mikey Franco building a custom swallowtail snowshape:

But Franco didn’t want to head out in the Igneous direction. “They never made a board that was really my style. I’m about pow, smooth slashes, fluidity and finesse, not agro go-hard style. The Jackson thing–bigger and stiffer–I’m not that kind of rider. I’m not about riding with angst and aggression.”

I’m about pow, smooth slashes, fluidity and finesse, not agro go-hard style. The Jackson thing–bigger and stiffer–I’m not that kind of rider. I’m not about riding with angst and aggression.

And this is where Franco Snowshapes began, taking the amazing construction, materials, methods and tools of Igneous Skis and tweaking the finished product to a more user-friendly shape where he could make the board he believed in. “How do I take what Mike and Mott have taught me and reform it a little differently so I can adopt that to some of the general public who doesn’t ride one hundred days a year? It’s different than Igneous; just a little more earthy, not as exclusive.” 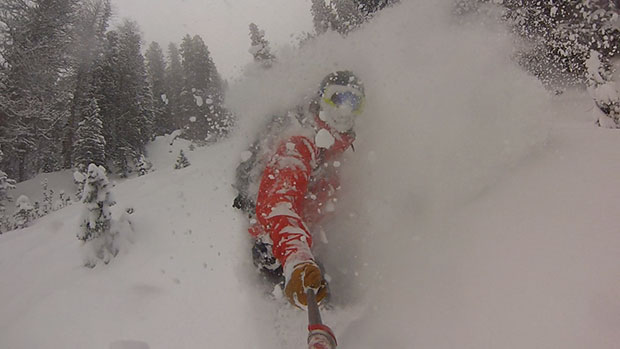 Finding the fullness of the void during the all-time cycle that was last February in the Tetons.

“I’m just as stoked to be in here [in the factory] than I am to be getting off the tram. I can’t explain it,” Franco said. The passion for shaping and working with wood has completely engulfed him. This summer, in collaboration with Jackson Hole Mountain Resort, Franco selectively harvested two standing dead White Bark Pines. “White bark takes a very long time to grow because of where it’s at (cold, windy, exposed high elevations), and typically it is very twisted. We were able to find two that were pretty straight with not too many cracks in them.”

Franco’s new White Bark line will consist of 20 to 25 boards with the exact longitude and latitude of the tree's former location printed on the topsheet. “It’s a really pretty tree that has a tragic story and is important to this area. The ski area was stoked to put this wood to good use, and I wanted to document where this tree’s life ended, and where it started over again.” For a better understanding of the harvesting process of the white bark pine, have a peak of Don Watkins short documentary:

Along with his custom, all-wood boards, Franco hopes to expand to a new audience by offering his tried and true shapes in nylon and polyester. This line would greatly expand Franco’s potential market by reducing the final sticker price on Franco Snowshapes. “I want to separate the two lines, with a better price point on the Nylyon and polyester (P-Tex) sidewalls line and then staying true to the wooden signature line as well. Similar feel and same shapes.” 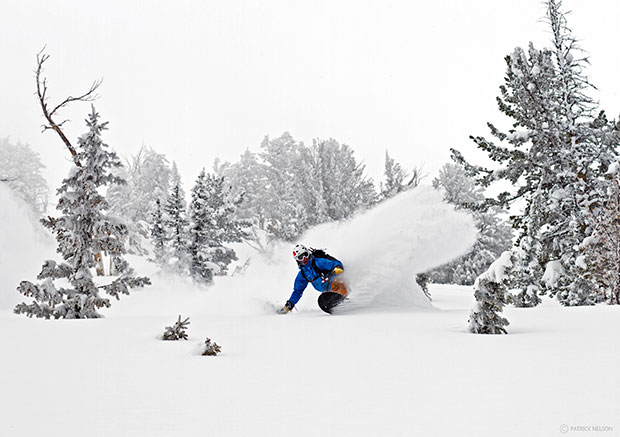 When discussing the past, present and future of snowboarding, nobody is more positive then Franco. “The aging of snowboarding,” as he likes to call it, “has come full circle as it constantly evolves, and at this moment, the swallow tail revolution is in full play.” The snowsurfing path that Franco speaks of is alive and well in every one of us. Whether you rip big lines in Alaska or small hills in the Midwest, it is about sharing high fives, smiles and turns. 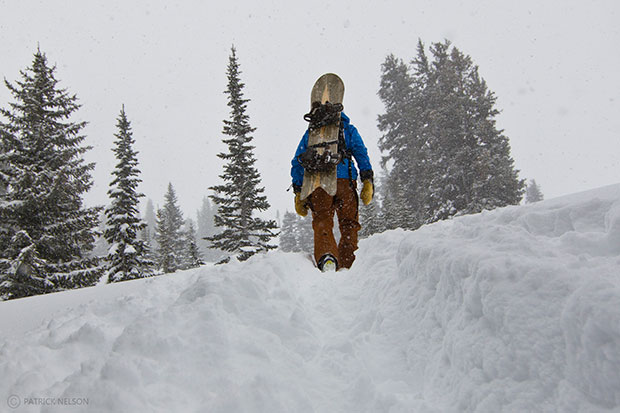 In the end, it is all about getting more people on Franco Snowshapes and stoked on snow. Demand has grown naturally as more riders begin to understand the power and characteristics of wood underfoot, and Franco is prepared. “Being able to appeal to more people is important; otherwise it’s just a hobby, and I would like this to turn this into a business. It’s fun working with wood.”

View All
Sign in to comment
tags: Jackson, WY, United States | upstarts and underdogs |timber |they only live to get radical |the tao of wood |the fullness of the void |teton residue |swiftsilentdeep |stoke is contagious |spread the stoke |soul |snowsurf |pursuit of powder |powder |outerwear farts |mikey franco |jackson hole |hug a patroller |good wood |franco snowshapes |fear and loathing in wyoming |cowboy powder |because it's there |always ascending Sick read dude, nice work. I need to get myself one of Mikey’s boards. Highly suggest stopping by the factory and demo a few shapes.

Big ups to Franco and the Igneous gang!

La Paloma Theater was the place to be in Encinitas, CA on Wednesday night. Taylor Fry photo. Mountain Revelations, TGR’s latest snowboard film featuring Ryan Hudson, Rafael Pease and Jeremy Jones premiered at La Paloma Theatre in Encinitas, California on Wednesday night before embarking on a nationwide tour. The film tells the story of the three professional snowboarders on a 10-day foot-powered mission into Alaska’s Chugach Range, where they explore epic lines and reflect on their

Third place winner Molly Armanino with a huge huck into the chunder! Kings and Queens of Corbets 2022 was one to remember! | Max Ritter photo. And that's a wrap! After an epic week of skiing and snowboarding around Jackson Hole Mountain Resort, the group of athletes that gathered here for Kings and Queens of Corbet's 2022 finally got to show what they were made of on Thursday morning. After six weeks of high pressure left the Tetons with some very challenging snow conditions, nobody was