Fabian Lentsch likes nothing more than to explore the far reaches of the world on his skis. His travels have taken him from Iran to China to Alaska, but he learned a valuable lesson this season. When it snows more than it ever has at home, you stay at home. Capitalizing on the deepest winter he’s ever seen in the mountains of Austria, Fabi shared his custom-built expedition van with friends Griffin Post and Sam Smoothy to show them around the best lines and mountain top Schnitzel dens. The snow never stopped, allowing them unparalleled access to a type of skiing few have ever done. 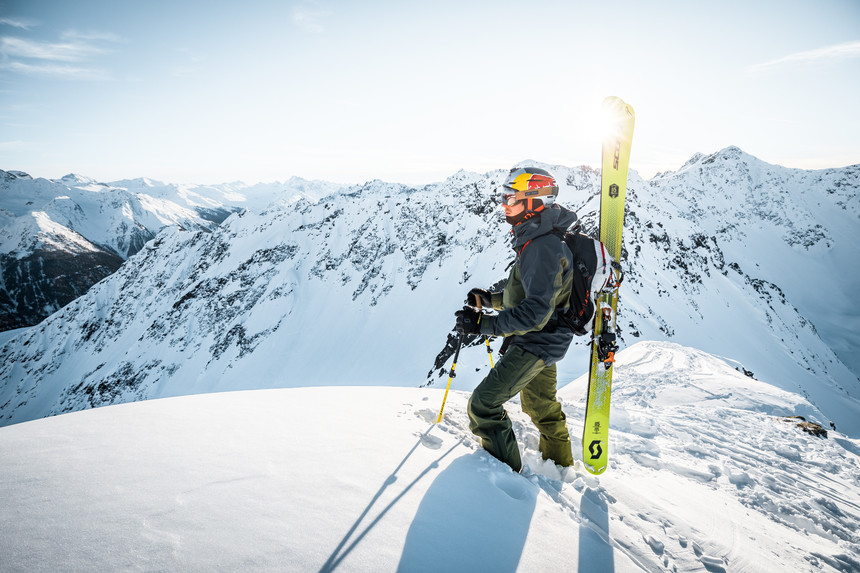 Fabian Lentsch takes it all on a perfect day in Austria. Mathäus Gartner photo.

TGR: It seems like this season was one for the history books. Give us a little look into how it all unfolded!

Fabian: Well, January this past winter in Austria was absolutely crazy. It started snowing like mad right after the New Year, so I was pretty excited that the boys were coming to ski. Smoothy, Griffin and I made a plan to base in my van and chase snow throughout the Alps. The boys came with high expectations, but then a southern wind came and ruined the snow pack for a few days. It’s hard to find good stable snow to ski in January. Luckily, it kept snowing and the pack quickly got stable, so we got in the van and started checking off big mountain lines.

TGR: Austria is a complicated place, where did you go?

Fabian: I know the mountains around Innsbruck well from growing up and living here for most of my life. That gives me an advantage in choosing zones to hit depending on the snow. We saw so much snow this year that lines came into shape that I didn’t even know existed, which was really cool. It was mostly south-facing lines that looked like big Alaskan faces that you ski in the spring, except we were in Austria, in January. We skied around Kitzbühel, Kappl, in the Karwendel, and in some secret Fabi zones! We stayed mostly near the resorts and took lifts to get close to big lines, which is typical in Austria. It was nice to have the van to park in the valley and walk up to huts to spend the nice. We went from truck life to hut life and basically just lived in the resort! 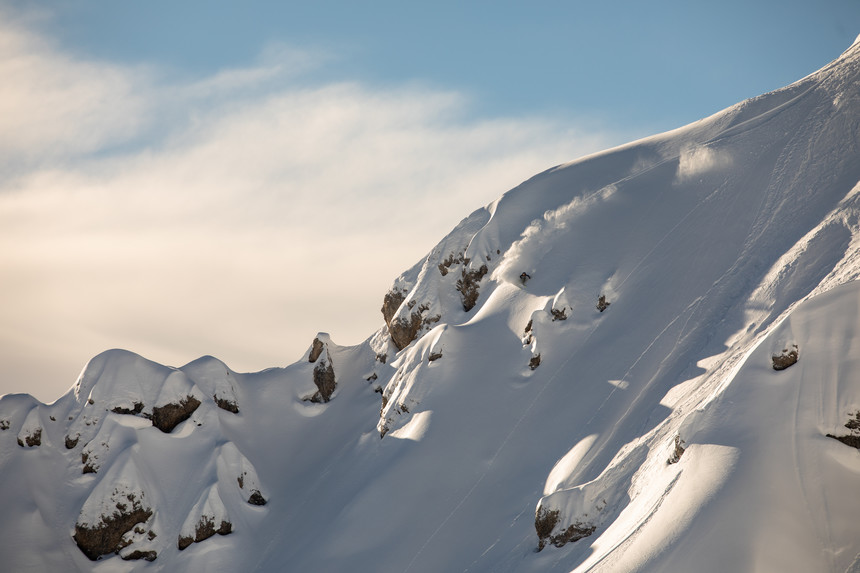 Fabian charging a line right in his own backyard. Chris Bezamat photo.

TGR: Tell us a little more about this van setup.

Fabian: It’s a huge truck with eight beds, a wood stove, a full kitchen, and lots of ski storage. The van is built as a full-on expedition vehicle, so we can fuel it up with 400 liters of diesel and get a massive range out of it. I can put it in 4x4, which ironically I almost never use in Austria because the roads are all paved. However, I really built it to go abroad to places like Iran or Turkey and go offroading. It’s a bit tight to live in with a big crew, so you need some discipline to organize stuff and keep it all dry. We also have a second, smaller van for the production crew to live in with a little more space.

TGR: Halfway through the trip, things got a little rowdy with Sam Smoothy taking a big crash. What was that experience like for you?

Fabian: We both skied a big line that day, and noticed that there was this little layer on top with pockets that would release on us. It was something that’s normally easy to manage, but with big terrain things get a little more complicated. We both skied a line, and I was sitting in the hut eating my Kaspressknödel (a delicious Austrian lunch treat) and Sam really wanted to go up and ski it again, so he went up alone. While he was up there, he kept losing communication, so he dropped in a little angry. Suddenly, the whole thing released but he was able to stop in a safe zone on top of a little spine. I told him to chill for a minute, but then he continued skiing his line without much snow left on it and he fell down some big cliffs. It happened so fast I couldn't believe it at first, but heli came in under 10 minutes. Tyrol has insane rescue infrastructure, which is always nice insurance, but I never want something like this to happen, especially to a close friend. 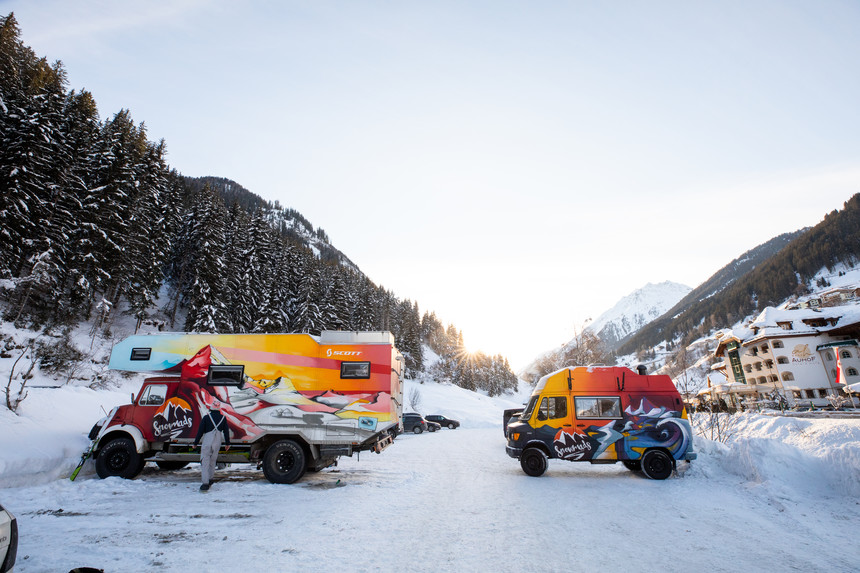 TGR: How long have you been skiing with Sam and Griffin?

Fabian: I have skied a lot with Sam before, skiing in New Zealand, competing on the Freeride World Tour, and have always done some small trips with him like filming for Legs of Steel. Our styles of skiing go really well together I think. Griffin and I had never skied together before this trip to Austria. It was a funny moment when we hiked up a face together after Sam’s crash and realized that. It was cool to re-explore my home with those guys, skiing AK terrain in Austria in January. Many of those lines were skied for the first time ever, lucky for us conditions were perfect, so I wasn’t hard for me to show these guys the best spots around my home! 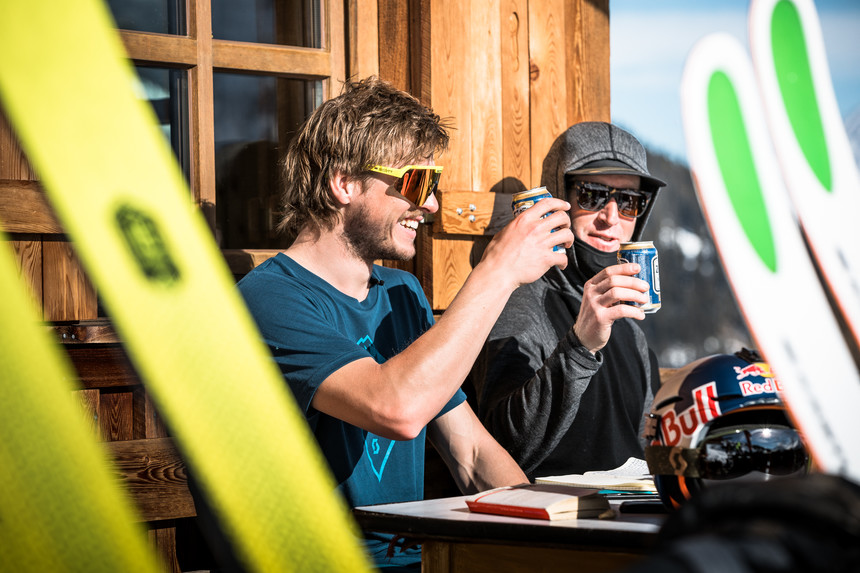 Sharing the mountains with friends is a special experience. Mathäus Gartner photo.

TGR: It looks like you had a busy rest of the season after the boys left. What else did you get into?

Fabian: You’re right, it was a super busy season. I have been working on this project called Snowmads for a few years now. It’s basically a collection of like-minded skiers around the world that share their zones with one another. I went to Iran and Greece to check out some of the home areas of my friends, and also spent some time in Austria’s Pitztal to visit my dad and ski some new lines with him.

I also went to Tajikistan for an expedition, where we wanted to go ski spines that we found on google earth. The weather was so horrible, so we just lived with locals for two weeks planting beans and butchering chickens! I spoke the language kind of, so I could understand some, and I turned into our group’s translator.

Back home, I also went on one of the most ridiculous ski missions of my life involving a zeppelin!

Fabian: Exactly! A while back, my friends went balloon skiing and naturally wanted to one-up it. I got asked “are you keen to go zeppelin skiing?” Of course I had to say yes. It was a huge pain in the ass to get it going, since the zeppelin couldn’t really fly any higher than 1700 meters, which isn’t really high enough to get to good skiing in Austria. Somehow, the pilots were able to fight the machine up to 2100 meters, and we ended up rappelling out of the cabin, which was really intense.

TGR: Tajikistan, Zeppelins, what’s next for you?

Fabian:This summer, I’ve been flying and biking a bit, which for me is always a good way to keep the mind sharp for skiing. I also spent five weeks in a kung-fu school in China. It was really hardcore training and was really interesting to learn new movements and adjust to the military-like Chinese regiment. It took me awhile to re-adjust back to life in Austria after coming back from that one!

My plan for next year is to move to Iran for one year to live and ski there. I’m really excited to just drive over there in October and be a skier in a new country.