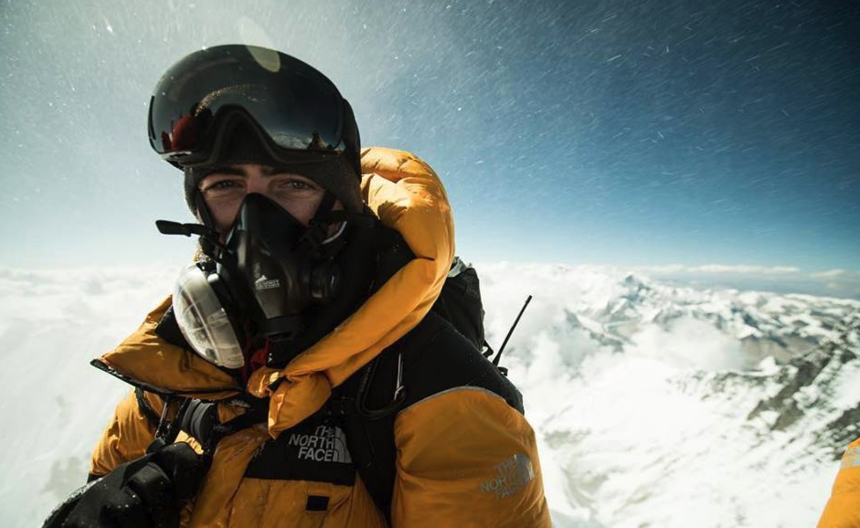 On September 30th, skiers Hilaree Nelson and Jim Morrison made history by becoming the first to ski off the summit of 27,940-foot Lhotse. The team linked the Lhotse Couloir to the lower Lhotse face in a 6,000 vertical foot descent. The two Americans were accompanied by a team of 5 Sherpa and two longtime TGR cinematographers, Nick Kalisz and Dutch Simpson. We caught up with Simpson when he stopped by the TGR office yesterday to hear his part of the story.

Dutch, just a few weeks ago, I feel like we were having beers at the Coach, and now you have an 8,000-meter peak under your belt. How’d you do it?

[laughs] Well, I think saying that we “off-the-couched it” might not be actually too much of a stretch. It’s crazy what the human body can do. I got the call from the North Face while I was at Ian Macintosh’s wedding in August and realized I had about 10 days to prepare myself for a Himalayan expedition. I immediately started sleeping in an altitude-simulation tent so I could get a head-start on acclimatization, which I think really helped. My training regimen was running up Snow King a few times with a pack.

It really all happened very fast. One day we were flying into Kathmandu and connecting higher up into the mountains, and then we started walking towards Everest Basecamp, which served as our true acclimatization. We pretty much walked from a little town called Namche all the way to the summit. Of course, hiking higher and higher through that valley towards base camp prepares your body really well.

We heard you were the only ones up there at this time of year, isn’t Everest normally really crowded?

Jim and Hilaree picked this time of year for a good reason: snow. Summer is monsoon season in the Himalaya, which means lots of snowfall at the high elevations. That allows for the couloir and lower face to fill in with snow, but makes it really hard to climb the normal Everest route, so nobody really shows up. In spring and summer, the couloir tends to be all rock. We got really lucky with our weather window; the jet stream dipped and started blasting the summit a day after we were up there. I don’t think anybody would have survived being up there in those winds.

Besides our four-person team, we were joined by five Sherpa, two Icefall Doctors, and a couple of cooks. Those guys are the real superheros, especially our Sherpa team from the Khumbu Climbing Center. Ila Nuru Sherpa and Fu Tashi Sherpa took us all the way to the top. 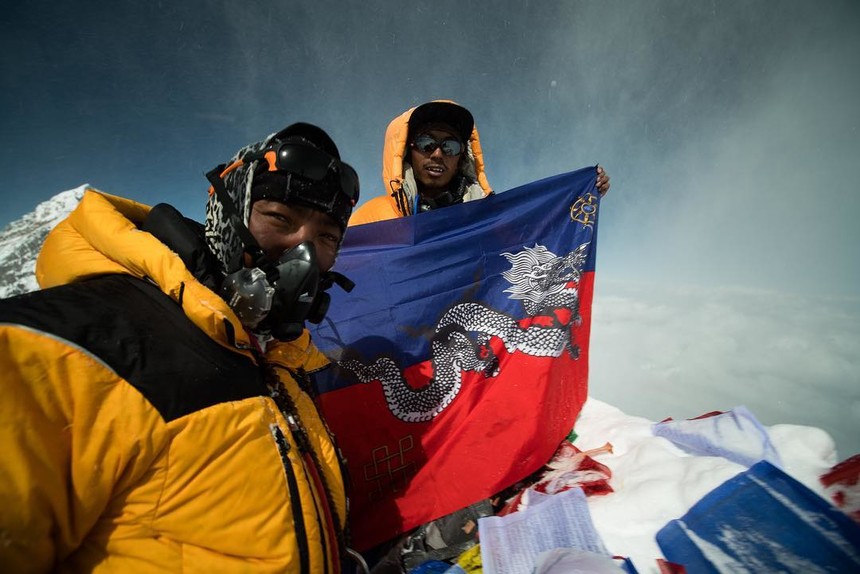 The Sherpa duo that made the magic happen. Dutch Simpson photo.

What did that mean for climbing, was the route pretty straightforward?

Of course, Hilaree and the Sherpas knew the way up on the upper mountain because they had climbed it before, but we still had to fix our own lines the entire way up. The crux and scariest part was definitely getting through the Icefall, which is this fucked up section of glacier between Base Camp and Camp 2. Those are the biggest crevasses I have ever seen, and the whole thing is constantly moving beneath your feet. We had to cross through it a few times, and Nick and I felt like we were going to die every single time because of rock and icefall, as well as the fact that the crevasses there look like they go to the center of the Earth. It’s definitely a bit gnarlier than AK up there.

We had our Puja, this crazy ceremony the Sherpa do before any big climb, and then it was 21 days of on-mountain work to get up and down.

Once you left Base Camp, what was the plan from there? How did the rest of the climb pan out?

We left Base Camp for our final push after already having moved gear up to Camp 2. Jim and Hilaree were in ski boots from then on. At that point, Nick and I realized that we weren’t bringing our skis any higher, it was just too dangerous for us. Leave that to the pros.

The altitude first really started hurting me at Camp 2, which sits at the bottom of the Lhotse Face at around 21,000 feet. We actually climbed up to Camp 3, about two-thirds of the way up the face at 24,000 feet and spent a full day there, which I thought was the hardest day of the whole trip. I felt like my brain was going to explode, and I was supposed to operating my camera and documenting stuff. Some days I couldn’t even pick it up without wanting to throw up.

The funny thing is you get used to it pretty quick; when we got back down to Camp 2, I actually felt pretty much okay. I also think the fact that Jim and Hilaree made awesome turns down the lower face that day got us all pretty fired up about going higher and finishing the mission. 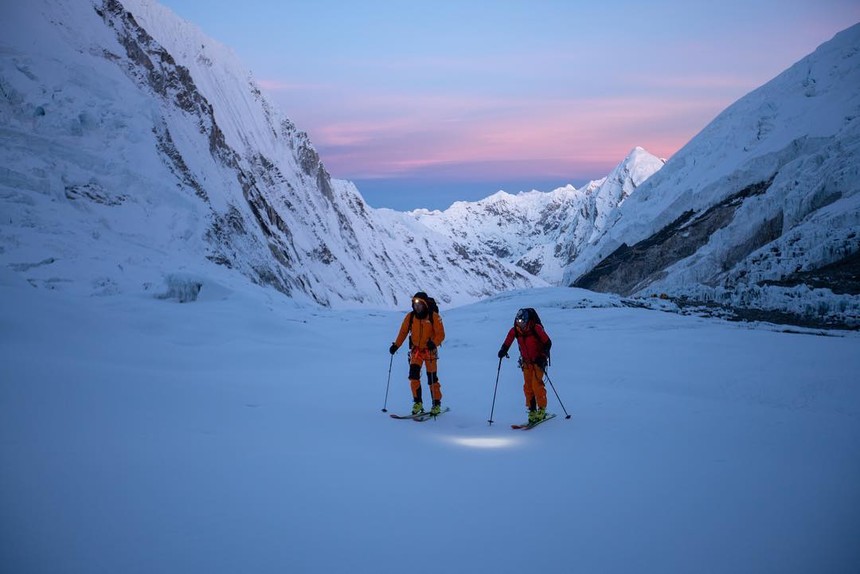 Did you guys ever have any oh-shit moments?

Oh man, there were a few of those. I think the scariest thing was when we got pinned down by weather on a gear shuttle run up to Camp 2. We got stuck just past the Icefall in a whiteout, and the whole mountain started coming down on us. It sounded like a war going on outside, with missiles of rock whizzing by our heads. We couldn’t see anything, but kept hearing huge pieces of rock and ice come crashing down just outside our tent. We actually just sat there in our tent playing cards for a bit to take our minds off the situation because there was nowhere to go. At some point before dark however, we all decided it was stupid to stay, so we just blindly made our way uphill towards the safety of Camp 2, where I think I cursed for like an hour straight and swore I would become a tax accountant or something.

We ended up leaving a coil of rope and some other supplies at that spot, and when we returned a few days later we realized they got swept into the bottom of a crevasse. It’s terrifying to think that coil could have been any of us.

The fact that Jim and Hilaree were such great mentors really helped in getting through those moments and up to the top.

Tell me a little more about that final summit push.

Well, once we all felt as ready as we were going to get, we made a final weather check and saw that we still had a day or two left in our weather window before the jet stream started blasting the mountain. I don’t think I really slept much the night before. We left camp at 2 A.M., and climbed the fixed lines our Sherpas had put in to reach the summit exactly 12 hours later. Our route went straight up the couloir, just like as if we were booting up a line in the Tetons, just at twice the altitude. We spent quite a long time up top because the weather was so good. Like really, really hot. 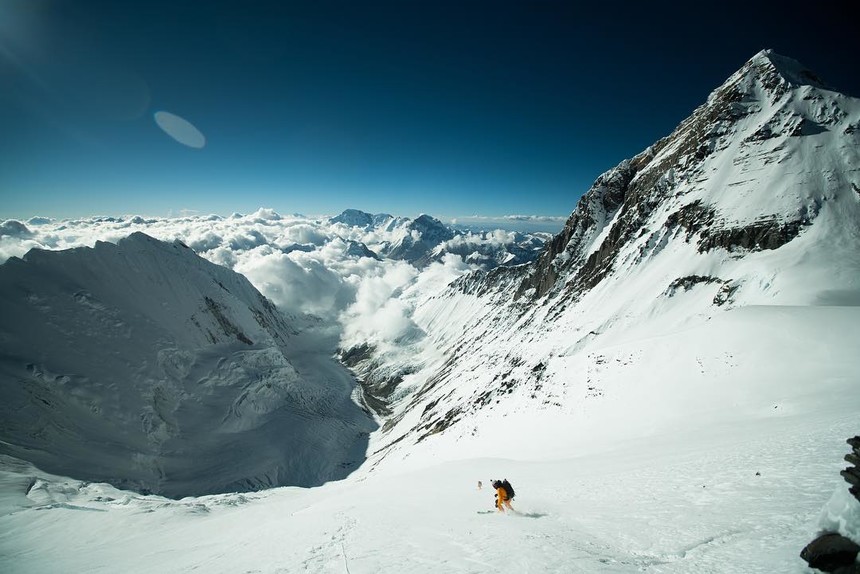 The turns that made it all worth it. Dutch Simpson photo.

What was it like watching those two drop in on skis from the 4th highest peak on Earth?

It was definitely pretty sick, but I think Nick and I were so focused on getting ourselves down and actually filming the descent that we had little time to think about anything. They would make a few turns while we filmed, wait for us to walk down the fixed lines, and then repeat that process until we were out of the couloir. The snow was everything from mank, to ice, to windblown crust, to really good powder. They skied all the way down to Camp 2.

Man, high altitude skiing is really something else.

How did you guys film it?

[laughs] Well there were definitely no REDs involved. Nick and I went super-light and shot the whole thing on two DSLRs. I used the new Sony A7sr3, which was pretty much the perfect tool for the job. We both stored our cameras in a chest pouch for easy access, also nice because we had to shoot everything on-slope. The barbie angle would have been shooting from across the valley on Everest! Also drones can’t really operate at that altitude because the air is so thin, so we didn’t even bother trying.