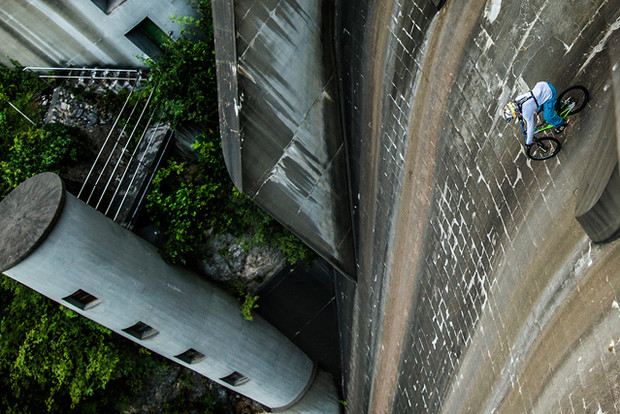 Primož Ravnik near the top of his descent. That's a long way down. Peter Podobnik photo.

Imagine how butt-puckering it would be to ride down a nearly 200-foot dam, then slam into the water head-first at more than 40 mph. Well, on August 28, a crazy plan to do just that came to fruition, hatched by Primož Ravnik, a Slovenian mountain biker. (We posted the POV video last week)

Accompanying Ravnik for the stunt were two photographers, Nejc Puš and Peter Podobnik, along with eight other individuals helping with the shoot. Puš and Podobnik both have impressive portfolios, and have each been shooting for about five years, primarily in the realm of action sports.

“Primož [Ravnik] is the man to blame for the location scouting and organizing the whole thing,” Puš said. “He’s let go of the traditional racing attitude and gone his own way. I wouldn’t say he’s pushing the limits, more likely he’s trying to show there is more to this great sport than we could possibly imagine.” 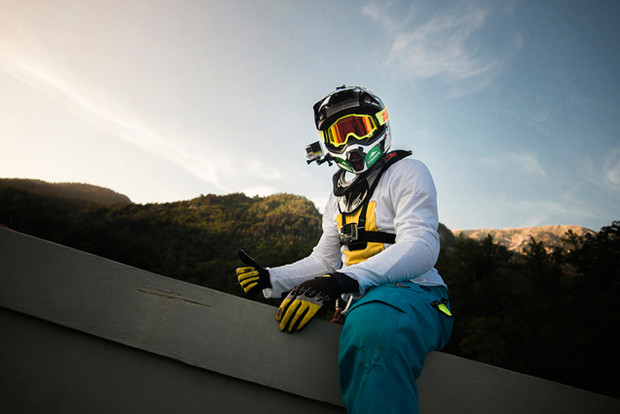 Ravnik preparing to lower himself down to the top of the dam. Peter Podobnik photo.

Ravnik is from a small town called Žirovnica, Slovenia, located on the southern slope of the Karavanke Mountains, and has been biking since he was two years old. He competed for years in cross country and downhill, but now considers himself an adrenaline junky and what many bikers would consider a freerider, which pushes him to do stunts like the dam drop.

“It's all a matter of imagination, that's why I would like to say to all of you: let yourself go and explore the world, it’s a beautiful place and has countless incredible locations,” Ravnik said. “One more thing; to be yourself in a world that is constantly trying to make you something else is the greatest accomplishment.” 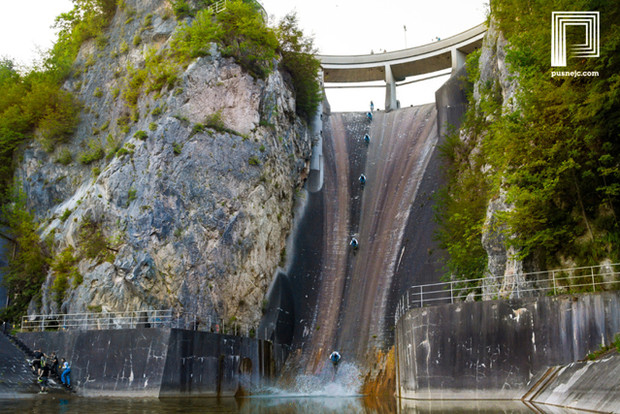 The dam, though as Puš says, is not the biggest thing in the world, but still 30 times higher than the average man, so his goal with the project was to show the scale of the dam in comparison to a human. The crew couldn’t disclose the location of the dam, but Ravnik said that it is the tallest in Slovenia.

Standing on top of the damn, Ravnik said he had many thoughts rushing through his head, but there was one that really resonated and struck out to him the most:

“If I don't do this today, I will question myself for the rest of my life, why I didn't pull it through when I had a chance,” he said. “My biggest fear in life is not living the life to the fullest, to just exist inside the average, wasting my time doing things I don’t care about.” 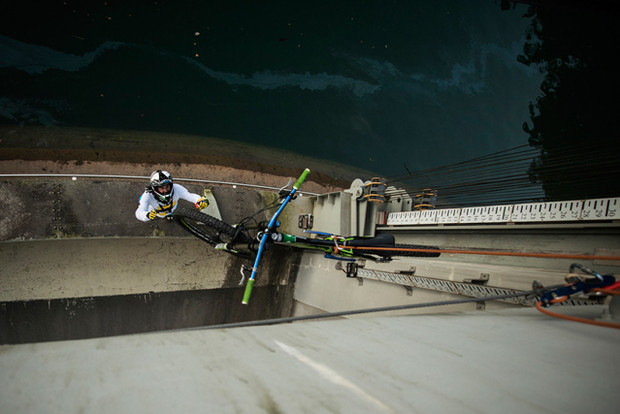 The crew lowers Ravnik's bike down to him before the drop. Peter Podobnik photo.

Riding down, Ravnik was initially able to control his braking, but he quickly realized that any mistake in braking could have made his tires loose grip and could have drastically changed how he hit the water.

Hitting the water at faster than 40 mph, his goggle lenses were instantly ripped out, and for the first few moments Ravnik was disorientated, but physically in good shape. 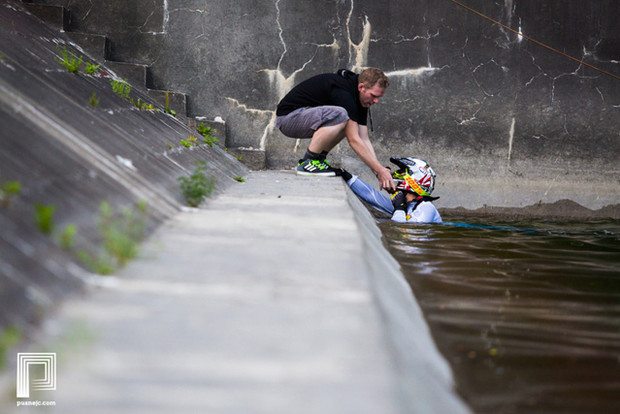 Getting a little help out of the water after impact. Nejc Puš photo.

Going into the shoot took a lot of planning and preparation, including setting up cameras top and bottom, getting timers synced, and lowering Ravnik’s bike down to him at his perch on top of the dam. Puš said that the timing was the hardest part about the whole thing.

“Everything had to be done really, really fast, and more importantly, we only got one try,” Puš said. “If I had missed the settings or the remote cameras wouldn’t be triggering the whole project would go to shit. And, yeah, the home-made schnapps at Figaro later on. That was tough too.” 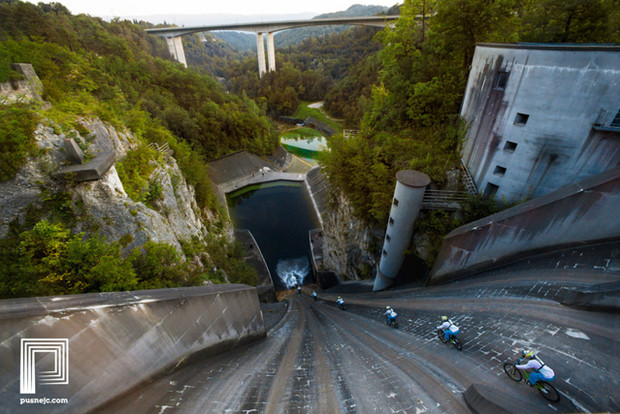 Quite the view for quite the stunt. Nejc Puš photo

With high risk projects like the dam drop, Puš said they all have one thing in common, a small number of opportunities for repetition, or none at all. With the dam, it was even tougher, and he said that the scale just made it hard to wrap his head around.

Awesome story! I will post it https://writemyessay4me.org/blog/parts-of-essay here on my website. My friend will enjoy reading it for sure.

I wouldn’t say he’s pushing the limits, more likely he’s trying to show there is more to this great sport than we could possibly imagine. - tow truck service

I wouldn’t say he’s pushing the limits, more likely he’s trying to show there is more to this great sport than we could possibly imagine. - long distance towing