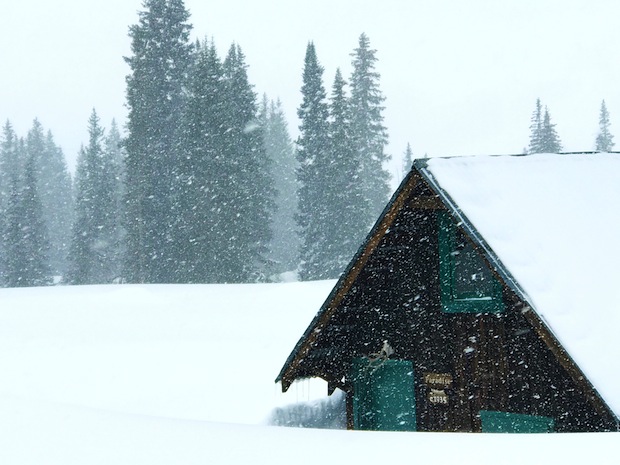 We skied into a Dalmatian coat of scattered wood-frame buildings cushioned by a white blanket of deep snow. To my left, a small cabin with dulled evergreen frames and upside-down antlers nailed above the front door was righteously called, Paradise, denoted by its sign and dated back to 1935.

The half-buried doorway and snowdrift, which inched up by the minute, made me chuckle for the shack’s name: This valley was already chalking up marks as an idyllic getaway for a ski bum. 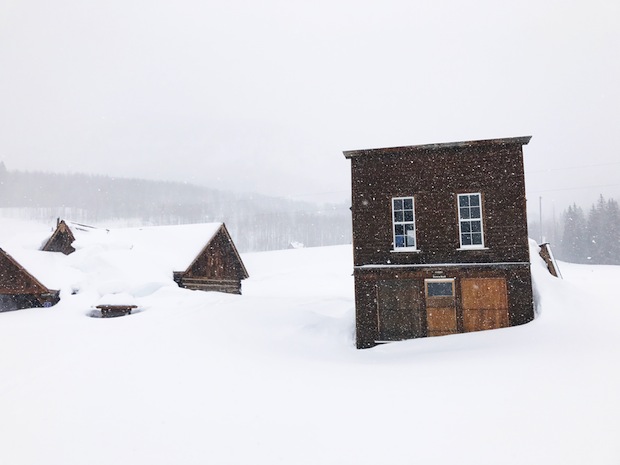 Thirty-four backcountry huts and a 350-mile web of routes comprise Colorado’s iconic 10th Mountain Division. Though, booking one of the coveted pads is comparable to lining up Telluride Bluegrass tickets or getting your name pulled for the Grand. Reservations for the most popular huts tend to fill up fast and early, so fingers crossed that you get the one you want.

Good news: Other huts do exist in Colorado. One such goldmine is here, four miles northwest of Crested Butte Mountain Resort in the ghost town of Gothic.

Morgan Tilton skating through the ghost town of Gothic, CO. Will Rochfort photo.

To my right, “Town Hall” stood straight and tall—which, unlike the name suggests, served as the community saloon. In 1879, several hundred eager folks rushed to inhabit the hardly-existing town after headlines sensationalized the area’s silver ore. Locals’ casual conversations at the watering hole would escalate into debates related to the mining industry.

The mining opportunities dried up forty years later and 150 structures were left deserted, according to History Colorado archives. 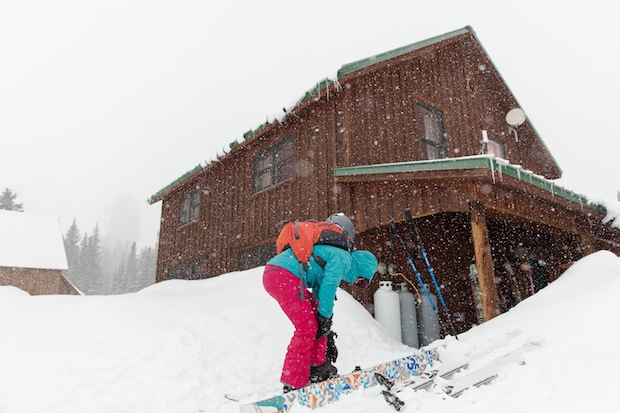 A decade later, Gothic was saved, by a group of biologists. Dr. Johnson, then Dean at Gunnison’s Western State College, led the movement to preserve the decrepit buildings and wild basins of the West Elk Mountains. The protected field station—Rocky Mountain Biological Laboratory (RMBL)—now encompasses 70 buildings and 1,000 acres.

As one of the oldest high-altitude alpine research areas in the world, scientists flock here from around the globe.

Ours was Maroon Hut, a luxurious two-story house with in-floor heating, electricity, and running water. The kitchen was fully stocked with cookware, a microwave and coffeemaker. Though we saw no one, a sign posted on the fridge told us that two caretakers lived in the neighboring cabins.

A 2016 documentary short, The Snow Guardian, shares a glimpse into Billy Barr’s life and his 40-year record of snow. Day’s Edge Productions film.

One person fell in love with Gothic and never left: Billy Barr. On the periphery of town, Barr has lived in a small cabin with a greenhouse for more than 40 winters. To preoccupy the long winter months, the snow guardian --as Barr is called-- picked up a hobby: He started recording snowpack data.

Following four decades of meticulous note-taking, a twice daily routine, Barr's comprehensive journal has --albeit unintentionally-- built a strong case for climate science and the immense changes that have surfaced in less than a lifetime.

As documented in, The Snow Guardian, rather than seeing 4 to 5 record high temperatures, Barr recorded seven times that amount in 2015. Most recently, temperatures rose to 52 degrees Fahrenheit at almost a record pace this March, reported the Crested Butte Avalanche Center (CBAC) in reference to Barr's observations. 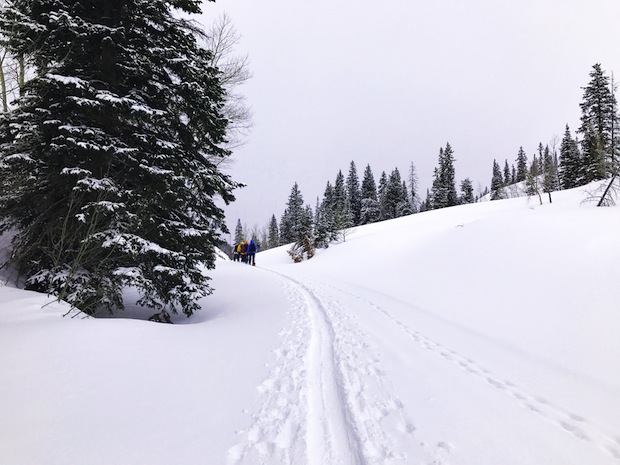 Day one's straightforward, flat approach promised two things: we could very easily carry a boatload of beer, and we also arrived early enough for a tour. As we moseyed out, we avoided skiing or digging snow pits anywhere in the actual township, to help protect any snow-buried research projects from being disturbed.

RMBL recently received $3 million, from the National Science Foundation and Department of Energy, to help further research over the next five years. Current projects include the study of nitrogen and carbon for an application in hydrology, examining the elevational shifts of aquatic animals, and marmot research to understand evolution in a rapidly changing environment. 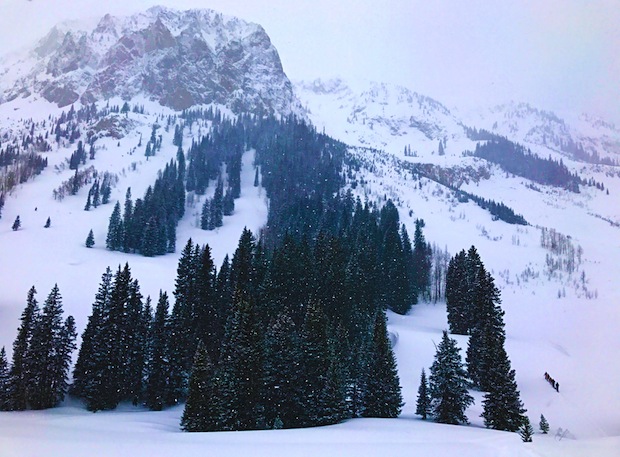 The crew lines up below Gothic Mountain. Morgan Tilton photo.

We skied northbound and climbed below the extreme, sheer face of Gothic Mountain, which towers to 12,625 feet. On the opposite side of the valley lies Rustler Gulch, Avery Peak—well identified by its diamond shape, at the top of Virginia Basin—and Copper Creek, all to the east. That trio shoulders the boundary of Maroon Bells Snowmass Wilderness, home to six 14,000-foot peaks.

As we synced with the landscape, it was hard for me to not think about what this place might be like in 50 years.

Over the last 40 years, snow has been melting two weeks earlier at all elevations. As the soil moisture levels shift, warmer and drier conditions are moving upslope, according to a 2016 RMBL report in reference to Dr. Kailen Mooney and Dr. Will Petry’s research, published in Science. 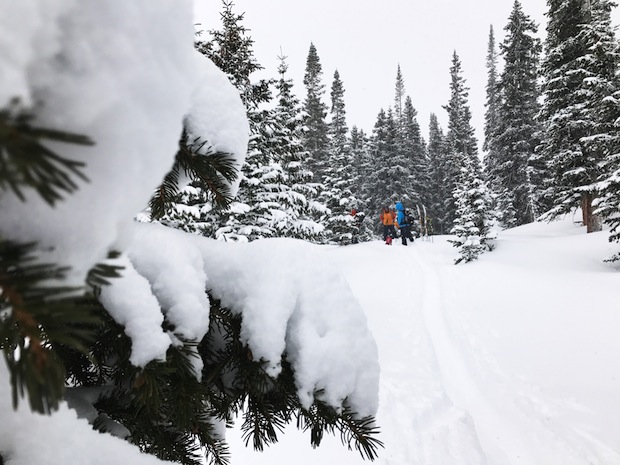 Transitioning at the top of the climb. Morgan Tilton photo.

Colorado’s famous wildflowers and subalpine forest, among other plants, follow the trend. Impacts vary per species: Engelmann spruce may not survive higher elevations, and the population's lower-elevation boundary could recede upslope—meaning, the demographic may shrink or disappear.

Limber pine, on the other hand, might persist as it advances upward, though at a very slow pace. Regardless, most if not all seedlings are highly vulnerable to climate variation, according to a 2016 report in Global Change Biology. 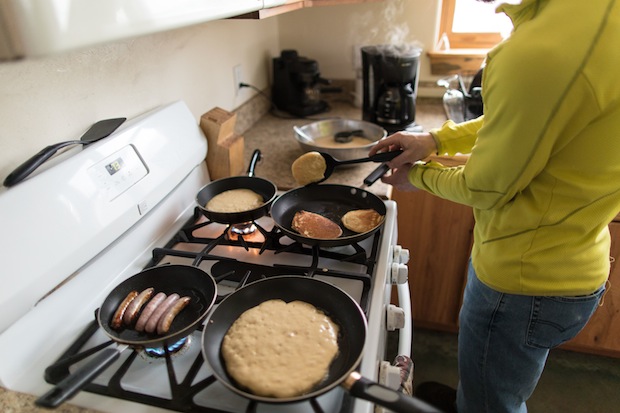 With the sun, after a laidback morning of pancakes and coffee, we stepped outside hoping to bump into Colorado's snow guardian. We made our way toward Copper Creek and passed Town Hall. In the '70s, the building served as a dormitory and kitchen for college students, and Barr had lived there. Passersby would curiously knock or poke their heads inside, only to be surprised by a few young dudes rather than ghosts.

“The natural fascination of people to be drawn to the past makes it important to save what little of it exists, for whatever reason it means to each individual."

“The natural fascination of people to be drawn to the past makes it important to save what little of it exists, for whatever reason it means to each individual,” Barr wrote to the State Historical Fund in support of Town Hall’s preservation, in 2002.

That sentiment of preservation holds just as true to the places we explore. 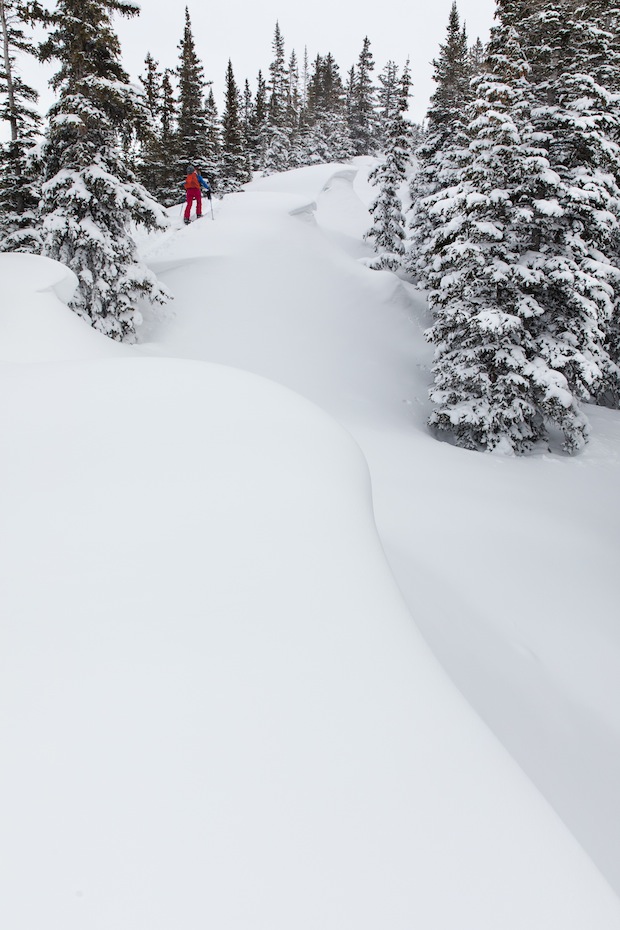 Transportation: Vehicles can be left overnight at the Gothic Trailhead. Or, you can take a local, free shuttle to the TH.

How To Ride Vancouver’s North Shore & Why It’s…

The Bucket List: How to Ski Or Ride Tuckerman…

The Comprehensive Guide To The Whistler Bike Park

TGR’s Guide to Skiing With Greek Gods - The Bucket…

The 7 Things That Should Be On Your Utah Winter…