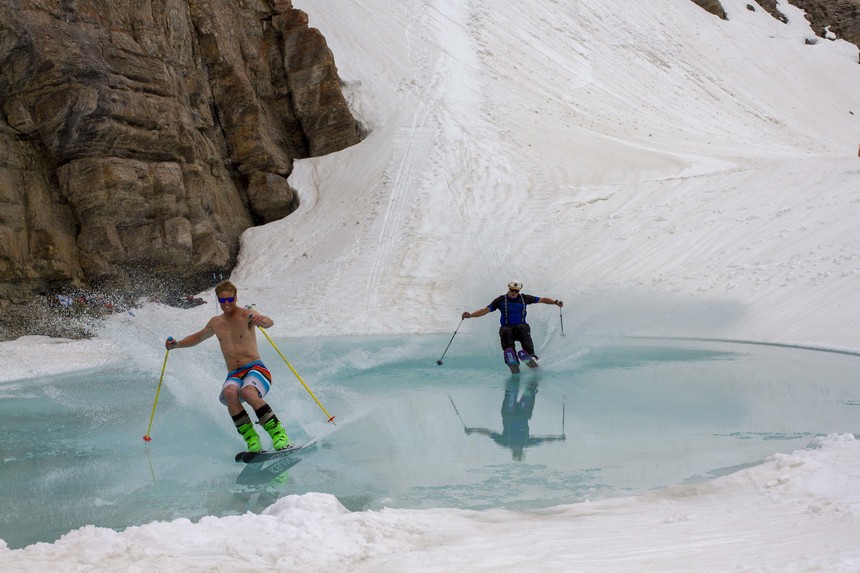 Winter is technically over, but it’s still that time of year where all of us are seasonally confused. One weekend we are still skiing pow, the next we’re on bikes, then it’s climbing season, but then we get the itch to ski again. For a select few, that urge to ski simply never dies. If there’s snow, they’ll go.

This season, Tim Durstchi, Owen Leeper, and Sasha Motivala took it upon themselves to embody that principle. After a highly successful winter season, skiing big lines all over the world, these skiers came back to their still-snowy home ranges and felt the urge to give one final high five to winter. Over the last few weeks, this crew has been quietly ticking off steep lines in the Tetons and beyond. Here’s a look at what they’ve been up to.

Tim Durtschi has always been a fan of the Little Cottonwood Canyon jump culture. Whether it’s big backcountry gaps like Chad’s or Pyramid Gap on pow days, or slushy inbounds jumps in the spring, Durtschi is a sure bet to be on the scene. This year’s adventures centered around the infamous Alta Fence Jump, a staple of post-season skiing in the area that involves a sizeable booter over an avalanche fence. 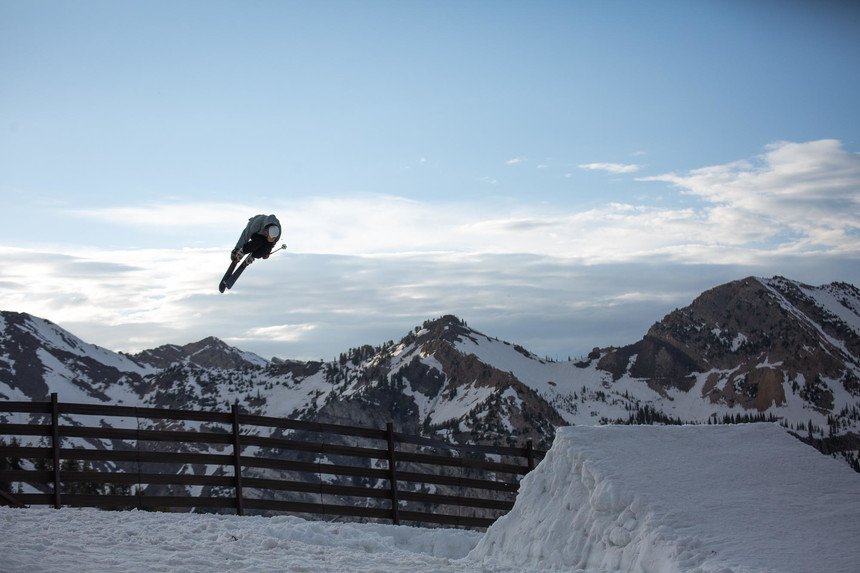 Odds are you jump over that fence, Tim. Rocko Menzyk photo.

“Alta has this sick policy where you can hike inbounds after the lifts close. We look at that jump spot all season from the lifts, but once the resort closes you can hike up and finally build it and hit it,” says Durtschi.

To him, hitting the jump is awesome, but hanging out with friends and watching the progression take place is even better. 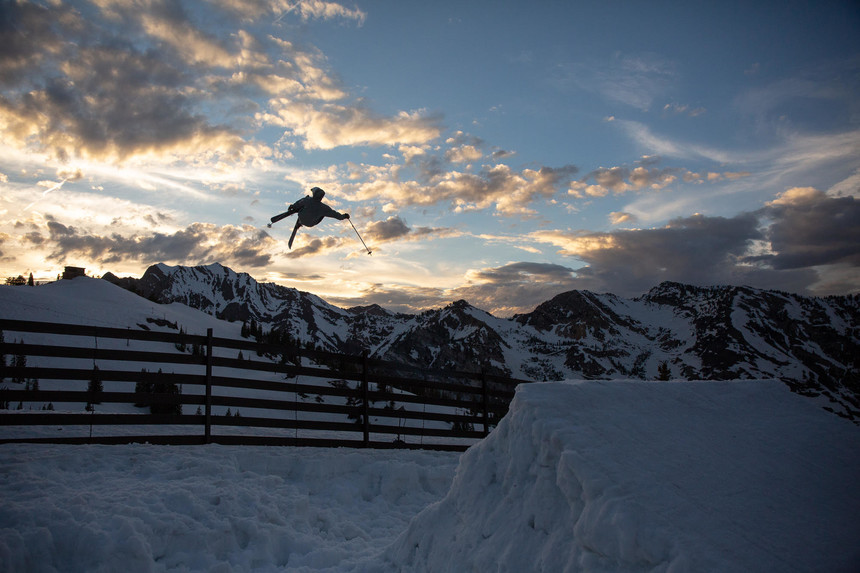 One of the best parts of spring skiing may well be the long days and warm sunset jump sessions. Rocko Menzyk photo.

“It takes a whole crew to build a jump like that," says Durtschi. "Shout out to my buddy Andrew Pollard for putting in the hard work and taking the lead this year. Not a bad way to prep for his spot on next year’s Freeride World Tour!”. Pollard qualified himself for a coveted spot on next year’s FWT.

Spring tends to be the best time to ski steep lines thanks to low avalanche danger and a deep snowpack.

This rang especially true for the Wasatch this year, with a less-than-stellar start to the season thanks to low snowfall and extended periods of warmth. Luckily, March and April finally provided the goods, making perfect conditions for skiing spring steeps. Convening in the Wasatch, Durtschi, Leeper, and Motivala teamed up to make it happen. 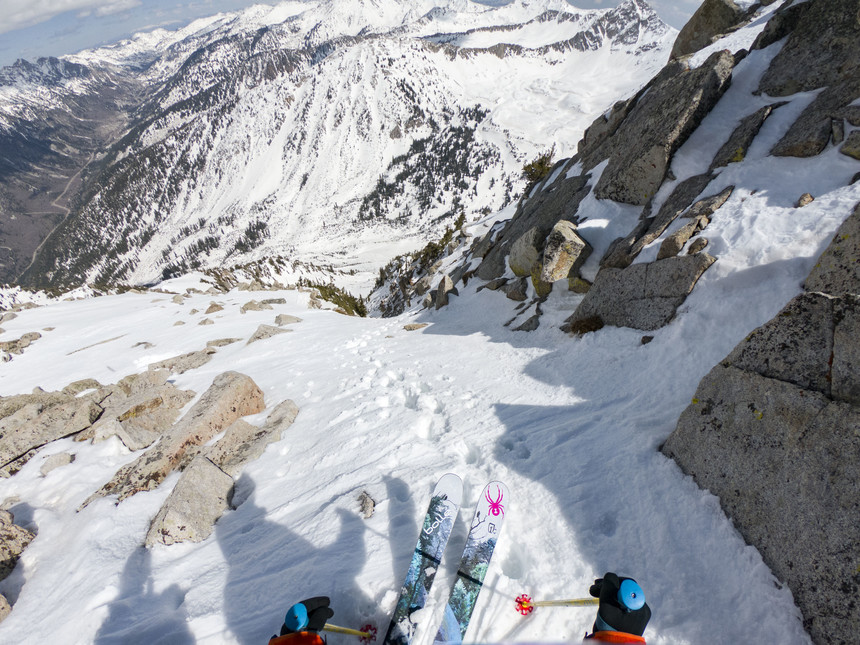 “Sasha and I were both coming back from a trip Alaska and ended up in Salt Lake," says Leeper. "We ran into Tim at Snowbird and invited him to join us on the Hypodermic Needle, which had been our lists for a while. We went for it the next day and ended up with really good conditions in the couloir, but with the classic heinous bushwhack out to the road." 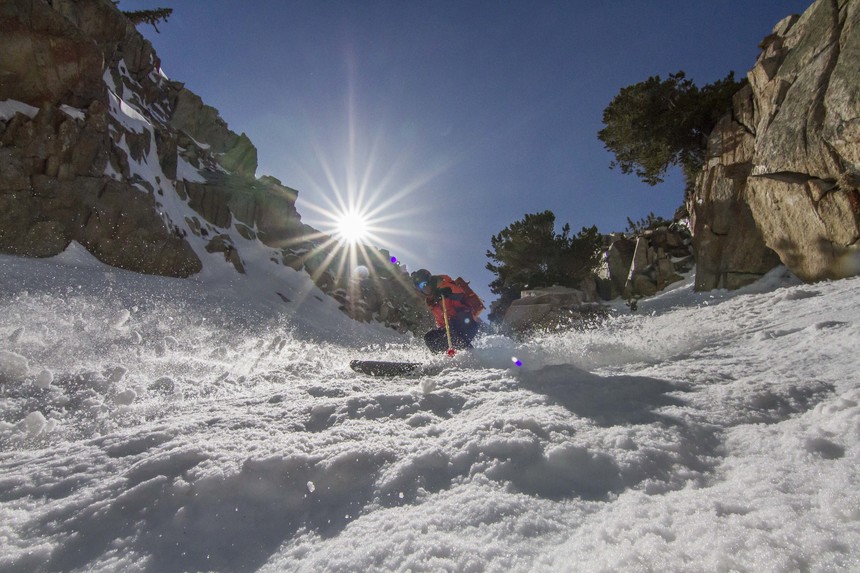 Inside the Needle. Sasha Motivala photo.

“The Needle was our first true spring mission, starting not-too-early but requiring sketchy river crossings over log bridges, relentless bushwhacking, a sweltering skin up into the alpine and for me a terrible sunburn on my arms that I had forgotten to put sunscreen on and were charred so badly by the time we got to the top it was painful to touch them,” says Motivala, “I love hanging out at the top during the spring though, enjoying the sun and the views, and of course the way down which is what we had slogged about six hours for so far.”

The Spooky Face and Bubble Fun:

After skiing the classic Wasatch Hypodermic Needle, Leeper returned home to Jackson to find the Tetons in full spring mode. That meant getting up at ungodly hours, but skiing some of the best runs of his life. After watching friends tick off big lines all over Grand Teton National Park, he decided to get in on the action himself, joining Mark Smiley (who had just returned from traversing the Alps on skis) to ski Nez Perce’s Spooky Face. 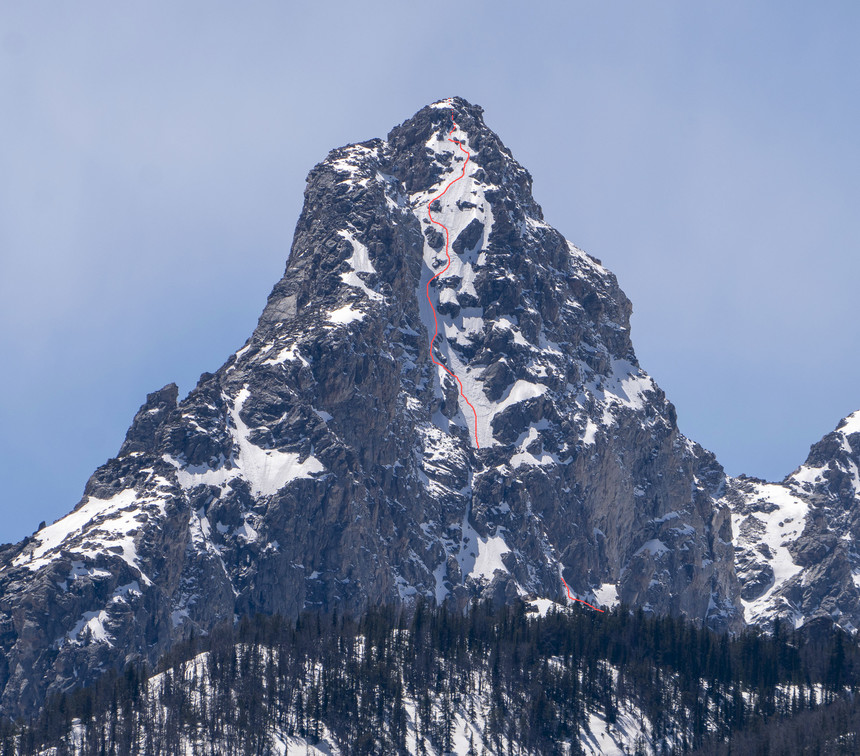 The line, which involves scary ice and mixed climbing to the summit, follows a rocky and extremely exposed couloir, finishing with a mandatory rappel out the bottom. A day later, the two teamed up again to make what they think to be the tenth ever descent of Buck Mountain’s Bubble Fun couloir, another terrifyingly steep line on the north side of the peak.

A lesser-traveled range near Jackson, the Absarokas and Togwotee Pass, make for some epic roadside missions. Driving up over Highway 287, skiers are greeted with a wall of couloirs less than a mile from the car, the kind of skiing one would expect to find in the Dolomites. This could be some of the easiest access to steep skiing anywhere in the country, but bringing a sled opens up countless more possibilities. Over the course of several days, the crew took out the sleds to explore the farther reaches of the range, ticking off steep lines and taking advantage of their strong legs for endless bootpacking. 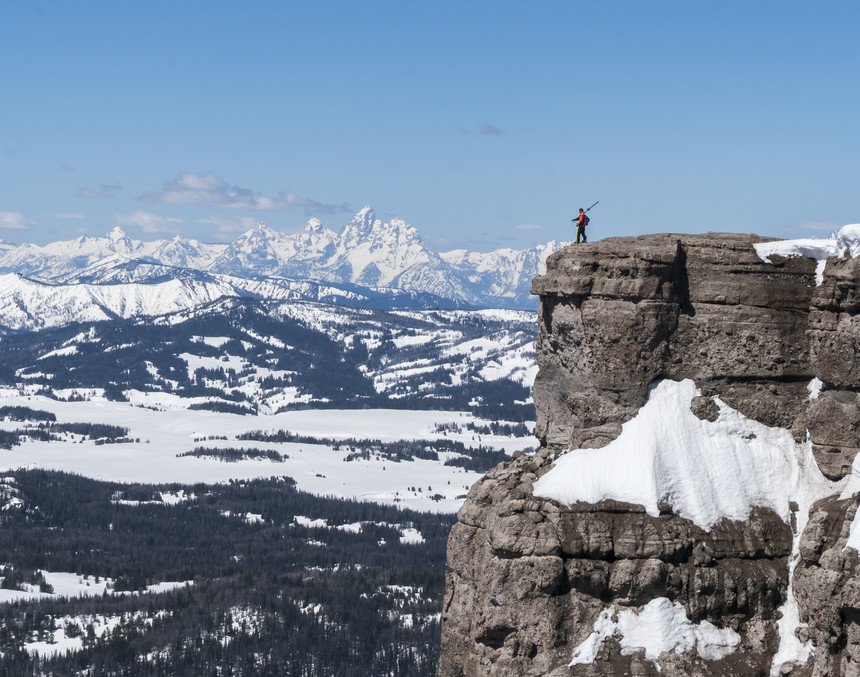 It was Durtschi’s first time skiing in the zone, after spending previous springs in the Sierra and on Oregon’s Volcanos. The Absarokas had always drawn him in, thanks to their unique skiing and incredibly easy access, but had somehow escaped him until now. While human-powered access is easy, bringing a sled is the way to go to out here.

“The amount of lines up there is pretty mind-blowing; there are, no joke, probably two dozen couloirs within a few hundred feet of each other," says Durtschi. "You kind of pick the one that you are stoked on when you stand beneath it, and start booting up it.” 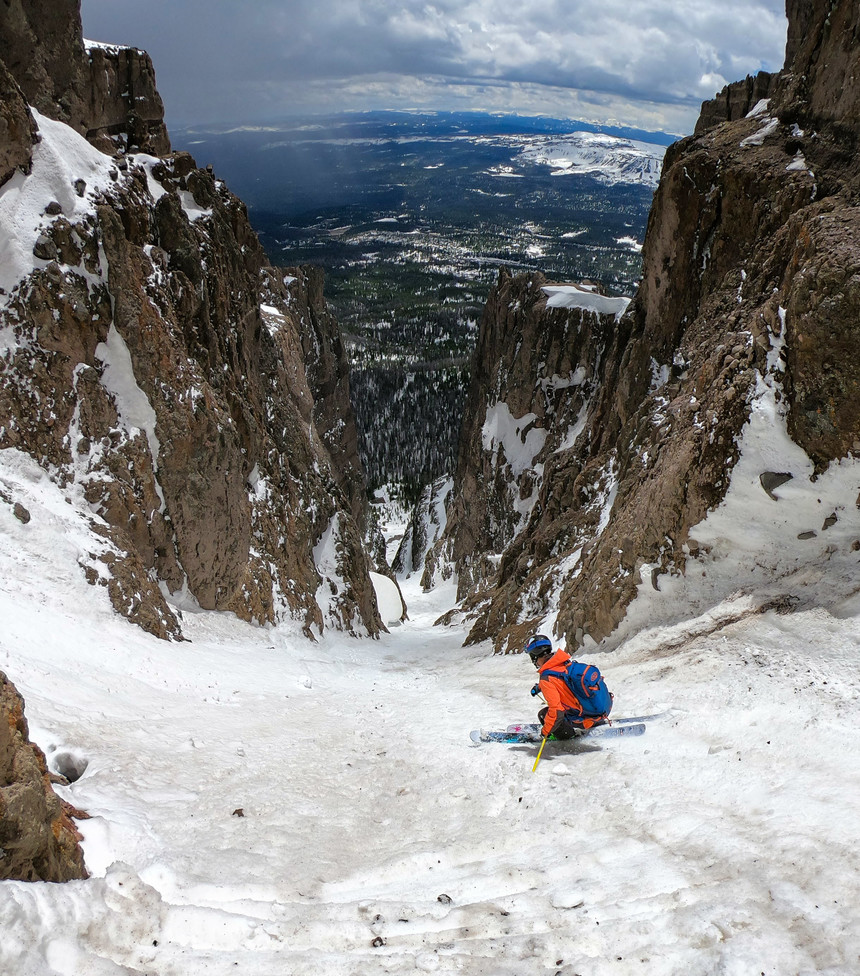 Owen Leeper drops into one of many lines exactly like this skied that day. Amon Barker photo.

After the weather forecast called for an extremely mixed bag, Leeper went for the zone a day early, ticking off several big lines in a day. Turns out that it’s nice to have a friend scope a zone a day early, Durtschi and Motivala found out when they returned the following day to a nice bootpack already in place on each line.

“Bummed that we missed out, the next day Durtschi and I made our way out there and through clouds, sun, rain and more sun, we got to ski four of the chutes, including the up-and-over that Amon and Owen had the day before, using their boot packs to make it easier,” says Motivala. 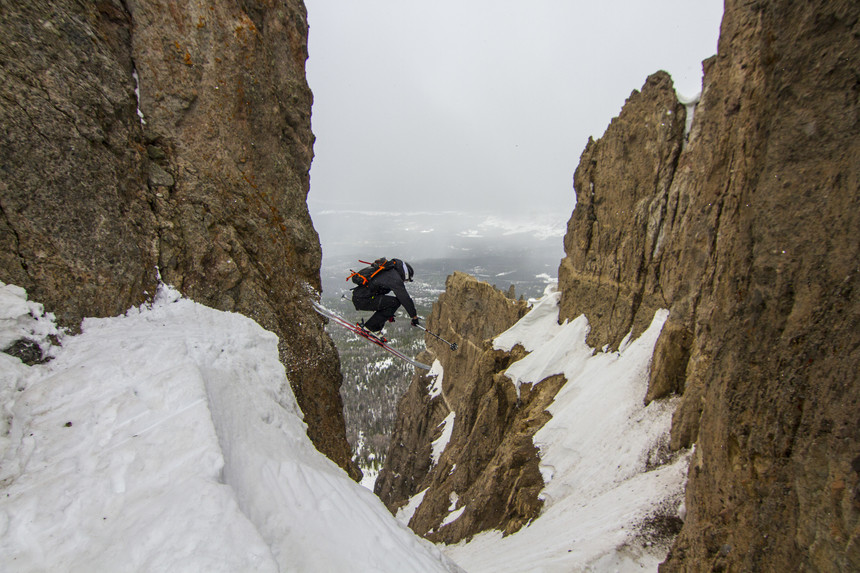 What is spring skiing without a good pond skim? Once Jackson Hole’s tram re-opened for the summer season, the crew reunited and was afforded easy access to the resort’s legendary sidecountry. After shredding a few laps on Cody Peak’s infamous lines, they spotted a meltwater pond at the bottom. It was time to take off the shirts and hit the pond skim. 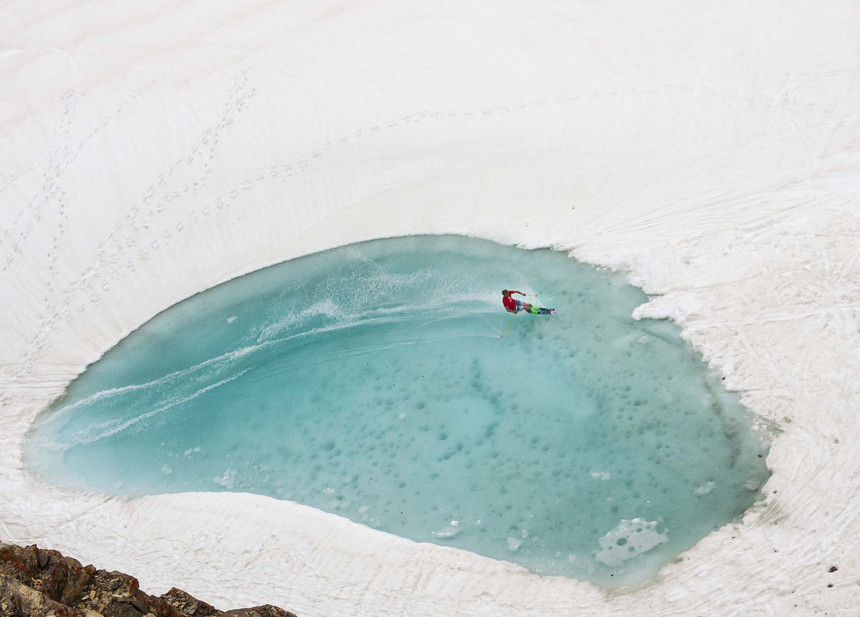 “It wasn’t quite boardshorts weather, since it was half raining, half cloudy, but definitely warm enough to hit it a couple of times!” says Leeper.

Turns out it doesn't matter too much about getting wet when you are riding a pondskim anyway.

While this may already seem like a whole season’s worth of ski antics, the crew is far from done. Nowhere near ready to give up, future plans include an extended mission to Yellowstone’s Beartooth Pass for Leeper and coaching summer camps in Oregon for Durstchi.

The spirit lives on.