The Bent Chetler introduces a hull-shaped tip and tail, along with a longer length and skinnier waist, for 2015.

Atomic skier Chris Benchetler’s pro model ski, the Bent Chetler, has grown into cult status over the past four years as one of the legendary twin-tip powder shapes along the likes of the Line Mr. Pollard’s Opus, the K2 Hellbent, and the Moment Bibby Pro; freewheeling freestyle-oriented powder platforms that have been refined over time to combine performance with the singular style of the skiers behind the design. With rocker now nearly commonplace, ski design has searched elsewhere for its next technological progression, and bottom contour, another surf-inspired design, has begun to be investigated for its possibility in improving soft-snow performance. The thought is that by designing all or parts of a ski with a base that rounds like the hull of a boat, it will improve the float in deep snow while minimizing turning resistance and edge catch. Designs have gone as extreme as the DPS Spoon and the Surface LAB 001, a fully-rockered powder ski with a convex base from tip to tail.

Chris Benchetler, like almost all skiers and snowboarders, really wishes he was a surfer, and his extensive time in the water in places like Nicaragua, Oregon, and whichever part of the California coast he can hit fastest from his home in Mammoth tempted him to draw on this technology for his pro model ski, so the big news for the 2015 Bent Chetler is "HRZN Tech," which adds horizontal rocker across the base of the rockered and tapered tip and tail by bending back the sidewall. “HRZN Tech adds 10% more surface area in the tip and tail without increasing swing weight,” proudly proclaims Atomic’s marketing material, adding as well that the hulled-out shape of the tip and tail which have no metal edge, will not only increase the float in powder, but also produce “better tracking through chop and crud, and less tip deflection – meaning increased stability, floatation and agility.” Chris says you can also look forward to a longer ski with a skinnier waist, and as you can tell, slightly less hysterical graphics than years past. 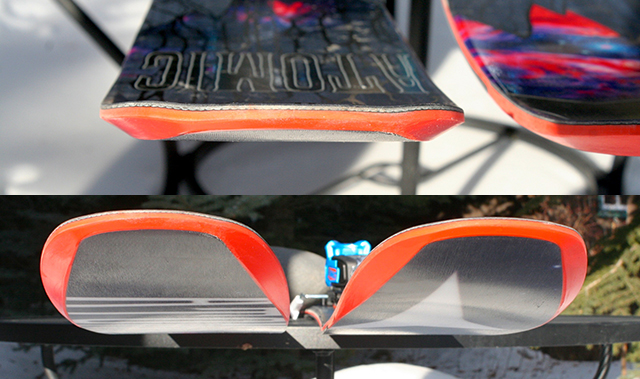 View of the new HRZN Tech horizontal rocker across the base of the tip and tail, made entirely out of ABS sidewall.

Obviously the most notable design change for this upcoming year in the hull-like shape at the tip and tail. We'd expect this was influenced from your years experimenting with surfboards, where bottom contour is a critical design factor. Can you explain what your thought process was behind hulling out the tip and tail, and where you think this will increase the performance of the ski?

"You guessed it - it was very surf influenced. We are calling it 'HRZN tech.' It has been in the works for a while now. It was inspired from a surf board that I saw Rob Machado had shaped. He took a standard short board thruster, and basically put a fish shape on top of it to allow for the best of both worlds…  So my hope was to make powder ski that did all the things I love to try, and make just standard pow skiing that much easier and more enjoyable. The HRZN Tech essentially allows the ski to move effortlessly across the fall line, through chop, and schmear turns all while remaining in control. We narrowed the waist by 3mm, and brought the length from 183cm to 185cm and I can happily say it has far exceeded my expectations…" 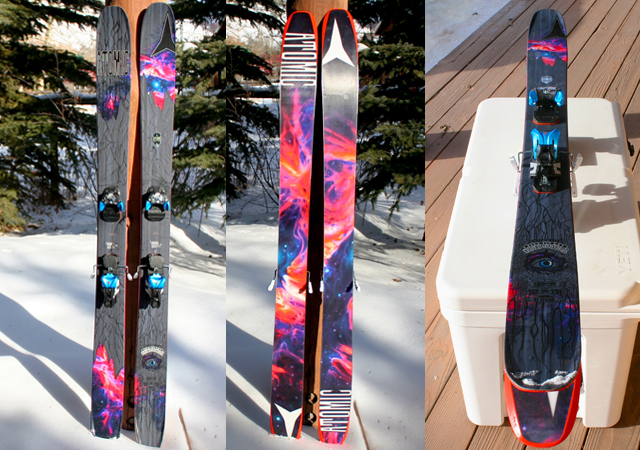 What was the thought process behind building the walls of the hull out of sidewall, instead of curving the entire base of the ski like the Surface LAB?

"There were a lot of reasons. For one, both Atomic and I wanted the ski to still be able to receive a base grind and be worked on without losing any of the skis integrity or design. Secondly, we optimized the location of the HRZN tech to only the tapered areas of the tip and tails, so there is no washing out or lack of control in the chop, mixed snow, heavy pow, etc…  The ski should effectively have more control due to the skis ability to deflect less and track better."

Besides the horizontally-rockered tip and tail, how has the ski changed for this upcoming season, and what have been the overall changes in design over the years since your first version of the Bent Chetler?

"There are a lot of changes beyond the HRZN tech since the last generation. We narrowed the waist, lengthened the ski, put a new construction of lightweight polar, added Atomic’s new Step Down sidewall 2.0, etc. The previous generations since year one had slight adjustments to enhance performance year after year. The earlier changes were with flex. Then we moved to lighter materials. Then we moved to the SPB's (carbon stringers) in the tip and tail to help stabilize the chatter in the rocker areas, etc."

This ski has been around for awhile. For loyal Bent Chetler skiers, how will their skiing change on next year's iteration? 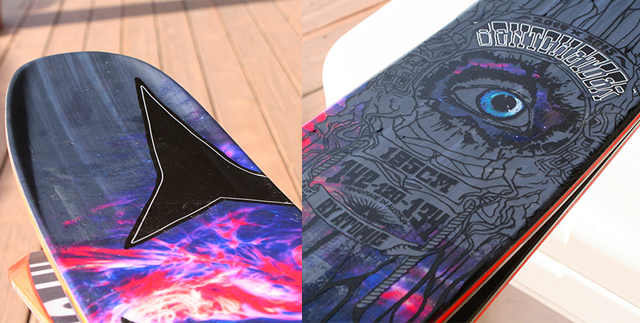 The Bent Chetler in detail, this time with a notably calmed color pallete and far fewer Japanese characters.

These seem to be the quietest Bent Chetler graphics ever. Are you calming down your color palette with age?

Ha. Not entirely, but yes at the same time. There is still a lot of detail, its just very much on the tonal side to separate it a bit from the years past. Atomic recommended we make a departure to really allow for it to stand out, and since my previous years were standing out in the other direction we landed on a tonal graphic. I'm really stoked on it!

The newly-hulled, lengthened, and thinned Bent Chetler will be available in shops next fall. In the meantime, we look back on Chris and the years of nosebutters and pow surfing on his signature ski. For more information on the Bent Chetler, check out Atomic's website, and look forward to early testing feedback on the 2015 Bent Chetler from the TGR staff soon.

We all know that in mountain towns this past year, “working from home” often meant “shredding with your phone and taking calls from the chairlift.” We’re not sure what Kai Jones’s boss would think of this indisputable proof of playing hooky, but it sounds like he still made his 4 p.m. meeting, so all is probably well. And come on, with tricks like those, he might as well be employee of the month!

TGR Legend Kent Kreitler is on the Powell Movement

TGR Legend Kent Kreitler is on the Powell Movement

TGR Hall of Fame athlete Kent Kreitler is a living legend. He’ll be remembered as the skier who first helped bring tricks to the backcountry, but he is so much more than that. He was part of an elite crew of skiers that pioneered big mountain skiing in Alaska…the generation that lived fast and took chances. Just a few years ago, he was inducted in the TGR Hall of Fame for his many parts in films over the years. In part one of his podcast on the Powell Movement, Mike Powell talks with