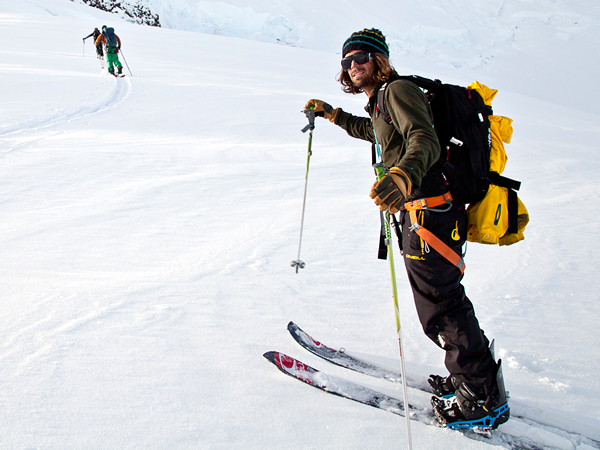 (Washington, D.C.) - Warning that “winter is in trouble,” 75 Olympic medalists and other winter sports athletes – including White House “Champion of Change” awardee and pro snowboarder Jeremy Jones – are sending a letter to President Obama today urging the President to take action on climate and clean energy.

The representatives of the global snow sports community signing the letter include X Games champions and World Champion snowboarders, alpine/Nordic skiers and professional climbers, including:

For a full list of signers, go to protectourwinters.org/athleteletter.

“Without a doubt, winter is in trouble,” the letter states. “… at risk are the economies of tourist-dependent states where winter tourism generates $12.2 billion in revenue annually, supports 212,000 jobs and $7 billion in salaries.  Those are the jobs and businesses owned by our friends and families, generators of billions in federal and state income.”

Jones is being honored on April 11 at a White House ceremony along with other “Champions of Change,” in recognition of “ordinary Americans doing extraordinary things in their communities to out-innovate, out-educate, and out-build the rest of the world.”

Jones is being recognized for his contribution to raising awareness about the impact of climate change on the winter sports industry by creating Protect Our Winters (POW), a foundation established in 2007 to unite and mobilize the global winter sports community against climate change.

“This nomination is an absolute honor for me and the work we're doing at POW.  But it's now my responsibility to take this recognition and help secure a place in the climate discussions in Washington. The letter that's been enthusiastically signed by so many amazing athletes is a strong showing of solidarity from the leaders in snow sports on climate action, so together, we have to keep that momentum going,” Jones said.

The letter to the president references a December 2012 report published by Protect Our Winters and the Natural Resources Defense Council highlighting the economic impact of inconsistent winters on the U.S. snow sports community and tourism-dependent states.  (See protectourwinters.org/climate_report/.)

The athletes’ letter calls on Obama to follow through on the promise he made in the State of the Union address to fight climate change. He can do so by using executive authority currently available to reduce carbon pollution emitted by America’s power plants, the largest source of carbon pollution worsening climate change, and by rejecting the Keystone XL pipeline, which would add millions of tons of new carbon pollution to the atmosphere.

“Mr. President, it’s time to force our transition to clean energy, and we need your leadership,” the letter states. “…on behalf of 23 million of us who love winter and depend on it for our economic livelihoods, please take the action on climate change you have promised.”

The full text of the letter follows:

During the recent State of the Union address, you urged Congress to “get together, pursue a bipartisan market-based solution to climate change...but if Congress won't act soon to protect future generations, I will.“

As professional athletes, representing a community of 23 million winter sports enthusiasts, we’re witnessing climate change first-hand. Last year was the warmest year on record, and once again, we’re currently experiencing another winter season of inconsistent snow and questionable extremes. Without a doubt, winter is in trouble.

And with this lack of consistent snow, at risk are the economies of tourist-dependent states where winter tourism generates $12.2 billion in revenue annually, supports 212,000 jobs and $7 billion in salaries. Those are the jobs and businesses owned by our friends and families, generators of billions in federal and state income.

The good news is that because we know this warming is human-caused, we can do something about it and it can be done, now, from limiting carbon pollution from our nation's dirty power plants to rejecting the Keystone XL tar sands pipeline.

First, it is time to tackle pollution from the biggest emitters in the United States: power plants. We’re asking for you to issue standards under the Clean Air Act that cut carbon pollution from America’s aging power plant fleet - at least 25 percent by 2020, while boosting energy efficiency and shifting to clean energy sources. Power plants are our largest source of carbon pollution. Cleaning them up will create tens of thousands of clean energy jobs, meet the pollution targets set for the country, and restore U.S. international leadership.

Furthermore, we urge you to reject dirty fuels like tar sands. Specifically, reject the Keystone XL tar sands pipeline, which is not in our national interest because it would unlock vast amounts of additional carbon that we can’t afford to burn, extend our dangerous addiction to fossil fuels, endanger health and safety, and put critical water resources at risk.

Mr. President, it’s time to force our transition to clean energy, these are the first big steps and we need your leadership.

Again, on behalf of 23 million of us who love winter and depend on it for our economic livelihoods, please take the action on climate change you have promised.