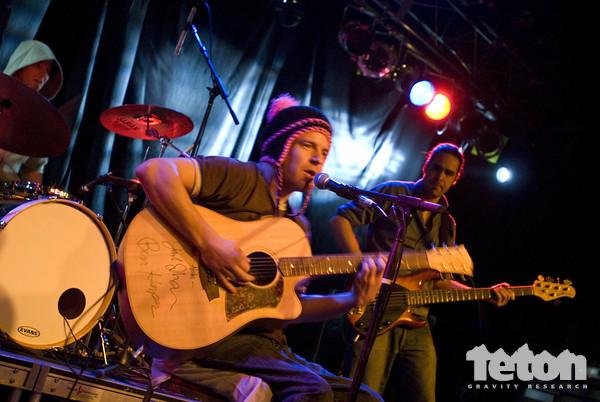 Marc Andre Belliveau is making popcorn in Quebec’s Chic Choc Mountains, speaking to passers-by and juggling the phone at the same time.  It’s almost the end of the ski day, but he wasn’t out skiing. His sit-ski, he explains, is being repaired.

In the meantime, Belliveau has been keeping busy working, playing his guitar, writing music, and getting it done: He recently released a 5 song EP titled "Sideshow" that is now available on iTunes and Amazon.com. We caught up with him to chat, find out what he uses for inspiration, musical goals, and what he thinks of the new direction of sit-skiing.

Teton Gravity Research: How long did you work on the songs on your new EP?

Marc Andre Belliveau: For the last four or five years I have been writing the songs for that album. I started recording these five songs for 2 or 3 months, in Quebec with my good friend, a guitarist.  I do still have about 10-15 more songs I want to record. I want to make a whole album.

TGR: Where do you plan on taking your music?

MAB: I am still working on signing with a record company, but I kind of like the way I am doing it myself now. But it is hard to reach people this way.  It is just like one friend telling another friend, and then they buy the songs.  So – I’d like some help with promotion, and so if I get a deal that’d be nice.

TGR: What is the inspiration for the songs?

MAB: Inspiration is pretty simple, it is just day to day. Sometimes I sing about my accident but not always. Sometimes I just throw some shit out there and see what happens.  My songs are pretty personal, I think people won’t be interested, but then I find they can relate.

TGR: What happened to your sit-ski?

MAB: I tried to modify it, and it didn’t work.  So this year one of my friends, who is a good metal worker, modified it for me.  We put in a motocross shock and changed the whole suspension system.  I hope it is going to work!

MAB: Well, the last year I went shooting with TGR, I hurt myself.  I had a big tomahawk off a cliff. The sit-ski could not handle that much speed and bump, so that is why I have been modifying it. It is going to be back here this week, so I’m pretty excited.

TGR: What do you think about Josh Dueck and the first ever backflip on a sit-ski?

MAB: I’m pretty impressed by Josh Dueck. He came to visit me in the hospital when I got hurt; he was hurt one year before me. He was so good already on his sit-ski, and jumping the biggest jumps in the park. I’m not surprised — I’m so impressed. He’s definitely a big inspiration. I’d like to get to that level, but for now I’d just like to get back on a good machine.

TGR: What else is going on? How’s the rest of life?

MAB: Right now I’m working at the ChicChac [a hostel that provides snowmobile-skiing and catskiing] in eastern Canada, by the Chic Choc Mountains.  My brother — he is a forester here — talked to me about this place; I feel right at home here. There is a big freeskiing community, and I like the way people are promoting freeskiing here. I never would have thought I’d be stoked on here, but it’s really good. It doesn’t beat out West, but it is pretty legit.