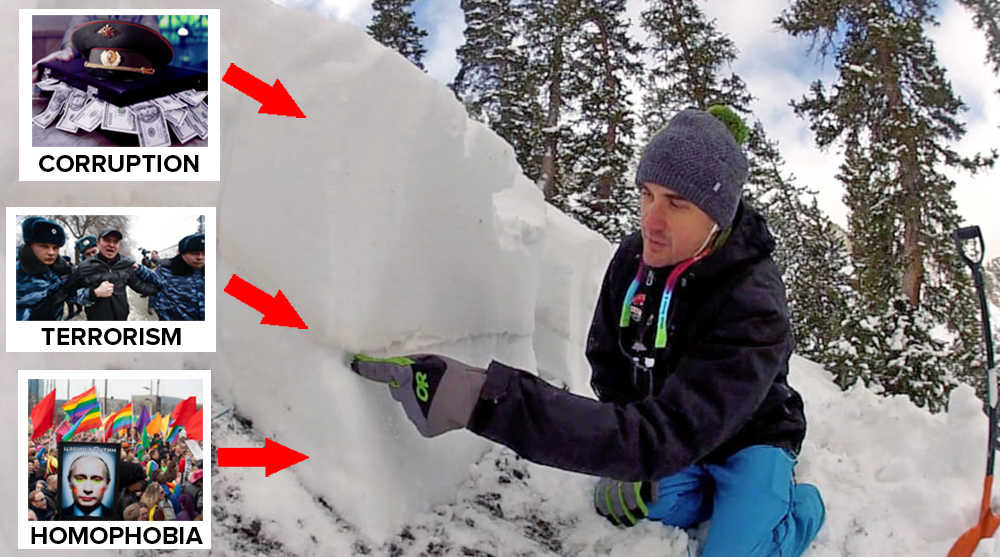 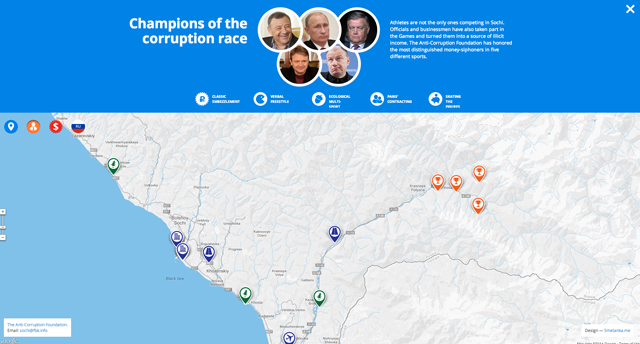 Description: Persistent corruption, a result of ongoing cronyism and autocracy overlying a thin early-season weak layer of democracy and free speech, is currently affecting all aspects and elevations of the Sochi Olympic venues.

The budget for Sochi picked up currency content and ballooned after an early high-pressure system, with KGB cronyism fueling a budget growth from $12 billion to over $51 billion. This system originated in the greater Moscow area, sucked up vast amounts of taxpayer money, and redistributed the compounded cash to the pockets of various government officials and construction contractors.

This persistent layer has the potential to render billions of public money wasted while rendering tap water in the Sochi area undrinkable and accommodations unfinished or double-booked. The likelihood of triggering this weak layer is increased by being a nosy journalist, with the potential for victims to be carried away in an avalanche of security forces and ending up six feet under.

Please refer to the map above to understand individual pockets of persistent corruption.  An area particularly sensitive to triggers is the road from downtown Sochi to the ski areas, which cost almost as much as the entire Vancouver Olympics.

Aspect/Elevation: Concentrated at the low elevations below the rain line in the metropolitan Sochi area—because who the hell would bother bombing a ski area?
Likelihood: Possible
Size: Large
Trend:Increasing

Description: Terrorism was a pre-season concern for these Olympics, given the persistent terrorist cells who want Putin dead and whose population base sits on the shaded aspects of the Sochi venues. Two human-triggered events earlier this season in Vologograd confirmed the shear strength of the layer, and officials have begun extensive control work—even by Russian standards. 40,000 security officials are performing control work on all aspects and elevations. This represents a far more extensive staff than the measly 13,000 that America sent to guard the Salt Lake Olympics immediately after 9/11. Concerns about this persistent weak layer spiked Friday morning after a Ukrainian plane was hijacked on its way to Turkey and an attempt was made to steer the plane towards Sochi. Turkish F-16s performed control work and brought the plane to the ground.

Aspect/Elevations: All aspects and elevations, with a particular hot spot in the figure skating venue
Likelihood: Possible
Size: Large
Trend:Decreasing

Description: Extensive control work on free speech and progressive thought in Russia has led to rampant homophobia in the general snowpack. Victims of this weak layer can expect domestic control work to ignore basic rights for homosexuals and encourage hate crimes. However, control work by the international community has resulted in a decreased likelihood of triggering this weak layer, although persistent homophobia still exists deep in the snowpack.

Broad-based ignorance is also persistent in the International Olympic Committee layer of the snowpack, which has recently banned stickers on Olympic athletes memorializing the impact of legendary pipe skier and half the reason ski pipe is in the Olympics in the first place, Sarah Burke.