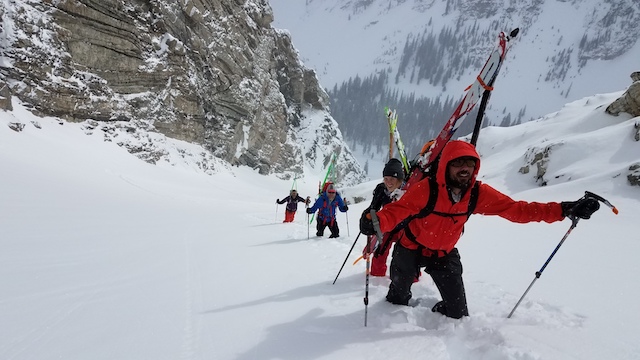 It's easy to smile through grueling bootpacks when you know you're returning to a camp with all the trappings. Exum Mountain Guides photo.

It was early October and winter was just starting to prick the back of my mind when an email dropped into my inbox inviting me to join Exum Mountain Guides for their first-ever Moran Club.

The Moran Club was a meeting of the Moran Camp veterans to go deeper, further and longer into the Grand Teton National Park backcountry. While mildly intimidated at the thought of four nights camping in the midst of a cold Teton winter, there was little hesitation at jumping at the opportunity.

Details trickled in over the next few months: don’t forget down booties; we will be skinning approximately 12 miles in; you’re going to want down pants (side note: Hey, outerwear brands, can someone please make a decent pair of women’s down pants?).

February 23rd approached and I started to think, “What the hell did I get myself into?” I’m a novice winter camper and I had yet to even ski in Grand Teton National Park that season. Not to mention the trip was seven dudes and me, the solo female.

Saying I was nervous is an understatement as my mind raced from freezing to death to questioning my ability to ski multiple 12,000-foot objectives day-after-day for four days. Was I even capable of keeping up with seven guys, one of which had skied the Grand Teton the prior week? My confidence wasn’t exactly soaring.

I packed an extra layer, put on my big-girl (puffy) pants and triple checked that I had extra, extra, extra snacks.

The 12-mile skin from Bradley-Taggart Lake to Leigh Canyon was a lot easier than expected–especially after watching the two Exum porters load two sleds each with an expedition tent, rib-eye steaks, a two burner propane stove and a massive propane tank. From there it was just walking and as our guide, Tim Cohn, would say, “Humans were made for walking.” 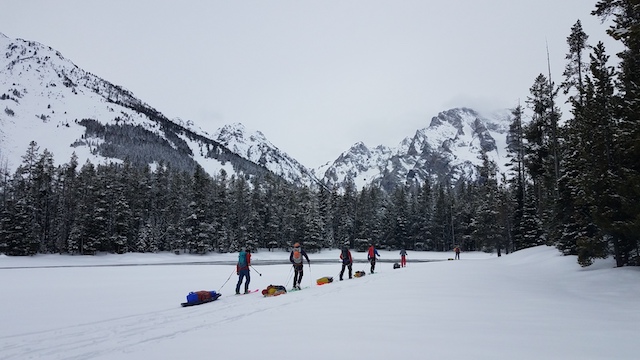 Sure, hauling a sled for 11 miles in the freezing cold sucks, but just think about all the untouched snow. Exum Mountain Guides photo.

Base camp was like a small tent village with one large mess-tent. The mess-tent, designed and constructed by guides Brenton Regan and Adam Fabrikant, was a winter camping haven. The floor was dug down about 4 feet with benches lining the circumference and a big round snow-table in the middle. This would be our main shelter for warmth (outside of our -20 degree rated sleeping bags). If it wasn’t quite warm enough we would justify keeping the stove on because we obviously all needed more hot water.

While for many, winter camping is an experience of only the necessities, Exum doesn’t believe in that and brought all of the comforts to Leigh Canyon. Our group indulged in appetizers, main courses and dessert every night along with after-dinner tea and Bulleit Whiskey for all. They even went as far as making ribeye steaks on the last night, a well-deserved delicacy.

That being said, we were still winter camping and it was still cold as shit. No, there was no heater in our tents and yes, we still hauled our sleds 12 miles in the bitter cold. The payoff was just a luxurious winter camp and some beautiful some remote skiing in the middle of February.

On the approach day to base camp a few of us still had a little gitty-up-and-go and decided for a short tour up the East face of Mt. Woodring. A short 1,000 feet later and I was feeling mildly “kicked-in,” but still well worth the hip flexor agony for the treed powder skiing directly back down into base camp.

After a weather check and a guides meeting that evening we had two objectives in mind for the next day: The Fallopian Tube, a 2,400-foot couloir off the north side of Mt. Woodring and the Southwest couloir on Mt. Moran.

Breaking into two teams the next morning, one team of five headed for the Fallopian Tube and the other team of set out for the Southwest.

I was part of the Fallopian Tube team. Being cautious of the snow conditions we transitioned from booting to skinning a handful of times (try the ‘Houdini Trick,’ when faced with lots of transitions) approaching from the South side of Woodring in Paintbrush Canyon. Arriving at our destination and peering into the shaded tube we knew we were in for a treat. 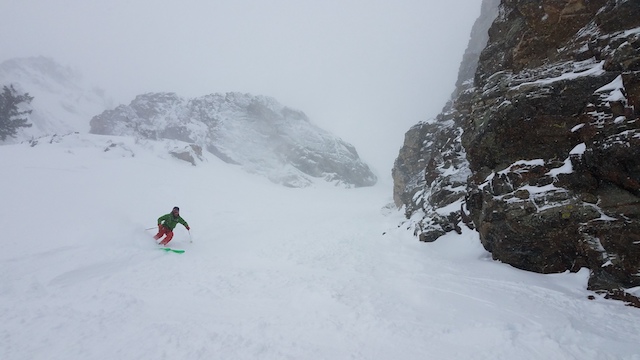 Conditions were stables and the snow was deep. Time to let ‘em rip. We skied the 2,400-feet in two sections, the last one being one of the bigger leg-burners I have ever experienced. Sweating and breathing heavy I came to a halt at the bottom of the walled-couloir high-fiving the guys.

Seconds later we heard Adam come over the radio from the Southwest Couloir saying they were just about to drop in. Looking across Leigh Canyon we watched three pin-sized dots wind their way down Mt. Moran.

The band was back together and on fire with excitement.

As we arrived back at basecamp I had an overwhelming feeling of accomplishment followed by gut-wrenching nerves. Tomorrow was another day and the objectives in Leigh Canyon only get bigger. Maybe it was my hunger speaking but could I climb to 11,000-feet or more again the next day?

After a delicious dinner and a few shots of Bulleit, the guides dropped a bomb on us: We had a window to ski the Hidden Couloir on Thor. Due to this couloir having a mandatory rappel they hand selected the individuals that they felt were suited for the objective.

“Thank God,” I thought to myself, “I won’t even have to make the decision if I want to do this.”

Unfortunately, I had no such luck: The guides informed me they’d like for me to join them. My jaw fell to my lap. I had heard of the Hidden Couloir before–it was a dream line–but I never expected to get the opportunity to ski it.

Waking up at 4:00 a.m to subzero temperatures, I questioned my decision. Shortly thereafter, I told myself to suck it up. Following a brief, dark skin up Leigh Canyon to the North side of Thor our team transitioned to crampons. The bootpack from there was more of a chest deep wallow and somehow our entire group was still wearing all our layers. 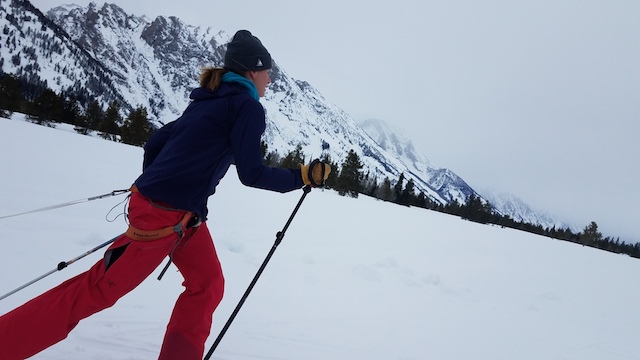 The wind was whipping at our faces, only our eyes visible. The first 45 minutes of climbing went smoothly, but then we found ourselves navigating around touchy conditions. The wind was creating wind slabs and cautiously avoiding starting points was becoming increasingly difficult with every step.

At about 10,600 feet we decided it was time to turn around. Conditions were worsening and the wind wasn’t letting up, but hey the 3,000 feet of climbing we had just done was going to be amazing skiing. Live to ski another day, and hey, how wonderful did hot tea back at camp sound?

The weather continued through the night and into the next day making the decision to go powder skiing instead of couloir hunting the only logical answer. But, who’s to complain when you’re skiing untracked snow in the North Tetons in February?

I had always been one of “those people” that would hear friends chat about winter camping and shiver and while I did my fair share of shivering, if someone asked me to go back out tomorrow, I would. I’d experienced Type 2 fun before, but this was a whole different ball game.

We’ll be back Thor.