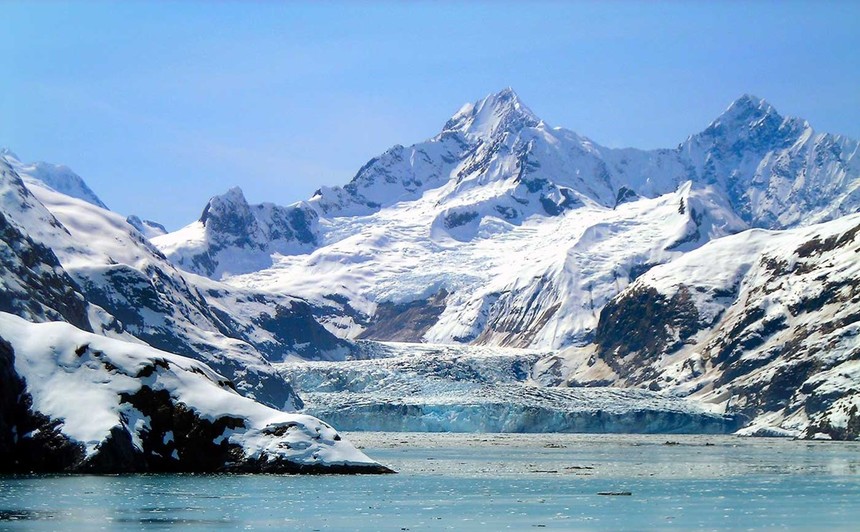 A recent NOAA blog post has confirmed what climate enthusiasts have been suspecting for months: The El Niño of 2019 is officially over. Brushing over the complex analysis which led to that conclusion, we'll take a look at what that means for the North American winter sports community.

In short, El Niño means that there is more energy in the central and eastern Pacific Ocean, which translates to more moisture coming off the ocean. The moisture moves east before falling in the form of above-average snowfall in the Cascades, Sierras, Rockies, and other ranges in the Southern and Western United States.

So, it's a bummer that El Niño is over, but there are two major caveats: Firstly, it's not unheard-of for El Niño conditions to disappear during spring and summer and then re-emerge during the fall. In fact, forecasters think there's about a 30% chance of El Niño returning this fall, compared to a 50-55% chance of an ENSO-neutral winter.

This brings us to our second caveat: An ENSO-neutral winter (winter without El Niño or La Niña) isn't necessarily a dry and boring winter. There are many other factors which combine to create the climatic conditions which we, skiers and snowboarders, would call "good" or "bad" winters. Just because El Niño seems to be over doesn't mean that you should cancel that mid-February trip to Snowbird. 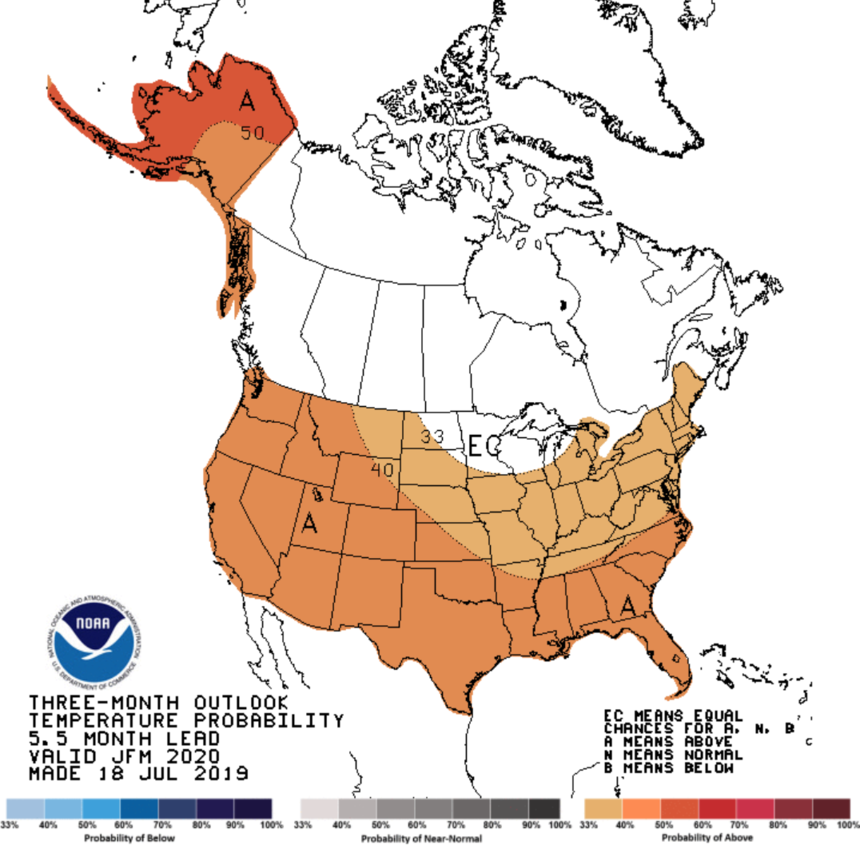 NOAA is predicting a warm winter in Alaska. NOAA graphic.

Now we come to the second piece of NOAA's forecast: Temperature and precipitation. The above map is NOAA's current forecast for regional temperatures during the months of January, February, and March 2020 relative to normal. The vast majority of the lower-48 is predicted to see higher-than-normal temperatures during those months, as is Alaska. 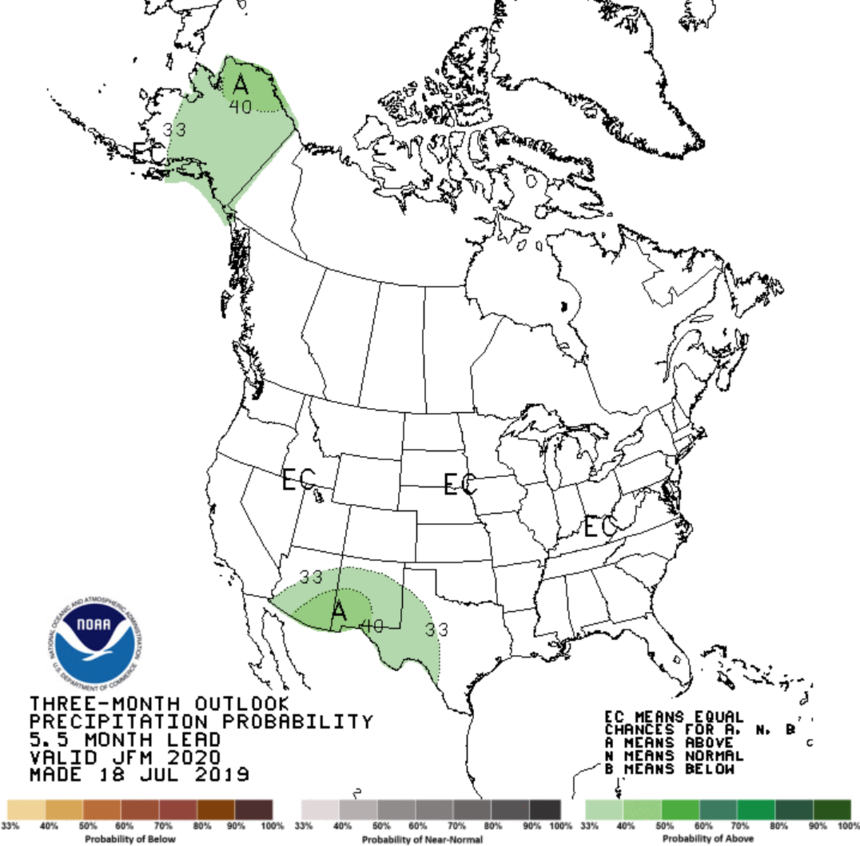 NOAA is playing it close to the vest on precipitation. NOAA graphic.

Unless you live in Arizona, New Mexico, Texas, or Alaska, NOAA doesn't have much to say about the precipitation levels you can expect in January, February, and March 2020. The notation "EC" means that there is an equal chance of average, below-average, and above-average precipitation during that period. So, it's not great news, but it's not awful news either. As is always the case with long-range climate forecasting, there is very little certainty assigned to these predictions, so we'll just have to wait, hope, and see what happens.

I used that Arizona where I live and my neighbor states has already started warning up near 70s Phoenix in 80s now we only had few days of freezing cold now warmed up significantly and rapidly near 70 next week no rain no snow nothing forecasted for us till maybe summer of 2020 we might get rain again or what. But Flagstaff is very warm like bv spring summer like heat I expect no winter this year for Flagstaff area other states too same snow will stay up in northern tier into Canada Eastern u.s. will be below normal colder temperatures there snow there so it’s too bad that calif and Arizona will see lots of fires due to heat here this year and 2020 we expect it to get worse

Two weeks ago a Japanese cargo ship hit a reef off the coastline of Mauritius and subsequently leaked 1,000 metric tons of oil into the island’s delicate marine ecosystem. Right now this spill has released more oil than the combined total of every oil tanker spill of 2019. Unfortunately, things are expected to get much worse. The crack in the hull’s ship—the original culprit for the spill—is expected to worsen and release the remaining 1,800 metric tons of fuel, oil, and diesel on board.