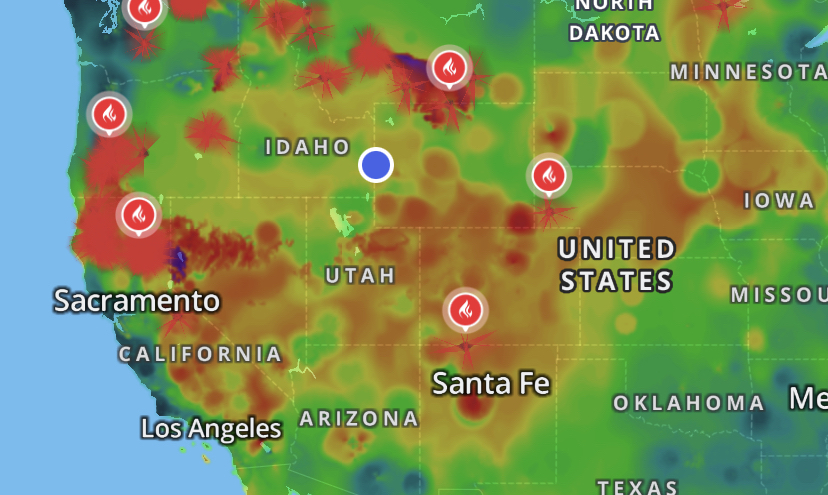 There are currently 107 wildfires burning nationwide, with large ones in California blanketing Nevada, Utah, and Colorado with dense and unhealthy smoke. | Breezometer map.

This past weekend felt pretty apocalyptic across the West, with skies turning orange, ash depositing on surfaces, and air quality indexes so bad that many of us were warned to avoid going outside. In fact, Denver and Salt Lake City were both ranked at the top of the list of worldwide air pollution. Here in Jackson Hole, we’ve spent more than a quarter of the last 30 days well above the WHO’s guideline of daily exposure (25µg/m^3). The cause? Smoke from wildfires raging in California. Currently, the Dixie wildfire east of Chico, California, is nearing 500,000 acres and sending smoke billowing across the western half of the United States. The fire has been burning for nearly a month, and is being fueled by the intense drought. It is now the second largest fire in the history of California. Entire communities have yet again been burned to the ground, displacing thousands of residents and leaving them with nothing. There are 10 other fires burning in California, and 107 nationwide, not including those burning just across the border in Canada. Oh yeah, and the United Nations just issued their latest climate report, blatantly stating that nations have waited too long to curb their fossil fuel emissions to prevent intensifying climate change.  For up-to-date smoke and air quality information, check out Breezometer.

Get the scramble words which will be unlimited and will make playing this game much simpler one.

There are many strategies you can use for teaching. Understanding these strategies is one of the best ways to improve your own effectiveness as a teacher. The essayshark reviews also talk about these sessions in depth.

Well he was best, we have worked on eq webmail login project and he done what he is known for best

This is a major problem here in the US - We are in Brentwood Ca and we are always worried about fire -
https://www.colinthecontractor.com

Understanding these strategies is one of the best ways to improve your own effectiveness as a teacher. This article is interesting for me, thanks for sharing.