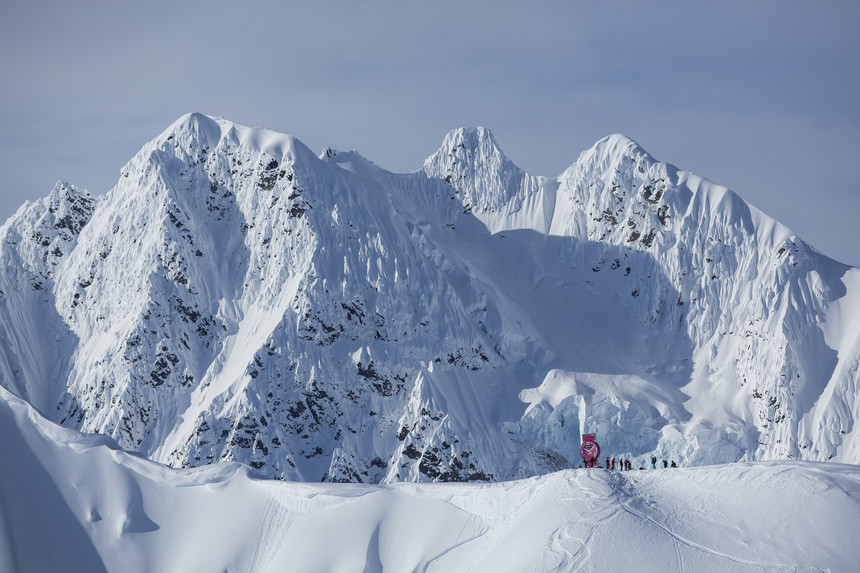 After several days of stormy weather and sketchy avalanche conditions, the FWT held its second-to-last stop of the year in Haines, Alaska, in perfect powder.

This marked the final chance for athletes to qualify for the finals, that will be held in Verbier, Switzerland in two weeks.

Conditions on the 2,500-foot face were nothing short of ridiculously good, even the last riders to drop still got faceshots the whole way down.

The men’s snowboarders dropped first, and USA’s Ryland Bell immediately took advantage of the virgin face, spraying and slashing down and stomping a few spins down his line. Sammy Luebke ultimately beat his score, with even bigger airs and one of the smoothest 360’s of the year.

Frenchman Loïc Collomb-Patton was the first men’s skier to drop. He threw down a heavy run littered with huge airs and spins. His fellow countryman Léo Slemett followed a similar line but was unable to beat his score. Patton’s score stayed on top, putting him and Slemett in an unprecedented three-way tie with Kristofer Turdell for the overall standings.

The women’s snowboarders dropped next, with USA’s Shannan Yates edging out France’s Marion Haerty for the win. From Yates: “I am ecstatic! This is such a beautiful day. There were a lot of questions about the weather and what would actually happen; we had the fog and the waiting game and the snow was so so fantastic! I skied my line where I was planning on going. I may not have done it as smooth as I would have liked, but I had fun.”

Lastly, the women’s skiers dropped, and we were treated to a show by Italy’s Arianna Tricomi, who beat out stellar runs by Austrians Lorraine Huber and Eva Walkner.

Final rankings can be found here.

This season’s FWT finals are schedule for April 1-9 in Verbier, Switzerland.

I like the valuable info you provide to your articles. I will bookmark your blog and check again here regularly. I’m somewhat certain I will be told many new stuff proper right here. Thanks! http://www.juegosfriv2018.live/