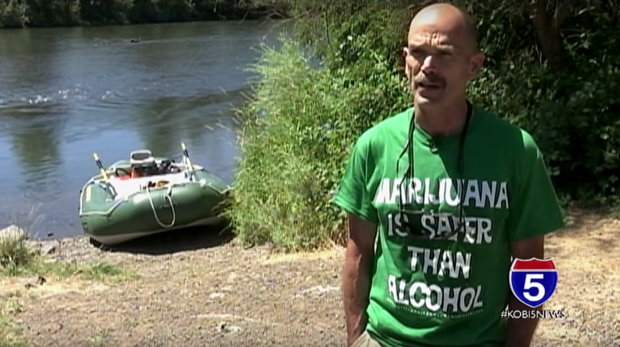 Mike Boutin stands in front of one of Weed Country Adventures' boats on the Rogue River in Southern Oregon. KOBI screen grab.

GOLD HILL, Ore. — For some river enthusiasts, whitewater rafting and smoking A-grade cannabis has historically been a great combination. But almost always, it’s been an illegal one.

However, according to KOBI-TV, beginning earlier this summer, Southern Oregon’s Weed Country Adventures changed all that by offering fully legal marijuana-themed rafting trips on the Wild and Scenic Rogue River. Providing some of the dankest crops from the region to their clients during a fun day on the river, WCA is looking to pave the way for other marijuana tourism businesses as states enact their own legalization laws.

Weed Country Adventures founder and owner Mike Boutin is excited and optimistic about the future, but he also maintains that the business of offering cannabis on the Rogue still dwells in a grey area that must be treaded carefully.

“We’re sort of pioneering something here,” Boutin said. “I did get a call from a Captain at the Sherif’s department, we had a very good conversation, and I believe we’re exactly on the same page about what the legalities are, what my responsibilities are, in terms of how we conduct ourselves.”

We’re not going to use it openly.

Rules dictate that cannabis cannot be smoked on the river and anyone who is intoxicated cannot be involved in paddling the raft. Guides and shuttle drivers do not partake.

Instead of toking on the river, planned smoke stops take place on private property out of view of the public.