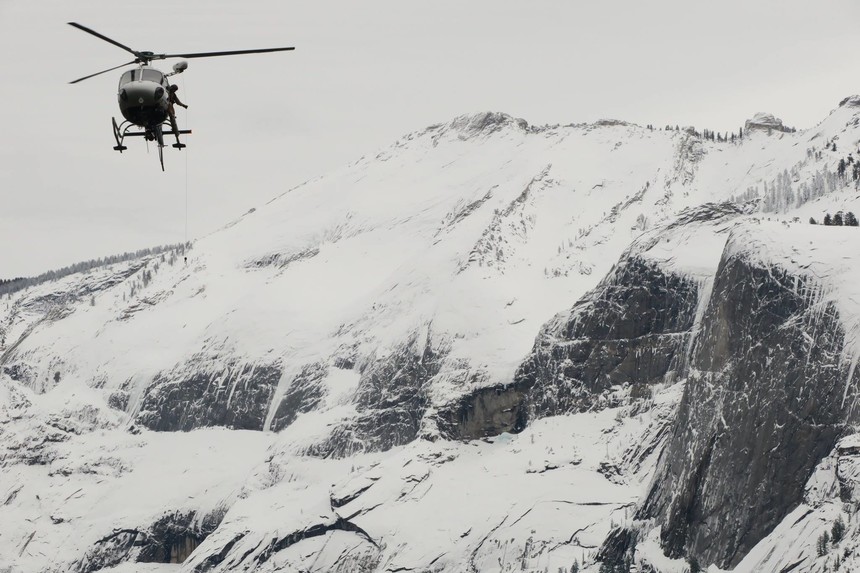 A helicopter lowering a line to rescuers in the ground in the Yosemite rescue. Josh Helling Facebook photo.

Two British hikers were rescued in extremely steep terrain in Yosemite early Wednesday morning, just as heavy snowfall was materializing. According to rescue reports, the two hiked up the Yosemite Falls trail, planned to descend the Snow Creek Trail, but got lost around snowline and accidentally started descending a steep dead-end gully as darkness fell.

Luckily, they were able to place a 911 call, and Yosemite Search and Rescue was dispatched to their GPS location. Due to the complicated terrain, the rescuers were unable to find them until the next morning, and the two hikers were forced to endure a night around 5000 feet in freezing rain.

The hikers were eventually reached around 5 a.m. by rescuers who rappelled into the gully from above. “They got themselves to a place that good climbers wouldn’t want to be. There was no way down from there,” one of the rescuers told Adventure Sports Network. This forced the rescuers and hikers to ascend back up over 500 feet of rope to a waiting helicopter that flew them to Ahwahnee Meadow.

The rescue was performed by a skeleton crew in place in Yosemite due to the ongoing federal government shutdown. The crew was unpaid, and it is unclear when they will receive pay for being on duty.

Thanks for such an interesting article! On our site donemlilavolta.org you can read more interesting stories and get beneficial information concerning your health.