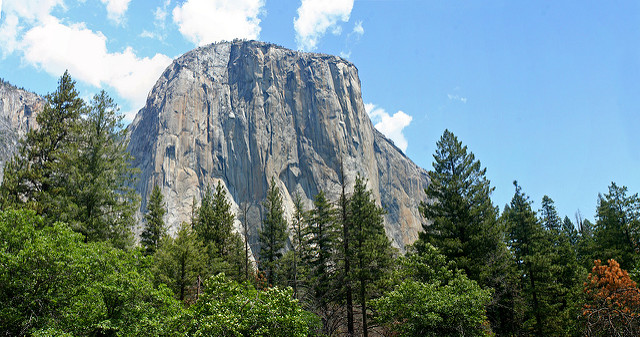 Klein had climbed El Cap at least a hundred times, Wells had also climbed it many times. Both climbers fell to their deaths this Saturday in Yosemite National Park on the famed face.  Click Farmer/Flickr Photo .

For reasons still unknown, two experienced climbers—Jason Wells and Tim Klein—fell to their deaths while climbing Yosemite’s El Capitan on Saturday, per the New York Times.

The incident has shocked the climbing community. Best friends and veteran climbers said their ascent up El Cap’s "Freeblast" route was well within their skill and experience. Wells, 46, and Klein, 42, had been climbing together since their early 20s.

“It’s safe to say they knew exactly what they were doing,” said former climber partner Stefan Griebel to the New York Times.

Well acquainted with the walls in Yosemite, they would often scale El Cap twice in one weekend. This Saturday was just supposed to be another day on the wall.

“They were not pushing the envelope,” said fellow climber and friend Brady Robinson to the Washington Post. “They weren’t going as fast as they could.”

They were even joined by an additional friend—Kevin Prince—which kept the ascent at a leisurely pace.

Then something unexplainable happened. Tethered together, Wells and Klein fell from the wall. Prince—who was on his own anchor system—was unable to see the incident as it unfolded,  leaving family members, park officials, and fellow climbers mystified to what went wrong.

The NPS received several 911 calls at 8:15 a.m. around the time of their fall. Per the report in the Washington Post, a crowd had gathered at the meadow below El Cap to watch another set of climbers attempt a record-setting climb—and it is likely some may have witnessed the two climbers plunge through binoculars.

The deaths have shaken the climbing community. While hundreds of climbing related injuries occur in Yosemite each year, a fatal accident involving someone as elite as Wells and Klein has not happened in years. According to the Washington Post, Alex Honnold–who just set a new speed record on El Cap–is reportedly reevaluating his safety margins in light of the accident.

We here at TGR want to extend our condolences to the friends, family members and climbing community that Wells and Klein left behind.