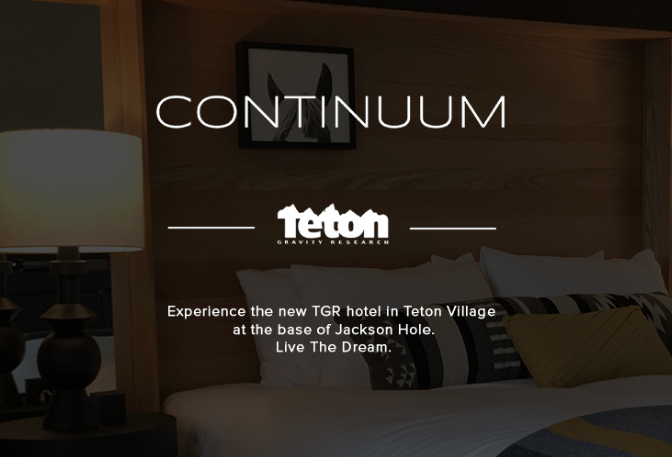 There’s been a lot of buzz circulating around the new Continuum TGR Hotel, located steps from the tram at Jackson Hole Mountain Resort. We're happy to announce the hotel is now open and you can book your stay here. We've also announced our first event, the Jackson film premiere of Fire On The Mountain with showings on Wednesday, December 11 and Thursday, December 12. Get your tickets now and join us!

While there’s still much to be revealed, we caught up with TGR co-founders Steve and Todd Jones to glean some insight.

TGR: Tell us about the vision for the property and overall experience?

SJ: We’ve always thought of TGR as a lifestyle. We’ve always believed that the idea of a TGR branded property at a place like Jackson Hole is a very natural and complementary extension of the brand- A way to deliver a deeper immersion into the TGR lifestyle including custom adventure, athlete experiences, TGR curated events, parties, and beyond.

TGR: How did it come to be?

SJ: We were looking at options in Teton Village for a TGR branded property. David and Ellie Gibson reached out to us about the idea of bringing TGR into their new property and it took off from there.

TGR: What else can we expect going forward?

TJ: It has all happened really fast and it's still evolving. We have so much cool stuff in the works that are unique to TGR and the lifestyle. Our first event is Dec. 11th and 12th. We are kicking off with the Jackson premiere of one of our latest films, Fire on the Mountain. It is a collaborative effort between TGR, Chris Bentchetler, and the Grateful Dead. Athletes from the film including Chris Bentchetler and Rob Machado will be there for a Q&A. We’ll have an art Gallery featuring Chris’ work inspired by the film. After the movie, we’ll have live music from the Deadlocks. You don’t want to miss this one.

Book a stay with us now— Rooms are available starting Friday, November 29 and join us for Chris Benchetler's Fire On The Mountain on Wednesday, December 11and Thursday, December 12.

Stay tuned for more details about upcoming events and experiences andBe sure to drop by the restaurant and bar, opening for après next week. When Benjamin Alexander clicked into a pair of skis at the age of 32 he didn’t picture himself skiing in the Olympics years later. But he was hooked after the first lesson, and five years later he’s dedicated his whole life to the sport. Now he’s hoping to become Jamaica’s first-ever Olympic alpine skier. Unlike most Olympic hopefuls—who have been on skis since they were toddlers—Alexander didn’t grow up close to a ski hill. Instead, music was his passion, leading to a successful career as an