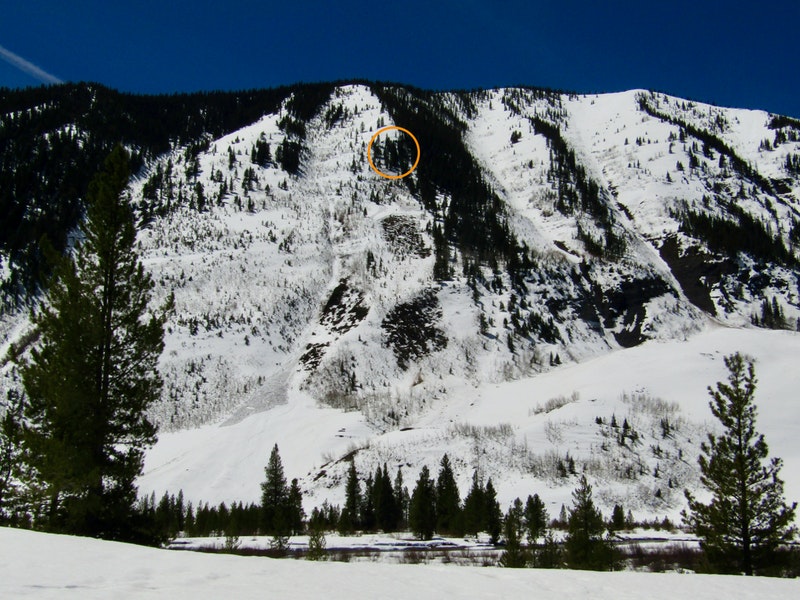 A skier triggered a large wet slab avalanche on this treed slope outside of Crested Butte. CAIC photo.

On Tuesday, a skier was caught and killed in a wet slab avalanche on Mt. Emmons, just outside of Crested Butte. The preliminary report from the Colorado Avalanche Information Center (CAIC) states that: A group of four backcountry skiers ascended Mount Emmons. Descending the northeast side through an area known as the Climax Chutes, the group triggered a shallow long-running wet-loose avalanche. The group descended a ridgeline one-at-a-time, with Skier 1 leading. Skier 1 triggered several more wet-loose avalanches, then descended out of sight down the steepening ridge. The group continued down the ridge after losing contact with Skier 1. One of the wet-loose avalanches carried Skier 1 over a cliff and triggered a deeper, and larger, wet-slab avalanche. The avalanche carried Skier 1 down a very steep, timbered slope. The group found Skier 1 unconscious and injured on the treed slope. They attempted to revive him, but his injuries were too severe. They made contact with local first responders, who assisted the group back to the trailhead. Skier 1’s body was recovered the following day.

This is Colorado’s second avalanche fatality in recent weeks, following an accident in Summit County earlier in the month. CAIC reminds any backcountry users that the extremely hot temperatures across the state have rendered the snowpack unstable and are discouraging you from recreating in the mountains. Colorado is also currently under a sharper statewide Safer-At-Home order with prohibiting any recreation further than 10 miles from home.

If you are recreating, please do so responsibly. This includes following social distancing requirements, not taking actions that risk pulling emergency service workers away from the important work they’re doing, or compromising their ability to continue that work. Learn more about the CAIC’s work during the pandemic here.

I have to thank you for the efforts you have put in writing this blog. I am hoping to check out the same high-grade blog posts from you in the future as well. https://chrome.google.com/webstore/detail/mine-sweeper/hnhdhdofcimadmhkhbfddpgjhhpokepf

I have to thank you for the efforts you have put in writing this blog. I am hoping to check out the same high-grade blog posts from you in the future as well. minesweeper online

Wonderful! Parents always want their children to be admitted in those colleges that not only provide quality education but also with proper facilities. So watermark remover is best tool to remove watermark from photo of my baby’s project.

Wonderful information! I found amazing information on the blogs I suggest everyone to follow your blog. But i have also something for you to check your cps test score.hope You like my blog and share with everyone.You may visit:https://www.openlearning.com/u/rusopelton/blog/KohiClickTestUnblocked

Rice Test isn’t tied in with testing the nature of Rice, or you should give some data on Rice. Actually, it is identified with contemplating human attributes and conduct under some particular conditions. Rice purity test is a test presented by the Rice University, Huston, Texas, United States of America. That is the reason it is named Rice purity test; in actuality, it isn’t connected with Rice by any means Rice Purity Test

I felt very happy while reading this site. This was a really very informative site for me. I really liked it. This was really a cordial post. Thanks a lot!You will be able to check on the CPS rate and the speed in which you click. You should check your click speed Test. Cause It allows you to break your unique record. More about Click Speed Test

Here 10 Tips For Increasing Traffic On Your Youtube Channel
is giving you some tips for increasing traffic on your youtube channel.They are telling you some unique tips which most succesful youtubers are also using and it is very immportanat to lerarn that tips if you have your youtube channel for getting more traffic,so you can follow that tips and become a most popular youtuber.

Here Fresher Blogger is giving you some tips for increasing traffic on your you tube channel.They are telling you some unique tips which most successful you tubers are also using and it is very important to learn that tips if you have your you tube channel for getting more traffic,so you can follow that tips and become a most popular you tuber.
<a href= “https://www.wattpad.com/912752570-ten-tips-for-increasing-traffic-of-your-youtube”> Tips For Increasing Traffic Of Your Youtube Channel </