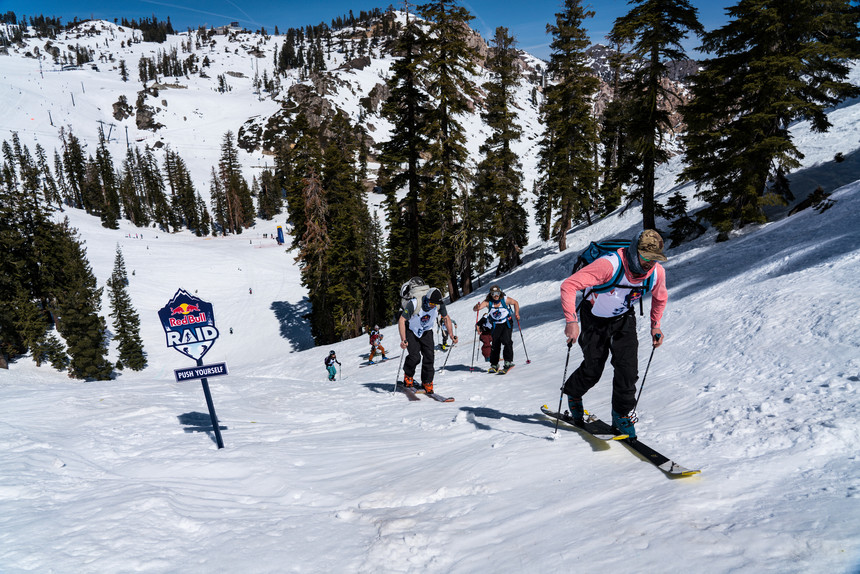 In the last few years, we’ve seen the idea of “FreeMo” gain traction in the snowsports community. Essentially it’s a blend of ski mountaineering and freeride shredding that’s become more and more fun thanks to advancements in our gear. This year especially, ski and splitboarding touring setups sold faster than PS5s, and with web series like Cody Townsend’s The Fifty Project attracting a cult following bigger than The Bachelor, it’s clear this whole foot-powered trend is going to stick around. In 2019 Red Bull took notice and launched a unique uphill endurance event called Red Bull Raid. It’s like a skimo race but with less lycra and more things to huck. The inaugural event was a hit, and after a year hiatus due to the COVID-19 pandemic, it made a comeback this year.

Last week 60 local athletes gathered at the slopes of Squaw Valley to battle it out for the Red Bull Raid 2021 title. One special thing about this year’s event is that each winner was able to donate $500 to a local business of their choice. The gesture was part of a bigger push to recognize essential workers, businesses, and passionate locals who helped make this ski season possible during such tumultuous times. All around, it was a beautiful bluebird day in the Sierra Nevada and the athletes took advantage of some dreamy spring conditions to send it big on Squaw Valley’s C2 Ridge. It was a fierce showdown, but skier Trevor Semmens, splitboarder Garrett Cygan, skier Camille Conrad, and splitboarder Jenna Shlachter ultimately walked away with the win and some serious bragging rights. We caught up with winners Semmens and Conrad to hear more about the day and their favorite moments.

Given the uncertainty of 2020 and that most events were canceled, how does it feel to have some normalcy return and to be competing again?

Camille Conrad: To be honest, this was my first competition since I quit ski racing at 14. After 21 years, it feels really good to be back in the saddle!

Trevor Semmens: It felt great to be back in the starting gate getting to compete alongside all my friends and doing what we love most. It felt really good to have that feeling of fire in my belly during a competition after not having that for the last year. 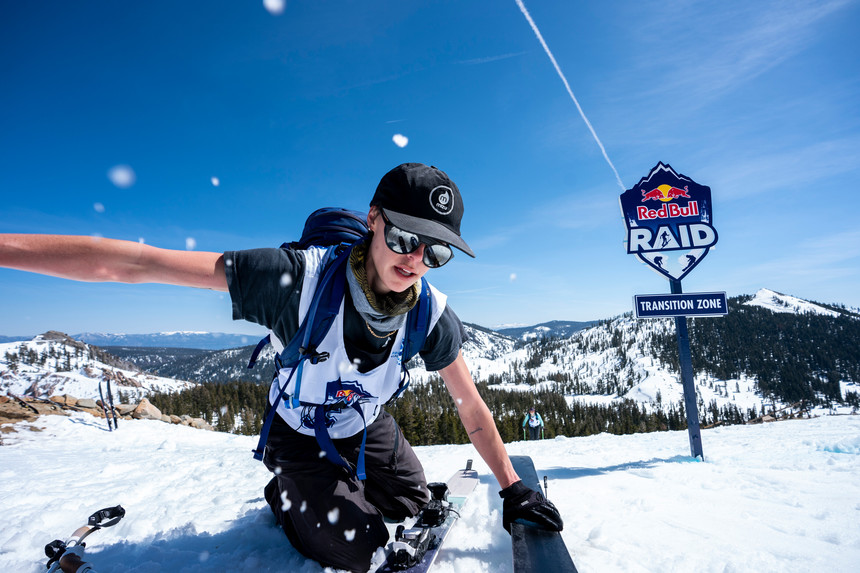 A big focus of this year’s event was about the community. How has the Lake Tahoe community come together during COVID?

CC: We made it work. I coach the U12 Far West Race Team at Squaw, and while it was challenging to adapt to the new rules and regulations, we did the best we could to continue to train and have a safe and productive season. I was impressed by my athletes’ ability to pivot, remain focused, and take it all in stride. Watching them navigate their new lifestyles with such grace and patience made it easier for me to do the same.

What do you think this event offered to the local community?

CC: I think this event offered the community a bit of a reprieve and a glimpse into a return to normalcy. With all of the cancellations and uncertainty this season, it was nice to have an event with good weather, great skiing, and some long-awaited, albeit distanced, socializing.

What drew you to compete for the first time this year?

CC: My friends encouraged me to compete. I had been toying with the idea of hopping back into the ring, and when the opportunity presented itself, I figured it was time.

TS: I was originally inspired to compete because of my dad. He was on the U.S. Mogul Team in the late ‘80s to early ‘90s and then went on to win the Pro Mogul Tour in the mid-90s. He inspired and drove me to be the competitor that I am today. 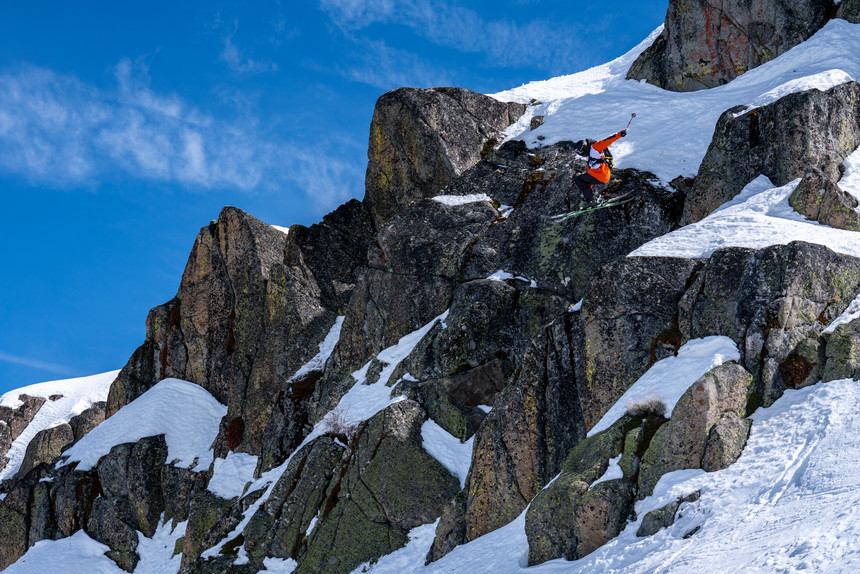 Despite weary legs from the uphill portion, athletes still sent it huge on the downhill. Red Bull Content Pool photo.

Why do you think Squaw Valley is suited to host such an event?

CC: The terrain! Squaw is such an incredible mountain, home to some of the best skiers in the world. It is truly awe-inspiring to witness the level of athleticism and skill that is displayed at this mountain on a daily basis. With the added incentive of a Red Bull event and the features that this mountain provides, it makes for the perfect venue to foster some next-level skiing.

TS: Squaw Valley is best suited to host this event because of its natural terrain. It has some of the best in-bounds terrain in the country and is perfect to host an event that involves big mountain skiing.

Given the unique challenge of competing on the uphill and downhill, how did that challenge you throughout the event?

CC: It was an advantage to have the competition at my home resort, so I had some familiarity with the terrain. Luckily I have friends who are more experienced than I who could offer input and feedback regarding my line choice.

TS: The uphill portion of the event brought out a whole new element of competition for me. The skiing was the easy part, but the uphill left me completely gassed. I was actually on the verge of passing out before my first run because I was so worked from the skin up.

How did the climb influence your overall strategy, and what kinds of things did you look for in your line?

TS: The uphill influenced my strategy by leaning on my strength which is my downhill skiing skill. I didn’t try to win the uphill, I just tried to be in the middle of the pack so that way on the way down I had enough energy to where I could ski to my full abilities. In my line, I looked for fluidity, something that I could trick off of, and a line that I could ski as fast as possible because my legs were so tired from the skin up.

What was the most challenging aspect?

CC: The ascent nearly killed me. I’d like to blame it on the icy conditions, or the fact that I was too nervous to eat anything for breakfast, but deep down I know I could be in better shape. I will focus my efforts on more skinning and less peanut butter next year…

TS: The skin up was by far the most challenging part of the competition. It was the hardest cardio workout I’ve done since I played soccer in high school. It was also tough because some of the people skinning up were able to literally sprint up the mountain. 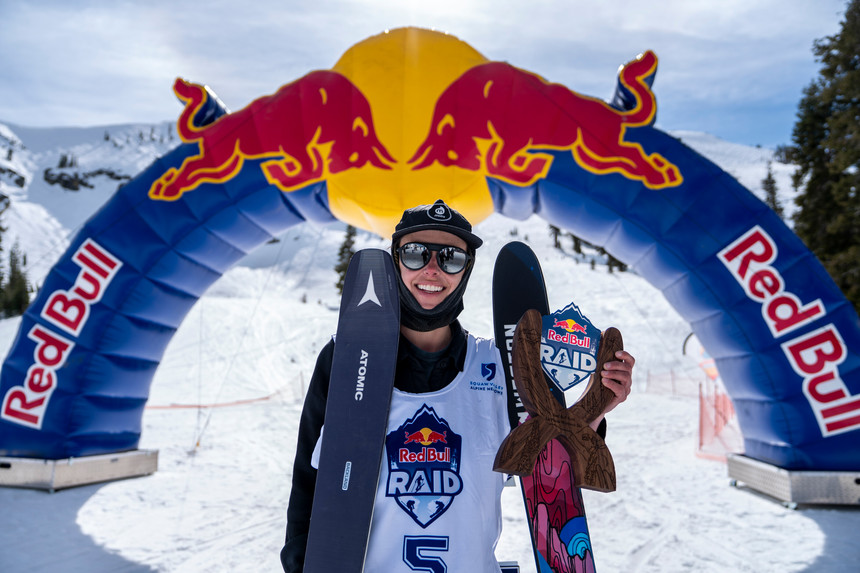 Camille poses with her prize winnings. For her and many athletes, the event was a welcomed return to some normalcy. Red Bull Content Pool photo.

What was your favorite part of the event?

CC: My favorite part was dropping in. It's been a long time coming since I heard my name announced in the start gate, and the count down to go time. It was an old familiar tune that brought a smile to my face.

TS: My favorite part of the event was crossing the finish line after my second run knowing that I had skied two successful lines, but most of all I was stoked that I didn’t have to hike up one more time.

I’d actually love to go to these Redbull events on skiing. I really love the sport and it must feel great to go to ane vent with like-minded people. Thanks for sharing this! Roofing Durham

I can’t believe I missed the Redbull event again! Ever since I started doing skiing and snowboarding 4 years ago I have always dreamt of attending this. Hopefully I can make it next time. Great review, thanks! Septic Repairs

Great event again by Redbull! I hope to participate in this event someday. Great post, Thanks for sharing! Tree Services Durham Great event Redbull! Thanks for sharing this post..
<a >ePub Conversion Services</a>

I’ve heard that Red bull’s skiing events are one of the toughest challenges out there for skiers. I’ve dreamt of going out there someday. Thanks for sharing this! Septic Replacement