Beautiful or deadly? On Monday, March 9th I was involved in a serious accident near Pemberton. I’m writing this from the hospital in Vancouver (day 4) where I’m hoping I can leave soon. After a couple of great runs, I eyed up this nice-looking pillow rib line and to my misfortune, up high on the run, I broke a pillow off that sent hard chunks barreling down the gulley I was planning on exiting. As I finished the line, the chunks redirected me through trees and smashed me onto the lake, burying me 120cm down. For minutes I lied under the snow, holding on to faith that my friends who were close by would come to my aid. They prevailed through my beacon being smashed into the “off” position (no signal) and with a lucky probe strike, dug me out quickly. Quickly realizing that I wasn’t ok, they called for Pemberton SAR and stabilized me, keeping me warm for 2 hours while we waited for rescue. My arm was the main concern, both bones in my forearm were shattered and displaced, as well as very unstable. I was coughing up blood and had chest pain. Hearing the helicopter come was an unexplainable wave of relief. I escaped with multiple forearm breaks (repaired by surgery) and a bruised heart, and some minor bleeding inside my lungs. I can’t thank the @tetongravity crew enough who was there that day, @ianmcintosh @christinalusti @bdanncreative @samsmoothy @aronasaurus1 @eparkerphoto_ I owe you my life. I also owe a huge debt of gratitude to the Pemberton Search and Rescue for the swift ride to the hospital, thinking about making my way out under my own power and adding many painful hours to my ordeal makes me feel ill. And a huge thank you to the wonderful @kelirwin for taking such great care of me these last few days, bringing my spirit up and making sure I was well fed and comfortable. Thanks to all who reached out and expressed concern. I’ll be back! In my opinion, a bit of a freak accident and I don’t think any poor decisions were made that day. A broken arm is a speed bump and I’m excited to heal up and ski again later this spring.

This past Monday, TGR’s Nick McNutt was caught in a serious event in Pemberton, British Columbia while filming with a TGR production crew. It’s the kind of news we’re never excited to share, but thankfully, he’s okay.

Unfortunately, a routine day of filming in the backcountry turned into a nightmare when McNutt broke off a pillow on a technical line. The chunks of snow fell down into the gulley he planned to exit and caught him while finishing the line. The debris carried McNutt, sending him through trees and smashing him onto the lake below where he was buried under roughly 3 feet of snow.

Thankfully, the film crew and team of athletes nearby dug him out quickly and kept him stabilized until a helicopter was able to transport him to a hospital in Vancouver. McNutt escaped with multiple forearm breaks, bruising on his heart, and some minor internal bleeding in his lungs. Reflecting back on the incident, he can’t pinpoint any poor decisions leading to the slide. If anything, it was a bit of a freak accident.

In a post reflecting on the incident, McNutt writes, “I can’t thank the TGR crew enough who was there that day: Ian McIntosh, Christina Lusti, Ben Dann, Sam Smoothy, Aaron Whitley, and Eric Parker. I owe you my life. I also owe a huge debt of gratitude to the Pemberton Search and Rescue for the swift ride to the hospital, thinking about making my way out under my own power and adding many painful hours to my ordeal makes me feel ill.” 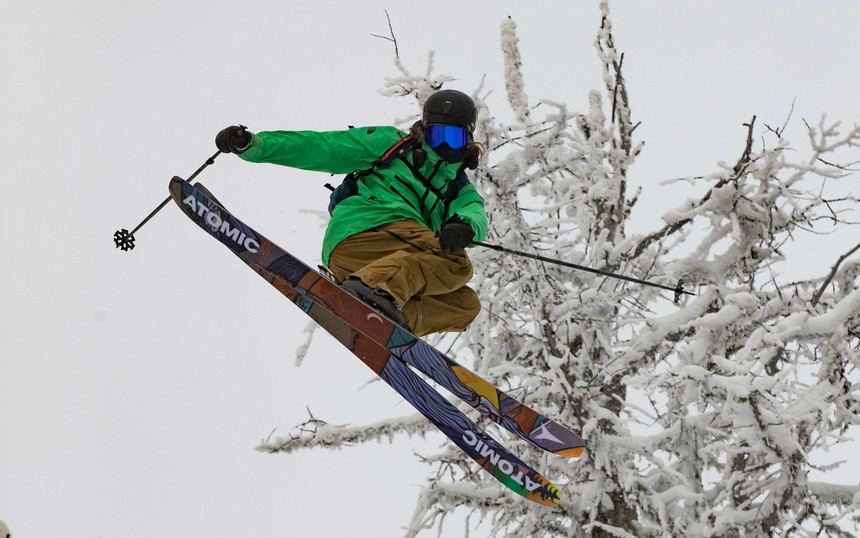 Nick McNutt assured everyone that he'll be back on two planks soon. Jeff Cricco Photo.

Cinematographer Ben Dann, who assisted in the rescue, had this to say about the incident:

"We had a close call in the mountains a few days ago. Nick broke a pillow loose while skiing a line and it hit him like a freight train as he aired into his exit. The big hard pillow blocks and loose snow raked him through trees and put his face down on a lake with 120cm of debris on top of him. Luckily the rest of the crew was close and able to react fast. We quickly realized that we didn’t have a beacon signal from him. It had somehow gotten turned off due to the impact of the tree. We know that for certain because we had done two transceiver checks that day. The debris pile was small in width but was four meters deep in spots. Longer than our probes. He could be anywhere. We all started probing in line with the tree that he hit. Right as Lusti was saying we need to start a proper probe line I grazed Nick. The feeling of the friend under the snow with a probe is unmistakable. After another probe, I had a proper strike. The shovels came out and we dug like hell.

We got to his pack first and then oriented where his head was and quickly got him an airway. He moaned, he was breathing, he was alive. As we continued to dig him out he became more and more with it and was able to articulate what hurt. He had a severely broken right forearm. We later found out he had some bleeding in his lung and a bruised heart, which intensified his shock. We got him out of the snow and tried to keep him as warm as possible and stabilize his arm. Thankfully, Search and Rescue responded quickly and was able to get him out of the field and into proper care. Thankfully, we had an amazing trained, educated and composed team out there that day. We saved a life even when the odds were against us. We had him out of the snow in five minutes and 15 seconds and in a hospital in two and a half hours. I’m so thankful for everyone in our crew and am happy to say that Nick will get to shred pillows again soon."

Despite the nightmarish experience, Nick McNutt assured everyone that he'll be back. Heal up bud, and we're glad you're safe!

It’s impossible to fully eliminate risk in the backcountry, which is why the TGR team trains each year to respond to incidents of this nature. Every winter the production team and athletes brush up on their mountain safety skills at the International Pro Rider Workshop (IPRW), which runs through similar rescue scenarios. For more information on how to stay safe in avalanche terrain, check out TGR's Safety Week series.

Sending best wishes and vibes to Mcnutt. This guy’s Almost Ablaze segment on youtube basically got me to switch from snowboard to skis.