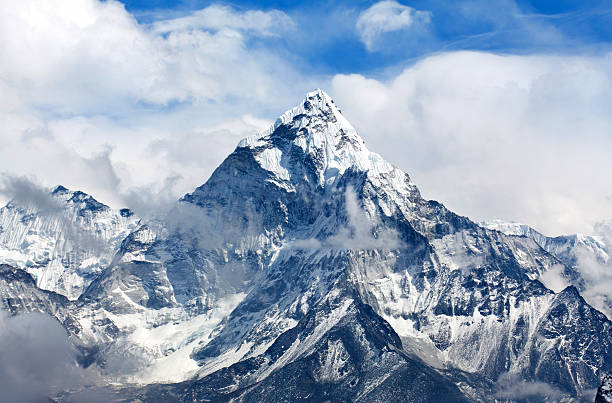 Some climbers will find a way to "reach" the summit of Mount Everest regardless if it's the truth. Istock photo.

Reaching the summit of Mount Everest comes with some serious bragging rights. I mean, who wouldn’t want to add the fact that they climbed Everest to their Tinder or Linkedin bio? The problem is making it to the top of the world is no walk in the park. Not everyone can handle the arduous 40-mile climb, so a few unscrupulous climbers have used alternative methods like photoshopping to achieve the feat. According to the New York Times, in 2016, two Indian climbers—Narender Singh Yadav and Seema Rani Goswami—faked their way to the infamous summit with some doctored images. The couple subsequently used the photos as proof to receive highly-coveted summit certificates from the Nepalese government, despite never stepping foot on the summit.

They almost got away with it, but their sloppy craftsmanship on the photos raised a few alarms. Veteran mountaineers quickly noticed a few concerning details. First, their oxygen masks had no tubes connecting back to their oxygen tanks. Second, their goggles were strangely absent of reflections of snow or mountains. Lastly, the most concerning sign was that the flags in Yadav’s hand were noticeably limp, whereas the Nepalese flag behind him was fluttering in the wind.

It turns out the real story is that the duo made it to the mountain's “death zone” at 27,000 feet, just 2,000 feet shy from the summit. But with their oxygen supply utterly depleted, they couldn't continue forward and had to be rescued from the mountain.

Their “achievement” didn’t come under question until last August when Yadav was selected to receive India’s most prestigious mountaineering award. The announcement outraged the Indian mountaineering community and Everest Sherpas, and they called attention to the discrepancies in the photoshopped images. It was such an outcry that it prompted a government investigation, confirming that the couple had indeed faked the climb. In response, Nepal is banning the two climbers from Mount Everest for the next ten years.

Fake summit claims like this one are nothing new for the mountain; in fact, they’ve been on the rise over the last decade. But if you’re going to try to photoshop your way onto Mount Everest, then at the very least, take a Masterclass or something. Or better yet, actually, climb the damn thing like everyone else. I am a person who enjoys trucking and always do trucking whenever possible <a href =“https://doescbdhelp.com/cbd-uses/different-skin-conditions-that-cbd-can-help-to-treat/”>the page here</a> and here they are sharing a story in which Nepal ban climbers who Photoshop the way to Everest Summit so it is really new information and I don’t know how many know about it

That’s a picture of Ama Dablam, which is on the way to Everest on the Nepal side.

Black Diamond Equipment has initiated talks with US Consumer Protection Agency to issue a voluntary recall on all Pieps DSP avalanche beacons, in a formal response to a design issue that can accidentally lead to the beacon switching out of transmit mode. The issue almost cost TGR athlete Nick McNutt his life in an avalanche accident last winter. On the commonly used Pieps DSP Ice, DSP Sport and DSP Pro, the switch that changes the beacon from off to transmit to receive can easily get damaged