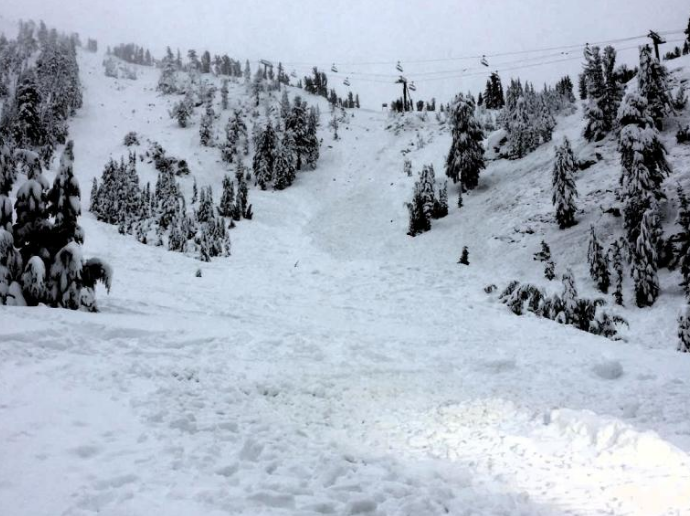 Looking up at the debris field. Andrew Pinkham photo.

A man died in an avalanche this weekend while skiing in a closed off area at Mt. Rose Ski Tahoe in Reno, Nevada. Search crews recovered the body of the unidentified male before 1 p.m. on Sunday, the Washoe Country Sheriff's Office tweeted. It's believed to be the body of a 60-year-old skier who went missing Saturday morning.

On Sunday, a rescue crew found the man's body in the debris of an avalanche that he and his partner had triggered while skiing in an area closed to the public due to high avalanche danger. The man did not have any avalanche safety gear on him.

From the Mt. Rose Avalanche Report:

Two skiers hiked/traversed into CLOSED uncontrolled terrain at Mt. Rose. This terrain had NOT BEEN OPENED, HAD NOT BEEN SKIED, and HAD NOT BEEN CONTROLLED this winter. It is more analogous to a backcountry snowpack. They decided to drop into a steep wind-loaded slope. The first skier triggered a large avalanche that swept him downslope and buried him 600-1000 ft. below in debris that averaged 5 ft deep and reached up to 10 ft. deep in some areas. The second skier immediately called 911 and the search for his partner continued for the rest of the day.

We at TGR are very sad to see this news.

We strongly encourage everyone to follow closed signs while skiing. If you do decide to travel in the backcountry, please make sure that it is with proper training and equipment. Ski safe out there.

Read more info on the details of the avalanche and a technical discussion here.