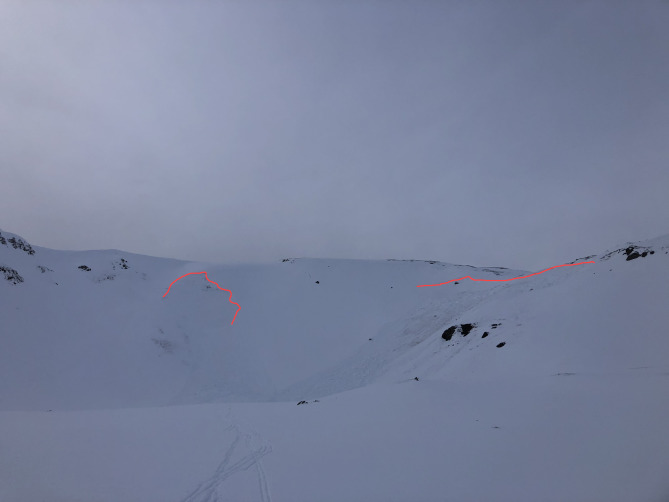 The red lines indicate the two crowns of the avalanches. The right avalanche was the first slide, which triggered the slide on the left. Colorado Avalanche Information Center Photo.

An avalanche on Colorado's Red Mountain Pass caught six backcountry skiers on Saturday as they participated in an avalanche safety course with the Silverton Avalanche School. One of the participants of the Recreational Level 2 AIARE Avalanche Course, Peter Marshall, did not survive the incident. According to The Durango Herald, the 40-year-old was buried under at least eight feet of snow, and while he was successfully retrieved by his group they were unable to revive him.

RELATED: Brush up on your backcountry skills with TGR

The tragedy marks the first avalanche fatality in Colorado this season, and the first for the Silverton Avalanche School since opening its doors in 1962. The school, joined by the Colorado Avalanche Information Center, is currently leading a full investigation into the incident. Jim Donovan, the Silverton Avalanche School director, has declined to further comment until the investigation is completed so that the reporting remains accurate.

There is a preliminary report available, which outlines that Marshall was caught in the debris of two avalanches in Upper Senator Beck Basin. The first slide was triggered by his group, which carried all six skiers down the slope. Then a subsequent avalanche was triggered sympathetically, and its debris piled on top of the initial debris field where Marshall was buried. The rest of the group aided by Emergency personnel was able to make its way to U.S. Highway 550.

The Colorado Avalanche Information Center hopes to have the full report released by the end of the week.

Who was the guide that made these poor decisions?

Nelson went missing just below the summit after skiing off the top on September 26. Separately on Monday, a large avalanche killed a climber and buried scores of others between camp three and four at around 7,450 meters. Three helicopters were mobilized to assist in rescue operations on the mountain. Nelson was one of the most prolific ski mountaineers of her generation, with over 40 expeditions and dozens of first descents including the first ski descent of Lhotse in 2018 and several other

During a large thunderstorm on the evening of Tuesday, August 2, a 22-year-old man was killed after lightning struck his tent in the Teton Wilderness. The man was camping near Enos Lake with a group of 14 backpackers, one of whom also sustained major injuries. Teton County Search and Rescue responded using the Teton Helitack helicopter, flying three rescuers into the site on Tuesday evening after the accident. Unfortunately, the patient could not be revived even after CPR was administered for

Yet another mountainside in the Alps has collapsed this summer due to extreme heat waves. This time, a massive rockfall above the Brenva Glacier on Mont Blanc destroyed the Bivouac de la Fourche, a tiny mountain refuge that granted climbers access to the wild side of the Alps’ tallest peak. TGR athletes Jeremy Jones and Xavier De Le Rue stayed at the refuge while filming for as they attempted to ride the North Face of the Aiguille Blanche de Peuterey. The mountains around Mont Blanc have