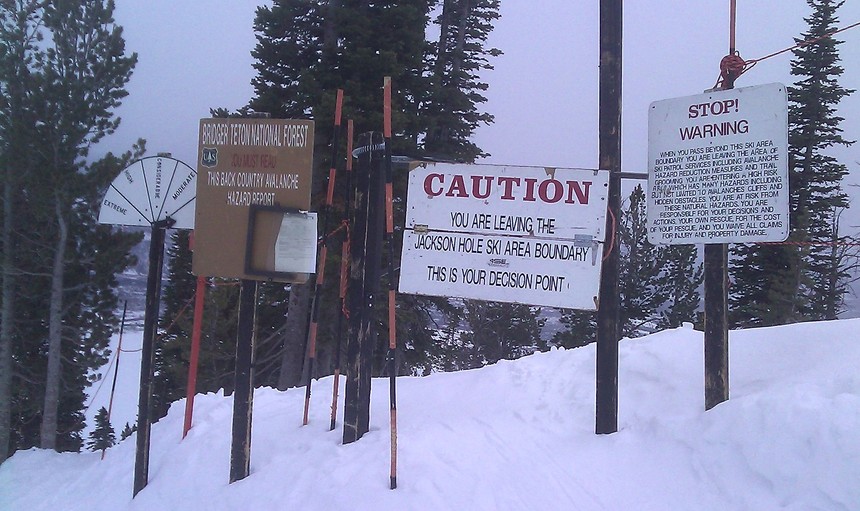 On February 28th, 2019, Jackson Hole Mountain Resort's backcountry gates were closed. Several feet of snow had fallen over the past few days, and avalanche danger was "High" at all elevations. In conjunction with the Park Service and Teton County Search and Rescue, JHMR briefly prohibited backcountry access via resort exit points.

That afternoon, a group of four ducked a rope off the Teton lift in search of fresh tracks in Granite Canyon. Two of the skiers successfully exited the backcountry, but the other two became lost and required rescue by GTNP rangers. The event ruffled local feathers, and the poachers were widely condemned. Weeks later, some rejoiced to hear that the skiers were likely to face charges.

While the other three skiers have chosen to fight the charges, Andrew Richards, a 24 year-old Jackson resident, pled guilty. He also asked that Jackson's Buckrail publish a letter which reads as both an explanation and apology for his actions:

"At approximately 3:45 pm on February the 28th, 2019 I made an incredibly impulsive and thoughtless mistake. This lapse in judgment, though only a few seconds in duration, cost hours of time, thousands of dollars, and most importantly put the lives of multiple people in grievous danger.

I chose to duck a boundary and ski next to the rope line that borders Jackson Hole Mountain Resort and Grand Teton National Park. Absolutely never, was it my intention to lead anyone under the rope, let alone Granite Canyon. I was under the impression that my riding companions were taking the Craig’s run to where we would meet at the lower entrance of Saratoga Bowl, as we had discussed before departing from the top of the Teton Chairlift.

Regardless of my intention, the following incident occurred and I take complete and solemn responsibility for the consequences of my action.

After making a handful of turns on the other side of the rope, I re-entered the resort onto Craigs. I looked back up the trail expecting to see my three companions making their way down the slope. As I had never skied with Ruth or Natalie and was not aware of their abilities, I paused to make sure they were doing ok.

Moments later, I watched as Ruth rode towards me, adjacent to the rope, and re-enter onto Craigs as I had done. It was at this moment that I realized Ruth had followed me under the rope and Joe and Natalie had potentially followed as well. After waiting for 2-3 minutes with no sign of the other two, I knew something had gone terribly wrong. Ruth and I made our way to the bottom, briefly stopping at the lower entrance of Saratoga Bowl, hoping that Joe and Natalie had skied ahead of us or taken a different trail to our rendezvous point.

Upon reaching the base I was able to make voice contact with Natalie from my cell phone. I asked if she knew where she was, to which she replied, “No, I think we are lost”.

Understanding both the severity of the avalanche danger & the terrain in which they must have entered, I immediately told Natalie not to move and for her to direct Joe to do the same. I then asked Natalie to send me her GPS coordinates, how much battery life remained on her phone, and to describe the steepness of their surroundings (relative to an in-bounds run). I then reiterated for them not to move and that I was going to Ski Patrol with the information they had given me.

I went directly to the Ski Patrol Station at the base of the Cody House where I turned myself in and provided as much information as I possibly could to aid the rescue effort. The rest of the narrative you will know from the official reports.

I was aware that having broken the law, I could face legal punishment, lose my job, and my employee housing as a result. However, I was determined to expeditiously rectify my poor decision with a series of decisive actions and absolute transparency, the result of which I prayed would save my companions.

I will never forget the moment, two weeks following the incident, when I saw Ranger Schuster enjoying a concert in the town square with his family. Amidst recalling the wonderful experiences I shared with my own father, it became profoundly apparent that the ripple effect of my action could have taken away a lifetime of these moments from another.

I have been advised by many to seek legal counsel and fight these charges in court as the others accused have chosen to do. However, it seems to me this would only waste further time and valuable public resources, of which I have spent enough already. I feel that it would be in the best interest of the community to take responsibility for my actions and live with knowledge I did everything in my power to right my wrong.

For these reasons I plead guilty to both Violation of Emergency Boundary Closure 36 CFR 1.5 (f) & Disorderly Conduct – Creation of a Hazardous Condition 36 CFR 2.34 (a)(4). It is my hope that this experience and whatever penalty I may face serves as a warning to others going forward."

It’s a rare thing in this day and age for individuals to take full responsibility for their actions and suffer the consequences. It seems that Mr. Richards might even be taking the hit for his mates, which takes his level of accountability perhaps even further than is reasonable. Either way, hats off to him. His level of contrition is unique and respectable. Chapeau. You are an honorable man Andrew Richards. This country needs more of you, people who admit their mistakes and take responsibility.

The Great American Outdoors Act promises billions to protect lands like these. Wikipedia photo. The Great American Outdoors Act is now law, paving the way for future generations to continue enjoying our parks and outdoor public lands for years to come. After passing with overwhelming bipartisan support in both the House and Senate, President Trump signed the bill into law yesterday. The Act, created by hard work from both parties, guarantees billions of dollars in funding for all manner