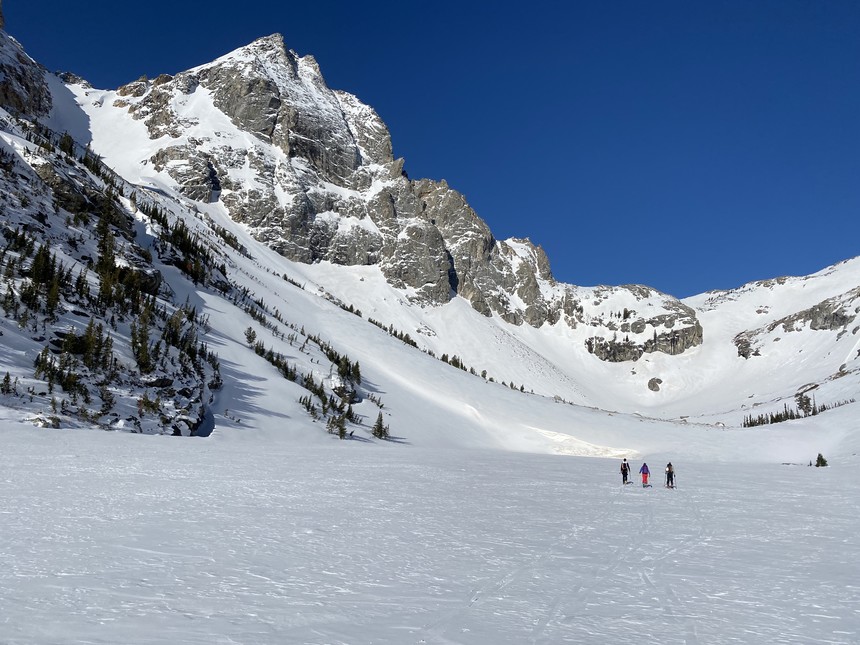 Much of the magic of skiing and snowboarding in the Tetons lies in the idea of traveling through and connecting with wild, remote places - which could be at risk with proposed new bighorn sheep closures. | Max Ritter photo.

Access to backcountry skiing and snowboarding in Grand Teton National Park and surrounding Forest Service lands is at risk. For those of you who enjoy spending your winters ski touring high in the Tetons, you might already be familiar with the issues winter recreation can create around bighorn sheep habitat. What you might not know, however, is that some of your favorite zones are likely on the list of recommended closures for GTNP and National Forest lands. Bighorn sheep in the Tetons face local extinction due to loss of habitat in the valley, climate change, hunting, non-native species competition, and disease, forcing them to spend the winter in extreme conditions in the high mountains. The number of sheep has dwindled to around 100 total over the last few winters. After a multi-year collaborative process with local community stakeholders, the Teton Range Bighorn Sheep Working Group (an interagency group of local biologists) has recommended a long list of actions that include targeted closures in popular backcountry skiing and ski mountaineering area including Avalanche Canyon, peaks in the northern end of the National Park, and on National Forest land surrounding Jackson Hole Mountain Resort and Grand Targhee Resort. However, only some data exists showing the direct impact activities like ski touring have on sheep populations. The proposed closures are wide reaching and, if implemented, will change the landscape of backcountry recreation in the Tetons for years to come.

In the 100-page document outlining the proposed actions, the TRBSWG outlined 202 ideas as potential solutions, and organized them by priority, potential benefit to the sheep population, and feasibility. For context, the ideas span the gamut from installing educative signs at trailheads, to targeted closures in known areas of habitat, all the way to removing Jackson Hole Mountain Resort (which scored a 0.0 on both the benefit and feasibility scales).

Currently, GTNP already enforces seasonal closures on parts of Mount Hunt, Prospectors Peak and Static Peak as part of a bighorn sheep protection plan. These closures have existed since the late 1990s and were based on the idea that winter recreation was causing harm to the sheep. Biologist  Alyson Courtemanch published a 2014 paper outlining the impact of backcountry recreation on the bighorn sheep population. Research has shown that the existing closures only protect 4 percent of the roughly 36,000 acres of “high-quality winter habitat” for the sheep. The new proposed management actions would expand protections to cover nearly 50 percent of that identified habitat. According to the TRBSWG document, the public identified 28,268 acres of “high value” skiing in Grand Teton National Park, 9 percent of which would be closed to human access during the winter if all the proposed management actions were implemented. In a nod toward the collaborative nature of the effort, many of the action items are about maintaining access to very popular areas like Granite Canyon, Garnet Canyon, Mt. Moran, Baldy Knoll, Taylor Mountain, Albright Peak, Wimpy’s Knob, 25 Short, and the East Faces above Jackson Lake.

Below are some examples of the proposed closures: 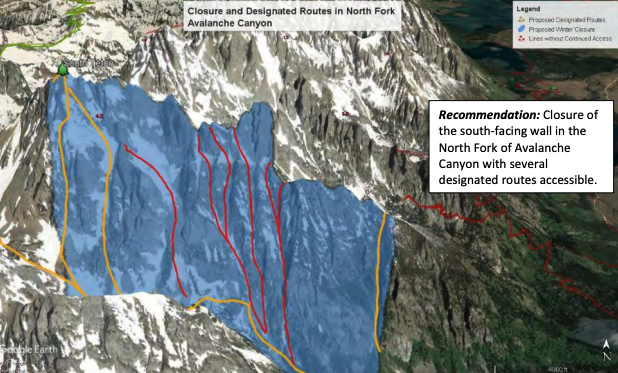 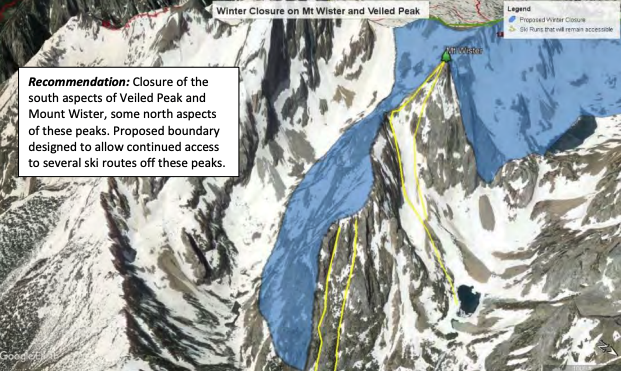 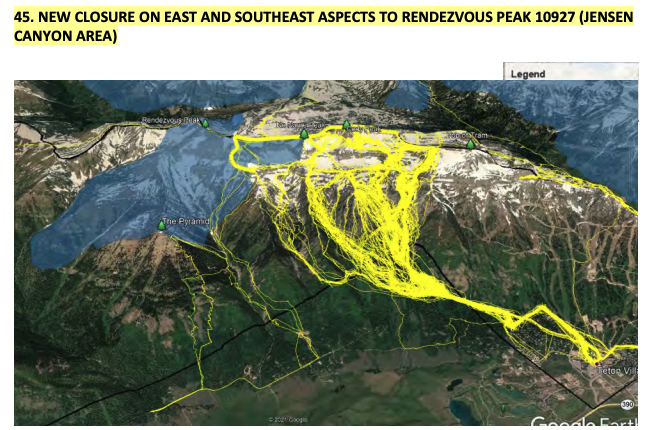 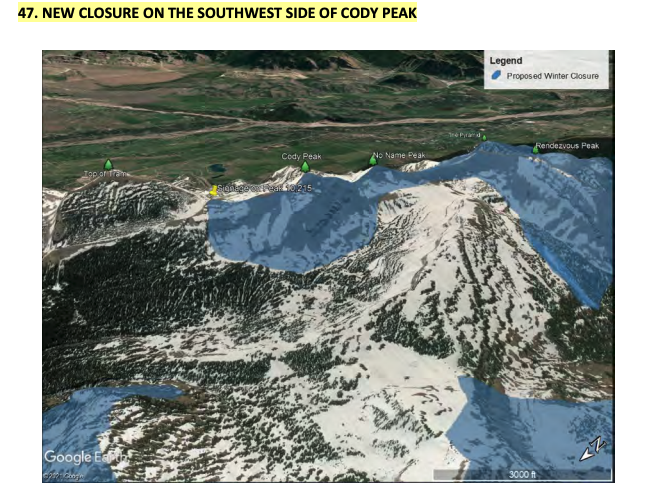 So then, what are the specifics of the proposed actions in terms of human access? High priority actions that would affect skiers the most include closures in northern GTNP in the Ranger/Doane Peak area, expanding the existing Mt. Hunt closure, closing access to the Snowdrift Lake area and The Wall, and installing signage at the entrance to the Banana Couloir.

Secondary priority actions include greatly expanding the closure on Static Peak, a new closure in the Veiled Peak/Mt. Wister area, closing the North side of Avalanche Canyon (preserving access to the Four-Hour Couloir and the Amora Vida and SE couloir, while classic lines like the Nugget Couloir and surrounding chutes would be closed), a closure in the Jensen Canyon area, and a closure on the backside of Cody Peak that could directly impact the heavily-used bootpack from JHMR.

The issues surrounding access were explored in the 2021 short film Denizens of the Steep.

Local stakeholders, including backcountry users and guides, are torn on the issue. On one hand, access to the activity that in large part defines the local culture is at risk and this process stands to set a precedent for even broader actions in the future, with arguments made that the proposed actions are misguided and ignore the reality of skiing and riding in the Tetons. On the other hand, many want to stay true to protecting the environment, local species and the wild nature of the lands we get to play on and are willing to give up access in the name of the greater good.

Jackson-based IFMGA mountain guide Jeff Dobronyi explains, “I'm concerned that these recommendations do not address the main impediment to the herd's survival and growth that the biologists identified, which is access to quality low-elevation winter range. By closing vast amounts of wild, high-alpine ski terrain to backcountry travelers, these recommendations heavily burden the ski community while likely doing little to ensure the long-term flourishing of the Teton Bighorn herd that we all love. The sheep don't want to be up high all winter, and by closing all this terrain from December 1 - April 30 every year, we're doing little to actually solve the problem, which is access to low-elevation winter range. That is a much harder problem to solve, so the ski community feels like we're being thrown under the bus because it's the easiest and most convenient option.”

IFMGA guide and longtime Teton local Zahan Billimoria says: “We have an inherent need to have a connection to wild places. That’s part of the necessity of humankind. When you start to separate humans from wilderness that’s a problem. We’re emotionally physically spiritually connected to it and have always been. The notion that GTNP – which already contains an airport and neighbors three ski areas - is going to stop humans from walking into remote places is a crazy idea. I believe people who are working on this are well-intentioned but these types of processes have become too academic and we’re forgetting about our own necessity as humans. We are not an intrusion on wilderness. If it comes to that point, that’s the demise of humankind and our inherent connection to wild places. Think about the next generation who have based their lives around being close or in these wild places, what will be left for them? Of all places in the planet this is the last we should even entertain an idea like this. That ship has sailed. Look at the reality of everything around it. Here's another point that's important to my heart. I’ve been a skier in this range for 18 years now and through my time here I’ve never seen anybody but young white people here until the last few years. Those barriers are just starting to break down. If you start to close access to these places then that journey of exploration and solitude is over. Ultimately this is about democracy. It’s about people using their voice to claim their own land. Ask yourself What is the purpose or national parks? Who are we protecting these places for? Start there and then use your voice.”

On the other side of the argument, filmmaker and backcountry skier Zach Montes (director of Denizens of the Steep) says: "Before these icons of the wilderness blink out of existence, we as a user group must examine our collective moral compasses. What is more important in the long term? Do we allow 50-100 individuals to access a few famous ski lines in the Tetons, or do we prioritize the stewardship of this endangered herd of animals. Ultimately, we humans are but visitors. The Teton sheep have nowhere else to go. Shouldn’t we be doing everything in our power to protect the places we love?."

Pro ski mountaineer and guide Kim Havell said in an Instagram post: "Compromise in a community is key for harmony as well as the best way to achieve the best results for all involved. I hope we speak up about the issues at hand but that we don’t attack the messengers. This is beneath us as skiers who aim to always operate in harmony with our environment. Those of us who ski are amongst the most privileged in the world. We can access nature, breathe clean air, and afford to enjoy the mountains and areas that many before us worked hard to protect. Because we are lucky, shouldn’t we also be grateful for what we have and work to help protect what makes it special. How much do we take before we give. If we want to protect our winters don’t we also wish to protect our wildlife. This should go hand in hand. Living next to a national park system, we benefit from and also believe in protecting our wild lands as they remain. We have an opportunity to help make a difference in the Tetons. Did we skiers cause the problem? Definitely not. Will development ever stop? Not likely. So, as skiers, it seems reasonable to me that we do everything we can to protect and preserve Mother Nature as best we can. Recreation is here to stay. Our population is ever growing. We have a chance now to work to save our planet with steps right in our own backyard."

The Bighorn Sheep Working Group could not be reached for comment.

The Working Group is hosting an online meeting this Wednesday 10/20 at 6pm MST with opportunity for public comment. (https://us02web.zoom.us/j/83184288165?pwd=SDRES0lSc2xxNG5QR0hKejM2aXZUQT09) Been skiing the Teton Backcountry since the 1970’s.  Still going strong.  I agree with the closures.  Selfish jerks regularly bring dogs, snow machines, firearms, and more.  They are there to party and self promote.  Wild life is living off of their stored fat from the previous summer and cannot survive multiple daily stressful encounters.

I think removing JHMR, Targhee, and the airport would go a long way to redressing some of the destruction of Jackson Hole. These industrial intrusions on our wild lands have been catastrophic.

Unfortunately, skiers are destroying the Teton Backcountry. If skiing regulations help wildlife conservation efforts, then I’m all for it. On the other hand, my company would like to donate $250 to help fight the issue. Do you have anyone I could get in touch with about a donation on behalf of my mobile detailing service?

Couldn’t agree more, and their destruction of the Teton Backcountry will probably lead to other consequences. - Kitchen remodeling Cheektowaga

This is a very extreme sport. Only for professionals.
AC Repair Lancaster

Great article. Skiing has always been something I want to try and I’m definitely going to travel to try it.
- William D., Concrete service Springfield MA