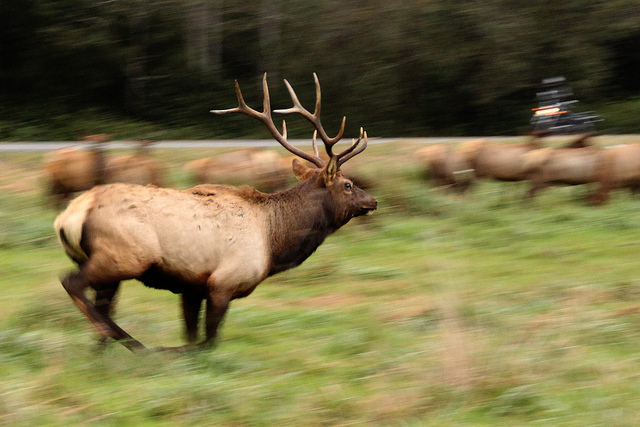 Park officials recommend staying at least 25 feet away from all animals. For elk, that's especially important during calving season when the mothers are more aggressive. Stacey Spensely/Flickr Photo.

On Sunday, a woman was seriously injured by an elk near the Mammoth Hot Springs hotel in Yellowstone National Park according to KTVQ. Per the report, the cow elk attacked the woman out of defense of her calves.

"The elk was protecting a calf bedded down roughly 20 feet away and hidden by other cars. It's not known if Ms. Triplett saw the calf or the elk prior to the encounter," park officials stated.

Charlene Triplett, 51, was kicked in the head, torso, and back by the 500-pound animal.

Triplett, who sustained significant injuries, was airlifted to a trauma center in Eastern Idaho for further treatment. The 51-year-old had been working within Yellowstone at one of the hotels and was off-duty prior to the attack. Per the Seattle Times, Triplett's condition is currently unknown.

Just as a friendly reminder: Now that the national park season is in full swing, it's wise to keep your distance from them. There is almost nothing beneficial that can come from coming into close contact with wild animals.