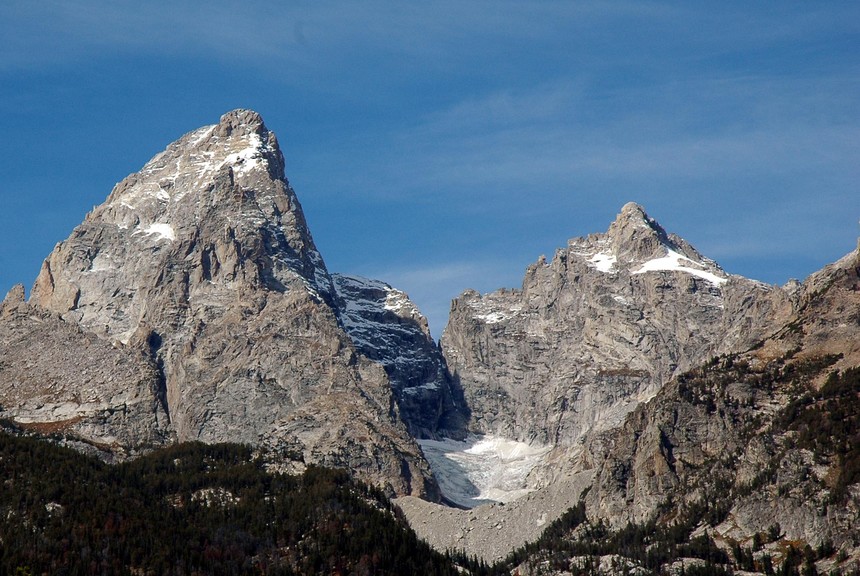 A climber was rescued out of a crevasse on the Teton Glacier on August 7. Wikipedia photo.

One thing many of us probably didn’t know was that Grand Teton National Park still has glaciers large enough to form crevasses. While they are far away from the most popular summer climbing and hiking routes, they still pose a threat as evidenced by the fact that a climber had to be rescued from a crevasse by park authorities on Friday, August 7 on the Teton Glacier on the north side of the Grand Teton.

According to a National Park news release, a 34-year-old Wyoming man named Tyler Willis and his climbing partner had successfully summited Mount Owen earlier in the day. Upon descending via the Koven Route and crossing the Teton Glacier, Willis fell approximately 30 feet into a narrow crevasse around 10:30 p.m. Luckily, two other climbers were in the area and used their satellite communication device to call for help before setting anchors and used a rope system to pull Willis out. He had been wedged in the crevasse for over an hour before being extricated and was suffering from severe hypothermia.

RELATED: Watch The Official Trailer To Make Believe on TGRtv

Park Rangers finally located the victim and his partners around 4 a.m. and provided medical care and re-warming treatment. A helicopter was called and pulled the victim and the three other climbers to safety around 8 a.m.

While crevasse falls are rare in the Tetons, this case illustrates the fact that if you are crossing glaciated terrain, no matter the size of the glacier, always carry proper safety gear including a rope and anchor material, and know how to use it.