This diagram shows the amount of rain that fell in California during the month of February. All that red is not good. NOAA Regional Climate Centers Diagram.

February is typically the wettest month of the year for California, this year was a different story. Much of the state failed to receive a single drop of precipitation. This extreme lack of rain and snow has made last month the driest February on record since 1864.

The main culprit for the drought has been this massive ridge of high-pressure air hanging out along the coastline. It’s basically taking storms intended for California and sending them elsewhere like Washington, Canada, or Mexico. So far this year feels like a complete whiplash from last winter, in which there were 24 days of snowfall in the Sierra compared to this year’s measly one storm day. This pendulum swing from dry to wet winters is what researchers argue to be the new normal for California. “It reinforces California’s historical record of having year-to-year precipitation variation that is the most volatile in the nation,” explained climate scientist Dan Cayan. Climate change will not only make these droughts more severe, but intensify the big storms we’ve seen in the past. 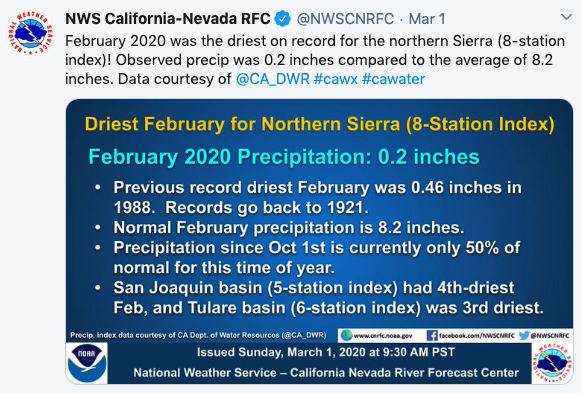 Check out the full tweet from the NWS here.

Not surprisingly, the Sierra Nevada snowpack—a critical water supply for agriculture and drinking water—has taken a huge hit. In a measurement taken at the town of Phillips, just a stone’s throw from the Sierra-at-Tahoe Ski Resort, the snowpack was found to be at 47% of average. The dry spell is quickly raising concerns for the upcoming wildfire season. Small bushfires have already been reported in San Francisco, thanks to July-like dryness in the region.

It’s not all doom and gloom. California is notorious for “ Miracle March” storms which are known to deposit several feet of snow in the mountains. A big storm is expected to offer some reprieve this weekend, hopefully aiding the situation.

This article is very instructive.  best cbd gummies The main challenges to sustainable development which are global include poverty and exclusion, unemployment, climate change, conflict, and humanitarian aid, building peaceful and inclusive societies, building strong institutions of governance, and supporting the rule of law.

UPDATE: A rescue on Teton Pass's Taylor Mountain is currently still ongoing by Teton Search and Rescue after a slide was reported yesterday afternoon. TCSAR received a distress call at 3:20 p.m. on Wednesday, after two snowboarders triggered an avalanche on the south side of the mountain at about 2:45 p.m. A partner beacon search was unsuccessful, and TCSAR responded in full force to try and locate the presumably buried victim. The search was called off at dark, and rescuers are resuming

On Tuesday evening, a magnitude 6.5 earthquake was recorded in Idaho, with an epicenter just north of Stanley in the Sawtooth Range. The earthquake occurred during a period of heavy snowfall and high winds, which had sent the avalanche danger to High. As a result of the quake, the Sawtooth Avalanche Center reported multiple large avalanches, including some from observers in Stanley that could hear them rumbling for up to a minute from town. RELATED: Now is Not the Time to "Try" Backcountry