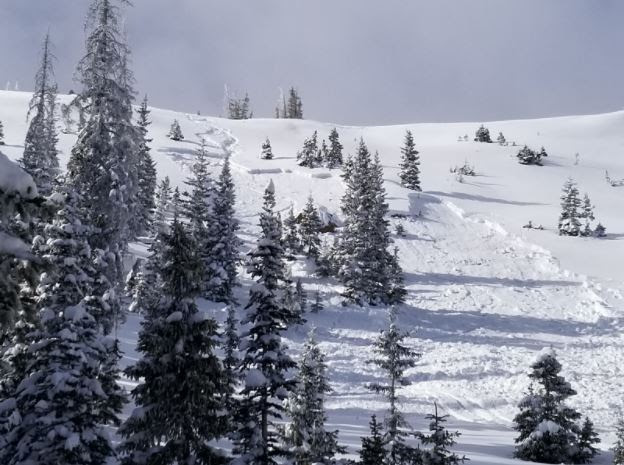 Since Friday three Coloradans lost their lives in avalanche accidents, and 132 avalanches were reported. CAIC photo.

The Colorado Avalanche Information Center is urging people headed to the mountains to exercise extra care in the mountains and pay special attention to the avalanche forecast. To put it bluntly, avalanche conditions are extremely dangerous right now, not just in Colorado, but all across the West thanks to recent heavy snowfall on top of a very weak snowpack structure. Please exercise more than your usual caution if you choose to travel in the mountains in the coming days. Even if you trigger a small slide, being dragged through trees or over rocks in the shallow early-season snowpack may leave you severely injured or dead. Since Friday three Coloradans lost their lives in avalanche accidents, and 132 avalanches were reported. One hundred and eight avalanches were triggered by people in the last week, according to CAIC Director Ethan Greene.

More people die in avalanches in Colorado than any other state, and this year conditions are especially dangerous. This is not the landscape-changing event we saw in March of 2019, but it is the weakest snowpack we’ve seen since 2012. People need to recognize we have unusual conditions and their usual practices may not keep them out of harm’s way. As we gain more snow in the coming weeks, avalanches could become even more dangerous. We urge everyone to check the avalanche forecast before you plan your day in the mountains, particularly as we enter the holiday season.

Here are the numbers:

In the last week: 380 avalanches reported, 108 triggered by people.

Why is this important?

There have been a lot of avalanches and a lot of people are getting caught in them. The snowpack is below average across the state. Avalanches are mostly small, but very easy to trigger. This week, we have seen avalanches grow in size and they are going to continue to get bigger as the mountains get more snow.

We have avalanches every year, why is this different?

Colorado is the home of weak snow and avalanches are not uncommon. This year is worse. We haven’t seen conditions this bad since 2012. Although the avalanche conditions are not unprecedented, they are worse than many people are used to. People are using avalanche-safety strategies that have worked in recent years, but current conditions require additional caution.

What can you do?

The most important thing you can do is check the avalanche forecast before you go into the backcountry. Go to www.colorado.gov/avalanche or get the Friends of CAIC’s mobile app. Look at the current avalanche conditions and plan accordingly. Steep slopes where the snow supports your weight are dangerous. Avalanches are easy to trigger. They can break wider than you expect. You can trigger avalanches from low-angle terrain, below or to the side of a steep slope. If you’re unsure about the conditions, stay on slopes less than 30 degrees steep that are not connected to steeper terrain.

information that is truly essential to everyone. thank you very much!
puzzle jigsaw

Professional academic paper writing services are not hard to come across for those in need of Top Academic Writing Services and academic writing services online.
https://researchpapers247.com/top-academic-writing-services/